Judge strikes down borough’s ban on renting to felons 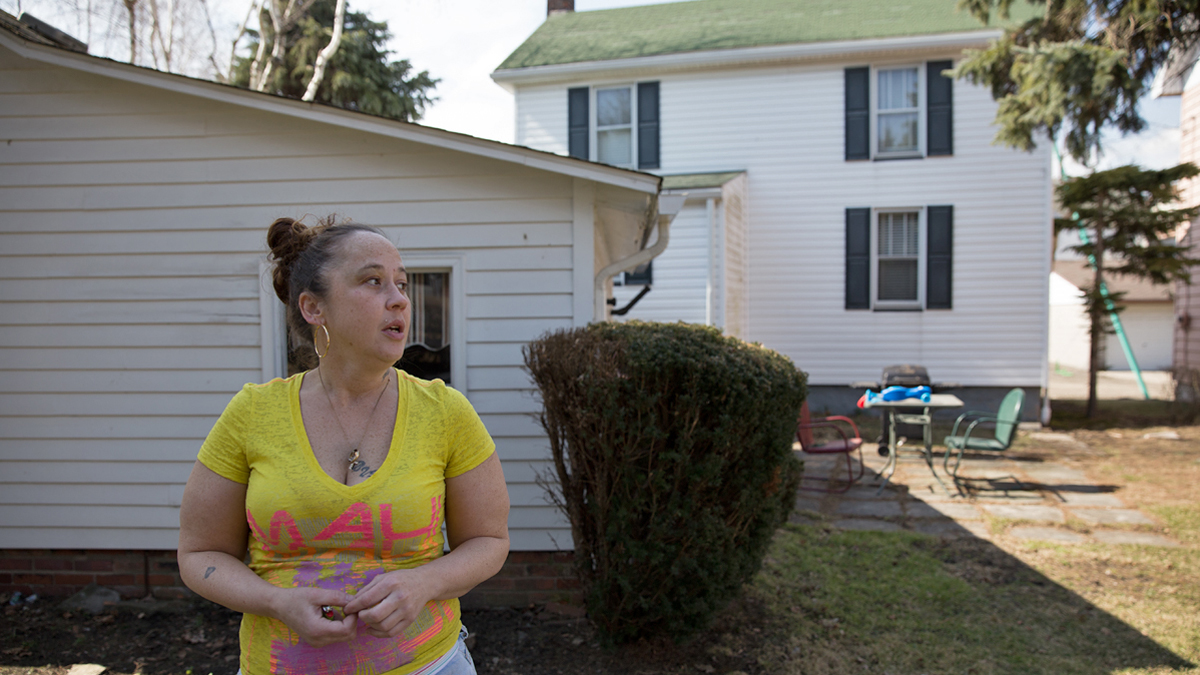 Darcy Smith outside her home in Gallitzin, Cambria County. She moved here from another apartment in the borough with her three children just after the local government enacted a ban on renting to people with felony drug convictions within the past seven years. A judge has since overturned that ordinance. (Lindsay Lazarski/WHYY)

(Ebensburg) — A Cambria County judge has overturned one borough’s prohibition against renting to drug felons because it’s pre-empted by state parole and leasing laws.

Smith, 38, filed her lawsuit two days after getting an eviction notice upon moving into a new home with her three children. She’d been living elsewhere in the Gallitzin since her release from prison over a year prior.

Bernstein’s decision didn’t address Smith’s claim that the ordinance is unconstitutional because it violates state and federal equal protection clauses.

Gallitzin is one of at least three communities in Pennsylvania where landlords cannot lease to people convicted within the past seven years of a drug felony.

Sunbury, Northumberland County, was the first to enact such an ordinance in 2012; Mifflinburg, Union County, passed one in February 2015.

Unlike Gallitzin, Sunbury licenses its landlords and its rules against certain ex-offender tenants apply to that permitting process. That might mean the Gallitzin decision doesn’t apply, noted Sunbury Mayor David Persing.

Persing said the Northumberland County city would review the ruling anyway, just to be sure, and tweak its ordinance if necessary.

“In past, it’s often just a couple words that make a difference, and we just change the language,” said Persing, reached on his cell while tending to the city’s softball fields.

Officials probably won’t get to it for at least a month, though, he said.

She wrote that landlords can’t evict tenants simply to comply with the borough’s rules because a criminal record isn’t one of three justifiable reasons laid out in the Landlord-Tenant Act: the lease expiring, tenant violation of its terms or nonpayment by the tenant. Aside from that, Bernstein sided with the defense’s contention that landlords attempt to follow state law and Gallitzin’s ordinance would face an undue financial burden. State law gives tenants the right to a hearing (absent in the Gallitzin ordinance) and requires at least two weeks’ notice for evictions – during which time, the borough could fine $1,000 per day.

“The state law that pre-empted the ordinance in Fross was not Megan’s Law alone, but the state Sentencing and Parole codes,” Bernstein wrote.

Gallitzin’s ordinance took effect at the beginning of this year, at the suggestion of Mayor Ray Osmolinski.

Reached at home Friday morning, Osmoliniski said he hadn’t seen or heard about the ruling. He declined comment until after reviewing it and consulting with Crotty, who was selected by the borough’s insurance carrier to handle the case.

Smith, who didn’t return calls Friday, wasn’t seeking any damages in the lawsuit.

Consolidating usually saves money, but not in this case