Corridor Counts series: In Allentown, two Latinos — one Republican, one Democrat — have a common foe: The Democratic establishment

Different motives fuel the fight against the city’s most popular party. 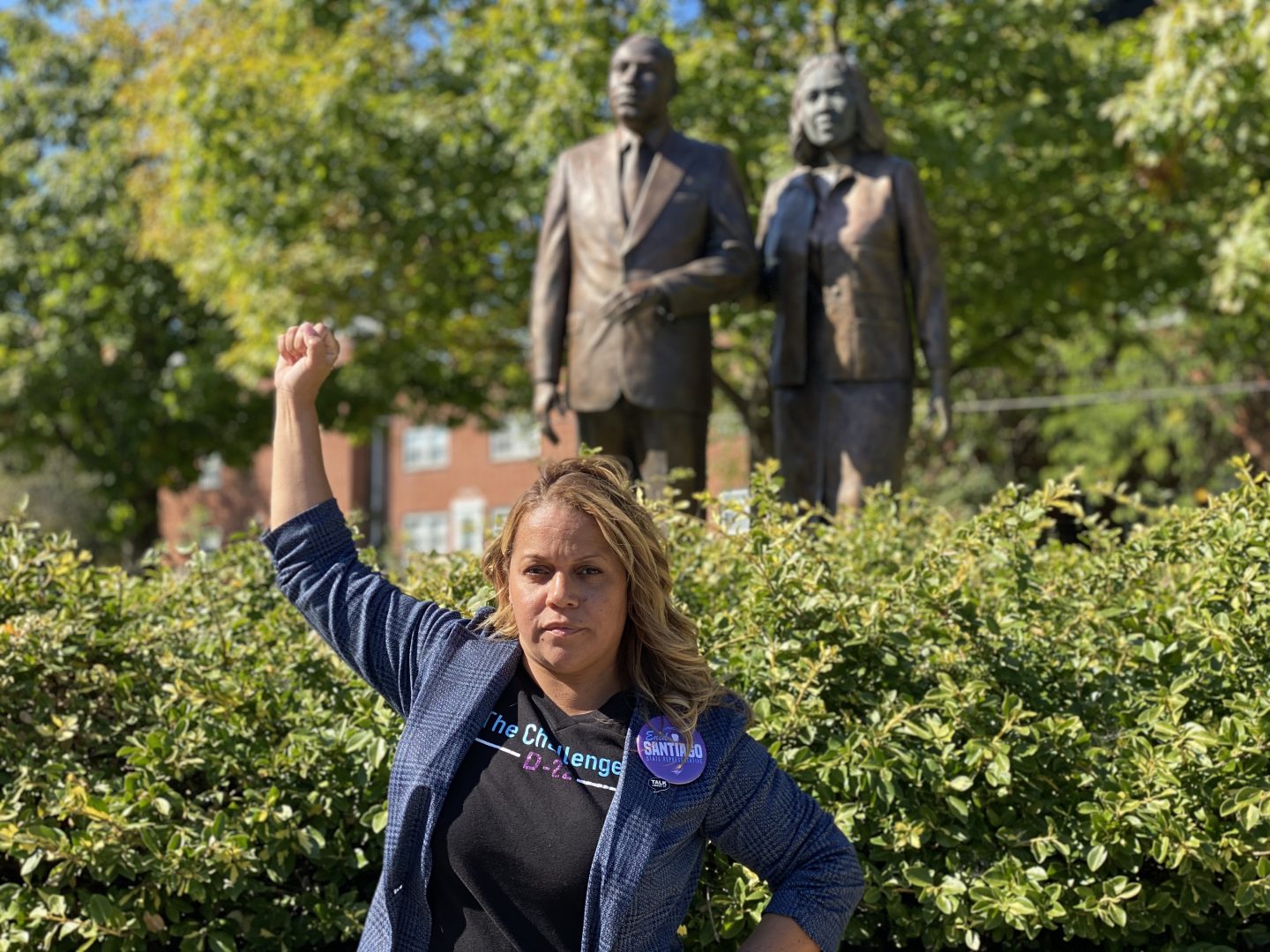 As part of our Election 2020 coverage, from our America Amplified initiative, WITF’s Anthony Orozco traveled the Route 222 corridor and has the story of two Latino politicos in Allentown — one a Republican and one a Democrat — who are going up against the Democratic establishment in the city.

This story has been updated to reflect Erika Bickford’s resignation as elections judge.

(Allentown) — In a cramped office in the affluent Trexler Park area of Allentown, campaign signs for local candidates and President Donald Trump make the small space even tighter.

Staff and volunteers warmly welcomed Tim Ramos, vice chair of the Lehigh County Republican Committee, as he entered the headquarters.

Ramos claims Democrats have lied to Black and Latino voters. To him, one of the biggest and widespread lies is that Republicans are inherently racist.

Pennsylvania is a fiercely competitive battleground state in this election. Just over half (52 percent) of Allentown is Latino. While Latinos more often register as Democrats — like everybody else, they are not a monolith. Many have deeply conservative beliefs.

A significant portion of President Trump’s Latino support comes from Cuban-Americans, who are traditionally conservative. And in states like California, for example, around one in three Latinos identify as conservative.

Ramos said there are plenty of Latinos in Allentown who are going to vote for Trump (some of them, a second time). 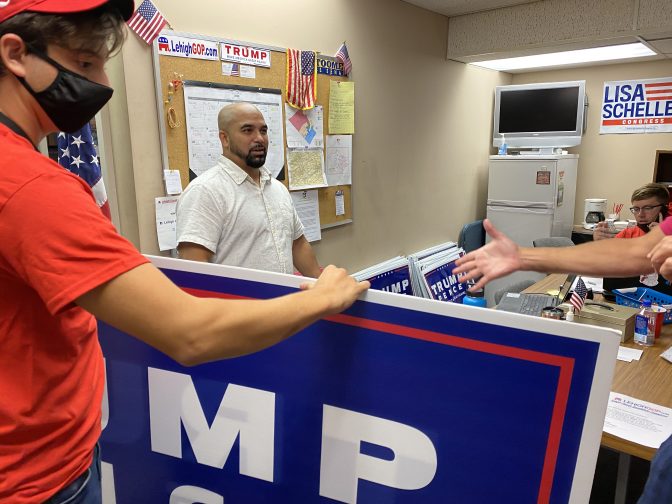 Tim Ramos, the vice chair of the Lehigh County Republican Committee, is greeted to GOP headquarters the by staff and volunteers.

For too long, Ramos says, Democrats have been in control of urban areas and Allentown in particular. He ran an unsuccessful mayoral campaign in the city last year, losing the special election by a wide margin to Democrat and former Interim Mayor Ray O’Connell.

He takes the position that a Republican vote in Allentown is a vote against a legacy of corruption.

O’Connell was appointed interim mayor in March 2018 after Democrat Ed Pawlowski was convicted on a slew of felony charges related to a pay-to-play scheme. The crimes also entangled Reading’s former City Council President Francis Acosta and former Mayor Vaugn Spencer, Democrats who were also convicted for their participation.

Ramos also noted Democrat Enid Santiago, candidate for the state House seat that represents the city, is going up against her own party.

Santiago challenged Democrat and incumbent Representative Peter Shweyer for the 22nd District seat in the June primary. Schweyer won by only 55 votes, according to certified results.

Not only was the election close, but it was also rife with accusations of negligence, polls opening late and voters being denied their right to vote.

“Many Latino voters have two last names,” Santiago said. “They were not putting the hyphen in the middle, so it was not showing up as if they were registered to vote.”

“They were simply turning them away,” she said.

Santiago alleges Judge of Elections Erika Bickford openly supported Schweyer while working the polls and that she, along with an election official, witnessed Bickford tampering with ballots.

Bickford says she darkened ballot selections of some voters and also trimmed a number of ballots. She now faces misdemeanor charges for altering around 30 ballots that day.

Lehigh County District Attorney James Martin said it is a unique case in his more than two decades as D.A. Though Bickford faces possible jail time and fines, Martin said the issue may be resolved if she resigns.

“One of my objectives in bringing these charges is to have her resign her position, because I don’t think she’s equipped to do it,” Martin said. “And if she were to do that, these charges could be disposed of in a diversionary program.”

Martin noted his office did not find evidence Bickford changed any votes or created any fraudulent ballots.

UPDATE: Bickford resigned from her post at the urging of Martin, according to The Morning Call. Bickford is still set for a Jan. 5 formal arraignment for the alleged crimes, according to court documents.

Since the charges were filed, Santiago says public support for her among her party’s leaders has remained nonexistent.

When her own party did not speak up for her, others did.

Despite the primary loss, Santiago is not backing down and has continued her campaign as a write-in candidate. She is the sole challenger to Schweyer.

On his website, Schweyer supports an increase (though not a doubling) of the state’s $7.25-an-hour minimum wage, and reversing Allentown School District’s budget cuts in recent years; and he proposes a study of income inequality across the commonwealth. 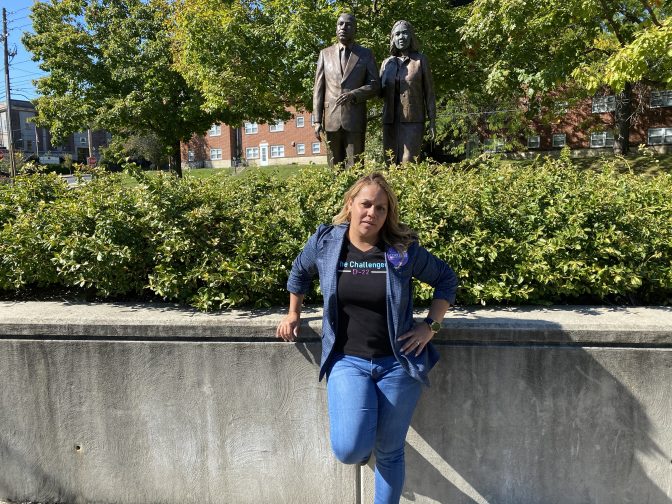 Santiago characterizes herself a progressive Democrat who wants to implement criminal justice reform, increase the minimum wage to $15, have equal funding for public schools and make housing a human right.

Santiago said she knows a write-in campaign is an uphill battle, but is going to see the election through as a message to voters.

“If this happened in Allentown, this is happening everywhere. However, nobody is speaking up, people are afraid,” she said. ”And those that are speaking up are being shut down by those that have a louder voice, which is why we need to unite those voices to make sure that we stop voter suppression on marginalized communities.“

Both Ramos and Santiago, on two different ends of the political spectrum, are calling on urban Black and Latino voters to challenge the status quo.

They both say they are fighting for people of Allentown, and part of that battle is overcoming their community’s complacency with the Democrats in power in this general election.