Corridor Counts series: She could lose her home. She can’t vote. But, she says, ‘I am an activist’ for this Reading community

The election affects not only Americans, but also millions of immigrants. One mother in Reading is doing what she can to change her community. 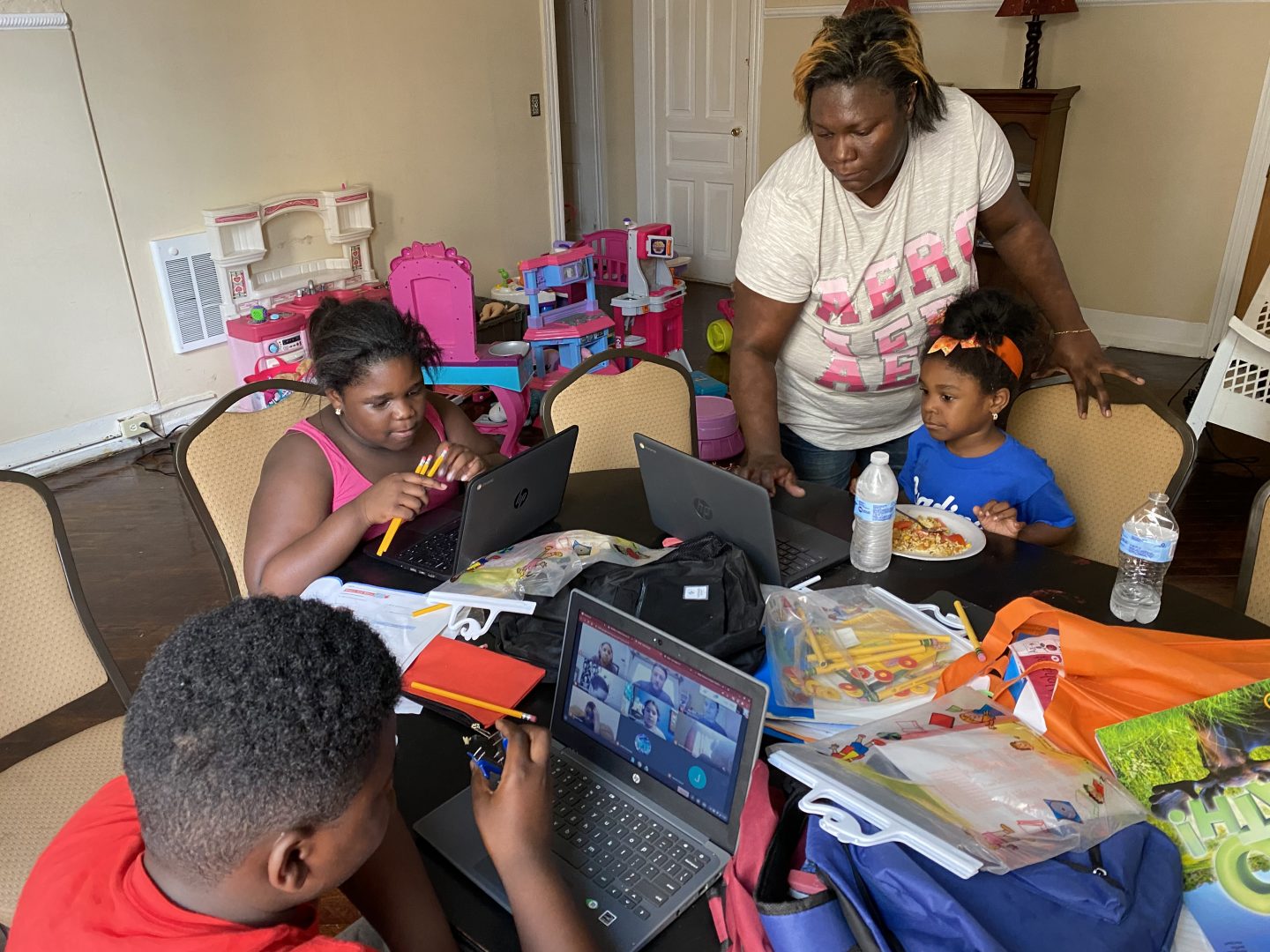 As part of our Election 2020 coverage, from our America Amplified Initiative, WITF’s Anthony Orozco traveled the Route 222 corridor and has the story of an immigrant mother of three who is trying to make a life for her and her children in Reading. She cannot vote in the election but the outcome will affect her nonetheless.

(Reading) — From the moment she wakes up, Migreldi Lara’s days are a whirlwind.

Her three young children are attending class in the Reading School District online during the coronavirus pandemic. So, home is part daycare, part school.

In the slivers of time she can step out of the home, she works odd jobs.

Lara came to the U.S. Virgin Islands in 2002 from the Dominican Republic. After landing in New York, she and her children moved to Reading last December.

Nearly 1 million immigrants are estimated to live in the state. Nearly half are not naturalized, according to U.S. Census estimates. Lara is among the 426,000 immigrants in the state who cannot vote.

She said she settled in Berks County because it offered cheaper rent and a better space for her children. At first, though, she lived in a packed apartment with her cousin.

Lara picked up work at a nearby salon, while her kids went to school. In mid-February, she moved into a new apartment a block away from the salon. Even alone, with her husband deported to the Dominican Republic 2012, the $750 rent each month was well within reach.

Then the salon closed in early March.

“We were super happy and then….Bam! The pandemic came,” she said. “I had to stop working because it closed; it closed a week before the governor said to close because she wanted to protect her employees and clients.”

Lara is not yet a permanent resident of the U.S. — and is in the country on a work permit. She has a social security number — with which she filed taxes last year. Through this, she and her children qualified for $2,700 in federal stimulus money.

“It helped me a lot because with that I paid the light [bill] because [the utility company] didn’t give me help at that time, I didn’t know there was help to pay the lights,” Lara said. “I paid a hundred and something for the lights. And the rest went towards rent, I was left with like $50.” 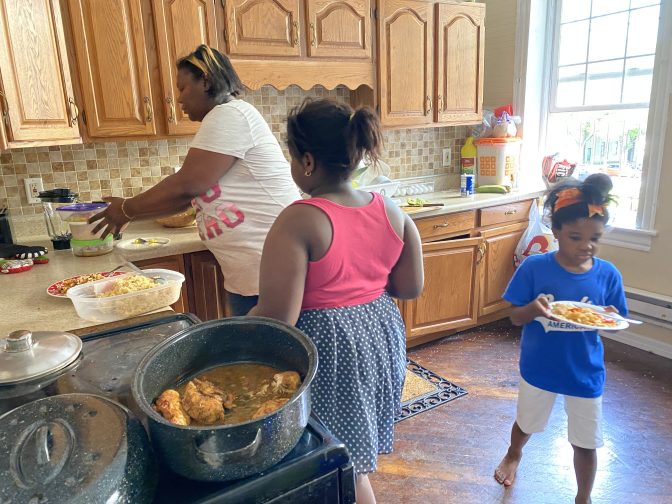 But Lara did not receive any unemployment benefits because she believed that she was not eligible. When she eventually learned she may have qualified, the six-month window for her to apply had already passed.

She does receive food stamps for groceries and has found intermittent work cleaning the homes and kitchens of neighbors, which helps some with daily expenses.

Since she is not a citizen, she cannot vote, But, Lara said she knows she can still exert a little influence in her community. She’s an activist, she said.

Lara teamed up with Make The Road Pennsylvania, a large and influential immigrant rights organization that has an office in Reading. She is an active member of Make The Road’s Comite de Padres. It is a group of Reading School District parents who advocate on behalf of Latino, immigrant and Spanish-speaking students and families.

Lara and her landlord, Roberto Jimenez, both attended a “Cancel The Rent” event held by Make The Road in early September. The organization called on the governor and federal lawmakers to extend eviction prohibitions during the pandemic. 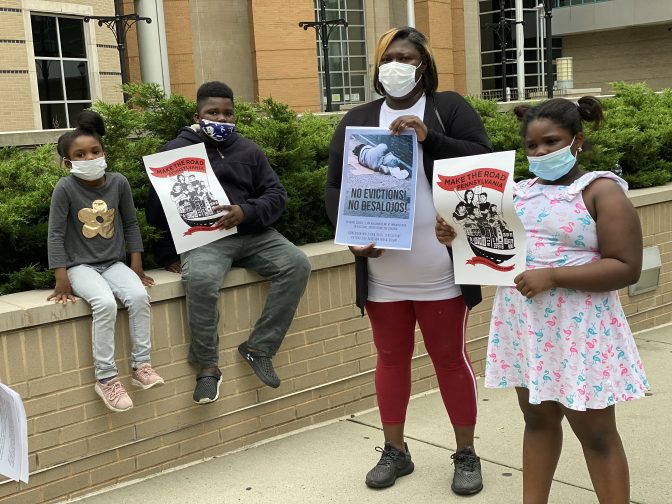 Migreldi Lara and her three children join Make The Road Pennsylvania outside of the Berks County Services Building.

To her, it was a chance to share her story and help others in similar situations.

Soon after the event, the Centers for Disease Control announced a ban on evictions. It is a formal process that both renters and landlords have to participate in to keep people affected by the pandemic in their homes.

Lara and Jimenez have decided to go a much less formal route, with a handshake agreement. That means she is allowed to stay in the apartment as she works on paying him the back rent she owes.

Jimenez said his association with Make the Roads is born out of his interest in social justice issues and that he could not in good conscience simply evict a single mother of three.

“I don’t force her to pay the rent because when she was working she was always up to date,” Jimenez said. “But she still hasn’t been able to find work.”

A part of the deal is to allow her to try to find sufficient work to pay rent. But with practically no options for childcare, Lara must stay at home with her kids as they attend school virtually.

“To throw her out on the street with three kids is not easy,” he said.

The outcome of the election could have wide-ranging effects on Lara’s ability to find work, as she forges her own path to citizenship.

If she could vote, she said she would be motivated by three big issues.

“With health, I don’t ask for anything for free,” Lara said. “No, but an insurance that everyone could afford, that’d be perfect.”

She also wants better teachers in schools and better discipline procedures to keep kids on the straight and narrow.

Another is she wants to see fair treatment for hardworking and law-abiding undocumented immigrants who have skirted the law to enter the country illegally. It’s one that hits close to home since her husband and the father of her children was deported from the U.S. Virgin Islands.

“When they do immigration raids, what time do they do them? In the morning, at six in the morning when everyone is a worker leaving for work,” Lara said. “Why don’t they do it at six in the afternoon or five or eight at night when the clubs are full of bad people?”

Having faced challenges over the last few months, Lara appreciates how helping hands have made it possible for her to survive throughout the pandemic.

To her, the country can only overcome its problems if people work together with everyone thinking of their neighbor.

Corridor Counts series: In Allentown, two Latinos — one Republican, one Democrat — have a common foe: The Democratic establishment