An election worker fills out paperwork at Harrisburg's 6th ward at the Susquehanna Art Museum, on June 2, 2020. Poll workers across the state were issued face masks to help stop the spread of coronavirus.

Your 2020 guide to voting in Pennsylvania

This year’s general election is going to have uniquely complicated logistics, and local, state and federal officials are still hashing out exactly what it will look like.

(Philadelphia) — This year’s general election is going to have uniquely complicated logistics, and local, state and federal officials are still hashing out exactly what it will look like.

This is Pennsylvania’s first general election to operate under a law that dramatically expanded mail-in voting beyond the usual absentee ballot option. June’s primary election already gave the commonwealth a preview of how popular the option would be amid the pandemic, and November’s election will bring even greater numbers.

There are also several voting issues that have yet to be fully resolved in the state legislature and in various courts.

For one, lawmakers are debating whether to allow counties to start pre-canvassing ballots — that is, beginning to process and get ready to count them quickly come Election Day. The Pennsylvania Supreme Court ruled on several items, such as upholding the use of ballot drop boxes, allowing ballots postmarked by when the polls close to count if they arrive within three days, and removing the Green Party candidate from the ballot for not following protocols. The ruling also rejected mandating counties to count ballots returned without a secrecy envelope. A federal lawsuit that was put on hold while the state courts resolved several items is no longer paused. That suit would revisit whether drop boxes could be used and the secrecy envelope requirement, among others.

Pat Christmas, policy director at the good government group Committee of Seventy, said all this has made for a difficult “summer of uncertainty” that might last into the fall. But he added, voters should remember one thing: Even though this year is unusual, they can trust the process.

Elections, he said, are affected by all levels of government — but the people who are really in charge of protecting the sanctity of the vote aren’t anonymous bureaucrats in Washington D.C.

Here’s the first thing all Pennsylvania voters should know: If you want to cast a ballot in the commonwealth, you have to register by Oct. 19.

You can do it online within a few minutes using this portal. You can also register through the mail by filling out this form and sending it back to your county election office — you can find a list of addresses and phone numbers for those here. Plus, you can register in person at your county office, at a PennDOT driver’s license center or at a list of other state-run offices.

Anyone can register to vote, so long as they will have been a U.S. citizen for at least 30 days before the election, are a resident of Pennsylvania and are going to be at least 18 by the election.

People who are incarcerated for felonies can’t vote under state law, but people serving time for lesser charges or out on probation, parole or house arrest are eligible.

The above links also work if you need to update your name or address or want to change your party affiliation.

If you’re not sure if you are registered, the Department of State has a lookup toolyou can use to check. Just enter your name, county, zip code and date of birth, or your driver’s license or state ID number, and you’ll be able to see your registration details, which legislative districts you live in and where your polling place is. 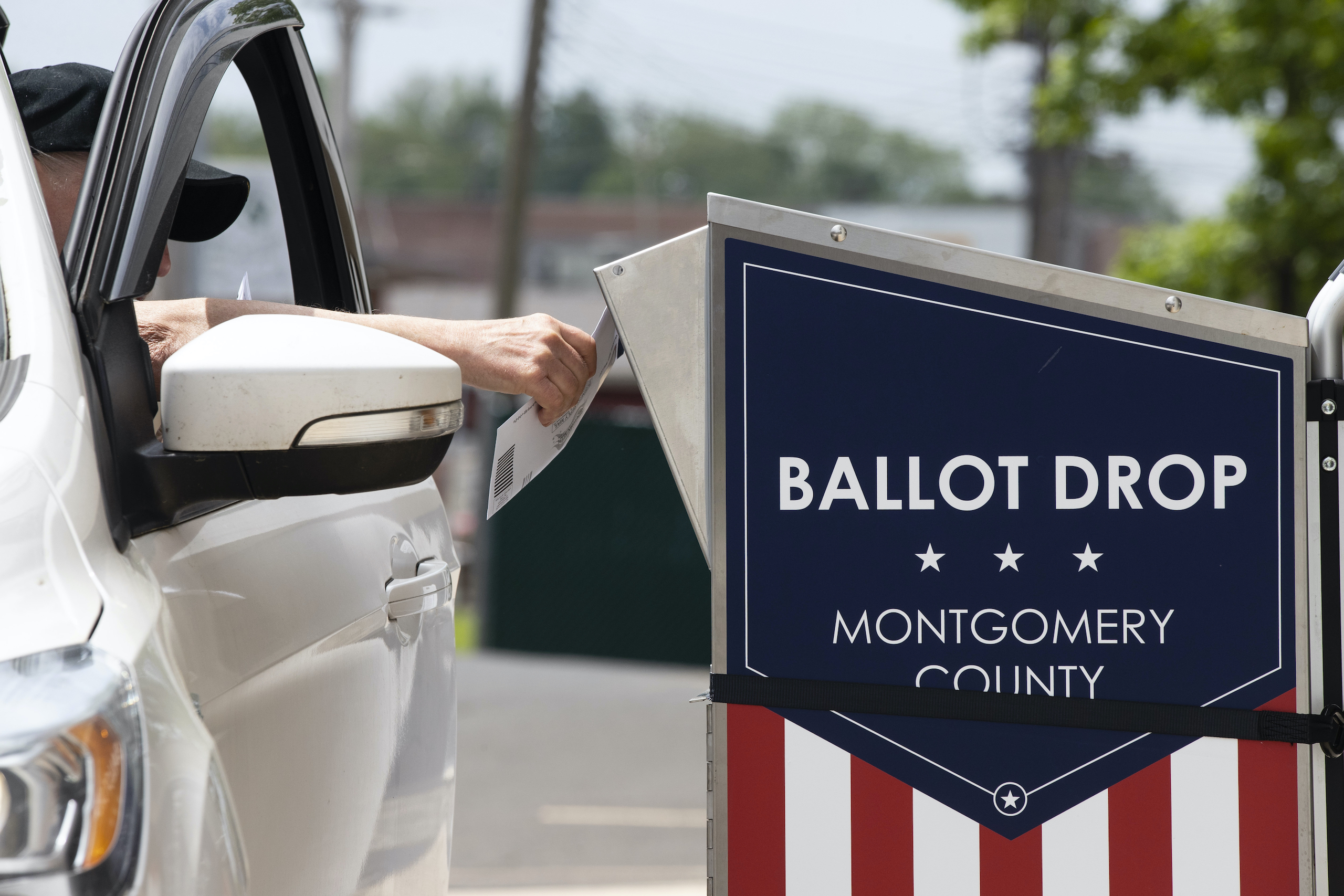 A voter drops off their mail-in ballot prior to the primary election, in Willow Grove, Pa., Wednesday, May 27, 2020. (AP Photo/Matt Rourke)

Pros and cons of in-person and mail-in voting

By now, you’re probably aware that thanks to COVID-19 risks, many local, state and federal officials are encouraging voters to cast ballots by mail, instead of in person.

In-person voting is, of course, still an option. Unlike June’s primary, which had temporary rules in place that cut down on in-person voting locations, polling places won’t be consolidated in November, barring some unexpected action by the legislature.

Counties have struggled to wrangle enough poll workers, and are still finalizing all their polling locations. But for voters who don’t have major health concerns and don’t want to deal with a mail-in ballot, in-person voting is perfectly viable.

Mail voting is safer, but it too comes with its own drawbacks. The key one is speed.

Thanks to the pandemic — and, some would argue, federal restructuring — the U.S. Postal Service is running more slowly than usual.

USPS officials have recommended that voters mail their ballots no later than seven days before the election, which they say is enough time to be confident the ballot will make it back to the county election office in time.

That is not, however, a timeline that works particularly well with Pennsylvania’s election laws.

State law dictates that voters can apply for mail-in ballots — by submitting a request online, sending this form to the county election office, or going in person to the office to request one — through 5 p.m. on Oct. 27.

That’s seven days before the election. Since the ballot would typically have to be sent to the voter’s home, there are real questions about whether it’s possible for voters who apply by the state’s deadline to mail their ballots back in time.

As a consequence of the state Supreme Court ruling, ballots must be postmarked by 8 p.m. on Election Day and received at county election offices by 5 p.m. on Nov. 6.

In deference to USPS guidance, state and county officials are urging voters to return their mail-in ballots well before the deadline.

“The message right now is apply early and return the ballot early, as soon as you’re confident in your candidate choices,” Pat Christmas said.

If you don’t have your ballot in the mail seven days before the election, you aren’t out of luck. The state recommends not mailing ballots that close to the deadline, and instead looking for a place to drop it off in-person.

You can always submit it at a county election office, but since there’s only one per county, that can be a time-consuming task depending on where you live. Some counties, like Philadelphia, plan to add additional offices. And many are planning to use secure drop boxes where voters can submit their ballots.

While the recent court ruling upheld drop boxes, the Trump campaign suit to ban their use is still unresolved, and GOP lawmakers are pushing a bill that would effectively get rid of them. 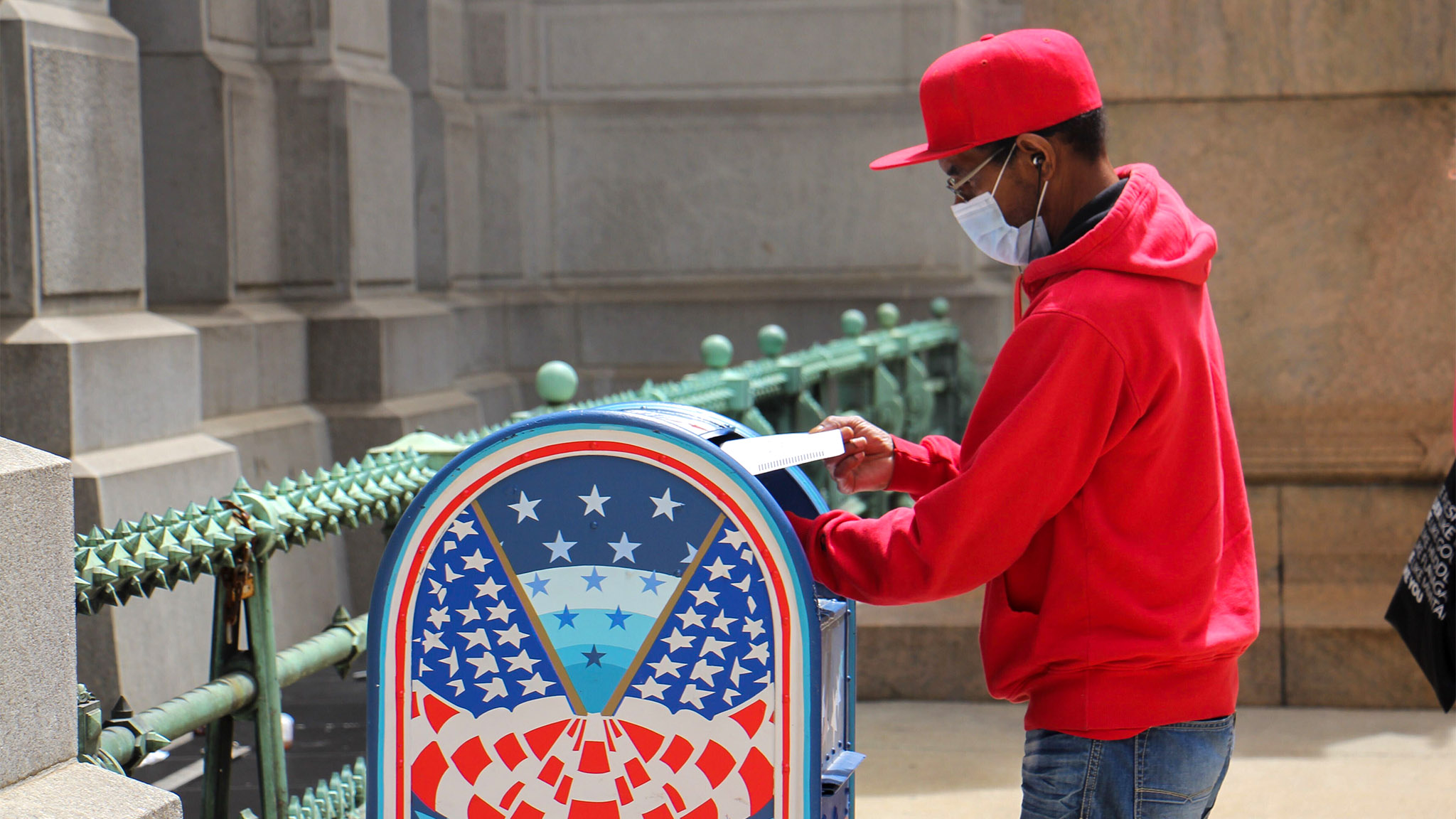 A voter places his mail-in ballot in a box outside City Hall. (Kimberly Paynter/WHYY)

When is my ballot coming?

Counties and the DOS initially estimated ballots would start going out around mid-September.

They were waiting for the state Supreme Court to rule whether Green Party presidential candidate Howie Hawkins should be on the ballot. Now that the court ruled he should not be included, it clears the way for ballots to be printed and distributed, but county election officials have not yet said when they will be able to start mailing out ballots.

It’s not ideal, Christmas said. Record numbers of voters have applied to vote by mail — Christmas estimated 300,000 in Philadelphia alone, so far — and he noted, they’re getting “awfully anxious.”

The best thing voters can do, Christmas said, is stay on top of the process and “sit tight.”