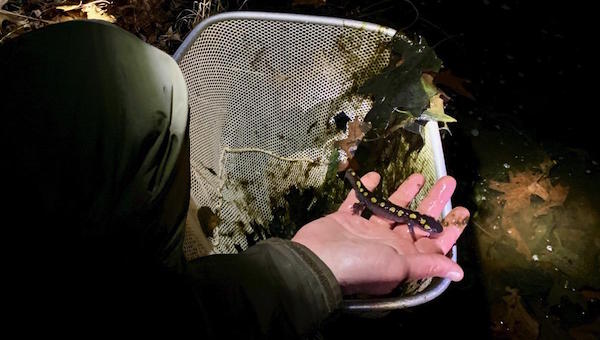 On a recent spring night, Jim Julian took a group through the woods on a path cut by power lines in search of vernal pools and the creatures that live there in the spring.

“What I’m going to ask is that if, when you’re walking, take a look with your flashlights,” he said. “Make sure you’re looking on the ground, because this is the time of the year these animals are migrating, and we may actually see them en route to our pond.”

Each year, ponds of water form in winter and early spring and dry up in the summer. These vernal pools are crucial to animals including frogs and salamanders.

An assistant professor of biology at Penn State Altoona, Julian has been leading the ClearWater Conservancy tours of these vernal pools for about 15 years. He said there are about 50 different pools in the Scotia Barrens and neighboring Haugh Family Preserve in Centre County.

Each year, ponds of water form in winter and early spring and dry up in the summer. These vernal pools are crucial to animals including frogs and salamanders.

As we made our way in, Julian told the group to listen.

“Those are our wood frogs,” he said. “You’ll hear these guys calling back and forth, and occasionally you might hear that high pitched – whee, whee – of the spring peeper.” 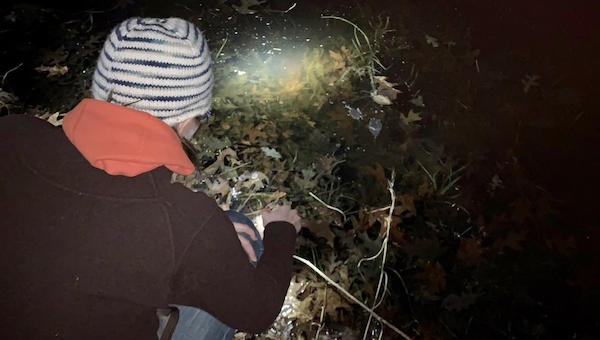 Julian said that once there’s a snowmelt and the temperatures are above 40, the animals leave where they’ve been hibernating to find the same pool year after year.

At the pond, Julian told us to fan out, without getting our feet in the water. That’s because the salamanders and frogs could be in the leaf litter.

“If you put your flashlights out into the open water you’ll get some eye shine back from the male wood frogs when they come up above water to call,” Julian explained.

The frogs heard us at first and quiet down. So while we were waiting for them to resume their serenades, the salamanders made an appearance.

Julian said it’s the first time he’s caught a Jefferson at the pond. It’s longer than a spotted one, but not as hefty.

The vernal pools, he noted, also have a rich array of aquatic insects including diving beetles and small crustaceans called fairy shrimp.

It didn’t take long for the frogs to start calling again.

With a splashing noise, it sounded like Julian had found a frog. 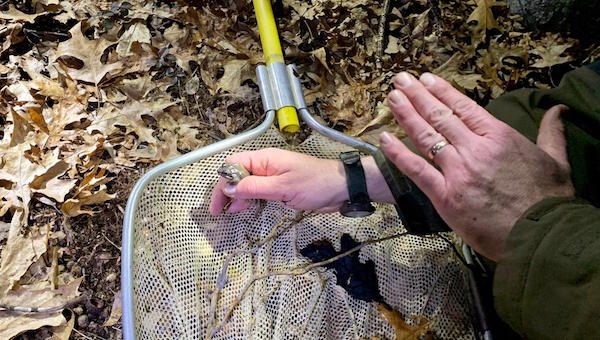 Jim Julian, an assistant professor of biology at Penn State Altoona, holds a small frog during a March 2019 tour of vernal pools in Centre County. Vernal pools are temporary ponds that provide breeding grounds for some species of frogs, salamanders and other animals. (Anne Danahy/WPSU)

“Listen,” Julian said. “What you’re hearing from everyone else is their typical mating call. Because they get worked up, occasionally a male wood frog will end up amplexing and grabbing another male wood frog. So, what they have is what’s called a release call, which tells them ‘Hey, get off my back, I’m not who you’re looking for.’ If you can hold them just right … a slightly different vibrating call, which tells you that’s the wrong guy.”

(He was careful to return all the animals to the spot they came from. And, he noted, if you have lotion or perfume on your hands, you should not handle the animals.)

One animal you won’t find in a vernal pool is fish, which is good.  They would make lunch out of the other animals’ eggs.

Suzy Yetter is conservation projects coordinator at ClearWater Conservancy, which offers the field trip each year.

“One of the biggest challenges with vernal pools is they are ephemeral. They’re temporary and they tend to be very small,” Yetter said. “People completely overlook them. They don’t know that they’re there.”

That means someone could build on or around one without even realizing it. But, even with the development, the frogs and salamanders will want to take the same path. That means crossing roads and developments. 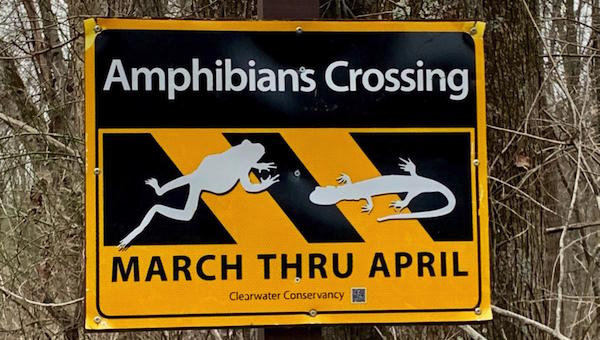 A sign in the Scotia Game Lands in Centre County reminds visitors to be careful and keep an eye out for amphibians. In the early spring, they travel from the woods to the vernal pools, temporary bodies of water, where they mate. (Anne Danahy/WPSU)

Yetter said another challenge is that someone having a mosquito problem might blame a wetland or vernal pool and spray it with pesticides or herbicides. But, taking out the predators — salamanders and caddisflies — will likely make the problem worse.

“They may appear to be these isolated little aquatic islands, but they’re very important pieces of the landscape,” Yetter said. “And it’s important to understand how to manage them for habitat, how to keep them connected to one another and to other natural areas on the forest. And to make sure that if you’re going to conserve a vernal pool, that you also focus on the uplands surrounding that pool.”

But, vernal pools and the animals they attract are part of the food chain. As amphibians dine on the invertebrates in the vernal pool, they too become food for other creatures.

Nicole Daulerio, of State College, was one of the people on the outing. She said the frog chorus was one thing that stood out.

“Oh my gosh. I couldn’t believe how it started off as one, and then everyone else joined in,” Daulerio said.  “That was amazing to hear that.”

While there were plenty of frogs and salamanders at the vernal pool that evening, they don’t stay for long. Once they’ve bred, they return to the woods. Until next year.