Pittsburgh Steelers quarterback Mitch Trubisky (10) slips the tackle of Cleveland Browns safety John Johnson III (43) and dives for the end zone for a touchdown during the first half of an NFL football game in Cleveland, Thursday, Sept. 22, 2022

Mitch Trubisky, Steelers’ offense bog down in loss to Browns

Pittsburgh managed just 54 yards on its first three possessions in the second half. 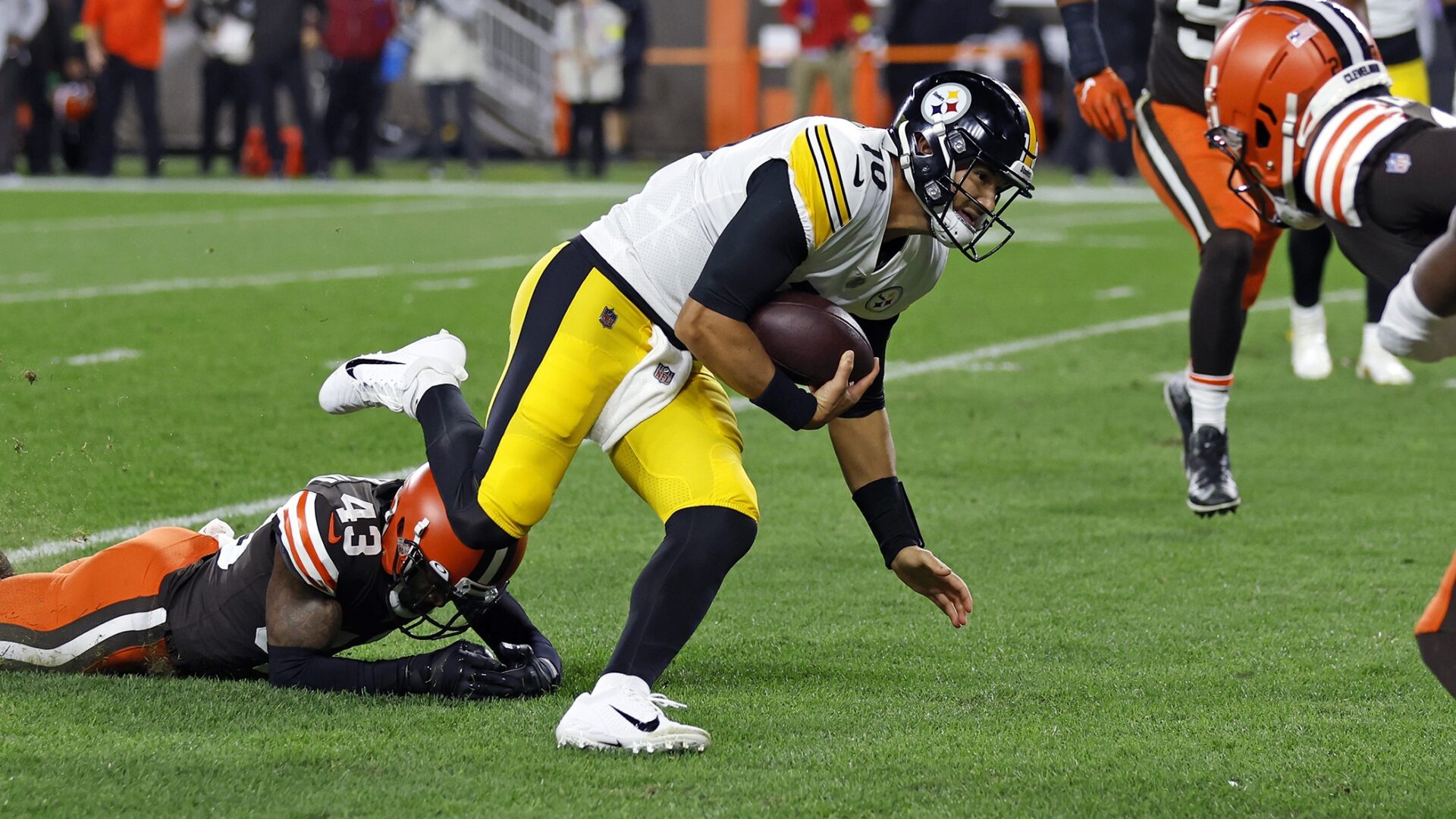 Pittsburgh Steelers quarterback Mitch Trubisky (10) slips the tackle of Cleveland Browns safety John Johnson III (43) and dives for the end zone for a touchdown during the first half of an NFL football game in Cleveland, Thursday, Sept. 22, 2022

Mitch Trubisky promised he’d be more aggressive and was, testing Cleveland’s secondary with some long throws and moving Pittsburgh’s offense effectively in the first half.

Now he’s got to put a complete game together.

Trubisky showed some signs of breaking out of an early season funk before bogging down after halftime as the Steelers lost 29-17 to the Cleveland Browns on Thursday night.

For 30 minutes, Trubisky looked good. He moved well in the pocket, stretched the field with some deep balls and had the Steelers (1-2) leading by a point at half and looking to hand the Browns (2-1) their second loss in four days

However, Pittsburgh managed just 54 yards on its first three possessions in the second half.

“We’re getting there, just not where it needs to be,” said Trubisky, who finished 20 of 32 for 207 yards. “We didn’t hit on the plays we needed to in the second half. Scoring three points in the second half isn’t going to do it for us.”

Trubisky didn’t make any major mistakes, showed some nice mobility on rollouts, most of them to the right and away from Browns star defensive end Myles Garrett, and ran for a score in the first half to put the Steelers ahead 14-13.

He was good, just not good enough to win.

Still, Steelers coach Mike Tomlin plans to stick with Trubisky, who was named the starter in training camp over rookie Kenny Pickett and will likely hold onto the job until there’s an injury or complete catastrophe. 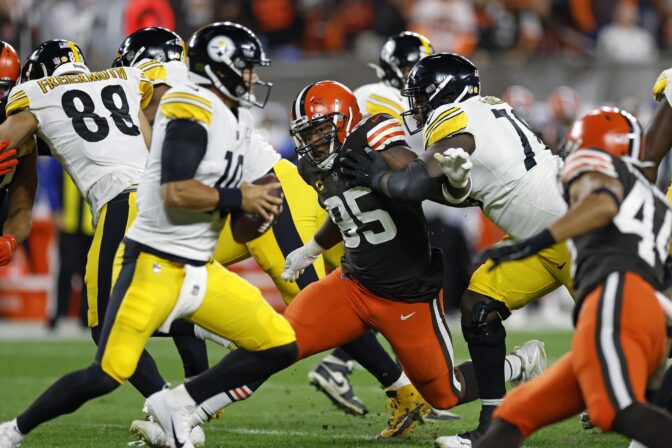 Tomlin was asked if he’s considering any major lineup changes for next week.

“I’m not in that mindset,” said Tomlin, who was not specifically asked about his quarterbacks. “I’m interested in reviewing this tape and looking at the totality of it and figuring out how we collectively get better. I will answer that question definitely no.”

More troubling to Tomlin was the Steelers went just 1 of 9 on third-down conversions while the Browns were 6 of 16, picking up several first downs on sneaks by quarterback Jacoby Brissett.

“They made the plays,” Tomlin said. “In the significant moments, they made it. They were in manageable possession downs. A lot of third down and short. That is usually a high probability for conversions when you’re that short, and really that is kind of the story of how it unfolded over the last 30 minutes.”

Following last week’s loss to New England, Trubisky took some heat for not looking for receivers down field. That wasn’t the case against the Browns, as he connected in the first half with rookie George Pickens, who made a sensational, one-handed catch for 36 yards — the Steelers’ longest play this season.

“We took some shots downfield, and that’s something we’ve got to come through with,” he said. “We’ve got a lot of playmakers. When the ball is moving and we’re scoring, everybody is happy. As an experienced player, you need to keep your head in the game because your time could come at any moment.”

“My confidence in him has always been at its highest,” Claypool said. “He threw a ball downfield and he was putting the ball where it needed to be. I do not remember a time when he made an inaccurate pass. So, he did his job.”

On defense, the Steelers didn’t put enough pressure on Brissett, who had too much time. Pittsburgh’s without T.J. Watt, the NFL’s reigning Defensive Player of the Year who is out with a chest injury.

But tackle Cameron Heyward wouldn’t use Watt’s absence as an excuse.

“The offense did some things right in the first half,” Heyward said. “We just didn’t give them enough possessions.”

It was homecoming for Trubisky, who grew up in Northeast Ohio. He would have loved to take down the Browns.

“It was really cool,” Trubisky said. “Nice to be back home, felt very welcoming. It meant a lot to be playing in front of a lot of my family and friends, but we’ve got to come out with a win.”

Following the game, Trubisky swapped jerseys with Browns running back Kareem Hunt. The two have known each other since they were youngsters.

“We go way back,” Hunt said. “Elementary school, Pee-Wee football, middle school, high school, basketball. I always wish the best for him. He’s a heck of a player and a friend of mine even though we went to different schools.”