Pennsylvania state Sen. Doug Mastriano, R-Franklin, a Republican running for Governor of Pennsylvania, meets supporters at a campaign stop Tuesday, May 10, 2022, in Portersville, Pa. Republicans are openly worrying that Mastriano, a leading candidate in the crowded GOP field in the race, is unelectable in the fall general election and will fumble away an opportunity for the party to take over the battleground state's executive suite. (AP Photo/Keith Srakocic) 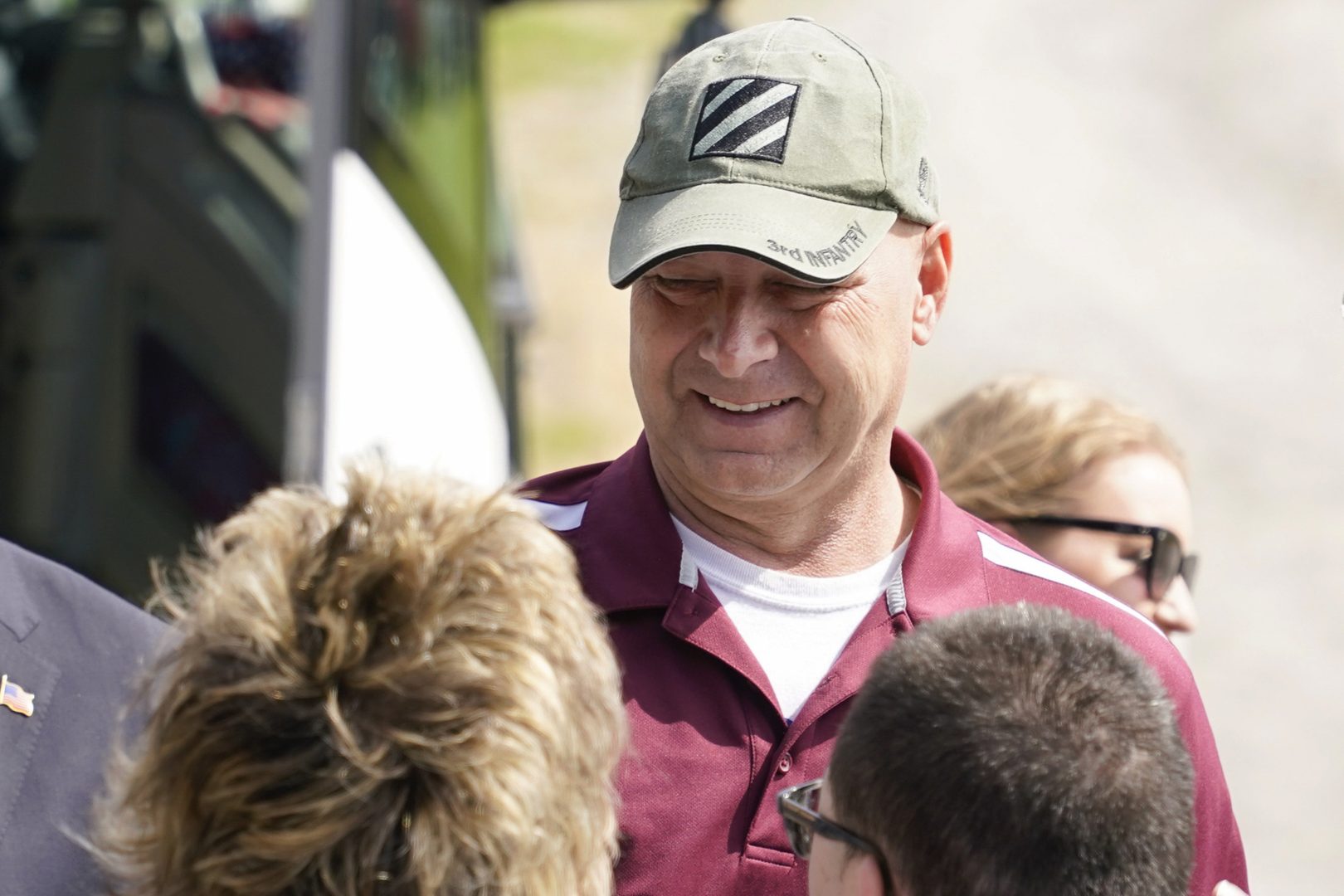 Pennsylvania state Sen. Doug Mastriano, R-Franklin, a Republican running for Governor of Pennsylvania, meets supporters at a campaign stop Tuesday, May 10, 2022, in Portersville, Pa. Republicans are openly worrying that Mastriano, a leading candidate in the crowded GOP field in the race, is unelectable in the fall general election and will fumble away an opportunity for the party to take over the battleground state's executive suite. (AP Photo/Keith Srakocic)

Pennsylvania’s Republican nominee for governor, Doug Mastriano, has offered to sit for an interview with the congressional committee investigating the Jan. 6 attack on the U.S. Capitol and was interviewed by FBI agents last year about it, his lawyer said Thursday.

Mastriano, a state senator and retired U.S. Army colonel who won the GOP nomination for governor last month, was seen outside the Capitol on the day of the insurrection, and he was in regular communication with Donald Trump as the then-president sought to reverse his 2020 election loss to Democrat Joe Biden.

Mastriano’s lawyer, Timothy Parlatore, said Mastriano told the FBI that he did not know about a planned insurrection or any coordination behind the Jan. 6, 2021, attack on the Capitol.

“He previously was approached and sat for a voluntary interview with the FBI and told them the truth about everything that happened that day,” Parlatore said. ”The FBI cleared him.”

Parlatore said he also provided documents earlier this week to the Jan. 6 committee in response to a Feb. 15 subpoena to Mastriano. Parlatore made the offer of an interview months ago, he said. The committee has yet to schedule an interview with Mastriano, and he has nothing to hide, Parlatore said

The submission of documents from Mastriano comes as lawmakers are looking to gather as much testimony and evidence as they can before beginning a series of public hearings next week. The committee has interviewed more than 1,000 witnesses and collected tens of thousands of pages of documents as it looks to give the American public the most comprehensive look at the events that led to the worst attack on the Capitol in two centuries.

A Senate Judiciary report released late last year alleged that Mastriano and his wife “took part in the January 6 insurrection,” citing footage of them passing through breached barricades and police lines at the Capitol. Mastriano has told reporters that he left when things turned violent.

Mastriano previously denied breaking any laws that day, and he has not been charged with any crime in connection to the Capitol attack.

There is no evidence that Mastriano entered the Capitol building or that he participated in the violence. He has declined repeated efforts by The Associated Press over the past year to interview him about what he did and saw that day. He has called the violence “unacceptable.”

Mastriano was among Trump’s most dedicated supporters during the 2020 campaign and has been a prominent peddler of unsubstantiated claims that the election was stolen from Trump. He floated a plan in the Republican-controlled state Legislature to undo Biden’s victory in Pennsylvania and empower lawmakers to instead award the state’s electoral votes to Trump.

Mastriano later organized bus trips to the U.S. Capitol on Jan. 6 and advertised himself ahead of time as a scheduled speaker on the Capitol steps during the afternoon. He has described getting prime seats to Trump’s speech before the riot. Trump also endorsed Mastriano for governor.

In its subpoena, the Jan. 6 committee also noted Mastriano’s presence outside the Capitol the day of the insurrection, saying his public statements indicated “you witnessed ‘agitators … getting in the face of the police’ and ‘agitators … start pushing the police up the Capitol steps.’”

Parlatore on Thursday dismissed the committee’s work as “not a real investigation” and politically motivated, designed to boost Democrats’ prospects in November’s midterm elections. The panel is made up of seven Democrats and two Republicans.

Congressional investigators are hoping to learn more about Mastriano’s role in a plan to arrange for an “alternate” slate of electors from Pennsylvania for Trump after the 2020 election. Those individuals went on to declare themselves the rightful electors and submitted false Electoral College certificates declaring Trump the winner of the presidential election in the state.

Those certificates from the “alternate electors” were then sent to Congress, where several of Trump’s Republican allies in the House and the Senate used them to justify delaying or blocking the certification of the election during the Jan. 6 joint session of Congress. The committee will dedicate a portion of its public hearings to the fake electors scheme and the individuals who helped it come to life.