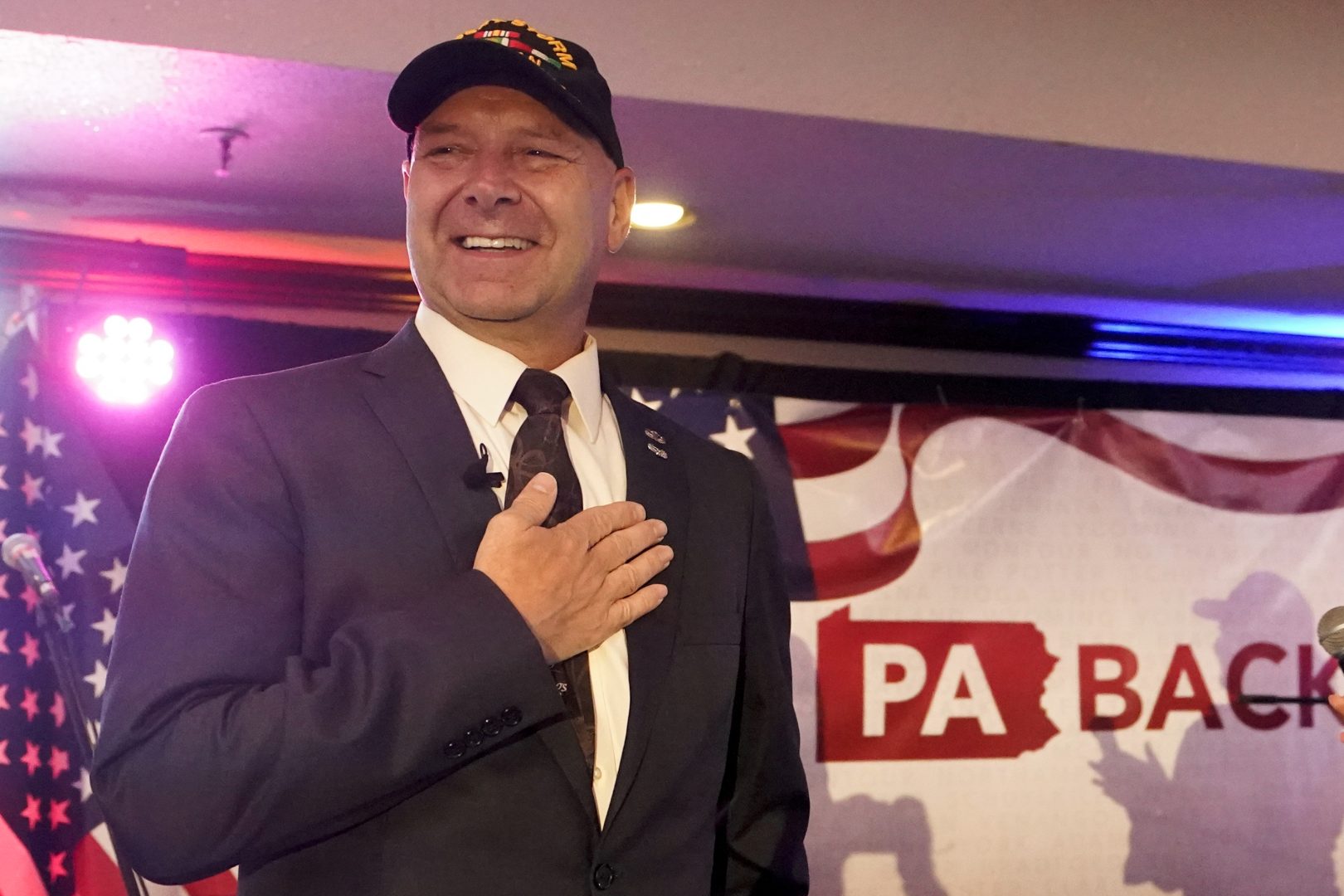 A state senator and retired U.S. Army colonel, Mastriano says he wants to make everyone re-register if they want to vote again. The concept flatly violates federal law, legal scholars say, and may conflict with state law, not to mention constitutional protections. It is also a throwback to laws designed by white people in past eras to keep Black people or newer European immigrants from voting.

But Mastriano, who was present at the U.S. Capitol during the Jan. 6 insurrection, is undeterred, discussing his plan for re-registration both before and after winning the Republican nomination for governor on May 17.

Pennsylvania is one of the few states where governors appoint a secretary of state who oversees elections. That means a Mastriano victory in November could make Pennsylvania — a premier presidential battleground state — a test case of whether laws meant to protect voter access to the polls can be undermined. 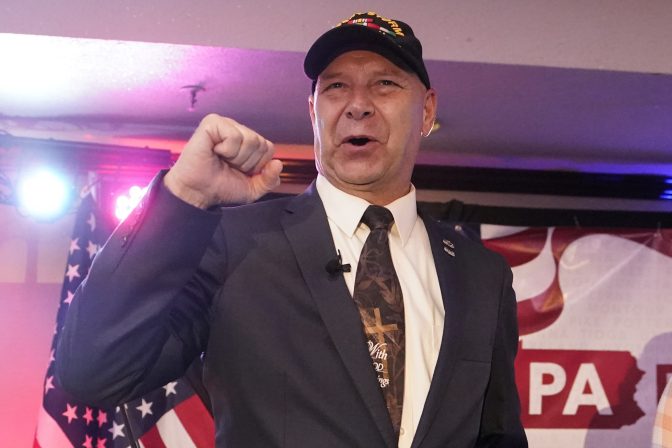 State Sen. Doug Mastriano, R-Franklin, the Republican candidate for Governor of Pennsylvania, gestures to the cheering crowd during his primary night election party in Chambersburg, Pa., Tuesday, May 17, 2022.

WHAT HAS MASTRIANO SAID?

It’s unclear where Mastriano got the idea, and he has not responded to repeated interview requests on this or any other topic. But he has pitched re-registration as a necessary step to scrub the voter rolls of dead voters and ghost voters — voters registered to nonexistent addresses — in time for the 2024 presidential election.

In a gubernatorial primary debate in April, Mastriano said that, if elected, he would require voters to “re-register. We’re going to start all over again.”

In an interview on the conservative broadcaster Newsmax three days after the primary election, Mastriano suggested that it is a step that his appointed secretary of state can take without approval by the Legislature.

“We might have to reset, as far as registration, start that whole process over here,” Mastriano said. “There’s still a lot of dead on the rolls, and what have you, and there’s ghost phantom voters that we found, as well, at various address.”

If he is elected, he said, taking that and other steps is of the utmost urgency: “So we’re going to take that very seriously and move really hard. Basically we have about a year to get that right before the 2024 presidential election.”

Scholars who specialize in election law said they had never heard of a state doing anything similar recently — probably because there are laws designed to prevent it.

It is certainly barred by the National Voter Registration Act, at least for federal elections, and likely runs into significant protections under the federal — and possibly the state — constitution and laws, constitutional law scholars say.

“No, a state couldn’t just unilaterally require everyone to re-register for federal elections,” said Edward Foley, a law professor at The Ohio State University who directs the school’s election law program.

Federal law aside, Pennsylvania law says no registered voter can be required to register again while they live at the same address.

The National Voter Registration Act allows states to remove voters from rolls at a person’s request and requires states to make a “reasonable” effort to keep voter registration lists free of people who died or moved away.

But it also restricts the power of states to unilaterally purge voter rolls.

Under Pennsylvania law, that means someone who has not voted for five years cannot simply be removed without an effort to contact them — by mail — followed by a grace period of two more federal elections.

HOW WOULD IT WORK?

“It’s just a bad idea all the way around,” Cortes said.

In any case, it probably solves nothing: Forcing everyone to re-register would not stop voters from dying or moving away, Cortes said.

“The minute you re-register everyone, you run into these things again,” Cortes said.

Southern states, following Reconstruction, imposed annual re-registration requirements, with some of those laws lasting until at least 1971. The laws were regarded as one of the mechanisms used by those states to try to keep Black people from voting.

“So it definitely does not have a favorable history,” said Michael Morley, a Florida State University law professor who specializes in constitutional and election law.

Northern states did, too, imposing it in the early 20th century on big cities such as Philadelphia and New York City, where there were higher populations of newer immigrants from Europe, researchers say.

Perhaps its most modern comparison is to a law in Texas, enacted in 1966 soon after the 24th Amendment outlawed poll taxes. The Texas law limited voting to people who re-registered annually, setting aside a four-month time frame within which to register.

A three-judge federal court panel struck that down in 1971, calling it a “direct descendant of the poll tax.”

WHAT EFFECT COULD IT HAVE?

U.S. District Judge John V. Singleton wrote in the 1971 opinion that it is “beyond doubt” that the requirement disenfranchised “multitudes of Texas citizens otherwise qualified to vote” and cited research by a University of Texas professor who found that registration and turnout were much lower in states with annual registration laws.

Separate research cited by Singleton — by a Washington University professor — found that such laws also had a strong class bias and effectively suppressed the vote of working- and middle-class residents, in addition to minorities.

Political scientists said they knew of no modern day research on such a law.

But Christopher Borick, a political science professor at Muhlenberg College in Allentown, Pennsylvania, said purging the voter rolls and requiring voters to re-register would “mirror” the inequities inherent in the current system.

“Over time, the people most likely to get registered are often the most educated, most wealthy, older individuals,” Borick said. “They will most likely be the first to re-register if required. People that will be least likely are the ones who are harder to get to register and maybe … over time took an incredible effort and even years to bring them into the system.”

Voters sometimes die between the time they mail in a ballot and when it is counted. Pennsylvania counties are supposed to be notified of deaths twice a month by the state so that they can remove those names from voters rolls.

Meanwhile, a handful of people were caught voting in the name of a dead relative in Pennsylvania’s 2020 presidential election — nowhere near the numbers necessary to have an impact on any election outcome.

If there are ghost voters on Pennsylvania’s rolls, it’s unclear who or where they are.

Someone who registers to vote must swear that they are a U.S. citizen and are asked to provide either a driver’s license number or a Social Security number. Someone who cannot provide either one must still show a form of identification that meets Pennsylvania law the first time they vote.

Dush has yet to issue a report or cite any evidence of ghost voters.