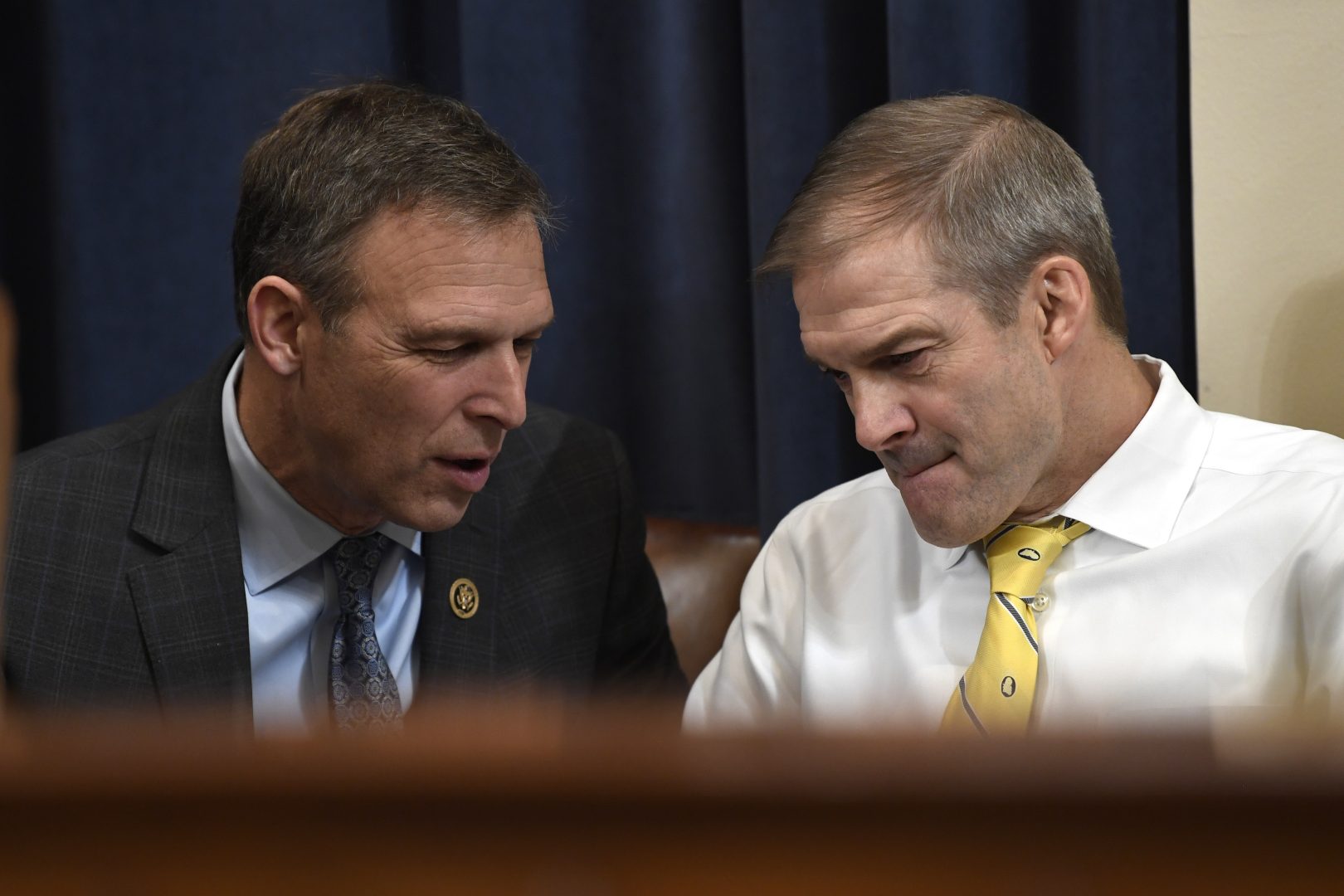 (Washington, D.C.) — A House panel issued subpoenas Thursday to House Republican Leader Kevin McCarthy and four other GOP lawmakers in its probe into the violent Jan. 6 insurrection, an extraordinary step that has little precedent and is certain to further inflame partisan tensions over the 2021 attack.

The panel is investigating McCarthy’s conversations with then-President Donald Trump the day of the attack and meetings the four other lawmakers had with the White House beforehand as Trump and his aides worked to overturn his 2020 election defeat. The former president’s supporters violently pushed past police that day, broke through windows and doors of the Capitol and interrupted the certification of President Joe Biden’s victory.

The decision to issue subpoenas to McCarthy, R-Calif., and Reps. Jim Jordan of Ohio, Scott Perry of Pennsylvania, Andy Biggs of Arizona and Mo Brooks of Alabama is a dramatic show of force by the panel, which has already interviewed nearly 1,000 witnesses and collected more than 100,000 documents as it investigates the worst attack on the Capitol in two centuries.

The move is not without risk, as Republicans are favored to capture back the House majority in this fall’s midterm elections and have promised retribution for Democrats if they take control.

After the announcement, McCarthy, who aspires to be House speaker, told reporters “I have not seen a subpoena” and said his view on the Jan. 6 committee has not changed since the nine-lawmaker panel asked for his voluntary cooperation earlier this year.

“They’re not conducting a legitimate investigation,” McCarthy said. “Seems as though they just want to go after their political opponents.”

Similarly, Perry told reporters the investigation is a “charade” and said the subpoena is “all about headlines.”

Neither man said whether he would comply. 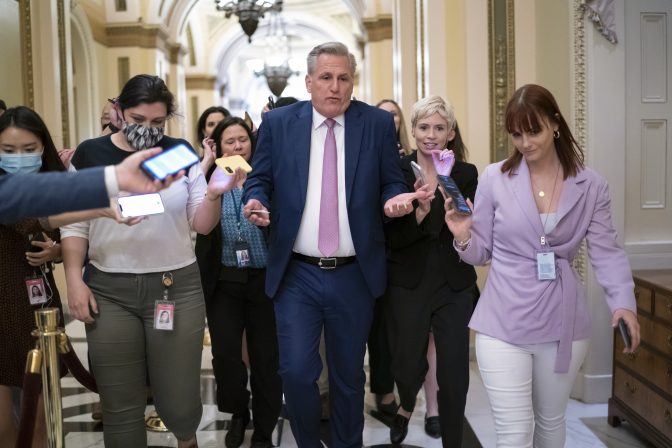 House Minority Leader Kevin McCarthy, R-Calif., heads to his office surrounded by reporters after House investigators issued a subpoena to McCarthy and four other GOP lawmakers as part of their probe into the violent Jan. 6 insurrection, at the Capitol in Washington, Thursday, May 12, 2022.

The panel, made up of seven Democrats and two Republicans, had previously asked for voluntary cooperation from the five lawmakers, along with a handful of other GOP members, but all of them refused to speak with the panel, which debated for months whether to issue the subpoenas.

“Before we hold our hearings next month, we wished to provide members the opportunity to discuss these matters with the committee voluntarily,” said Mississippi Rep. Bennie Thompson, the Democratic chairman of the panel. “Regrettably, the individuals receiving subpoenas today have refused and we’re forced to take this step to help ensure the committee uncovers facts concerning January 6th.”

Rep. Liz Cheney, the panel’s Republican vice chair, said the step wasn’t taken lightly. The unwillingness of the lawmakers to provide relevant information about the attack, she said, is “a very serious and grave situation.”

Congressional subpoenas for sitting members of Congress, especially for a party leader, have little precedent in recent decades, and it is unclear what the consequences would be if any or all of the five men decline to comply. The House has voted to hold two other noncompliant witnesses, former Trump aides Steve Bannon and Mark Meadows, in contempt, referring their cases to the Justice Department.

In announcing the subpoenas, the Jan. 6 panel said there is historical precedent for the move and noted that the House Ethics Committee has “issued a number of subpoenas to Members of Congress for testimony or documents,” though such actions are generally done secretly.

“We recognize this is fairly unprecedented,” said Illinois Rep. Adam Kinzinger, the other GOP member of the panel, after the committee announced the subpoenas. “But the Jan. 6 attack was very unprecedented.”

Kinzinger said it is “important for us to get every piece of information we possibly can.”

McCarthy has acknowledged he spoke with Trump on Jan. 6 as Trump’s supporters were beating police outside the Capitol and forcing their way into the building. But he has not shared many details. The committee requested information about his conversations with Trump “before, during and after” the riot. 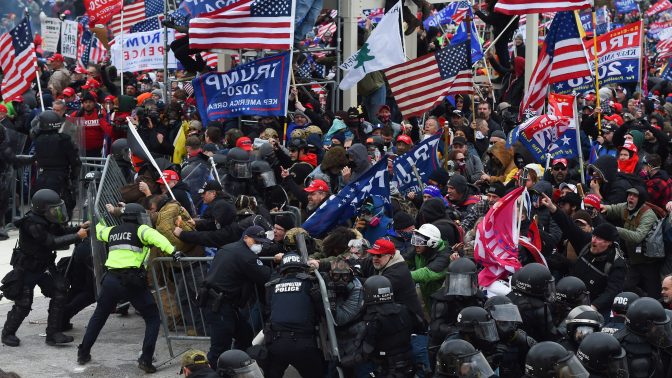 Trump supporters clash with police and security forces as they push barricades to storm the US Capitol in Washington D.C on January 6, 2021. (Photo by ROBERTO SCHMIDT/AFP via Getty Images)

McCarthy took to the House floor after the rioters were cleared and said in a forceful speech that Trump “bears responsibility” for the attack and that it was the “saddest day I have ever had” in Congress — even as he went on to join 138 other House Republicans in voting to reject the election results.

Another member of the GOP caucus, Washington Rep. Jaime Herrera Beutler, said after the attack that McCarthy had recounted that he told Trump to publicly “call off the riot” and said the violent mob was made up of Trump supporters, not far-left antifa members, as Trump had claimed.

“That’s when, according to McCarthy, the president said, ’Well, Kevin, I guess these people are more upset about the election than you are,” Herrera Beutler said in a statement last year.

The GOP leader soon made up with Trump, though, visiting him in Florida and rallying House Republicans to vote against investigations of the attack.

The other four men were in touch with the White House for several weeks ahead of the insurrection, talking to Trump and his legal advisers about ways to stop the congressional electoral count on Jan. 6 to certify Joe Biden’s victory.

“These members include those who participated in meetings at the White House, those who had direct conversations with President Trump leading up to and during the attack on the Capitol, and those who were involved in the planning and coordination of certain activities on and before January 6th,” the committee said in a release.

Brooks, who has since been critical of Trump, spoke alongside the former president at the massive rally in front of the White House the morning of Jan. 6, telling supporters to “start taking down names and kicking ass” before hundreds of them broke into the Capitol.

Perry spoke to the White House about replacing acting Attorney General Jeffrey Rosen with an official who was more sympathetic to Trump’s false claims of voter fraud, and Biggs was involved in plans to bring protesters to Washington and pressuring state officials to overturn the legitimate election results, according to the panel. Jordan, the top Republican on the House Judiciary Committee, spoke to Trump on Jan. 6 and was also involved in strategizing how to overturn the election.

Several of their efforts were detailed in texts released to the panel by Meadows, who was Trump’s chief of staff at the time.