Lou Barletta speaks at a news conference where he accepted the endorsement of a rival in Pennsylvania's crowded Republican primary for governor, Jake Corman, right, May 12, 2022, in Harrisburg, Pa. Corman's endorsement comes as GOP leaders warn that leading Republican primary candidate Doug Mastriano is too far right to win in a general election.

The two are uniting in a last-ditch attempt to winnow support for state Sen. Doug Mastriano, who leads the race so far. 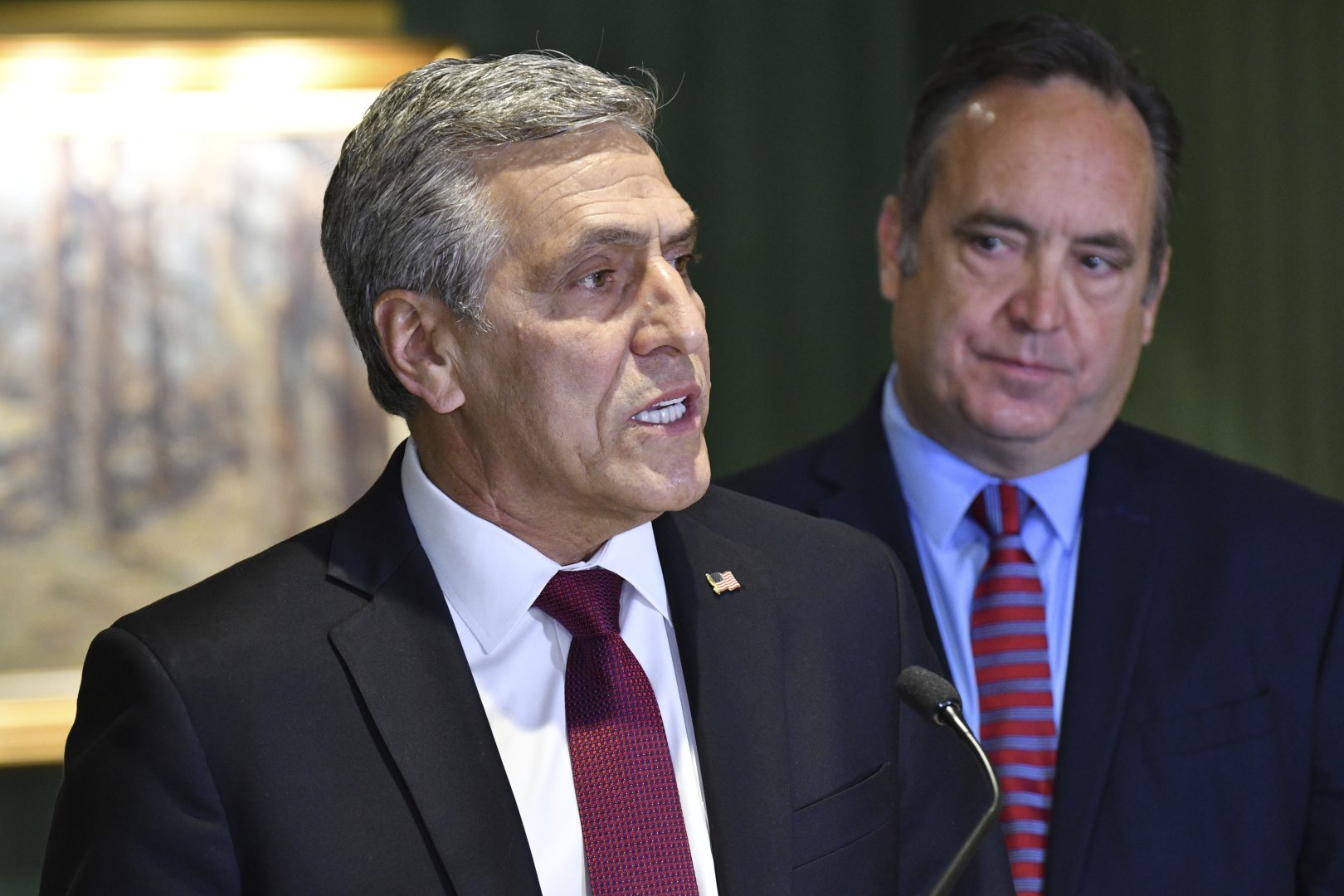 Lou Barletta speaks at a news conference where he accepted the endorsement of a rival in Pennsylvania's crowded Republican primary for governor, Jake Corman, right, May 12, 2022, in Harrisburg, Pa. Corman's endorsement comes as GOP leaders warn that leading Republican primary candidate Doug Mastriano is too far right to win in a general election.

Following a campaign that struggled to gain favor with Republican primary voters, state Senate President Jake Corman on Thursday ended his bid for the his party’s nomination for governor.

He is now backing former Republican Congressman Lou Barletta, just days Tuesday’s primary. Voters have been able cast mail ballots for weeks, but the last day to apply for one was May 10th.

“I’m not advising other people in their candidacy,” Corman said at an event near the state Capitol in Harrisburg. “But what is important is the party itself and our ability to be able to put a candidate forward that can win in the fall.”

Corman filed court papers weeks ago indicating he would drop out of the crowded GOP primary, but changed his mind after a conversation with former President Donald Trump. The veteran senator said he had not been contacted by Trump this time around, nor had he consulted with him before dropping out.

“I think he’s very fond of Lou, but the [former] President has decided not to endorse in this race and I respect that,” Corman added.

Corman pointed to Barletta’s experience in Congress and his penchant for running issues-focused ads and messaging as reasons for offering his endorsement of the former mayor of Hazelton. The Senate President will remain on the ballot, but said he’s encouraging his supporters – even his own family – to back Barletta.

Corman’s and Barletta’s allyship comes less than a week before voters go to the polls. More than 880,000 voters – including nearly 200,000 Republicans – have already requested mail-in ballots that were finalized weeks ago, and tens of thousands of those voters have already made their choice.

Both repeatedly denied suggestions the decision was influenced by a desire to limit state Sen. Doug Mastriano’s (R-Franklin) lead in the polls, but hinted they were not confident in Mastriano’s ability to successfully campaign against the sole Democratic candidate, Josh Shapiro.

Multiple surveys in the last two weeks have shown Republicans prefer Mastriano to every other candidate – including Barletta – by at least 10 points.

“I know Doug Mastriano is trying to win this as well, but I’m presenting to the people of Pennsylvania that I will give Republicans the best chance to win in November,” Barletta said.

Some Republican leaders privately say Mastriano’s far-right positions, links to conspiracy groups – and Shapiro’s eagerness to face him in the fall – make him the wrong choice. Republican Senate Majority Leader Kim Ward, for instance, has backed businessman Dave White’s campaign, writing on Facebook that she believes Democrats “will destroy him [Mastriano] with swing voters” in November.

The Franklin County state senator has advocated for a total ban on abortion, vowing to push state lawmakers to approve a bill banning the procedure after six weeks of pregnancy if elected. Like other Republicans, Mastriano has also suggested that Act 77 – Pennsylvania’s law authorizing no-excuse mail-in voting – should be repealed over the false claim that Democratic Governor Tom Wolf’s administration manipulated the law to allow widespread voter fraud to occur in 2020.

Multiple state-mandated audits, federal investigations, and court rulings not only concluded that results in that contest were accurate, but that no such fraud or malfeasance happened.

Mastriano also marched with protestors past police barricades at the U.S. Capitol on Jan. 6 last year and attended a political conference last month hosted by two activists that adhere to the QAnon conspiracy theory.

The Republican senator has said he did not enter the Capitol building with rioters and has insisted on the campaign trail that he was merely expressing his right to free speech in participating in some of the events of Jan. 6.

He declined to explain either decision further in an interview with the Delaware Valley Journal last week, but instead shrugged off the optics and suggested reporters there scrutinize Shapiro and U.S. Senate candidate John Fetterman for any connections to extremist groups.

Sens. Corman (R-Centre) and Mastriano (R-Franklin) are among the several dozen state lawmakers who signed a letter asking Congress to delay certifying Pennsylvania’s 2020 election result, despite no evidence that would call that result into question.

Last fall, Corman said he accepts Biden’s victory. But he maintains an ongoing election investigation being led by Senate Republicans is warranted.

Where are the Pa. Senate candidates getting their money?