(Washington) — An interim report from the Senate Judiciary Committee provides the most detailed look yet at former President Trump’s attempts to enlist the Justice Department in his efforts to overturn the results of the 2020 election.

The report from the panel’s Democratic majority documents the chaotic final weeks of Trump’s presidency following his loss to Joe Biden, and how Trump tried to force Justice Department officials to help him keep his grip on power.

Department leaders ultimately resisted Trump’s pressure, but it took threats of mass resignations across the department to get him to back down.

The efforts of two Pennsylvania Republican lawmakers to overturn the election are also noted in the report — Congressman Scott Perry and state Senator Doug Mastriano: 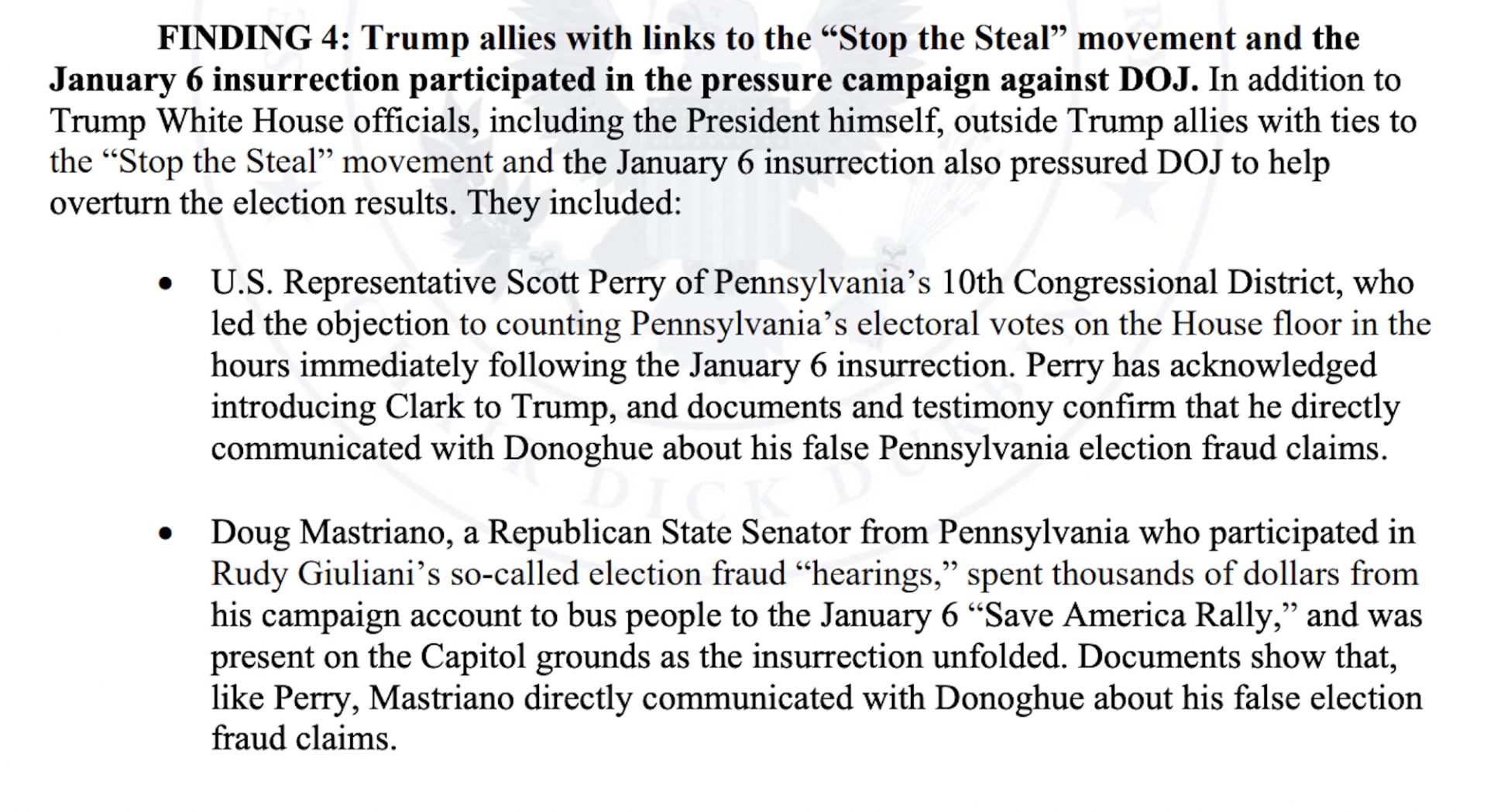 A key moment that emerges in the report is a Jan. 3 meeting in the Oval Office between Trump and senior Justice Department leaders, including then-acting Attorney General Jeffrey Rosen and his top deputy, Richard Donoghue.

Rosen told the committee that Trump opened the three-hour meeting by saying: “One thing we know is you, Rosen, aren’t going to do anything to overturn the election.” 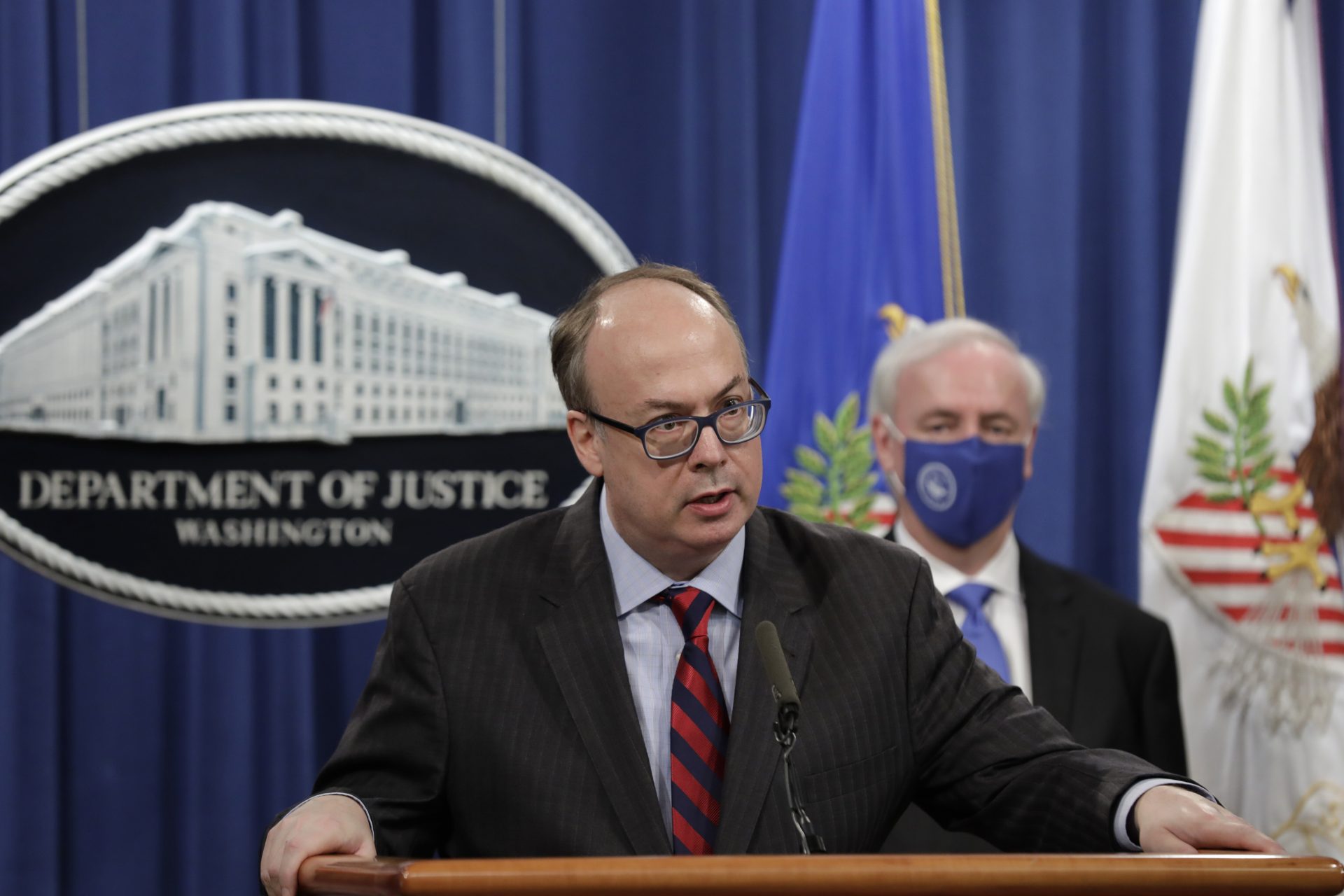 Rosen and his deputies refused to endorse Trump’s claims, and pushed back against the president’s proposed scheme to dump Rosen for Clark.

The report says Donoghue and others made clear that all of the department’s assistant attorneys general would resign if Trump went forward with the scheme, and that mass resignations likely wouldn’t end there.

Rosen and Donoghue, who were both interviewed by the committee, said White House Counsel Pat Cipollone and another top White House lawyer, Patrick Philbin, also pushed back against Trump’s plan, and threatened to quit as well.

The report says Trump continued to entertain the idea of installing Clark at the helm of the Justice Department, and only abandoned the idea at the end of the Oval Office meeting.

The meeting was one of several ways in which Trump sought to pressure the Justice Department to pursue his election fraud claims.

Ultimately, Trump’s efforts failed, though he continues to push lies that the election was stolen.

Pa. Republican lawmakers and the U.S. Capitol attack
As part of WITF’s commitment to standing with facts, and because the Jan. 6 attack on the U.S. Capitol was an attempt to overthrow representative democracy in America, we are marking elected officials’ connections to the insurrection. Read more about this commitment.
Sen. Mastriano is among the several dozen state lawmakers who signed a letter asking Congress to delay certifying Pennsylvania’s 2020 election result.
U.S. Rep. Perry is part of what’s called the “Sedition Caucus” of 138 U.S. House members who voted to overturn the results of the 2020 election despite no evidence to support election-fraud claims.
This supported the election-fraud lie, which led to the attack on the Capitol.

Fed up by pandemic, US food workers launch rare strikes