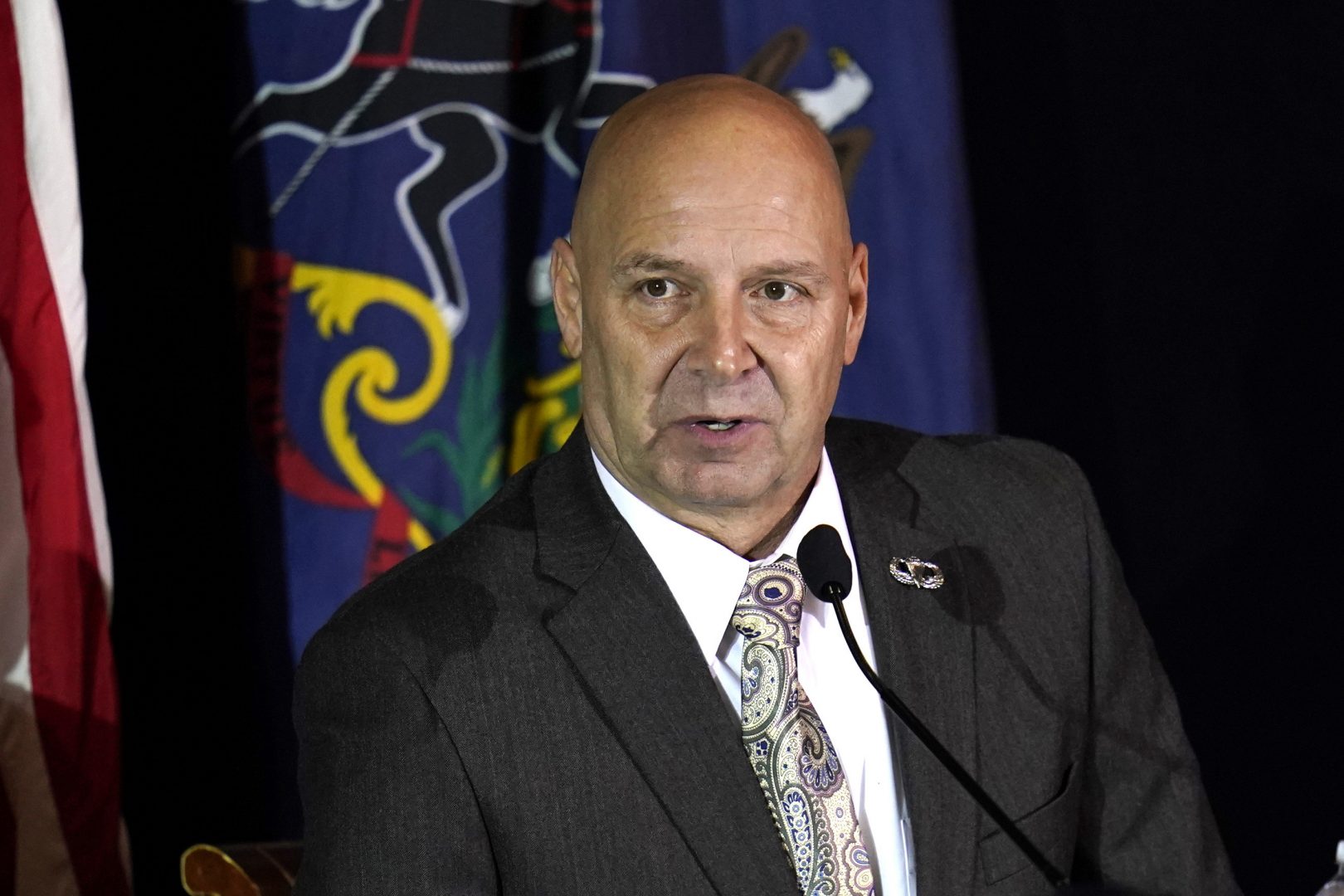 (Harrisburg) — A backer of former President Donald Trump’s effort to carry out an Arizona-style “forensic investigation” of Pennsylvania’s 2020 presidential election suggested Thursday that fellow Republicans in the state Senate are blocking his efforts.

In a video posted Thursday on Facebook, state Sen. Doug Mastriano did not name names, but blamed “the powers that be” for preventing him from holding a meeting of the committee he chairs to vote on issuing subpoenas to counties.

Mastriano also said he has “been stopped for the time being.” Mastriano did not say how he was stopped, later deleted the video and did not respond to requests to clarify his comments.

Mastriano, R-Franklin, has helped spread Trump’s baseless falsehoods that the election was rigged against him and has claimed that Trump “asked me” to run for governor.

Democrat Joe Biden won Pennsylvania by more than 80,000 votes, and courts have repeatedly thrown out Republican claims about election fraud or illegalities.

In any case, critics say an election audit is duplicative, given the required audits already carried out by counties and the state, and that the review envisioned by Mastriano does not resemble any sort of audit that is accepted by the election-administration community.

Under Senate rules, Mastriano needs a majority of his committee to be present to hold a meeting.

Senate Republican leaders have been largely silent about whether they support Mastriano’s efforts. It has sowed discord in the Republican caucus, with one publicly blasting it, saying it is only favored by “a handful of my colleagues.”

A spokeswoman for Senate Majority Leader Kim Ward, R-Westmoreland, said Thursday that Mastriano “has the authority to carry out his duties, including asking the committee to issue subpoenas under the rules of the Senate of Pennsylvania.”

Democrats oppose it, and Gov. Tom Wolf and state Attorney General Josh Shapiro, both Democrats, have suggested that they will challenge any subpoena in court.

Democrats accuse Mastriano of trying to orchestrate a “sham audit,” saying he is seeking to undermine the legitimacy of Biden’s victory in a bid for Trump’s endorsement to run for governor.

The committee’s ranking Democrat, Sen. Anthony Williams of Philadelphia, said Mastriano does not have enough votes from Republican senators to issue subpoenas, even though Republicans won’t come out and say it because they fear Trump.

“No one is rushing on their side to declare Donald Trump irrelevant, but there are a bunch of them that don’t necessarily agree with what Donald Trump says or does and until it’s clear that he’s weaker, I don’t think you’ll see a rush to jump in front of that train,” Williams said. “They don’t support this, and therefore they’re trying to manage it.”

At an “Audit the Vote PA” rally on Monday, Mastriano appeared to suggest that he knows he doesn’t have the votes on his committee to issue subpoenas.

“It’s a long fight and so please let your state senator know in Pennsylvania what you want to happen. Do you want a forensic investigation?” he asked the crowd.

The Senate committee that typically handles election issues, the State Government Committee, is holding a hearing next week on the state’s auditing practices.

Leaders of the Audit the Vote PA group have complained about Argall and the Senate’s ranking member, President Pro Tempore Jake Corman, R-Centre.

In an interview on WWDB-AM in Philadelphia in June, one of them, Toni Shuppe, said Argall told them “there wasn’t enough evidence” of election fraud, and that they had heard Corman was “the road block.”

On July 7, Mastriano sent letters to Philadelphia and York and Tioga counties with a sweeping request for access to documents, information and equipment, giving them until July 31 to formulate a plan to comply, under threat of a subpoena.

All three effectively refused to cooperate.

Mastriano, meanwhile, has left key questions unanswered about the massive undertaking he envisions, such as who will do the work, how will it be funded and where such a vast amount of documents and equipment would be stored.

Pa. Republican lawmakers and the U.S. Capitol attack
As part of WITF’s commitment to standing with facts, and because the Jan. 6 attack on the U.S. Capitol was an attempt to overthrow representative democracy in America, we are marking elected officials’ connections to the insurrection. Read more about this commitment.
Sen. Mastriano’s support of the election-fraud lie included staging a policy committee meeting in November that gave Trump lawyer Rudy Giuliani a platform for disinformation. Mastriano is also among the several dozen state lawmakers who signed letters asking Congress to delay certifying Pennsylvania’s 2020 election result, despite no evidence that would call that result into question.
This supported the election-fraud lie, which led to the attack on the Capitol.