A person holds a mask while walking outside in Philadelphia, Friday, May 21, 2021.

In liberal Philly, a year of anxiety over health and politics makes it hard to ditch the mask

For some Philly residents, the promise of a return to pre-pandemic life is tantalizing, with every step toward that goal coming as good news. But for others, loosening restrictions have become a source of stress and uncertainty — a reminder of the damage the pandemic and the politics surrounding it have done to trust, both in experts and in other people. 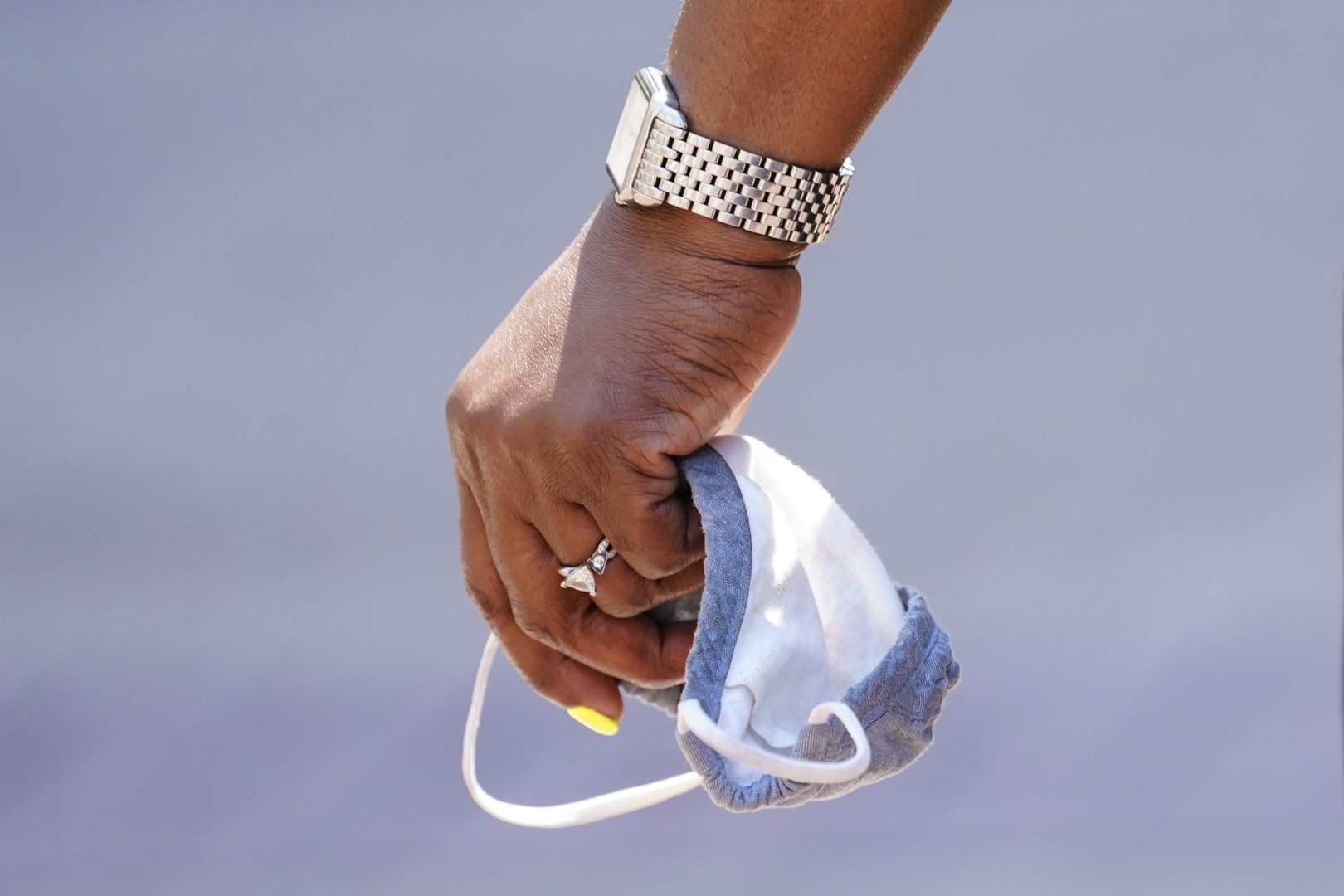 A person holds a mask while walking outside in Philadelphia, Friday, May 21, 2021.

(Philadelphia) — There are a lot of ways Tess Galen could be exposed to coronavirus on an average weekday.

The 30-year-old Strawberry Mansion resident works at the front desk at a library in Old City. It’s not a job she can do remotely, so for the majority of the pandemic, she’s been taking the bus there, then spending hours having face-to-face interactions with strangers.

She’s been less worried about her own health since she got vaccinated. But recently, her encounters with people have started feeling weirdly political.

“It’s almost like if you take your mask off, you’re now picking a side,” Galen said. “I know I’m probably making incorrect assumptions about some of these people, but it’s impossible to not sort of think about it for a second.”

Last month, the Centers for Disease Control and Prevention released guidancesaying vaccinated people generally don’t need to wear masks in any situation and unvaccinated people can ditch the mask in select outdoor forums. After that guidance, Philadelphia stopped requiring outdoor masking and ended capacity restrictions for businesses. As the vaccine rate climbs, city officials pledge to phase out indoor mask mandates for vaccinated people in the coming weeks — as the state of Pennsylvania already has — if case levels keep dropping.

For some Philly residents, the promise of a return to pre-pandemic life is tantalizing, with every step toward that goal coming as good news. But for others, loosening restrictions have become a source of stress and uncertainty — a reminder of the damage the pandemic and the politics surrounding it have done to trust, both in experts and in other people.

You can see this divide in virtually any busy public space in the city.

Take, for instance, the sprayground at Dilworth Plaza on a hot, humid afternoon as people were leaving work on an afternoon last week. The kids jumping through sprinklers weren’t masked, but many of their parents sitting around the perimeter were, or had face coverings pulled below their chins, ready to be yanked back up at a moment’s notice.

The same went for the pedestrians hurrying through the area. Much like the city’s coronavirus rules themselves, people’s comfort with safety habits seem to be in a transitional phase.

Yomaira Mendoza, 33, a stay-at-home mom who lives in Northeast Philly, was sitting under an umbrella next to City Hall as her five-year-old daughter ran through the water and her one-year-old son slept in his stroller. Mendoza had a mask on, but pulled down.

“I don’t like them at all,” she said, laughing. The masks are a pain in the heat, she explained, and she’s someone who likes to smile at strangers she passes on the sidewalk. She plans to get vaccinated, but isn’t yet, so she’s keeping masks at the ready.

On the other side of the sprayground, Katie, who declined to give her last name, also had her mask off. She was sitting with a group of close friends she felt safe around, cradling her baby daughter and watching her two-year-old son run through the splash zone.

Her feelings about masks, and about changing COVID-19 rules, are complicated.

“That whole not having it mandated anymore thing is really stupid,” she said, referring to the CDC guidance. “I think it’s going to actually cause more people not to be as cautious and think that the pandemic’s over, and then we’re going to have a spike again.”

Katie lives in Mount Airy. She got COVID-19 while she was pregnant with her daughter, an experience she says was horrible and left her with lingering lung problems. She’s not vaccinated against the virus yet because she’s nervous about how quickly the shots were approved, and so she wears masks indoors and on public transportation. She’s a regular bus rider, and hates the idea of other unvaccinated people going without them in stores and other indoor spaces.

Mackenzie Warren, a 28-year-old South Philly resident, says masks have taken on an even bigger significance for her. Even though she’s fully vaccinated and not particularly worried about her own safety, she’s still wearing them pretty much every time she leaves her house, inside and outside.

For one thing, she says she doesn’t want anyone to perceive her as being careless. And like Galen, the library worker, she views it as a symbol of her own left-leaning politics.

“Because of the [political] discourse that’s been going on and the crazy polarization about it, masks, I think, are a visual representation of your personal politics and your personal morals,” she said.

“There was a period of time during the pandemic where if you saw someone with their mask around their chin, or not wearing it, you knew where they stood,” she said.

For the past year, Medley has devoted a lot of her attention to homeschooling her two kids. They are five and six, still too young to be vaccinated, and while she acknowledges that they’re unlikely to get seriously ill from COVID-19, she doesn’t want to take unnecessary risks.

Over the past year, she has relied heavily on her friends and neighbors being diligent about masks in order to feel safe. In general, it has worked. Most of the people she interacts with are like her: liberal and cautious about COVID, habitual mask-wearers.

Now she feels that era of the pandemic coming to an end, and she’s seeing evidence of the changes every day. She has been frustrated, she said, because she feels like CDC, state and city guidance gloss over the fact that people have young unvaccinated kids, and don’t want to put their health in the hands of unmasked strangers in the grocery store.

But with more and more people walking around with faces uncovered in her East Passyunk neighborhood, she’s gradually learning to recalibrate her expectations.

“I think maybe it’s a good thing because it was getting very easy to get tribal and reactionary and feel as though there were sides when you’re dealing with germs,” she said. “But it’s disquieting, because I think a lot of people gained a lot of mistrust in every direction through this pandemic.”

‘Whole year of this big trauma’

Holley Wilkin has been watching mask dynamics unfold with fascination.

She’s an associate professor at Georgia State University, and studies how public health officials communicate with the public. Like Medley, she’s been thinking a lot about trust — she points out that there have now been a few times when the CDC has quickly changed direction on masks, and it has seemed to damage confidence in their guidance.

First, officials instructed people not to wear them early in the pandemic, largely because of concerns that shortages might leave none for medical professionals. Then, she says when the CDC announced in May that not wearing masks indoors was OK for vaccinated people, it likely caused some whiplash again.

Mask-wearing in the US has always been scattershot and enforced inconsistently. But people like Medley and Warren, who live in a city with a relatively high compliance rate and had viewed masks as a tool for assessing safety, weren’t quite ready to give it up. She says some people who got used to wearing masks still see it as a reasonable, low-impact way of stopping transmission, or at least telegraphing that they take the pandemic safety seriously and want to be thoughtful.

There’s also lingering fear that the new guidance provides cover to unvaccinated people who have been cavalier about mitigation efforts since the start of the pandemic.

“We know that there will be people that were refusing to wear the masks even prior to this,” Wilkin said, “So how do we know that everybody we’re going to encounter … has been vaccinated and that’s why they’re now not wearing the masks?”

“I think it is a natural reaction that people have because … we’ve gone through this whole year of this big trauma,” she added.

Wilkin also finds it telling that some people who trusted the CDC throughout the pandemic aren’t willing to accept its latest guidance. She thinks it has a lot to do with the centers’ messaging earlier in the vaccine rollout, when health officials said people should still wear masks while studies were being conducted about whether vaccinated people could spread the virus.

“I think because they were so cautious for so long, that’s probably weighing into people going, ‘Wait, all of a sudden I’m allowed to, and it’s OK now?’” she said.

At Dilworth Plaza, these questions were not weighing on Phillippa Taylor-Jenkins and Prince Jenkins. The couple, who live in New Jersey, were visiting the city, lounging in the sun near the fountains.

Prince, who is 48 and a Trenton firefighter, is vaccinated. He got his shots after seeing a lot of the guys he works with get exposed to COVID-19. Phillippa, 44, works for the state as an employee assistance counselor and has had her first shot.

Both say they were careful throughout the pandemic, and still aren’t fully on board with going mask-free inside with people they don’t know. But here, sitting in the sun in Center City, they feel safe without them.

“The numbers are going down so far,” Prince said, adding that he’s happy to trust whatever businesses and states advise.

Phillippa is looking forward to her teenage kids getting vaccinated, especially her 19-year-old son who — she says with an eye-roll — is still “living his life like normal.”

For now, she’s keeping her stash of masks. At this point, she says, they feel like “a necessary evil.”