AstraZeneca Covid-19 vaccine stand in a fridge at the locale vaccine center in Ebersberg near Munich, Germany, Monday, March 22, 2021.

To Tarik Khan, a wasted vaccine is a sin. 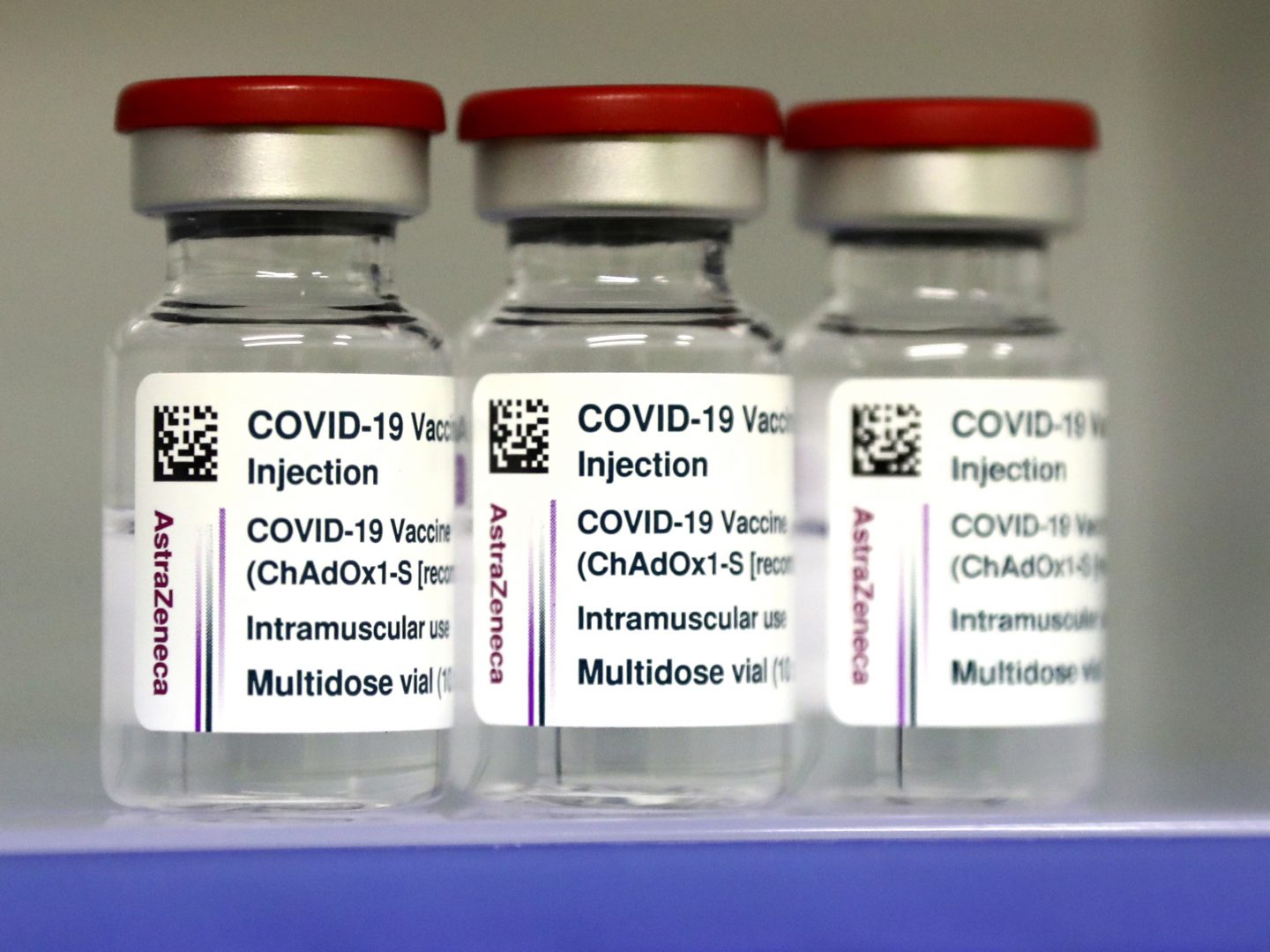 AstraZeneca Covid-19 vaccine stand in a fridge at the locale vaccine center in Ebersberg near Munich, Germany, Monday, March 22, 2021.

(Philadelphia) — Tarik Khan rushed to his car, carrying 10 syringes full of the coronavirus vaccine. He had only six hours to get them into the arms of some of Philadelphia’s most vulnerable residents.

The family nurse practitioner climbed behind the wheel and turned the ignition. The gas light flashed on — already, a delay getting shots to people who are homebound and depending on him.

Vaccine vials are opened every day, but sometimes, people don’t show up for appointments. That vaccine must still be administered within hours or it expires, creating Khan’s unusual lottery.

Half of the 10 doses he had on a recent spring night were considered leftovers, shots that could mean the difference between health and hospitalization. But if the doses expired, Khan would have to throw them away. To him, a wasted vaccine is a sin.

His first possible recipient was Patricia Dorsey, an 80-year-old woman who is visually impaired and lives alone in Wynnefield Heights.

After wrapping up his eight-hour shift at the Family Practice and Counseling Network Abbottsford-Falls office, Khan called her. “Ms. Dorsey? Hi, I have the extra vaccine for you,” he said. “Can I come over now?”

He pulled away from the Nicetown curb in search of a gas station. Khan had until 10 p.m. to vaccinate every person, their names and addresses handwritten on a piece of scrap paper.

He tucked his phone between his right hand and the steering wheel. 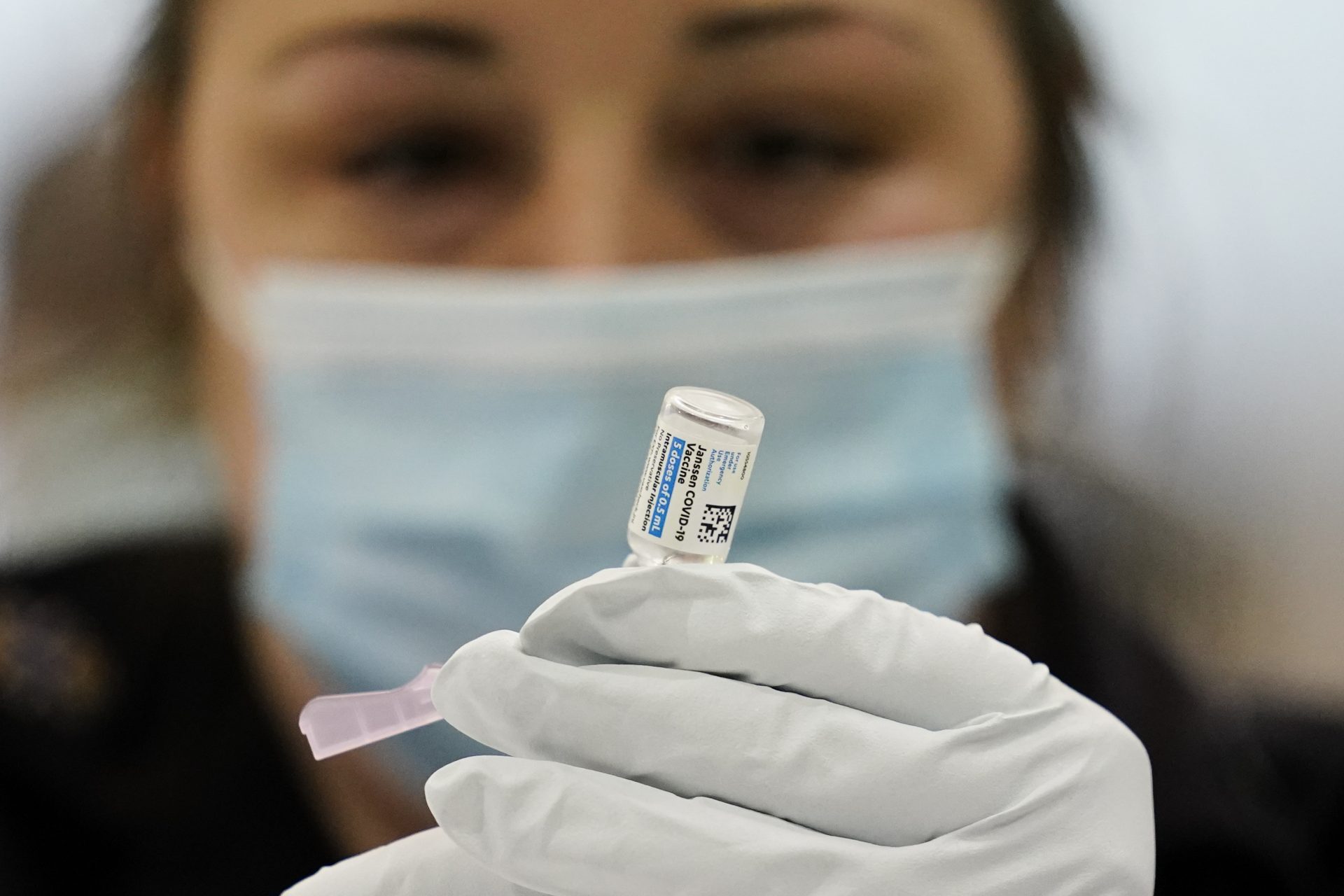 A member of the Philadelphia Fire Department prepares a dose of the Johnson & Johnson COVID-19 vaccine at a vaccination site setup at a Salvation Army location in Philadelphia, Friday, March 26, 2021.

FIVE HOURS AND 16 MINUTES TO GO

In Philadelphia, the Department of Public Health recommends that providers give leftover doses to eligible people who happen to still be at a clinic as it closes, or to anyone nearby. Some providers have a standby list or put out calls on social media. But there’s no established system for pairing leftovers with residents who are homebound.

Many of these people were among the first to become eligible for the vaccine but are now left behind as the city moves forward, following President Joe Biden’s order to allow all adults to qualify for vaccination as soon as Monday.

Efforts for mobile coronavirus vaccine clinics have increased in recent weeks to reach the city’s estimated 7,400 homebound residents. But Khan is frustrated that so many seniors are still waiting. Still, he acknowledges his mini-home-delivery system is not sustainable.

Khan, 42, spends his days seeing patients at his office, administering vaccines at a community clinic, or working on his Ph.D. dissertation at the University of Pennsylvania. His mother was an emergency room nurse at Einstein Medical Center and he grew up in Bustleton. Every day, he wears pins that say “Black Lives Matter” and “Love is Love” and a necklace with three symbols — a cross, the Arabic phrase for “God is Great,” and the Hebrew symbol of ‘Life.’

He knows this recent spring night’s 10 doses were nothing compared to the more than half a million who have been partially or fully vaccinated in the city. But he sees that for those he visits, the result feels life-altering.

He calls the leftovers “angel doses.” Khan cobbled together his list of people needing a vaccine with help from Anna Perng, founder of the COVID-19 Health Equity Coalition, a network of advocates and civic and religious leaders. In the past two months, he’s home-delivered leftover shots to more than 100 people.

He spends hours most nights rushing around the city, delivering leftovers to people in need of a first dose or bringing scheduled second shots to those he has visited before. For others, a wrong turn or a traffic jam might lead to a late dinner or a missed meeting. For Khan, it could render his vaccine worthless.

After vaccinating Dorsey, Khan plugged the next address into Waze and reached behind his seat to grab an apple from a plastic bag on the floor. He chomped on it while navigating three-and-a-half miles through West Philadelphia.

He arrived at his second home with four hours and two minutes left.

Khan grabbed a plastic shower caddie from the backseat. It was full of gauze, Band-Aids, gloves, and hand sanitizer. And now, vaccine.

Emma Brooks, 77, wanted the vaccine for months, but with arthritis in both knees, it’s hard for her to get around.

Khan bent down by her left side. “Just relax your arm,” he instructed. “Let it hang, hang like a jellyfish.” 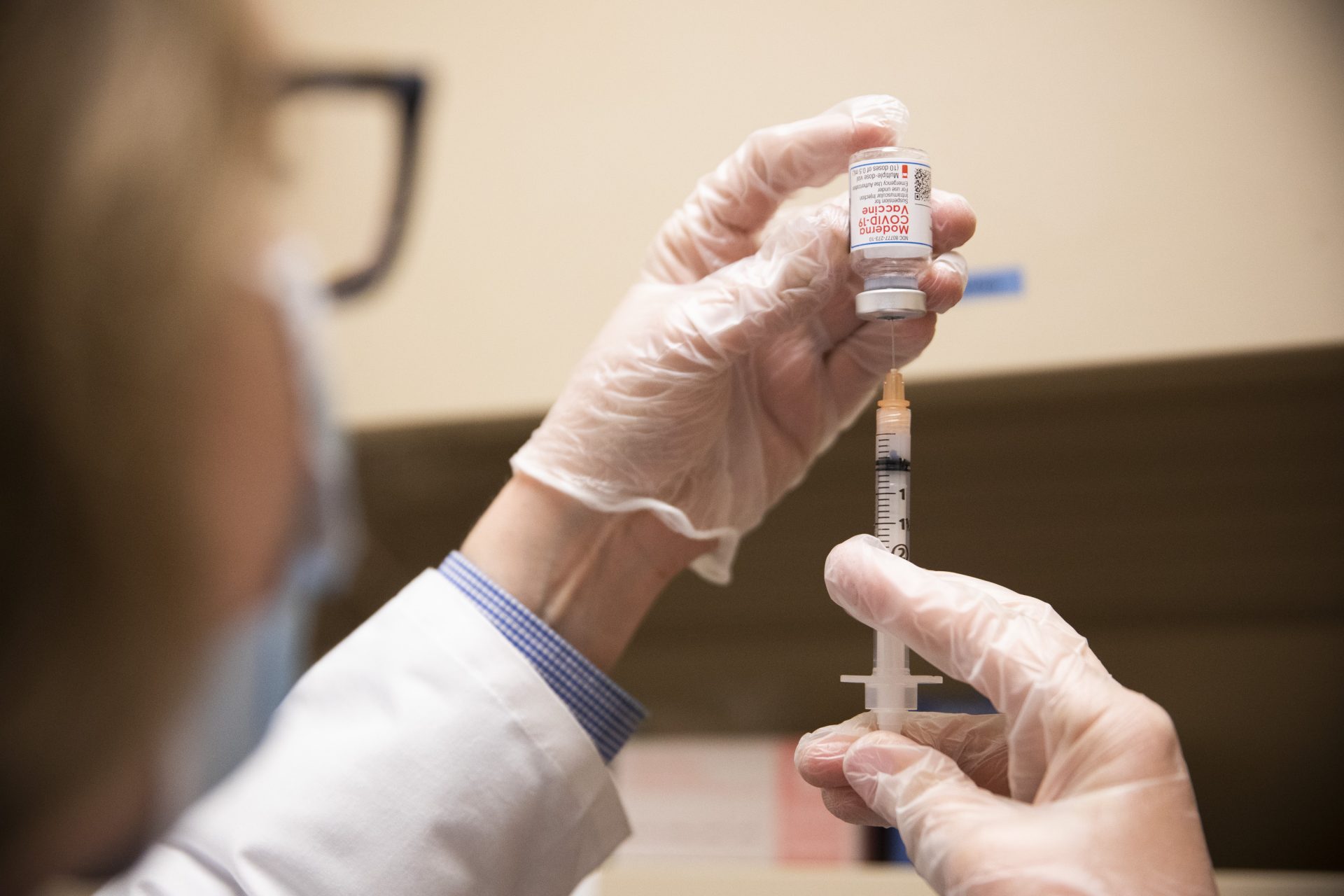 A pharmacist fills a syringe with vaccine at the Weis Market Pharmacy on Valley Road in Enola on Apr 6.

He injected a dose of the Moderna vaccine.

“I didn’t feel nothing,” she said behind a leopard print mask.

“A+,” he replied, glancing at his watch to note the start time for the 15-minute waiting period to monitor for rare allergic reactions.

“Do you mind if I ask you, is Louis Carney on your list?” Brooks said from her recliner. “That’s my brother. He’s disabled.”

Khan, sitting on the edge of an air conditioner still in its box, scrolled through the master list of people in need of a vaccine on his Notes app. Yes, he told Brooks, her brother was on there. But he didn’t expect to get to him tonight.

A vaccine TV spot started playing. “A lot of people are leery about getting it because they don’t know if it’s safe or not,” Brooks said. “The people don’t understand that it isn’t something they just threw together.”

“I tell my patients, too, ‘It’s OK to be skeptical,’ ” Khan said. “But the important thing is that there’s science, there’s good science, behind it.”

Khan checked his watch. “I could talk to you forever,” he said, “but I gotta go to my next house for these shots.”

Once outside, Khan called the next person on his list, but the woman backed out. Instead, Khan reached out to Carney, Brooks’ brother. He would be getting the vaccine tonight after all.

It was a straight shot down Woodland Avenue, 2.6 miles to Khan’s next stop, in Southwest Philadelphia.

It was getting dark — two hours and 35 minutes left until his 10 p.m. deadline. After this family, he still had six shots left.

Within minutes, Khan vaccinated Khanh Pham, an 89-year-old who had trouble rescheduling a canceled Rite-Aid appointment for his second dose.

When he called Carol McKenna to let her know he was on his way, no one answered. He hoped the 75-year-old was still up.

Khan circled South Philly’s narrow one-way streets impatiently. He spotted an opening — under a “No Stopping” sign — pulled in, and ran.

He was relieved to see the light was still on.

McKenna lay in a bed by the front door, unable to walk. A cross hung on the wall behind her. Khan and McKenna’s daughter, Diane, propped her up.

“I was starting to get scared that I wouldn’t get one,” Carol McKenna said, “but then you called …”

Diane picked up where her mother trailed off: “You called and kind of saved the day.”

Khan’s day wasn’t over yet. He still had five doses to deliver — second shots for two households he vaccinated with leftover doses last month — and just one hour and 28 minutes to do it.

Fifteen miles away, inside a West Mount Airy home, he vaccinated three people, including a 101-year-old woman. Then, he ran back to his car. It was time for his last stop, a 38-minute trek to far Northeast Philadelphia.

“Come on in!” Kathleen Fossett said after Khan knocked. He had seven minutes to vaccinate Fossett’s brother, Francis McGuire, 55, who has intellectual disabilities, and her husband, Frank, 65, who only has one lung.

Frank was first. Then, McGuire came down the stairs and sat in front of the TV showing the Phillies trailing the Mets 2-0. He looked away as Khan jabbed the needle into his arm. It was 9:58 p.m.

All 10 doses had been safely administered. 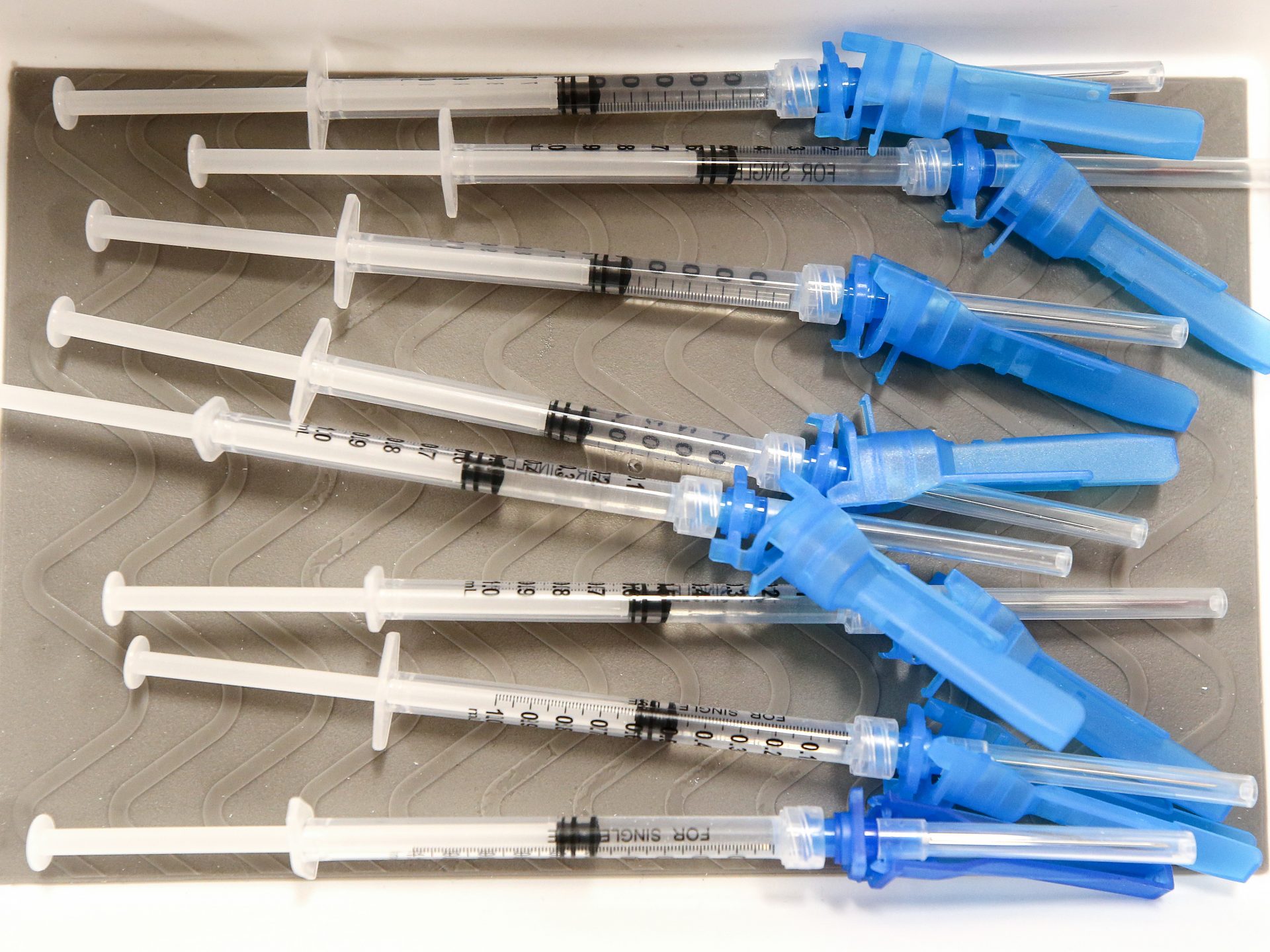 LOS ANGELES, CALIFORNIA – MARCH 11: Syringes containing a dose of the new one-shot Johnson & Johnson COVID-19 vaccine are viewed at a vaccination event at Baldwin Hills Crenshaw Plaza in South Los Angeles on March 11, 2021 in Los Angeles, California. The event was hosted by California health officials and FEMA. The Johnson & Johnson vaccine is now the third coronavirus vaccine to receive emergency approval for use in the United States. (Photo by Mario Tama/Getty Images)

The Phillies scored two runs. They would score three more while Khan waited to make sure everyone felt OK.

“You walk in and all this happens!” Frank said.

Once through the door, he slipped off his shoes, walked to his kitchen sink, and splashed cold water onto his face. Exhausted, he crawled onto the floor with his cat, Theodore.

Tomorrow, he would do it all again.