Health care workers stand outside a COVID-19 vaccination site at the former Bon-Ton department store at Park City Center in Lancaster on March 10, 2021.

Half of all Pennsylvania Republicans polled say they don’t plan to get immunized. 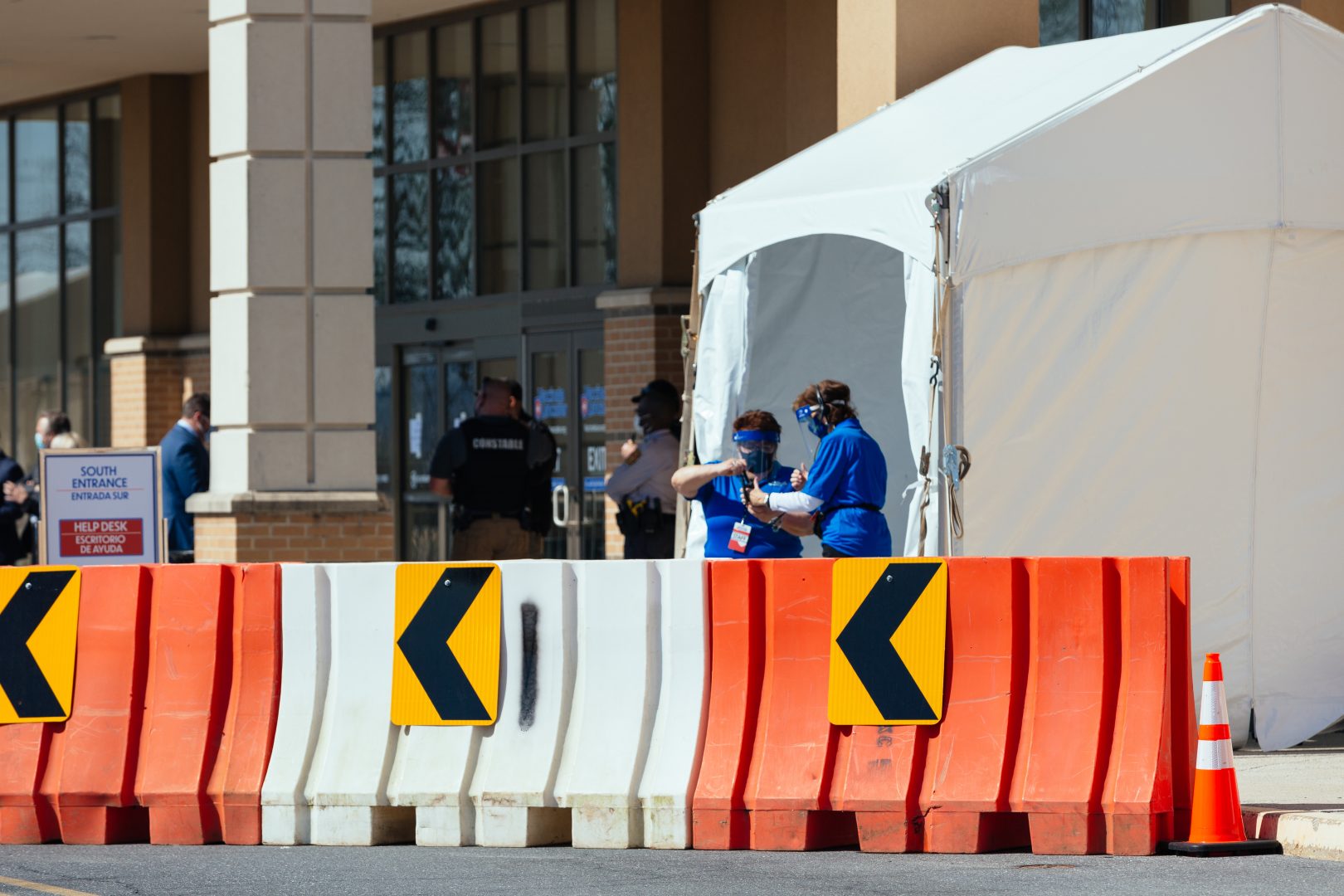 Health care workers stand outside a COVID-19 vaccination site at the former Bon-Ton department store at Park City Center in Lancaster on March 10, 2021.

(Harrisburg) — As a member of Pennsylvania’s bipartisan COVID-19 vaccine task force, Republican state Sen. Ryan Aument of Lancaster has worked hard to make sure people have access to the vaccine.

Now, with a slowdown in people scheduling appointments to get their shots, Aument’s biggest challenge is to persuade some fellow Republicans that the immunization is safe and effective.

He said he strives to lead by example. He recently got vaccinated at the site in Lancaster that he helped to set up along with area health systems and others. He’s spoken publicly about his and his wife Kate’s decisions to get vaccinated.

For Aument, the logic is clear. Vaccines save lives.

They also are the only way for the community to return to normal: businesses that are fully open, no more mask mandates, and an economy that is unencumbered by the constant threat of a virus.

As a Republican, he also understands some of the psychology at work. Some of it is tied to misinformation online, he said.

Pa. Republican lawmakers and the U.S. Capitol attack
As part of WITF’s commitment to standing with facts, and because the Jan. 6 attack on the U.S. Capitol was an attempt to overthrow representative democracy in America, we are marking elected officials’ connections to the insurrection. Read more about this commitment.
State Sen. Ryan Aument (R—Lancaster) was one of 17 Republican state senators who signed a Jan. 4 letter that asked Congress to delay electoral college certification because, it said incorrectly, SCOTUS “is to hear Trump v. Boockvar in the coming days.” On Jan. 11 SCOTUS refused to fast-track the case. The election-fraud lie led to the attack on the Capitol.

Another part of it has to do with some Republicans’ concerns about government overreach. That wasn’t helped by what he said was a “unilateral” approach by Pennsylvania’s executive branch earlier in the pandemic—an issue that he says has improved since Democratic Gov. Tom Wolf formed the bipartisan committee.

Republican former President Donald Trump could also be doing a better job to promote the early successes of his administration’s vaccine development, Operation Warp Speed, Aument said. That would serve as a tacit endorsement of the vaccine itself among his supporters.

“We need to identify, what’s the right message to reach those folks?”
— State Sen. Ryan Aument

And, some of his constituents tell him they want to see more of a connection between getting the vaccine and doing things such as lifting mask mandates and business capacity restrictions. He’s working on efforts to show people those connections.

Still, the broader reasons for vaccine hesitancy are complicated and diverse, Aument said.

He sees three categories. There are people who oppose vaccination on religious or ideological grounds. Those people, he said, may be very difficult to convince. 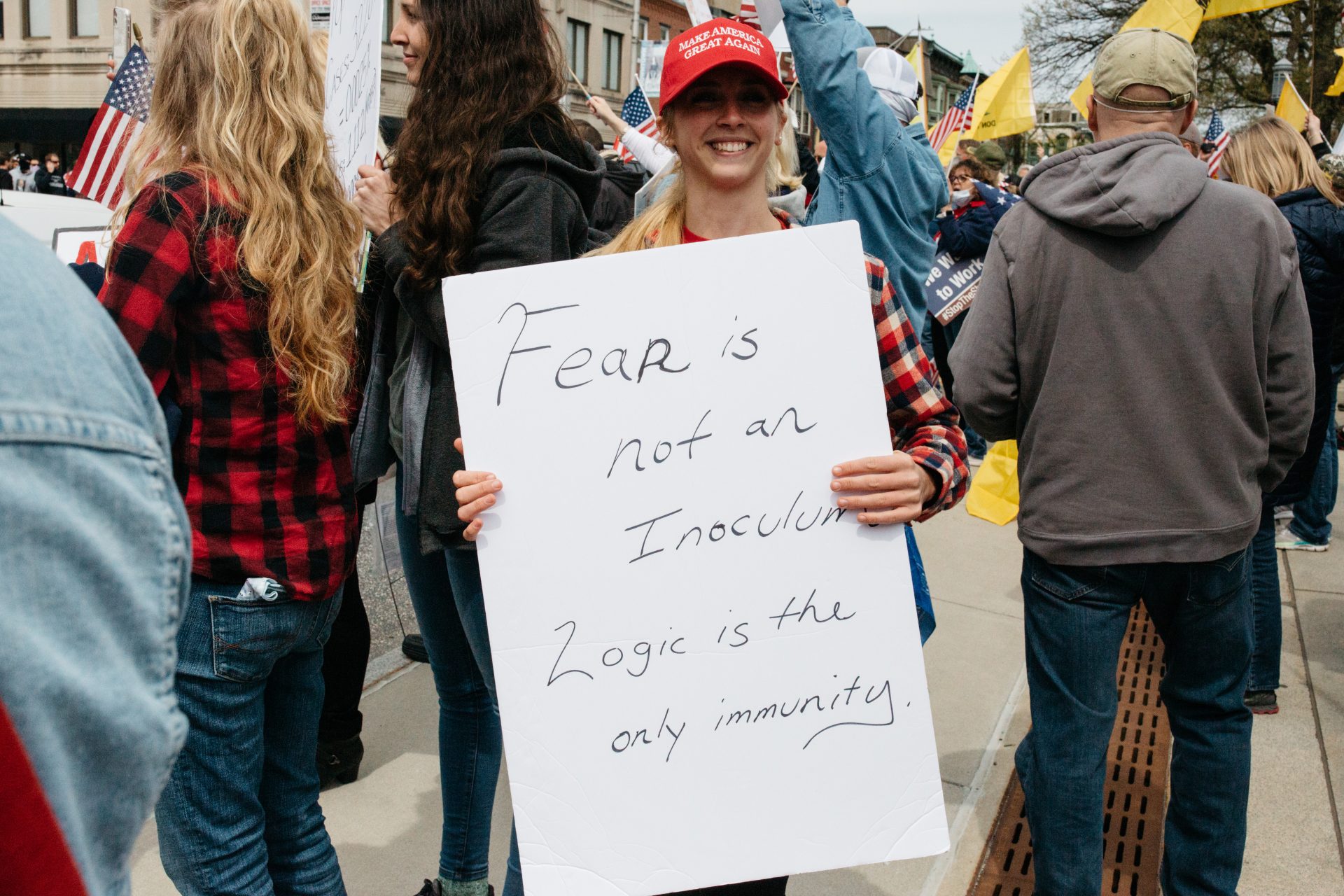 One of the many protesters holding hand-made signs outside the capitol in Harrisburg on Monday, April 20, 2020.

Some others are in more of a “wait and see mode,” Aument said. Those people are looking in their own communities to see what others are doing. Additionally, some people may be willing to get vaccinated, but want it to be more convenient.

“We need to identify, what’s the right message to reach those folks, and identify specifically who is the right person to deliver that message?” Aument said.

A growing body of data show vaccine hesitancy is especially pronounced among people who identify as Republicans. In Pennsylvania, half of all Republicans polled said they don’t plan to ever get immunized, an April Muhlenberg College public health survey found.

That compares with 14% of Democrats and 33% of independents. Overall, nearly a third of not-yet-vaccinated Pennsylvanians polled said they do not plan to get the vaccine.

“With that amount of disease in the area, the 31% of the population that is saying they will not get the vaccine is choosing to get COVID instead of getting the vaccine.”
— Dr. John Douglas Goldman, infectious disease specialist at UPMC Harrisburg

Across the country, counties that have the lowest vaccination rates are those that voted to re-elect Trump in 2020, according to a recent New York Times report.

Potter County was noted in that report for having low turnout for drive-through vaccine clinics. However, the data for Pennsylvania, which changes every day, paint a more nuanced picture, with Trump-favoring counties among the least-and-most vaccinated:

Though interest varies by county, Aument said vaccine providers around the state are reporting a slowdown in people scheduling new appointments.

This was confirmed by state Department of Health Spokeswoman Maggi Barton—who noted that despite this dip in interest, providers are still administering 100,000 vaccines each day.

The success of the COVID-19 Vaccine Task Force, of which I’m a member, is a real-life example of how bipartisan, collaborative efforts improve outcomes. Bringing more voices (including dissenting voices) to the table has contributed to a more successful vaccine strategic plan. pic.twitter.com/Kf05shz3Zk

The health system had spent weeks focusing on non-English speaking communities, doing things like connecting with community leaders to help deliver the message.

More recently, WellSpan has used its mobile clinics to target rural areas such as Delta in southern York County, where several hundred people showed up to get vaccinated.

“Our work now is really transitioning to parts of our region that aren’t close to our vaccination sites,” Andreozzi said. 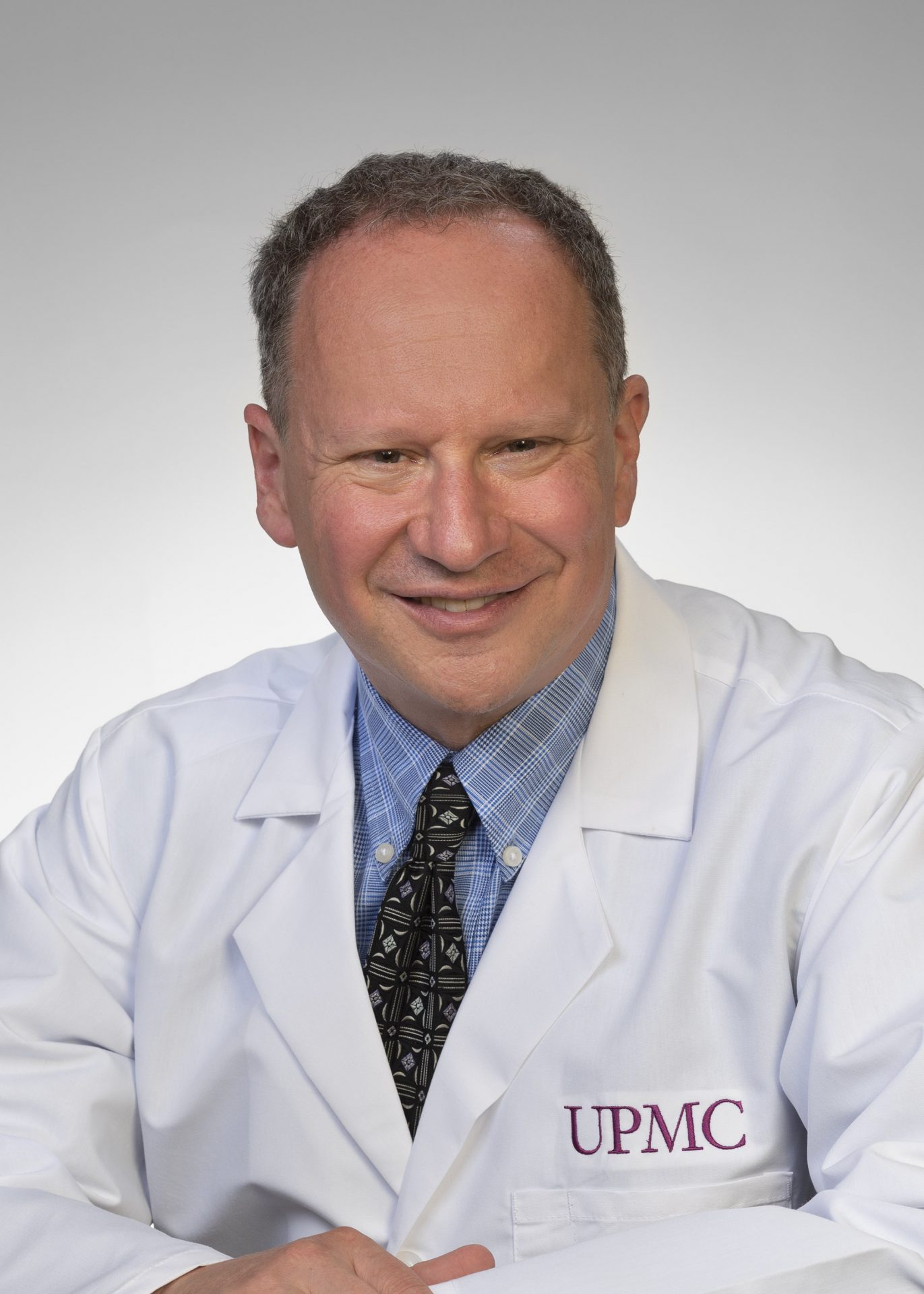 The University of Pittsburgh Medical Center has also seen some slowdown, according to Dr. John Douglas Goldman at UPMC Harrisburg.

Goldman is an infectious disease specialist who spent the past year working to save the lives of people sick with COVID-19. He pointed to state data showing daily case counts that are higher than the first surge of cases one year ago.

“With that amount of disease in the area, the 31% of the population that is saying they will not get the vaccine is choosing to get COVID instead of getting the vaccine.”

He understands some people are hesitant to get a vaccine that was developed quickly, but he said it was done for good reason. Without immunizations, the virus would kill as many as 1.5 million people in the U.S. before herd immunity would be reached. It has already killed more than a half-million, and was the third-highest cause of death last year, just below heart disease and cancer.

Goldman said he urges everyone to get the vaccine. He often reminds his politically conservative patients that Trump and his wife Melania both got vaccinated.

Still, his patience gets stretched when people bring up crackpot theories about the vaccine. For example, when someone told him they heard it causes infertility, he explained that if that were true—and it’s not—then it would mean the virus itself would also cause infertility.

“This is what happens when people read the medical journal, Facebook,” Goldman said. 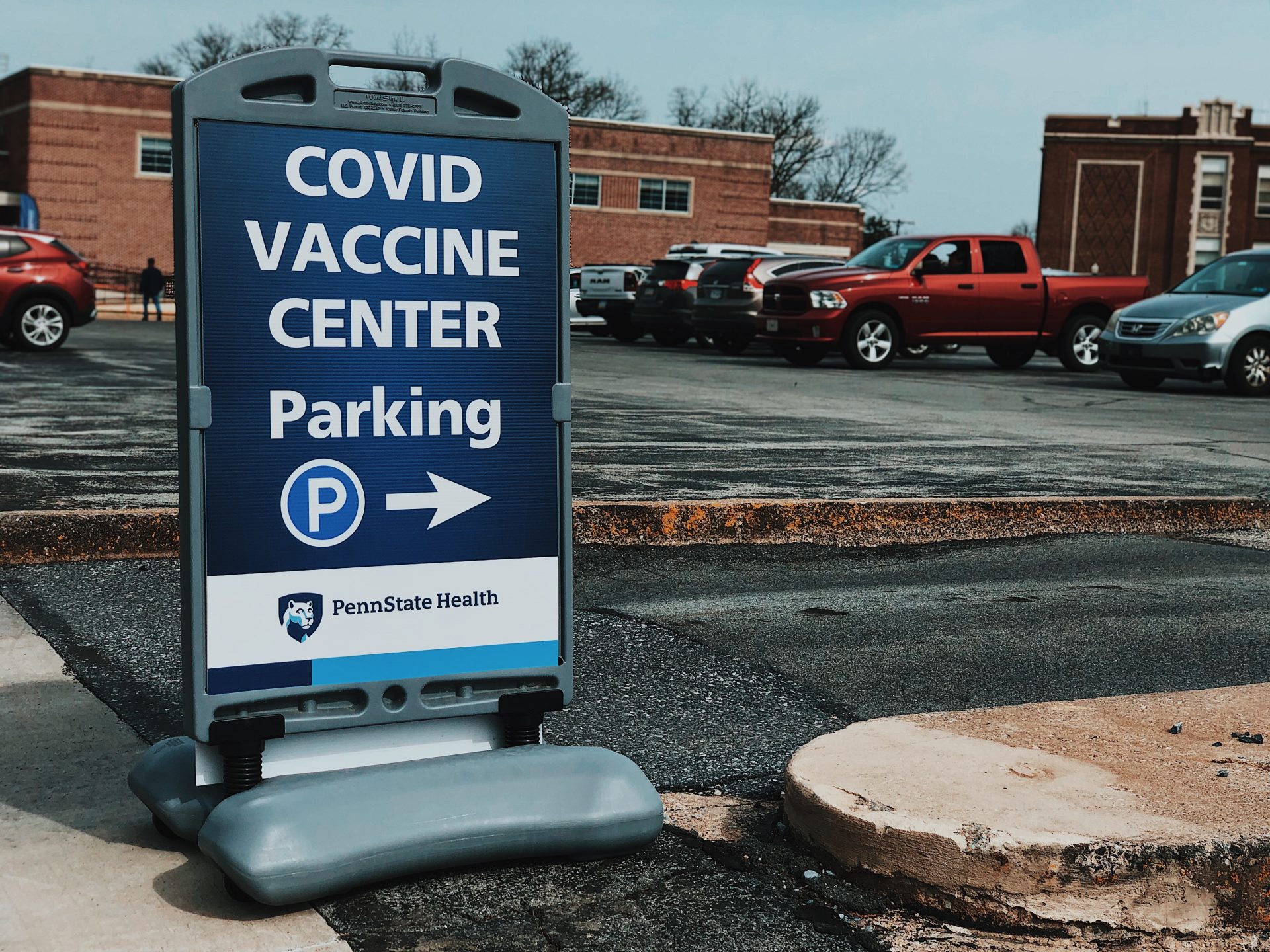 In Lancaster, Aument acknowledges that misinformation is rampant in some rightwing circles — though it is a problem everywhere, and one that preceded the virus.

Much like when dealing with other groups, finding the right people to deliver the message is key, Aument said. For Republicans who value community and distrust big government, that means people such as pastors, small business owners, pediatricians and local pharmacists can play a big role.

Additionally, people who have gotten vaccinated can help to reassure others that the vaccine is worth getting. Those who have survived COVID-19 — or lost loved ones to the virus — can also tell important stories that will help to put things in perspective.

“I think those folks are going to play a really critical role, much more so than an elected official.”

Barton said “trusted messengers will be critical” to winning over vaccine-hesitant people. The state launched a “PA Unites Against COVID” media campaign.

Though those messages address issue specific to their audiences, the core of the message is the simple truth about the vaccine’s role in moving beyond the pandemic.

“The vaccines are the best way forward to protect you, your loved ones and neighbors from the virus and get back to their life and the things they may have missed over this past year,” Barton said. “Statewide we need to reach at least 65 to 80 percent of the population being vaccinated to really move forward.”