Former Green Party presidential candidate Jill Stein speaks outside the federal courthouse in Philadelphia, Wednesday, Oct. 2, 2019. Stein wants Pennsylvania to block Philadelphia from using new touchscreen machines it's buying ahead of 2020's elections and is threatening court action if it doesn't do so promptly. 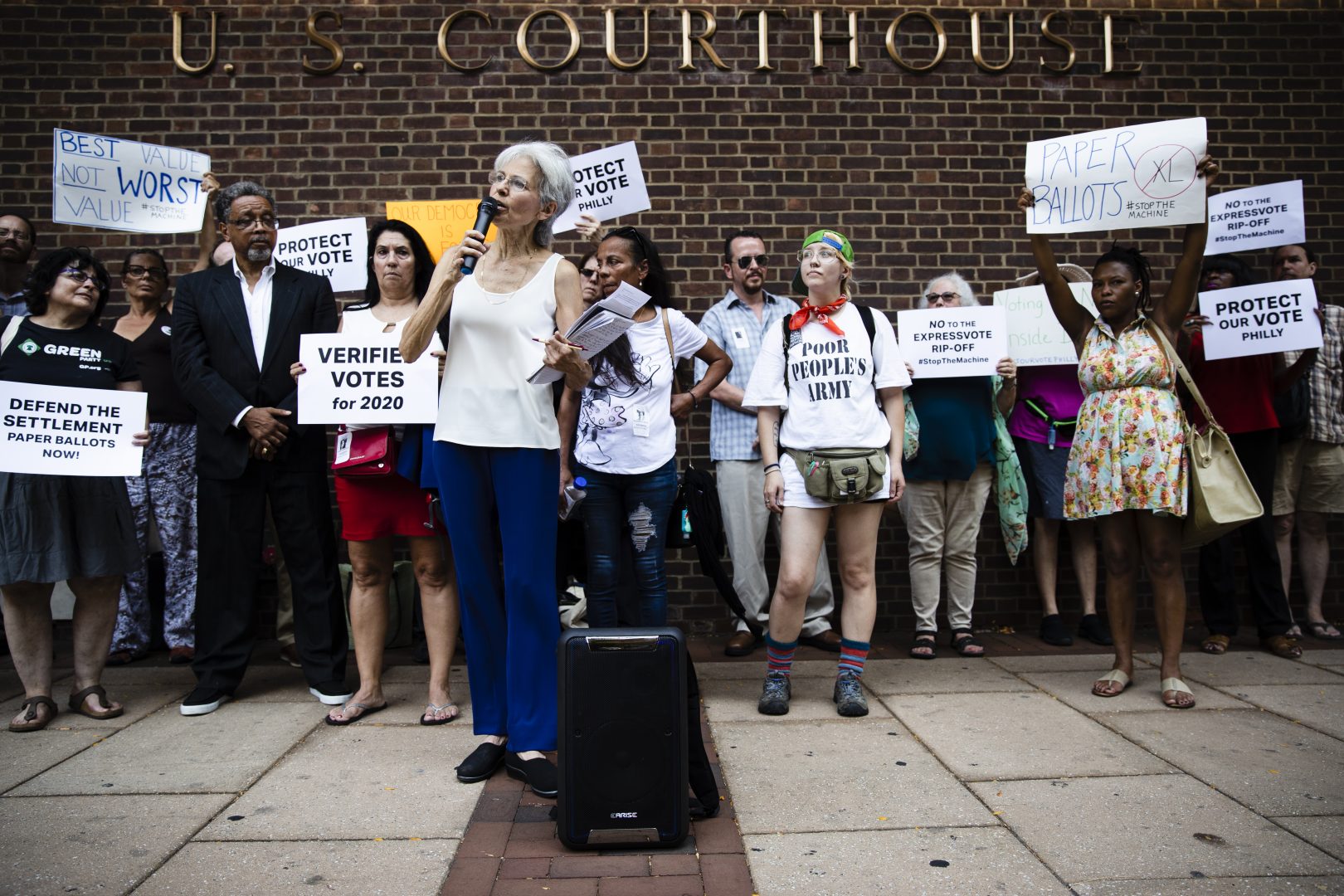 Former Green Party presidential candidate Jill Stein speaks outside the federal courthouse in Philadelphia, Wednesday, Oct. 2, 2019. Stein wants Pennsylvania to block Philadelphia from using new touchscreen machines it's buying ahead of 2020's elections and is threatening court action if it doesn't do so promptly.

A federal judge on Wednesday tossed out a lawsuit by 2016 Green Party presidential candidate Jill Stein that sought to decertify a specific voting machine purchased by Philadelphia and two other counties.

Judge Paul Diamond of the Eastern District of Pennsylvania dismissed Stein’s legal arguments as “baseless and irrational,” and said that decertifying the machines would disenfranchise a million voters in Philadelphia County because, as Secretary of the Commonwealth Kathy Boockvar testified in the case, it would be “very difficult, if not impossible” to replace the voting machines in time for the November general election.

The judge also cited testimony from a Pennsylvania Department of State’s expert witness who said the Stein suit’s allegation that the voting machines could be hacked “are approximately as likely as the fact that androids from outer space are living amongst us and passing as humans.”

Stein’s motion stemmed from a 2018 settlement with the Department of State that mandated the implementation of new voting machines across the state that produce auditable, paper receipts of every vote cast. The Green Party sued following the 2016 election in which Pennsylvania and two other states won by President Trump used machines that produced no physical receipt.

“[D]aft theories, promoted by Dr. Stein, will undoubtedly shake the belief of some in their government because Stein has convinced them that voting integrity is at risk in Pennsylvania,” Diamond wrote in the conclusion to his order. “That is certainly the most unfortunate consequence of Stein’s pointless Motion.”

In a statement issued late Thursday, Stein said her team “is considering possible next steps” in the case.

“The ruling seems to come from a parallel universe where election integrity concerns do not exist and … is a disservice to the people of Pennsylvania,” she said.

Meanwhile, a separate case challenging the XL in state court took a baby step through its pre-trial phase Thursday morning. In that case, the Department of State has asked the court to indefinitely delay discovery largely due to the strain the coronavirus pandemic has placed on the department.

“They’re at the limit of what public servants or anyone can be expected to do. We submit that discovery in a case that is not on a fast track, a civil case that will not affect either of the 2020 elections … should take a back burner to what the State Department is doing right now,” Hangley added.

Hangley also argued that the federal case, though not binding on the state court, should suggest the plaintiffs’ arguments are likely to be similarly without merit.

Attorney Jeanne-Michele Mariani, countering on behalf of the coalition of plaintiffs that includes the National Election Defense Coalition and Citizens for Better Elections, said the widespread implementation of mail-in ballots and consequent decrease in the number of polling places and voting machines in use actually should make it easier for the XL machines to be taken out of use before November. She also contended that the federal case dealt with different issues entirely than the state case, which rests on provisions of the Pennsylvania Election Code. As such, she said, there is no reason that discovery should not proceed.

Commonwealth Court President Judge Mary Hannah Leavitt said she would take the arguments under advisement and issue a ruling “promptly.”