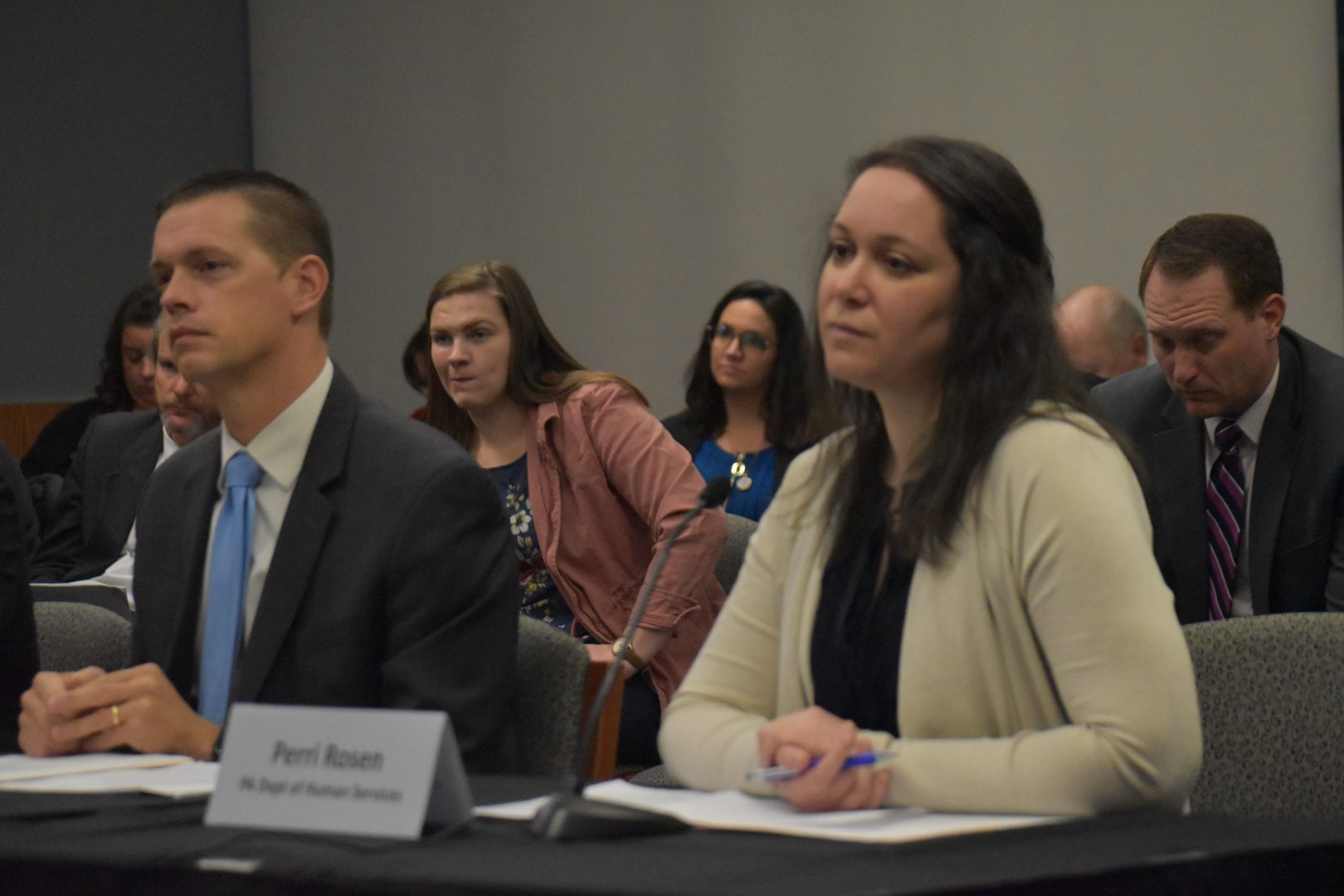 Several members of the Special Council on Gun Violence spent Friday in York hearing from experts about ways to reduce the number of suicides by gun.

Friday’s session was one of five regional hearings scheduled by the group, which was created by an executive order of Democratic Gov. Tom Wolf in August.

Past hearings focused on reducing accidental shootings and combatting mass shootings. Council members are holding the regional sessions as a way to create recommendations, which the council is required to do in the spring 2020.

Here are five things to know about the issue of guns and suicides, based on feedback from experts who attended the York event:

1) Guns are the most common method for suicides

There were more than 2,000 suicides in Pennsylvania in 2017, according to state Department of Health data.

2) Nationally, it’s rare for someone to kill themselves shortly after buying a gun.

Matthew Wintersteen, an associate professor at Thomas Jefferson University who specializes in suicide research, told the panel that national studies have found that most of the time, guns used in suicides were stored in someone’s home.

Buying a firearm that is then used in a suicide death within two weeks of purchase only happens about three percent of the time, Wintersteen said.

But he said that 3 percent figure is based on national data. He said the rate in Pennsylvania might be higher because there is a shorter wait period for someone to buy a gun here.

3) The suicide rate is generally higher in rural counties than urban and suburban ones.

Elk, Wyoming, Wayne, Schuylkill and Carbon counties had the highest suicide rates in the state based on the most recent five-year state data, 2013-2017. Each of those counties had an age-adjusted suicide rate above 21 per 100,000 people during that period.

Meanwhile, Pennsylvania as a whole had an age-adjusted suicide rate of 14 per 100,000 people during that same period.

In an interview after the hearing, Wintersteen pointed to two possible explanations:

The numbers could be skewed, he said, because in counties with fewer people the actions of a relatively small group of people could create a big shift in the suicide rate.

He said another issue is economic opportunity — people in urban and suburban counties typically have more job opportunities. Young people in rural areas have limited job opportunities and don’t always see themselves in a position to relocate for work, Wintersteen said.

Wintersteen, who is a board member of Prevent Suicide PA, said he has worked with many children in rural counties, including Schuylkill County. He said one of the comments often heard from graduating students is that if they’re not going off to college, “they’re wondering what in the world am I going to do?”

“So it creates a problem,” he said. 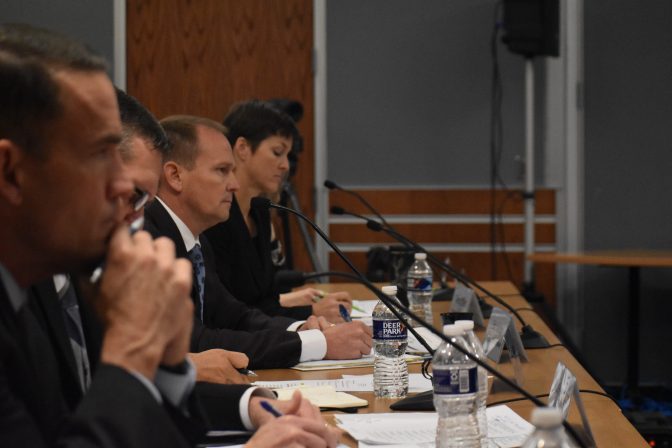 Members of the state’s Special Council on Gun Violence listen during a hearing in York on Nov. 22, 2019. A portion of the full council is attending the regional meetings.

Four: Some are pushing for extreme risk protection orders.

“It’s not for life. It’s not permanent,” Goodman said. “It’s a process that is working in 17 other states.

Bills to pass extreme risk protection orders in Pennsylvania are stuck in committee in both the House and Senate.

State Rep. Eric Nelson, R-Westmoreland, raised concerns about the orders during Friday’s hearing. Temporary extreme risk protection orders, which last until there is a time for a full hearing, allow a judge to remove people’s gun rights before they have a chance to defend themselves in court.

“How does that not become very scary for me as an American?” Nelson asked Goodman. 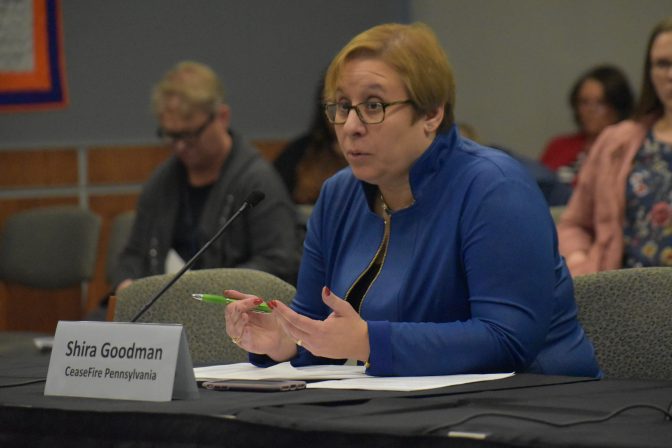 Shira Goodman, executive director of CeaseFirePA, speaks during a gun violence hearing at the City of York School District’s administration building on Nov. 22, 2019.

Five: There are proposed solutions that don’t involve changes to state law

Under the Gun Shop Project, which began in New Hampshire in 2009, gun sellers provide information about the warning signs of suicide.

Wintersteen said Prevent Suicide PA is searching for gun shop and gun range owners who would be willing to partner with the group for a pilot program.

“The biggest hurdle that we’re having is actually engaging gun shop owners and gun range owners into that conversation,” Wintersteen said. “I think part of that is the reality that we don’t necessarily know those folks.” 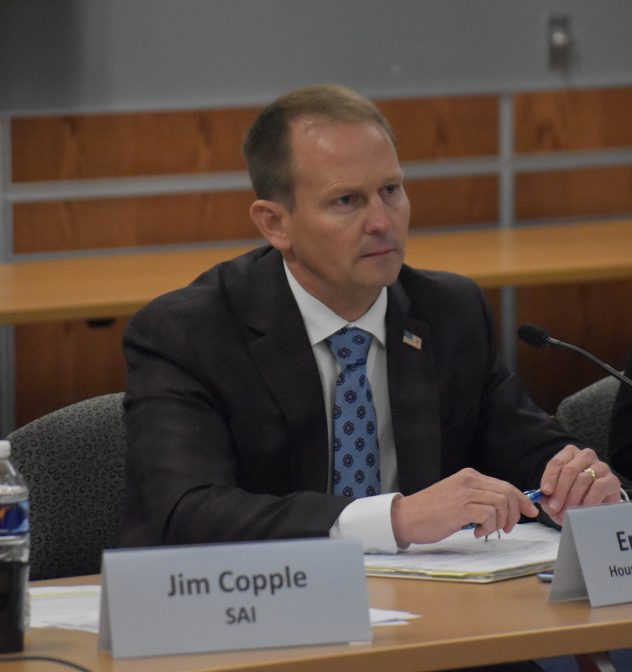 For more highlights from Friday’s meeting, you can check out the live coverage below:

Perri Rosen, co-chair of the Pennsylvania Suicide Prevention Task Force, speaking now. In her testimony, she said Pennsylvania had more than 2,000 suicides in 2017–nearly half involved a gun.

“Too frequently politics have interfered with overwhelming evidence that having access to a firearm during times of crises significantly increases the probability for suicide,” Wintersteen said.

Captain Mark Shaver, assistant director of the Bureau of Records and Identification for the Pennsylvania State Police, is speaking now.

“And purchasing a firearm that is then used in suicide death within two weeks of purchase only happens approximately 3% of the time,” Wintersteen said. But he said that’s a national figure.
The rate in PA could be higher because there is a shorter wait time to purchase a gun.

Shira Goodman of CeaseFire Pennsylvania talking now in support of extreme risk protection orders. “It’s a process that is working in 17 other states,” she said.

Rep. Nelson: “It’s very scary in some ways. …Someone’s going to come and take someone’s guns, and the person who’s having their guns taken has not even had a chance to be heard in a court of law.”