Diver Lenford DaCosta cleans up lines of staghorn coral at a nursery inside the Oracabessa Fish Sanctuary Tuesday, Feb. 12, 2019, in Oracabessa, Jamaica. After a series of natural and man-made disasters in the 1980s and 1990s, Jamaica lost 85 percent of its once-bountiful coral reefs. But today, the corals and tropical fish are slowly reappearing, thanks in part to a series of careful interventions.

What can be saved? Back from the brink

After a series of natural and man-made disasters in the 1980s and 1990s, Jamaica lost 85 percent of its once-bountiful coral reefs. Meanwhile, fish catches declined to a sixth of what they had been in the 1950s, pushing families that depend on seafood closer to poverty.

Many scientists thought that most of Jamaica’s coral reef had been permanently replaced by seaweed, like jungle overtaking a ruined cathedral.

But today, the corals and tropical fish are slowly reappearing, thanks in part to a series of careful interventions.

“We’ve taken corals from the wild and we break them into tiny pieces and then each tiny piece grows into a new coral. So we’re basically cloning them,” said Inilek Wilmot, a marine biologist and manager of the Oracabessa Fish Sanctuary.

The delicate labor of the coral gardener is only one part of restoring a reef — and for all its intricacy, it’s actually the most straightforward part.

Convincing lifelong fishermen to curtail when and where they fish and controlling the surging waste dumped into the ocean are trickier endeavors.

“Finally, we had the fisherman coming saying, what can we do about this. Our fish catch is really going down,” says Belinda Morrow who helped organize a meeting with the fishermen in the White River fishing village.

“A lot of the international scientific community abandoned Jamaica. Well the Jamaicans couldn’t abandon Jamaica, because that was their coral reef,” says Stuart Sandin, a marine biologist at the Scripps Institution of Oceanography in La Jolla, California.

More than a dozen grassroots-run coral nurseries and fish sanctuaries have sprung up in the past decade, supported by small grants from foundations, local businesses such as hotels and scuba clinics, and the Jamaican government. 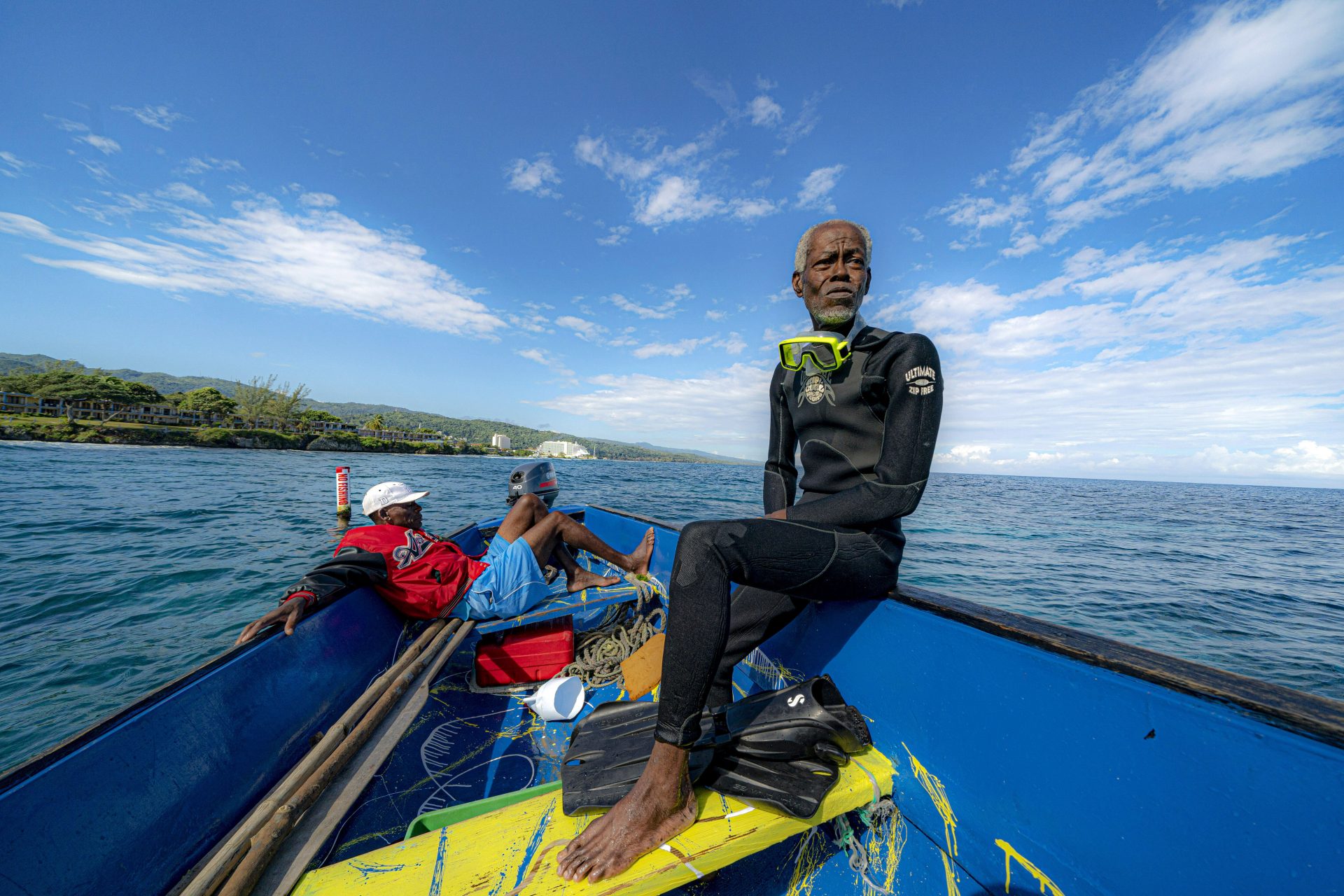 Everton Simpson, right, sits on a boat in-between dives on the White River Fish Sanctuary with Mark Lobban, left, Monday, Feb. 11, 2019, in Ocho Rios, Jamaica. More than a dozen grassroots-run fish sanctuaries and coral nurseries have sprung up on the island in the past decade.

White River Fish Sanctuary, which is only about two years old, is already seeing encouraging signs.

“When you go visit the coral at the nursery, we see a lot of fishes around. So we know the fishes are slowly coming back,” says Everton Simpson, a former spearfisherman, scuba-diving instructor, and now “coral gardener.”

But not everyone is on board. Some younger men hunt with lightweight spearguns, swimming out to sea and firing at close range. These men _ some of them poor and with few options _ are the most likely trespassers.

Patrols enforce the no-fishing zone for immature fish to grow and reach reproductive age before they are caught.

Oracabessa Bay Fish Sanctuary was the first of the grassroots-led efforts to revive Jamaica’s coral reefs. Its sanctuary was legally incorporated in 2010, and its approach of enlisting local fishermen as patrols became a model for other regions.

“Why people have bought into it is walking down to the beach and looking in the water and seeing fish,” says Wilmot. “All indicators are reef health have been positive since the sanctuary has been implemented.”

In the UK, fracking is not a thing -- so shale gas from the U.S. has become their workaround