Zoe Shipton, professor of Geology, inside her office at the University of Strathclyde in Glasgow, holding a pseudotachylite from California.

In the UK, fracking is not a thing — so shale gas from the U.S. has become their workaround 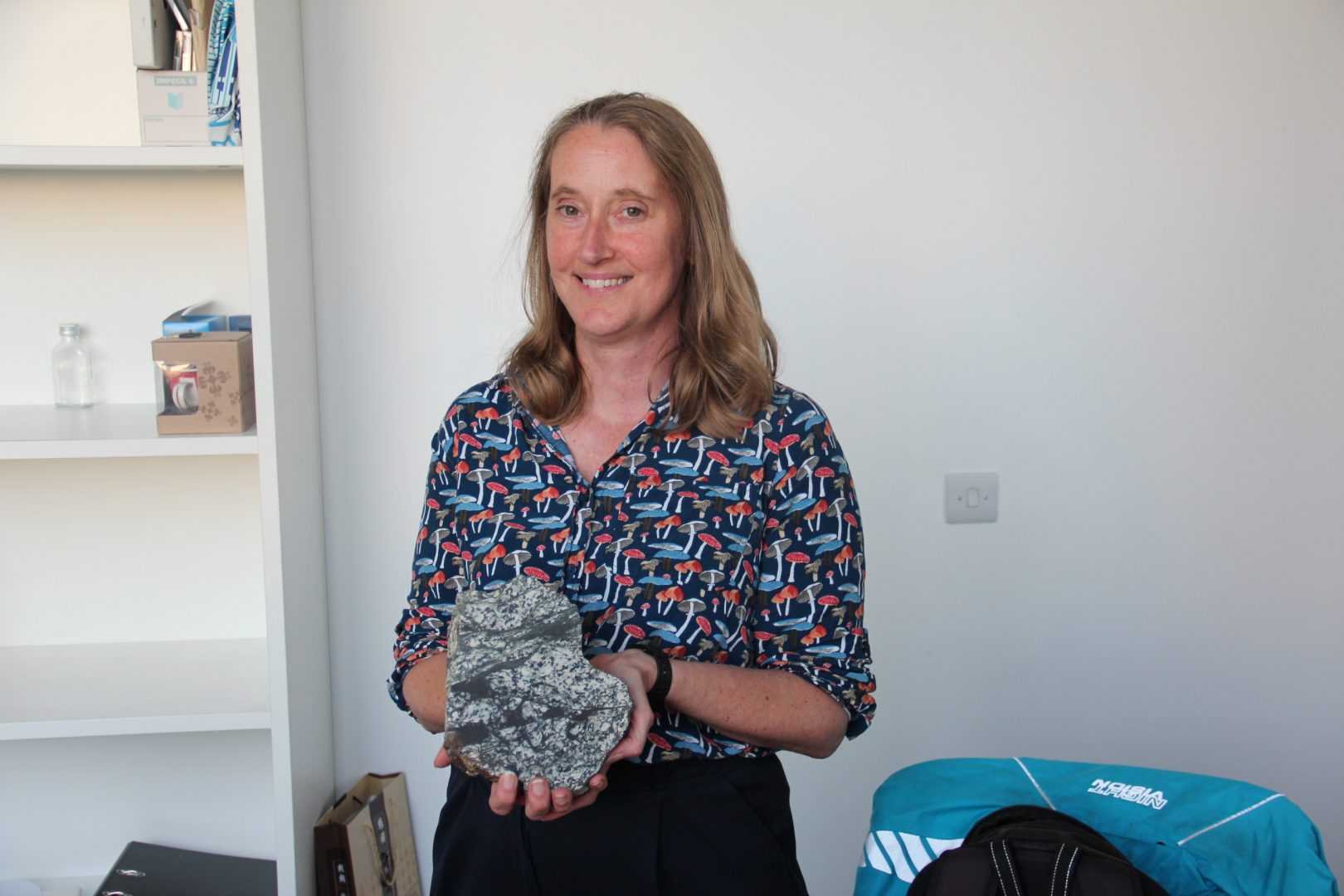 Zoe Shipton, professor of Geology, inside her office at the University of Strathclyde in Glasgow, holding a pseudotachylite from California. 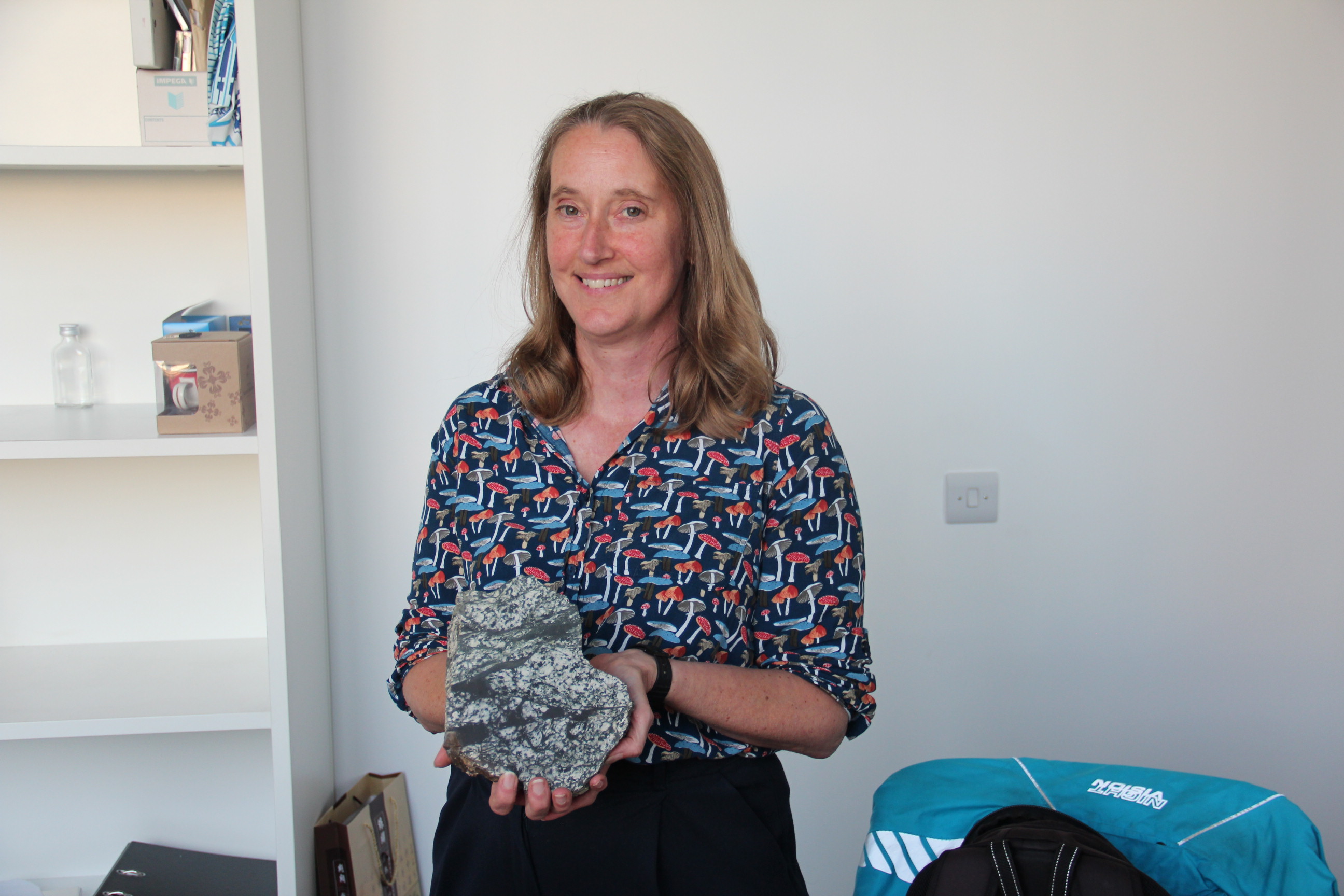 Zoe Shipton, professor of geology, inside her office at the University of Strathclyde in Glasgow, holding a pseudotachylite from California.

StateImpact Pennsylvania’s Reid Frazier is in Scotland as he follows the Marcellus shale gas overseas. Listen for his reports on the radio beginning later this month. In the meantime, follow what he’s up to through his occasional dispatches.

In a University building near the center of Glasgow, I visited Zoe Shipton one afternoon last week. Shipton is a geologist and head of civil and environmental engineering at the University of Strathclyde. She’s been around the world to study rocks of varying shapes and sizes. Her office is decorated with succulents and cacti, and of course, a lot of rocks.

When I showed up one late afternoon, she pulled out her favorite, a granite-based hunk from California’s Sierra Nevada. It was a pseudotachylite — a rock with a white base pocked with dark clumps. She said it was, essentially, a “fossilized earthquake” —the dark parts are the remnants of rocks that were melted during a seismic episode 15 kilometers below the earth’s surface.

Shipton has paid close attention to the issue of oil and gas in the British isles. In 2012, she was on a panel of the Royal Society and Royal Academy of Engineering to study the question of fracking in the UK. She said one reason why shale gas from Pennsylvania is being shipped to Scotland has to do with what is going on with fracking in Great Britain.

For decades, the United Kingdom has relied on oil and gas from the North Sea. Those fields, first developed in the 1960s and 70s, are declining. Grangemouth, the largest refinery in Scotland, is fed by a pipeline from those fields.

Shipton says INEOS has been looking for a closer domestic supply, and it’s pushed for fracking in Great Britain. But some of the first exploratory wells in the North of England caused earthquakes, and the fracking effort slowed.

The Scottish parliament has put in place a moratorium on fracking, and public sentiment in the UK is generally lukewarm to the process.

If fracking were to ever advance in the UK, Shipton said it’s an open question as to how much gas there is in British shale. That’s partially because there are many faults in Britain’s geology, making geological prediction harder.

Some of those faults are related to the pulling apart of the European and American continents. Millions of years ago, they were stuck together, but have been moving apart ever since.

“So we’ve got a bit of Maine stuck on to Scotland,” she said. “Basically anything north of Glasgow kind of is American. But we nicked it off you millions of years ago.”

(That separation is ongoing, she said — the Atlantic Ocean is widening at the same rate “as your toenails grow”.)

Another factor in assessing how much gas Britain’s shale holds, she said, is that it’s just very hard to predict where a “sweet spot” for oil and gas is.

“There is potentially quite a lot of gas underneath the UK,” she said, but until companies drill and hydraulically fracture wells in Britain, they won’t know for sure.

For now, Shipton said, INEOS has found a workaround to produce its plastics, fertilizers, and medicines: American shale.