The activists who gathered in Harrisburg brought cards emblazoned with death tolls from the major mass shootings that have happened in the US in recent years.

Ralliers gather in Harrisburg, again, to urge action on guns

(Harrisburg) — A group of activists took to the streets of Harrisburg Tuesday to drum up support — in both the state and federal government — for stricter gun laws.

The demonstration was one of many springing up statewide in the wake of the mass shootings in Texas and Ohio that killed more than 30 people.

The group gathers on this particular street corner, which borders both the state Capitol and US Senator Pat Toomey’s Harrisburg office, every week.

They coalesced under the name Tuesdays with Toomey more than two years ago in a bid to get the Republican senator to break with the president.

One of the signatures came from Dan Davenport Jr., a 38-year-old landscaper and Harrisburg native who said he’s not just concerned about mass shootings.

“A lot of the massacres are — I mean, stereotypically — white males,” he acknowledged. “But you also need to look at inner-city violence.”

It’s a brand of violence with which Davenport is familiar. He said he was shot at 16, and more recently had a friend shot to death while trying to defend his wife and daughter. 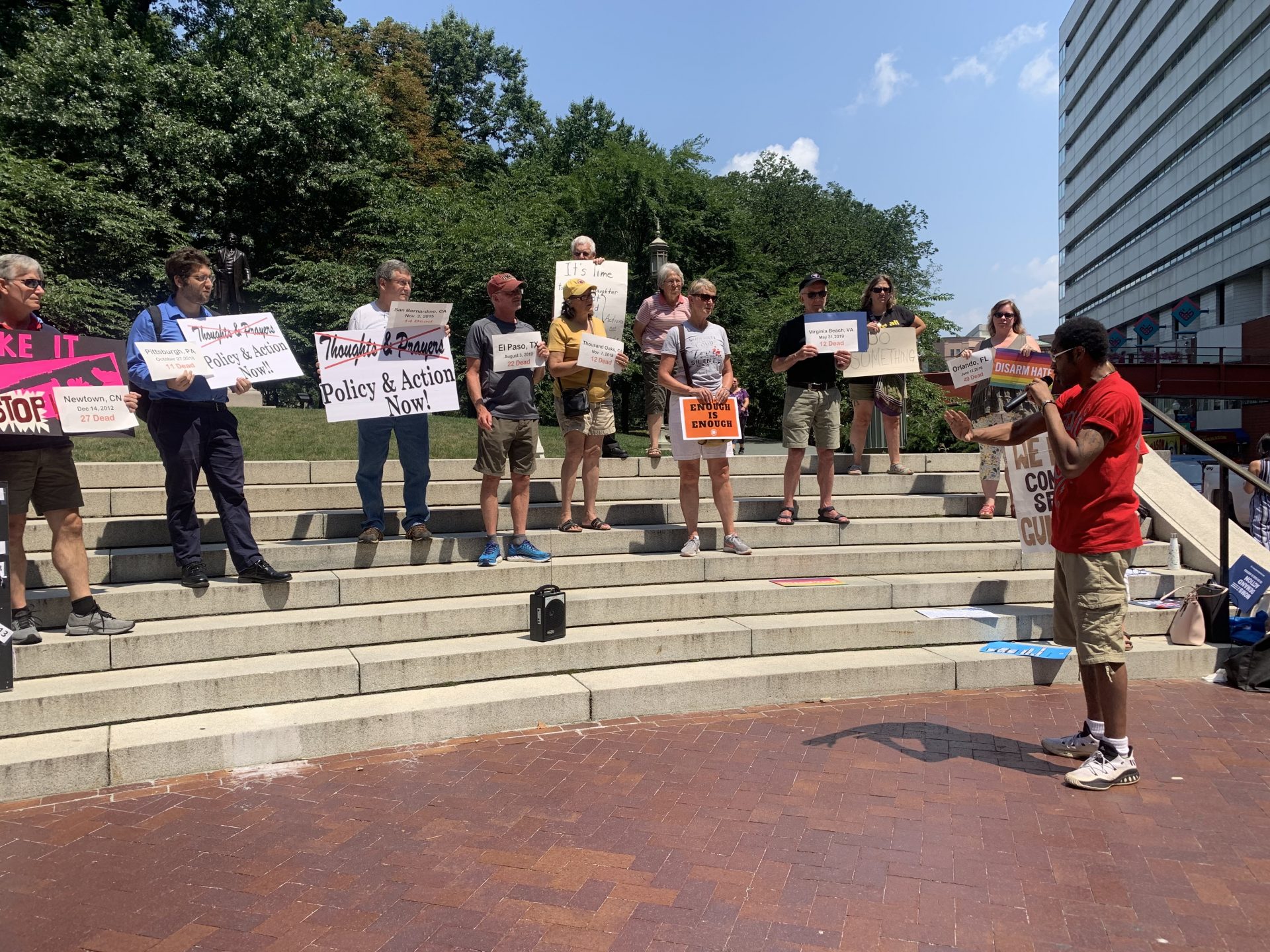 Harrisburg resident Dan Davenport Jr., who was passing by the rally, gives an impromptu speech in support of stricter gun restrictions.

In Harrisburg alone, one person was killed and five were injured in six separate shootings this weekend.

Apart from a law that makes it easier to take guns from domestic abusers, there has been no movement to tighten restrictions in Pennsylvania in recent years.

Some lawmakers have hopes for a similarly targeted bill, which would allow expedited gun seizures if a person is provably dangerous.

That concept, known colloquially as “red-flag” legislation, has gained some traction nationally as well. Toomey himself is a notable supporter.

“You ask for what you need,” she said. “We need some real common-sense gun laws that protect us from AR-15s and AR-47s. No one needs to own those in the state of Pennsylvania or across the country.

Democrats in the Pennsylvania legislature have long called for broad gun reforms.

After the protest Tuesday, at least one top Republican indicated some of those reforms might get serious consideration.

Lisa Baker, who chairs the GOP-controlled Senate’s powerful Judiciary Committee, said she intends to hold hearings on the issue “as a prelude to action.”

The rising toll from mass shootings, she said in a statement, means lawmakers should examine not only “what can be constitutionally accomplished in respect to weapons and ammunition, but the dire need to upgrade mental health services and to confront the climate of hate and bias that encourages supremacists and others to act in violent and destructive ways.”

She added, she doesn’t intend to take symbolic steps, and wants action only on plans that are workable, enforceable, and defendable in court.

After mass shootings, some Pa. Democrats urge Wolf to call a special session