V-tolls: What they are and why you might be paying them if you travel the Pa. Turnpike

Mysterious charges appeared on E-ZPass statements of Pennsylvania Turnpike customers at least 350,000 times over the course of a year.

Called V-tolls, these are $10 charges incurred by E-ZPass users when an E-ZPass transponder doesn’t get read as a vehicle exits the turnpike.

The rate for these violations was $5 until Jan. 6 of this year. As tolls rose though, the commission decided it was time to raise the V-toll rate as well.

This higher charge has drawn more people’s attention to V-tolls, as evidenced by the uptick in the number of calls coming into the E-ZPass Customer Service Center in Swatara Township.

Turnpike spokesman Carl DeFebo said V-tolls are not seen as a revenue opportunity for the financially challenged turnpike, which is carrying about a $12 billion debt load. Rather it is meant to raise a red flag for customers to look at their account to figure out why they are charged for a violation.

“This is a balancing act because we don’t want people to take advantage of the V-tolls either,” he said. “Ten dollars represents a sufficient disincentive. So while people may take advantage of that, it’s not quite as tempting to do as with a $5 V-toll.”

The turnpike collected more than $35.3 million in V-tolls just from passenger vehicles during the fiscal year that ended May 31, according to information the commission provided to PennLive. That’s nearly 7 percent of all E-ZPass revenue the turnpike collected from that type of vehicle over those 12 months.

From commercial vehicles, the turnpike took in $41.4 million in V-tolls, nearly 8 percent of all the E-ZPass revenue collected from those vehicles, during that time period.

DeFebo likens V-tolls to the price people pay when they lose their paper ticket after entering the turnpike and are assessed a fare from the farthest entry point on the toll road to where the vehicle exited it.

Most often, turnpike officials say V-tolls appear on accounts of E-ZPass customers who routinely travel just one or two exits on the turnpike on their commute to and from work and forget their transponder or have it mounted improperly. Unless a V-toll is questioned and a refund minus the appropriate toll is provided, customers who travel short distances will get overcharged.

The turnpike loses money when E-ZPass customers travel long distances and get charged a V-toll because their transponder wasn’t read when they exited the toll road. For example, DeFebo said a a customer traveling east from the Harrisburg East exit to the Fort Washington or beyond based on current toll rates would be cheating the turnpike out of money.

But that situation is more uncommon, DeFebo said. When it comes to V-tolls “most of our customers aren’t making out.”

The most frequent trigger for a V-toll charge is improper location of a transponder.

The turnpike recommends attaching it to the windshield behind the rear view mirror using the adhesive strips on it or a suction cup holder that makes it easier to remove to move to another vehicle.

DeFebo said he has witnessed motorists moving through a toll plaza waving their transponder at the unmanned toll booth. Some hold an unmounted transponder up at the wrong time for the reader to detect a signal. Some raise it up outside the conical-shaped viewing area of the equipment that reads a transponder’s signal. 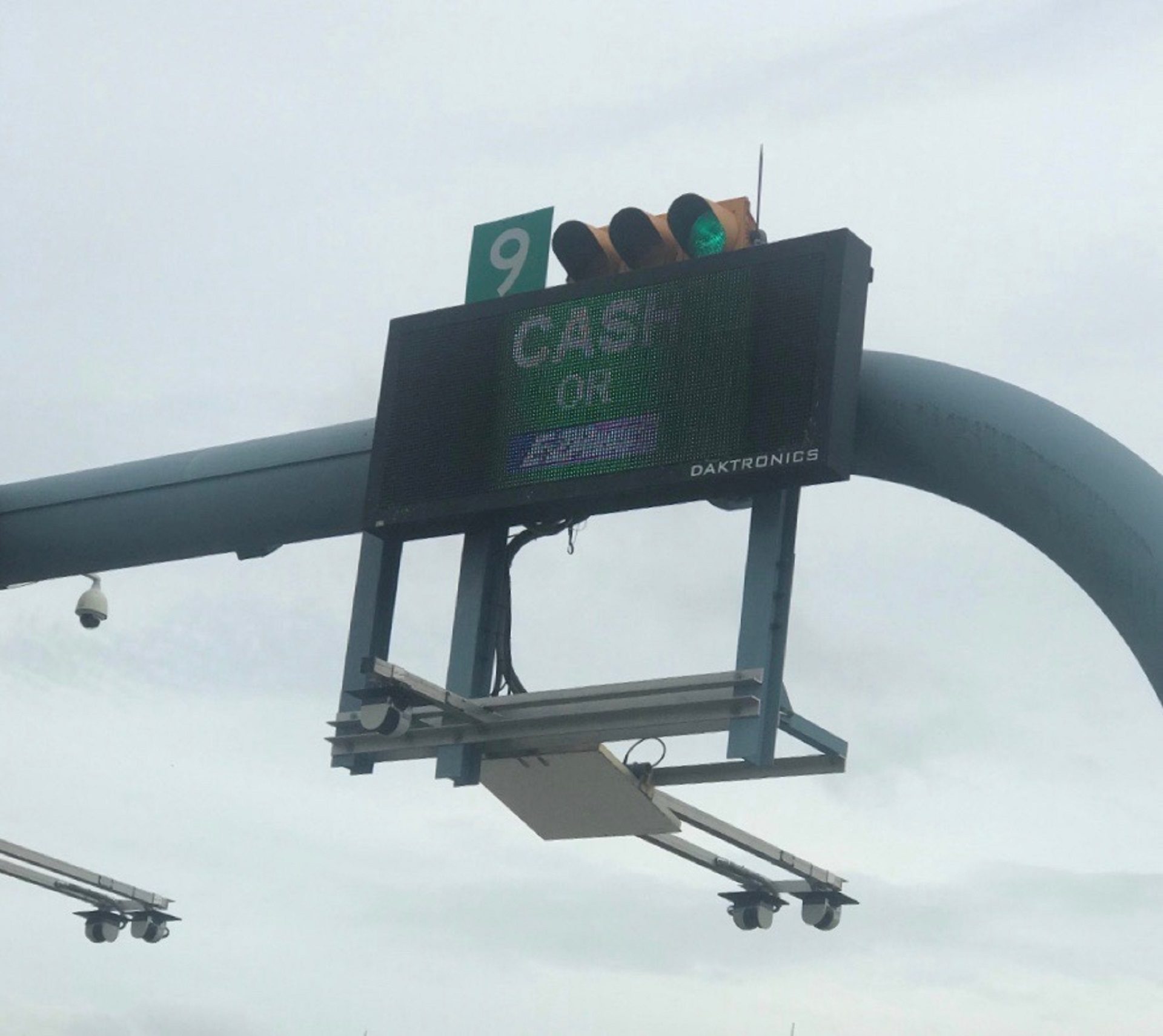 The pizza box-shaped device attached to the bottom of the sign is the equipment that picks up the signal from E-ZPass transponders that pass underneath it.

That equipment is located on the gantry a short distance before reaching the toll booth. DeFebo said it is the pizza box-shaped reader attached to the bottom of the sign that reads “E-ZPass Only No Cash.”

“There’s got to be a clear shot between the antenna and the transponder so we can accurately read it,” he said. “If it is mounted properly using the adhesive strips provided, they read like 99.9 percent of the time. It’s when they don’t have it mounted properly that we run into challenges.”

Some other issues that can arise include a dead battery in the transponder, or window tinting that can disrupt the signal. Many a customer forgot to bring the transponder along, or is using a transponder in a vehicle with a license plate number that doesn’t match one listed on the account.

Occasionally, though, DeFebo admits the problem is on the turnpike’s end, when a glitch occurs in the equipment that reads the transponder.

Speeding through a toll plaza, however, is not likely to trigger a V-toll, he said.

V-tolls: What to do about them

“It is the customer’s responsibility to monitor their accounts,” DeFebo said, repeatedly during interviews.

He suggests looking at an E-ZPass statement every month to look for V-toll charges, much as most people do with their bank or credit card statements.

Sometimes, DeFebo said, E-ZPass customer service representatives will proactively reach out to customers to let them know there is a problem if they see repeated V-toll charges on an account.

But during high travel months such as July and August, the representatives have less time to monitor accounts, he said.

As a one-time courtesy, the turnpike will adjust V-toll charges within 90 days of the date of a charge if the customer calls the service center at 1 (877) 736-6727 or stops in the Swatara Township center located at 300 East Park Drive. The walk-in hours are from 8 a.m. to 7 p.m. Monday through Friday.

The best advice DeFebo could give to avoid having to pay V-tolls appear on your statement, aside from properly mounting of the transponder, is regularly monitoring your account.

“If you look at your account and see this $10 charge and the word V-toll, you need to contact us right away,” he said.

Philly police will sign a new city contract in 2020. These activists want a seat at the negotiating table.