More than 100 people gathered at the Mother Bethel AME Church in Center City Sunday vowing to fight for reform of a police force they say isn’t accountable to the city’s people.

Philly police will sign a new city contract in 2020. These activists want a seat at the negotiating table.

"They’re not serving, nor do we feel protected."

Tanya Parker grew up hearing stories of racial profiling and police misconduct from her mother and neighbors. Her experience taught her that community — at least her own, in Strawberry Mansion — doesn’t have a strong relationship with police.

Still, Parker was left speechless when 323 active-duty Philadelphia cops were caught sharing bigoted or otherwise offensive posts on Facebook. The controversy has already put 72 police on desk duty and another 13 on track for dismissal.

“I was appalled that these people are here to serve and protect and they’re not serving, nor do we feel protected,” Parker said. 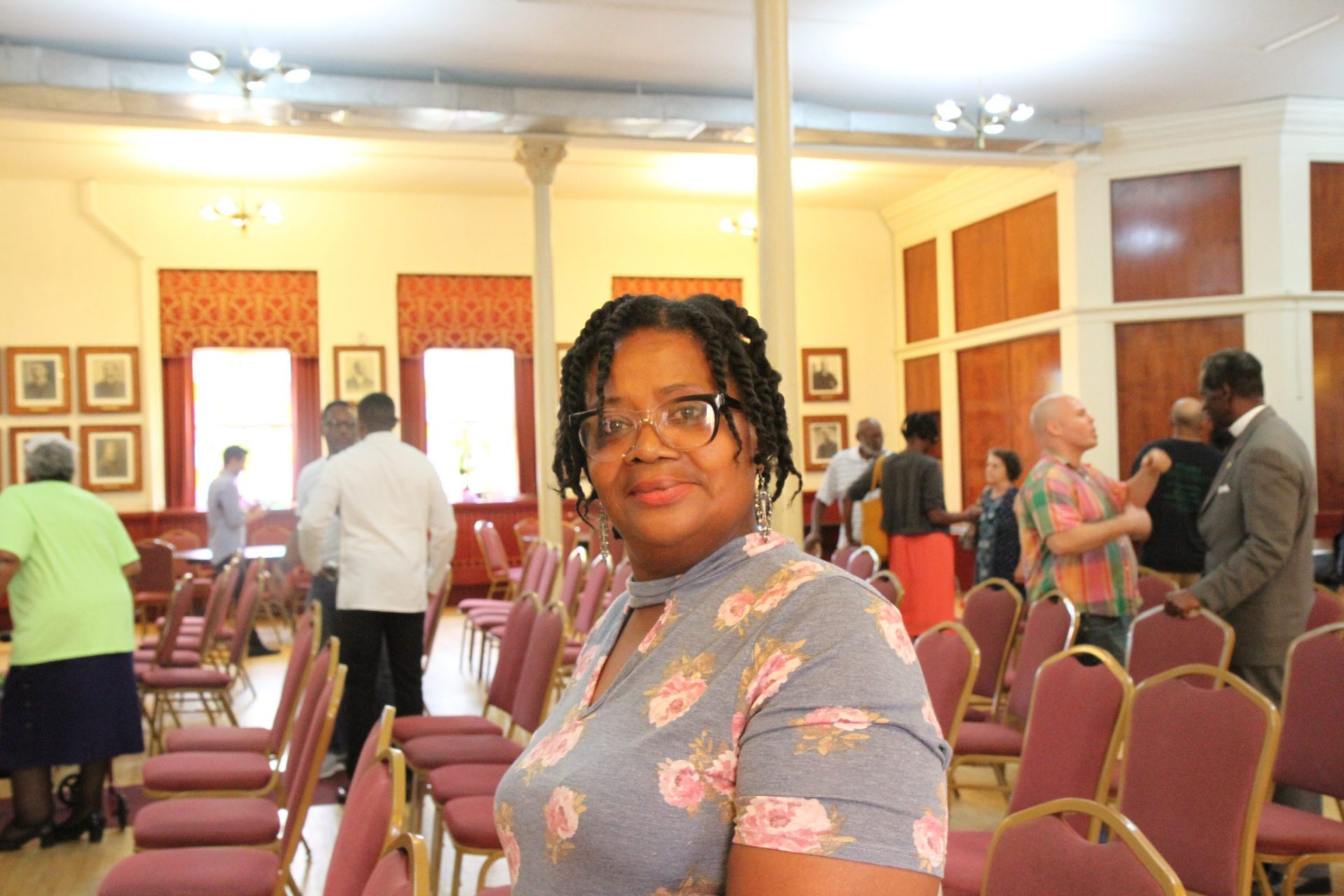 Tanya Parker was one of more than 100 people who attended a community meeting at Mother Bethel AME Church in Center City to discuss bigoted Facebook posts by Philadelphia police officers.

Parker was one of more than 100 people gathered at the Mother Bethel AME Church in Center City Sunday vowing to fight for reform of a police force they say isn’t accountable to the city’s people.

Philadelphia will renegotiate its contract with the union that represents the majority of the city’s officers in 2020. Community leaders say the new agreement brings an opportunity to make much-needed changes.

“We cannot continue to give our officers, our men and women in blue — as important as some of them are — we cannot continue to give them carte blanche to shoot our citizens in the back…and then not be held accountable through a police contract that really answers to citizens,” said Melanie DuBose, pastor of Evangel Chapel in North Philly and board co-chair of POWER, an interfaith organization and member of the Rally for Justice Coalition that organized the forum.

A call to restrict police from living outside city limits

Philly’s current police contract allows officers to move out of the city once they’ve lived in it for five years.

A 2017 Philadelphia Inquirer analysis estimated 15% of officers — more than 1,000 — had left the city since 2012, when a rule that required officers to reside within city limits was loosened. The Fraternal Order of Police, the union that represents city officers, fought for the change for years and over time, the number of police who live outside the city is expected to grow. Activists pointed to the policy change and resultant trend as a problem that needed to be addressed in the next contract negotiation.

“You should not be able to live in another county and collect tax paying dollars from hard-working Philadelphians,” Melissa Robbins said Sunday. “You must live here, you must experience day to day with us in order to be able to police us.” 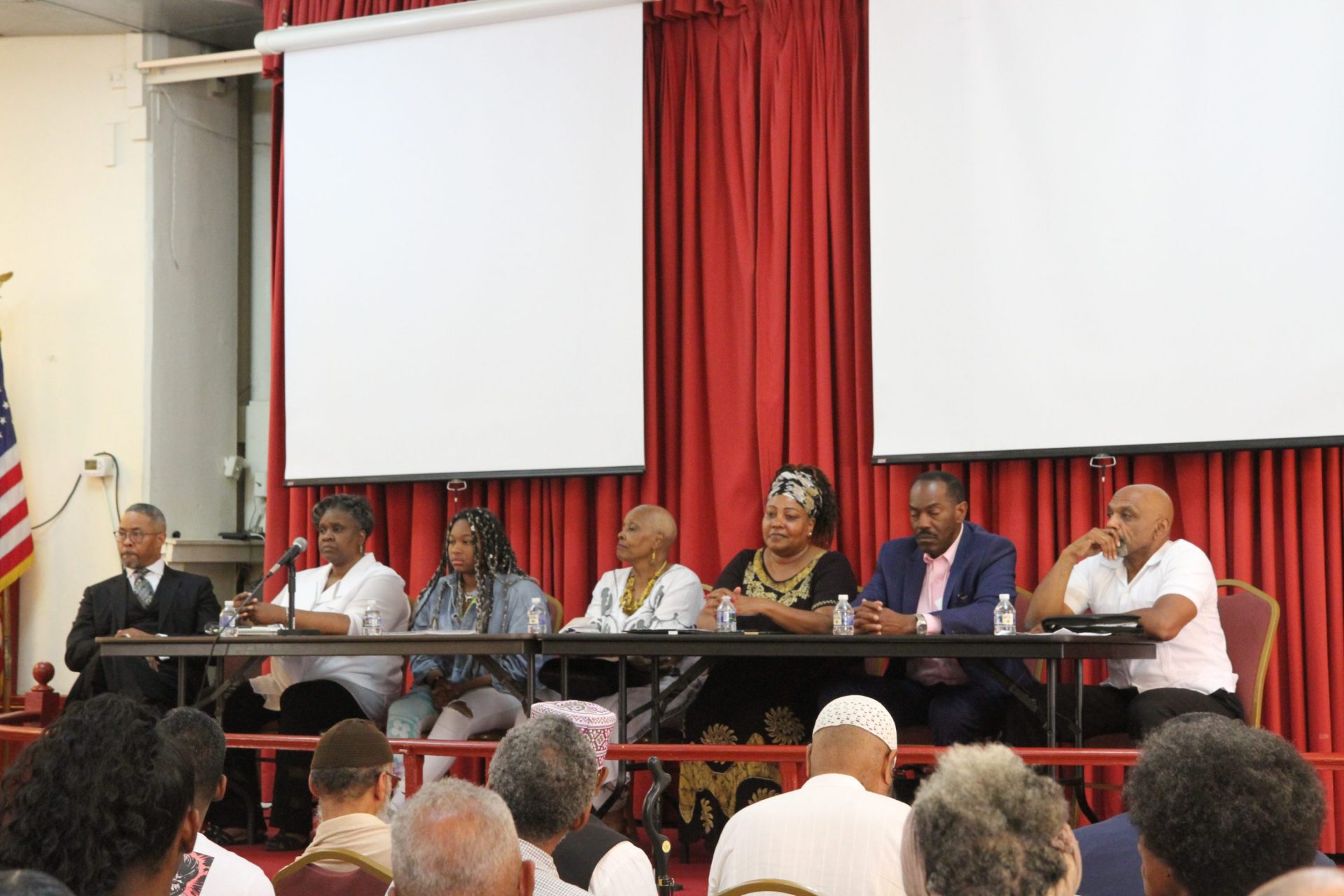 More than 100 people gathered at the Mother Bethel AME Church in Center City Sunday vowing to fight for reform of a police force they say isn’t accountable to the city’s people.

Others said the police union must be given less power over the arbitration process that governs how cops are punished by the city.

The Fraternal Order of Police has estimated that its attorneys win as many as 90%of all grievance cases, which are determined by a single arbitrator’s ruling. That translates to more than a third of police officers who were terminated in the last decade getting their badges restored, according to a Billy Penn analysis.

Mayor Jim Kenney’s administration did not push for major changes to this long-criticized disciplinary process when it negotiated the city’s current contract with the police.

“We have to stay vigilant because FOP is now going to try and work their magic while we go to sleep,” Rev. Alyn Waller of Enon Tabernacle Baptist Church said of the 13 officers set facing dismissal from the force.

In turn, residents want to strengthen the Police Advisory Commission, a city body empowered to review overall department policies but without the power to enforce judgment.

One thing most speakers and activists made clear is they don’t think all officers display the bigotry highlighted by the so-called Facebook cops. But pushing for changes in the city contract that encourage police to be more accountable to residents could result in fewer negative interactions, they said.

Another idea for increasing accountability came from Helen Gym.

The Councilmember told the crowd about a bill she aims to bring up this fall that would require the city to report any police settlements involving discrimination, harassment, or employee misconduct that exceed $20,000.

In the 2019 fiscal year, the city paid out at least $18 million in police misconduct suits, Gym said.

She said passing this bill would “require the city to demonstrate that they are taking steps to address the situation within departments and agencies so we don’t see these problems over and over again.”