Supporters of sentencing reform say next year, they may see success 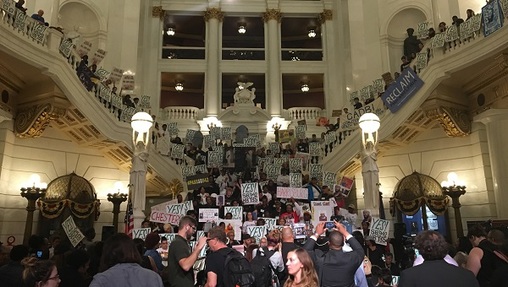 For most of the day Tuesday, ralliers crowded the hallways and open spaces of the state Capitol, calling for the parole system to be reformed. (Katie Meyer/WITF)

The night before the bill was set to be voted out of committee, sponsor Sharif Street–a Democratic Senator from Philadelphia–got word it didn’t have enough support.

“There was an inundation of suggestions from the Office of the Victim advocate that victims had a problem with the legislation, and in fact that I myself, and Representative Dawkins [the sponsor of the House’s version of the bill] were not appropriately sensitive to the concerns of victims,” Street said.

The Office of the Victim Advocate didn’t return a request for comment.

Street argued, the very communities pushing for sentencing and parole overhauls are the same ones so often impacted by violence.

Street said four of his five children have friends who were recently shot, and his oldest daughter’s boyfriend was killed.

“Injustice cannot drive out injustice,” he said. “Only justice can do that. And the justice that we’re asking for comes in the form of allowing the system to do what it should do, which is allow these cases to be reviewed.”

Street said this isn’t a death knell–the bill probably wouldn’t have passed this session anyway. He said he intends to work through any disagreements with the OVA and come up with a plan next year that can get the broadest possible support.

Apart from the Victim Advocate’s concerns, support is broad. Organizations that are usually at odds–like the often left-leaning ACLU and the conservative Americans for Prosperity–both appeared at a press conference supporting the measure.

“We are needlessly imprisoning people at cost to taxpayers,” she said.

Life-without-parole is currently the only possible sentence for people charged in Pennsylvania with non-capital first-degree or second-degree murder. And that can include people who never actually killed or intended to kill another person; they just need to have been involved in a felony in which someone died.

A recent study from the Abolitionist Law Center found that that’s one of the reasons Pennsylvania sentences more people to life in prison without the possibility of parole than any other state–and indeed, any other country–per capita.

Street’s bill would make those inmates eligible for parole after 15 years–though that doesn’t mean the Board of Probation and Parole would necessarily grant them freedom.