From the visitor center, guests at the Flight 93 National Memorial can look out over the crash site. The point of impact, however, is still closed to the public. (Lisa Wardle/WITF)

At Flight 93 memorial, a dream is realized 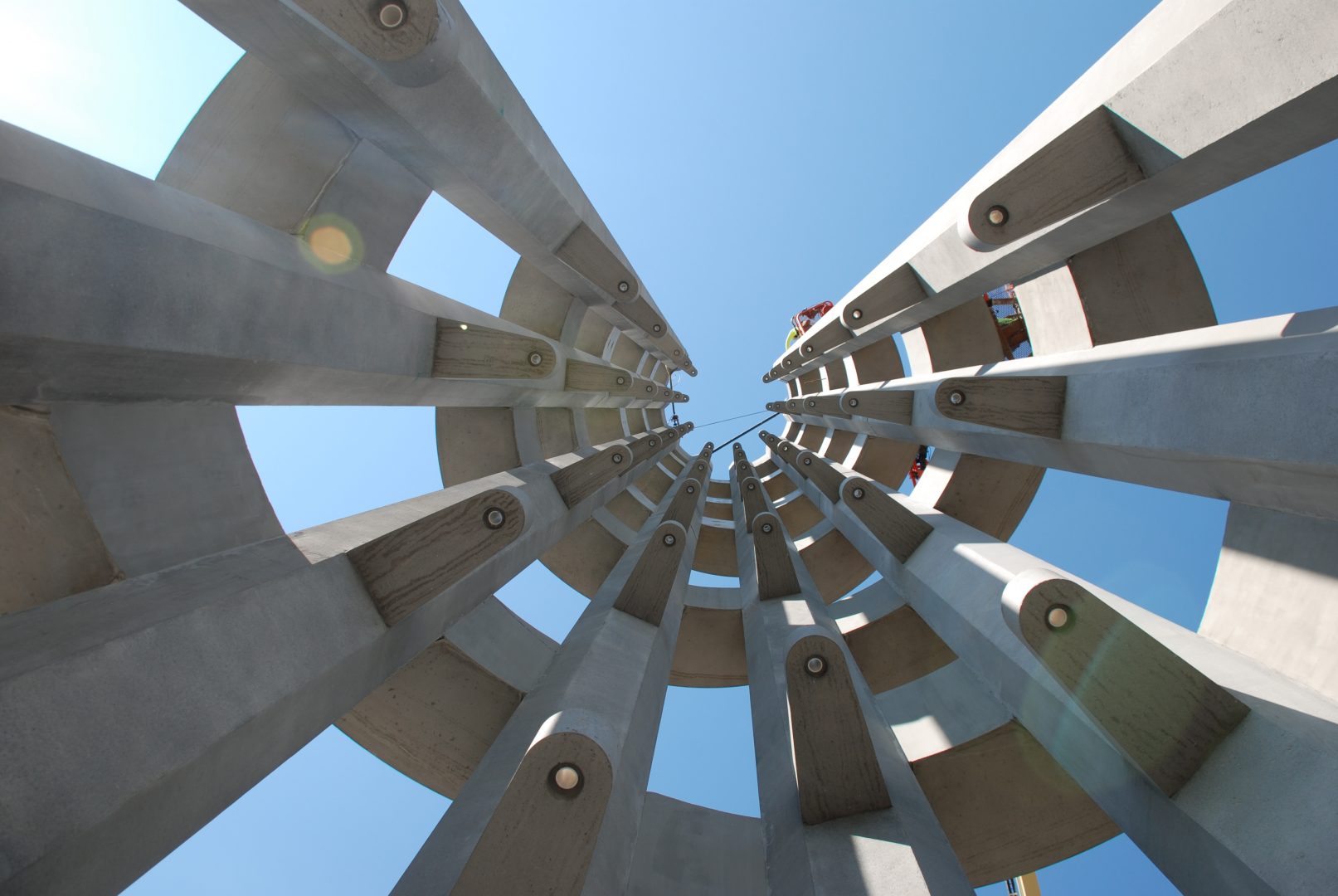 From the visitor center, guests at the Flight 93 National Memorial can look out over the crash site. The point of impact, however, is still closed to the public. (Lisa Wardle/WITF) The Tower of Voices stands 93 feet tall. At this stage of construction, the only remaining task for the crew was to attach 40 enormous wind chimes. (Lisa Wardle/WITF)

Investigators concluded some of the 40 passengers and crew had fought for control of the jetliner with the four hijackers, who were believed to have been targeting the US Capitol.

Now, a memorial honoring those 40 people who lost their lives on September 11th, 2001, is finally finished.

In the immediate aftermath of Flight 93’s crash, the ragged crater it left just yards from charred hemlock trees was the only sign something had happened.

But in the years since, a collection of monuments and buildings have risen up—almost like organic parts of the stark landscape.

A crescent of maple trees rings the memorial. And perched on a hill, the gray, angular visitor center overlooks the windswept field where the crash took place.

Closer to the crash site there’s a broad plaza and a white, marble wall inscribed with the names of the 40 heroes—as they’re commonly called—who died on the plane. And soon, there’ll be another feature: the Tower of Voices—a 93-foot tall concrete structure adorned with a wind chime for each of the 40 passengers and crew.

“It’s kind of a counterpoint to this open, horizontal, rolling landscape,” said Paul Murdoch, the architect in charge of the project. “There’s a kind of heroic quality to it that we wanted. But at the same time, hearing those chimes is a kind of personal and intimate experience.”

Murdoch has overseen the entire Flight 93 National Memorial. He won an international competition to design it in 2005, and since then, he’s worked closely with families of the victims, the National Park Foundation, and the National Park Service—which bought most of the land in 2009.

“This is probably the most challenging and the most unique piece,” he said this summer as construction on the tower neared completion. “Had we tried it day one, I’m not sure we could have done it.”

When the Tower of Voices is dedicated on September 9, it’ll mark the end of a long, sometimes difficult effort to properly commemorate the 40 Flight 93 passengers and crew.

Since the very beginning — when calls for a memorial began gaining steam—their families and friends have been at the center of the project.

Standing at the crash site just a month after the attacks, Wally Miller, the Somerset County coroner, didn’t have any concrete expectations for a monument. He just had a feeling. Miller isn’t a family member per se, but he has been a big part of the Flight 93 story ever since the day he received a call about a plane crashing near Shanksville. He has since been a close ally to the families whose loved ones he helped identify.

And on that day 16 years ago, with the war in Afghanistan about to start up halfway across the world, he saw the victims as the exact sort of heroes Americans needed to look to.

“You know, they didn’t have any directive, they just acted on their own,” he said. “It’s amazing, it really is.”

Beginning in those early days, the crash site—the final resting place of the passengers and crew—was sacred ground for their families.

Some five years after the September 11th attacks, memorial plans had started to solidify. But with those plans came potential pain—the quiet field would stop belonging solely to families.

Esther Heymann, whose stepdaughter Honor Elizabeth Wainio was killed, made it clear at the time the only thing she’d balk at would be disrupting the crash site.

“I feel so strongly protective about this impact site,” she said, choking up. “I can’t really talk about it without getting upset.”

To this day, the crater from the crash—long since healed over—is private.

A fence blocks it from the rest of the park, and only family members are allowed inside to visit the boulder that marks the impact spot.

But in 2006, even as a vision for the memorial was taking shape, funding was hard to come by and the families were getting frustrated at the lack of progress.

Ben Wainio — Honor Elizabeth’s dad — made it clear Congress needed to step up.

“You know, you talk about politicians—talk is cheap,” he said. “They said they wanted to build this memorial and fund it, but we had to fight for everything we get…to honor the forty people who helped save their lives.” Eventually, funding was secured. The national memorial has been open to the public since 2011. And as true completion has gotten closer and closer, the Flight 93 families have started grappling with something new—eventually, they’ll have to let go of the memorial. It’ll belong to everyone.

That’s what was on Debbie Borza’s mind during a 2016 visit to the crash site. Debbie Borza looks through the fence that protects the crash site during a visit in 2016. (Tim Lambert/WITF)

“Who knows,” she said. “Maybe a day will come where they decide that the sacred ground will be more open to the visitors. Who’s to say what my Muriel [her daughter] will have to say about that once I’m gone. That’ll be up to them I guess.”

Borza’s older daughter, 20-year-old Deora Bodley, was the youngest person to die in the crash.

“I guess I look at my ability to go on the sacred ground, and…that piece is still mine,” she said. “I mean it’s other family members’ too but, just speaking for myself, that is the private place that’s just for me.”

As for Paul Murdoch, the architect, this has been the biggest project he’s ever worked on. He said it feels a little surreal to be almost finished. And it feels a lot like a victory.

After the tower is dedicated on Sunday, it will be open to the public—the sounds of construction replaced, once and for all, with the voices of the chimes.