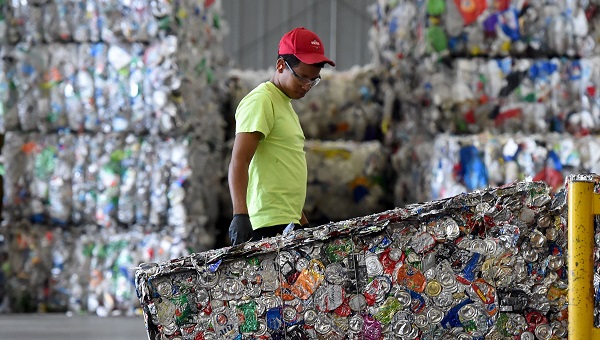 (York) – At first glance, it could be either a watermelon or a bowling ball.

It sits among a heap of rubbish, its bright green color standing out among the flavorful sights but funky smells off to the side of the drop-off floor at Penn Waste’s state-of-the-art facility in Manchester, York County.

But whether it’s coated in polyurethane or rind, the bright green orb rests in the wrong place.

The scene represents a growing problem for the country’s salvage business: “wishful recycling.”

Years of this wishful recycling phenomenon teamed with what those in the business call “impossible standards” of contamination implemented this year by China to drastically alter the environmentally conscious practice. China has long been the world’s largest buyer of recyclable materials.

What it means for you: Changes in how we recycle, especially curbside.

“We were aware that China was going to be doing something,” said April Annas, Penn Waste’s materials marketing coordinator. “We just didn’t think they’d be this drastic and actually stick with it. But it’s business as usual. We take it in, we process it, we sell it. That’s our goal.”

What exactly they’re taking in, though, has changed.

Dos and don’ts for your recycle bin

According to Penn Waste, cans (aluminum and steel), plastic bottles and jugs (Nos. 1, 2 and 5), clean and dry newspaper, glass bottles and jars, dry and flattened cardboard, and cartons can and should be placed in your recycle bin.

Here’s what you should not be putting in those bins: plastic bags, loose or shredded paper and envelopes, cereal boxes, plastic bottles and jugs (Nos. 3, 4 and 7), medical waste, Styrofoam, scrap metal, food-soiled or otherwise contaminated newspaper and cardboard.

“I’ve seen everything from tricycles to mattresses to animal carcasses, believe it or not,” Annas said. “Electrical cords, Christmas lights, garden hoses, wire. It’s a pain in the butt.”

The long, loose cords, hoses and wires, she said, wrap around Penn Waste’s equipment and require tiresome cleanup. Shredded paper falls through the machines and can muck up the system.

“We’re not pulpers,” she said.

The changes are in part to clean up their contamination levels, though China’s new standards — dropping from 5 percent contamination per bale to 0.5 percent beginning Jan. 1 — are seen as unattainable.

“The new standard is impossible to meet,” said Amanda Davidson, Penn Waste’s director of marketing. She estimates that, right now, upwards of 20-40 percent of what we place in our recycle bins is actually trash.

So, while recycling centers push to clean up their bales, United States and other countries are shopping for new markets, like in Indonesia or Vietnam, Annas said, to send their collections.

“Maybe we change our material pack a little bit,” Annas said, “but we keep it moving.”

This brings us back to wishful recycling.

It wasn’t terribly long ago — maybe a generation or so ago — that Americans barely recycled.

But a campaign to be more environmentally conscious worked extremely well, training consumers to differentiate between trash and recycling over several decades.

More and more, though, the consumer’s line has been blurred. Way too much trash is absentmindedly tossed in with recycling materials.

“Wishful recycling is what caused this crisis,” Davidson said. “That’s why we’re telling people, ‘When in doubt, throw it out.'”

She said the list of recyclables are basically a living document, updated regularly to reflect what materials are able to be recycled.

Part of that is company’s like hers finding a market for particular items.

The changes with China, she said, are forcing companies to go back to the basics in terms of recycling guidelines.

“As a society, we’ve all been too reliant on China,” Davidson said. “We all need to take more responsibility, both by buying products made in the U.S.A. and by being more careful with what we place in our recycling bins.”

Refillable water bottles and reusable shopping bags are small changes that can make big impacts on an individual basis, she said.

And these changes do not mean a consumer or business cannot recycle items like paper, plastic bags, clothing, medical waste and such that should not be placed in curbside bins.

Take plastic bags to grocery stores to recycle, for example. Haul old clothes (that are still wearable) to thrift stores. You can also hand-deliver items to companies that accept certain types of items like paper and medical waste.

“A lot of it is going to be up to individuals’ due diligence,” said Ellen O’Connor, spokeswoman for the York County Solid Waste Authority.

Beyond your neighborhood trash/recycling company website, Davidson suggested a go-to database for thorough information on recycling, including items like batteries, automotive parts, paints, and indoor/outdoor supplies, is