Gov. Josh Shapiro at his swearing-in. As one of his first acts as governor, he has loosened his predecessor's gift ban. 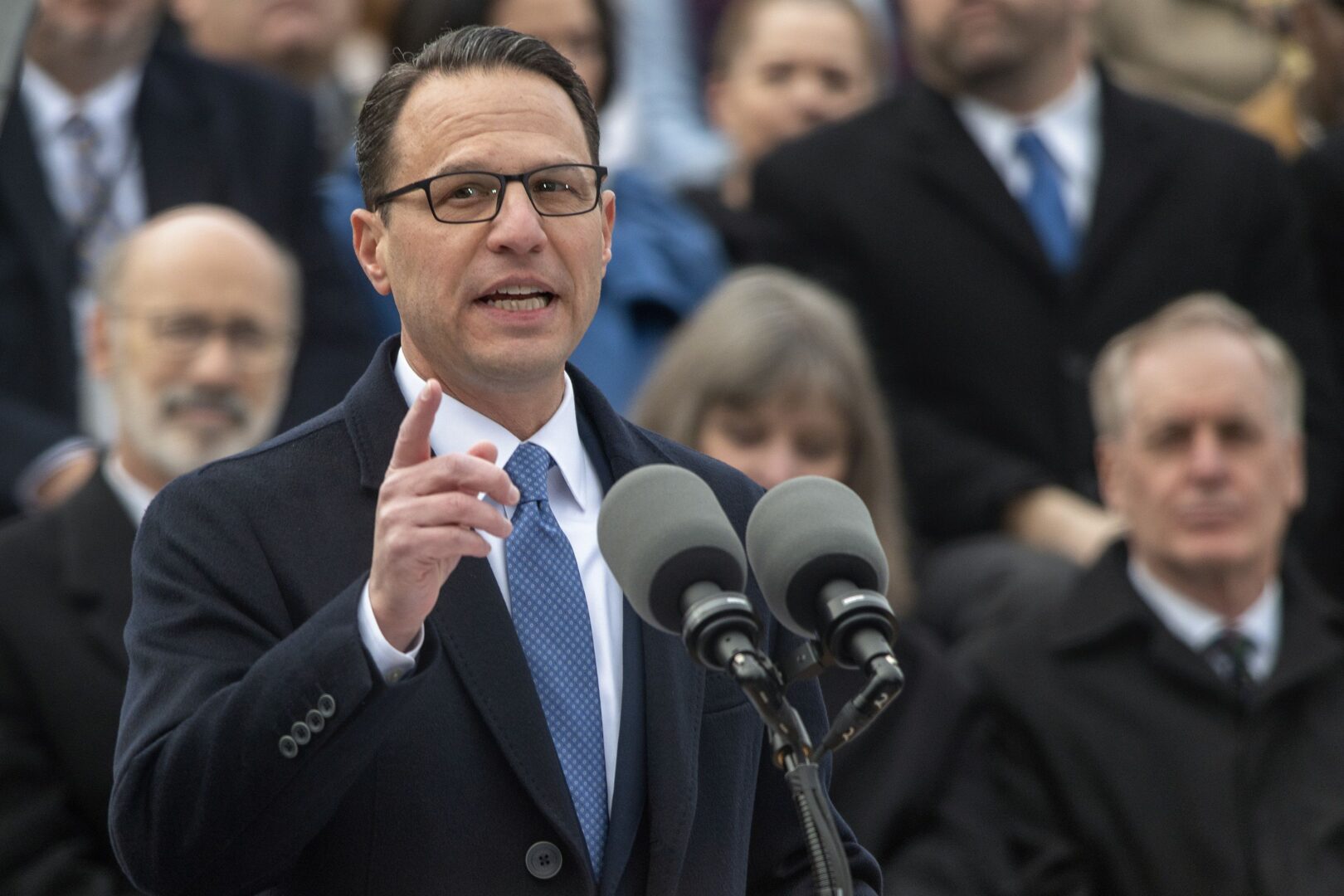 Gov. Josh Shapiro at his swearing-in. As one of his first acts as governor, he has loosened his predecessor's gift ban.

Top officials for Pennsylvania’s governor are now allowed to accept an occasional free lunch while on duty.

In one of the first notable changes of his new administration, Democratic Gov. Josh Shapiro announced Friday that he has loosened a gift ban that was put in place since the start of his predecessor, Democratic Gov. Tom Wolf’s, eight-year tenure.

Wolf’s gift rules were notoriously strict, and mandated that officials pay cash if they accepted items like disposable water bottles.

Shapiro’s version allows employees to accept food or refreshments when “representing the Commonwealth in an official capacity” worth as much or less than the federal government’s per diem rate. Those rates already serve as the basis for other state public service compensation levels — for instance, they’re the model for state House and Senate members’ per diem rates.

The exact numbers vary by meal and location, ranging from as low as $13 to as high as $36.

Shapiro also increased the number of exceptions to the gift ban. State employees can now accept plaques or certificates for awards; promotional gifts such as pens, mugs, t-shirts, and calendars; and gifts of nominal value to mark a big life event such as marriage, illness, or retirement.

However, the policy otherwise keeps in place a ban on state employees taking cash, event tickets, travel, and other larger gifts from anyone attempting to influence state action. Shapiro clarified that this is still a “complete and total zero-tolerance policy towards lobbyists,” but that commonwealth employees should feel comfortable “getting a cup of coffee” with their constituents.

“We have to talk again, we have to have meaningful dialogue again,” said Shapiro in a news conference on Friday.

In addition, members of Shapiro’s cabinet, his office staff, and senior agency employees — about 3,500 people altogether — will have to take an ethics training course. They also must sign an integrity pledge saying that they will “place the interests of the Citizens of the Commonwealth above their own” and “safeguard all confidential or protected information within their possession or access,” among other requirements.

Khalif Ali, executive director of Common Cause — a good-government group that advocates for transparency — said that he has no problem with the loosening of Wolf’s policies but cautioned that increased transparency may be necessary.

“In one way I think it’s excellent he’s getting out there immediately and setting a precedent for ethics,” said Ali. “If there is a lessening of restrictions [for] the lower rung of gifts that are given, it’s still an opportunity for those gifts to be reported and for the public to know about those gifts.”

However, Democrats, Republicans, and newspaper editorial boards have all noted that the Shapiro administration has already been less transparent than some of Shapiro’s predecessors, Wolf and former Republican Gov. Tom Corbett,

For instance, the new governor is breaking with precedent set by Wolf and Corbett by declining to disclose the private donors who funded his inaugural festivities.

When asked at a recent news conference if he plans to make the donors’ names public, Shapiro said only that he plans on “following the law” when reporting funding details.

Shapiro also had over 300 members of his gubernatorial transition team sign nondisclosure agreements that barred them from discussing political strategy, phone logs, and other information, at risk of a heavy fine. That penalty was stricter than the one Wolf imposed.

Wolf’s own employees, as well as the lawmakers and lobbyists who need to interact with them, have criticized his stringent gift ban over the years.

His policy banned state employees from receiving a “gift, gratuity, favor, entertainment, hospitality, loan or any other thing of monetary value” from anyone regulated by or under contract with the state, or from anyone with “interests that may be substantially affected by the performance or nonperformance of the official duty of the employee.”

Several former Wolf administration officials told Spotlight PA that in practice, the rule was so strict it led to employees skipping meals with community groups.

One former staffer, who requested anonymity to speak candidly, also noted that Wolf, unlike most of his employees, is independently wealthy and could afford to reimburse any expenses footed by an outside group, as his policy required.

J.J. Abbott, a political consultant and former spokesperson for Wolf, noted that the rule was enacted amid a string of ethics scandals starring Corbett and state legislators. Corbett accepted tickets to big sporting events as well as a yacht trip from individuals with policy priorities in front of the state government.

With that as the backdrop, it was “the right thing to do from the perspective of showing the differences between the Wolf administration and what people thought of Harrisburg,” Abbott said.

Looking back, Abbott acknowledged that the strictness of the ban may have limited staffers’ ability to conduct community outreach outside of Harrisburg, and network within the city’s political circles. But keeping it in place was still necessary to avoid ethical lapses when dealing with powerful lobbies seeking accommodations on their pet policies, he argued.

“The gift ban doesn’t need to apply to the rotary club lunch,” Abbott said. “It needs to apply to big money interests trying to take you out to sporting events.”

Unlike the executive branch, the Pennsylvania General Assembly has few rules or restrictions on gifts to lawmakers besides a ban on cash gifts and mandatory yearly reporting.

Michael Pollack, executive director of good-government group March on Harrisburg, has protested and prodded lawmakers over the years to tighten state ethics rules.

While Shapiro’s policy was a slight roll back, Pollack thought it resembled many bills the group has backed in the legislature that would tighten gift standards for lawmakers.

“While it is less than Governor Wolf’s zero exceptions bill, this might be relatable for a lot of legislators,” Pollack said.

He said he hopes Shapiro uses his term to engage the General Assembly on broader changes to ethics guidelines such as implementing campaign finance restrictions and tightening rules for state employees seeking private employment after public service.

Warning of a health care 'company town,' officials and advocates urge efforts to rein in UPMC