What are the books that would make great holiday gifts this year? 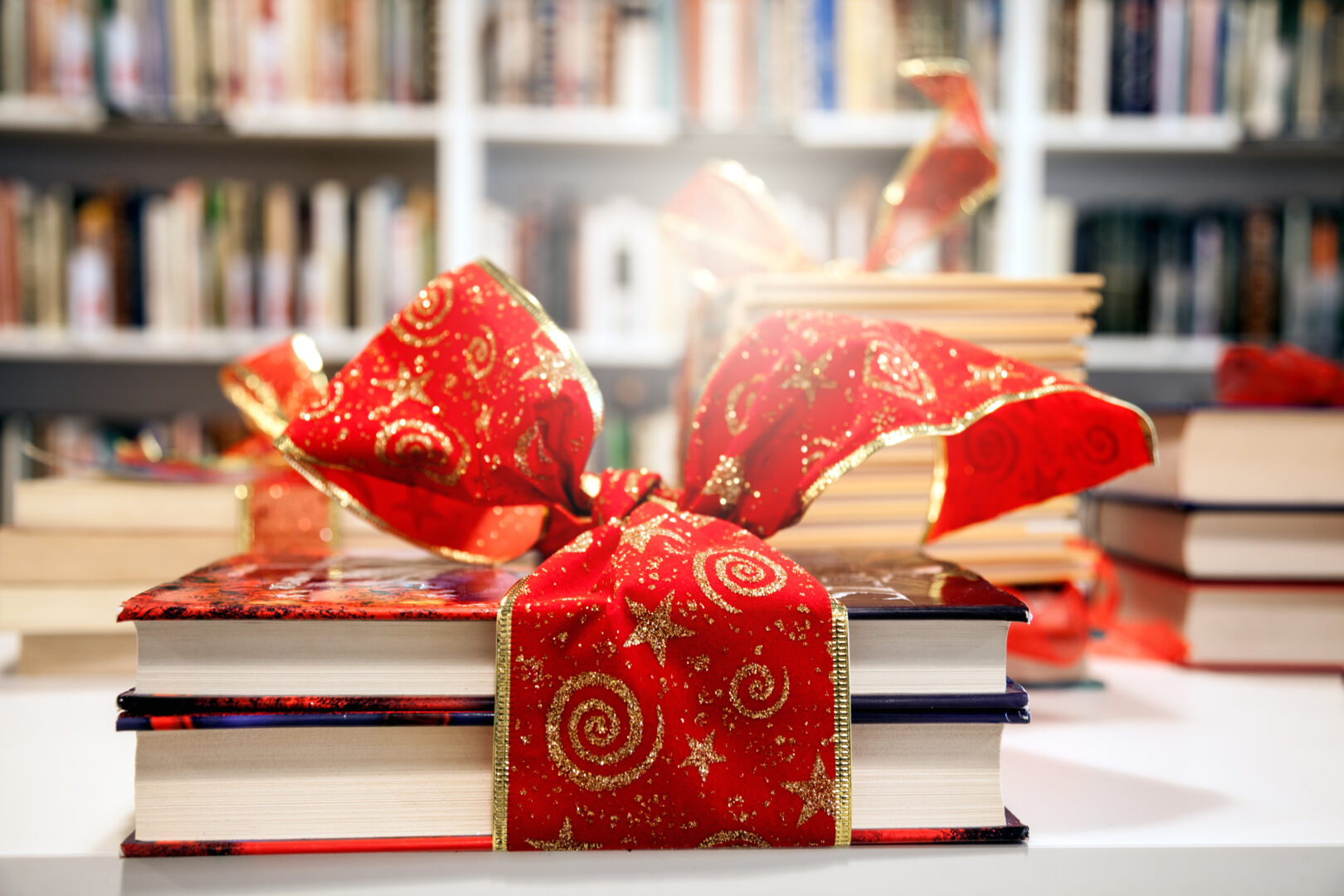 Thanksgiving is the day after tomorrow and then Black Friday — when attention turns to finding the perfect holiday gift. A book or two or three would fit that description of the perfect gift. On today’s program, we look to “spark” ideas about the books that would make great holiday gifts this year. It has become a tradition on WITF to assemble our panel for book recommendations and ask you about your favorites too. On The Spark Tuesday are 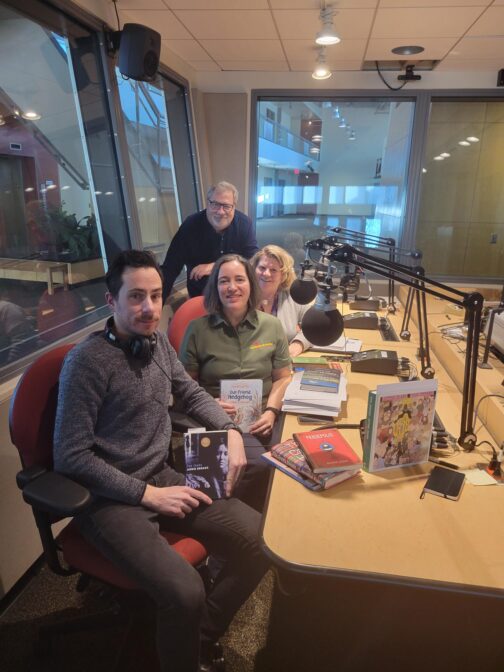 Catherine Lawrence, co-owner of the Midtown Scholar Bookstore in Harrisburg

Send your recommendation or questions about books to thespark@witf.org

Rest is Resistance: A Manifesto, by Tricia Hershey

The Philosophy of Modern Song, by Bob Dylan

Path Lit by Lightning: The Life of Jim Thorpe, by David Maraniss

Sea of Tranquility: A Novel, by Emily St. John Mandel

Tread of Angels, by Rebecca Roanhorse

Our Friend Hedgehog: A Place To Call Home, by Harrisburg’s Lauren Castillo

A Bird Will Soar, by Pennsylvania’s Alison Green Myers

+ Free LIVE ILLUSTRATION and STORYTIME at the Midtown Scholar, Sat. Nov 26th, 10am

Walking: My Life in the Movies and Other Diversions by Steve Martin In this illustrated memoir of his forty years in the movie biz, the Academy Award-winning actor, using his unparalleled wit, shares anecdotes from the sets of his beloved films, bringing readers directly into his world, capturing the everyday moments that make up a movie stars life.

The Magic Kingdom by Russell Banks In 1971, a property speculator records his life story, reflecting on his time in a community of Shakers in Florida, which saved his family from complete ruin, and meditating on youth, belief, betrayal, Florida’s everchanging landscape and the search for an American utopia.

Marie Kondo’s Kurashi at Home: How to Organize Your Space and Achieve Your Ideal Life by Marie Kondō Inspired by the Japanese concept of kurashi, or way of life, the #1 best-selling sensation and Netflix star, in this beautiful guide, empowers you to embrace what you love about your life and then reflect it in your home, activities and relationships.

100 Countries, 5000 Ideas: Where to go, When to go, What to see, What to do by National Geographic Society (U.S.) An updated guide to help globetrotters plan their next adventure includes 5,000 ideas for things to see and do in 100 countries from paddling Ha Long Bay in Vietnam to Visiting Dinan, France’s only walled city. Also Recommended: Lonely Planet Offbeat: 100 Great Places Away From the Tourist Trail Books as Holiday Gifts – Preview at Your Public Library! November 2022

The Art of the Board: Fun & Fancy Snack Boards, Recipes & Ideas for Entertaining All Year by Olivia Carney Features 75 fun and fancy seasonally inspired snack boards and recipes, and is packed with step-by-step how-tos, handy tips, and festive ideas to help even the most hopeless host elevate their entertaining all year long. Not sure where to start? No problem! The in-depth introduction will walk you through all the important facts when it comes to equipment and ingredients.

The LEGO Story: How a Little Toy Sparked the World’s Imagination by Jens Andersen Through interviews with the founding family that still owns the company and with access to the vast LEGO archive this definitive story behind one of the most beloved brands on the planet doubles as a cultural history of changing generations view of childhood and the importance of play.

A World of Curiosities by Louise Penny Chief Inspector Gamache investigates after a 150-year-old letter points to the discovery and opening of a bricked-up room in an attic that’s filled with curiosities, in the 18th novel of the series following The Madness of Crowds. Books as Holiday Gifts – Preview at Your Public Library! November 2022

The Librarian Always Rings Twice by Marty Wingate The curator of Lady Georgiana Fowling’s collection of Golden Age of Mystery Writers first editions, Hayley Burke must protect her late benefactor’s legacy when a strange man arrives, claiming to be her grandson, which leads to murder and scandal.

The Hike to Home by Jessica M. Rinker Stuck in Newbridge, New Jersey, for the summer, Lin Moser, who lives on the road with her house-flipping parents, learns of an ancient ruined castle in the woods that no one has been able to find and embarks on her biggest adventure yet.

The Lights That Dance in the Night by Yuval Zommer In this wonderfully festive picture book, the author cleverly imagines the Northern Lights’ fleeting journey from space to Earth and how they weave a special magic for the animals and people living in the frozen lands below. Books as Holiday Gifts – Preview at Your Public Library! November 2022

Night Lunch by Eric Fan Inside this elegant, horse-drawn establishment, a feathery cook works the grill, serving up tasty dishes for shift-workers and operagoers alike…As the evening’s service winds down, weary Owl spots trembling Mouse. Has he found his own night lunch, or will he invite this small sweeper inside for a midnight feast for two?

Little Tractor and the Christmas tree by Natalie Quintart Sharing an environmental message, this Christmas story finds Little Tractor searching for the perfect tree to decorate, but when he finds it, he discovers the young fir might not want to be a Christmas tree after all. Illustrations.

Strangers to Ourselves, by Rachel Aviv (2022). Rachel Aviv’s fascinating new book puts into language a lot of the complexities and complications surrounding how we think and talk about identity when it comes to mental health and mental illness. From publisher: “The acclaimed, award-winning New Yorker writer Rachel Aviv offers a groundbreaking exploration of mental illness and the mind, and illuminates the startling connections between diagnosis and identity.”

Gods of Soccer, by Men in Blazers (Roger Bennett, Michael Davies, Miranda Davis, and Nate Kitch) (2022). This past Sunday kicked off the politically-divisive but nonetheless sporting enthralling 2022 World Cup, the biggest sporting event on the planet. The great soccer show Men in Blazers have put out a book about our favorites in soccer to celebrate. From the publisher: “From the hosts of the popular podcast and tv show Men in Blazers, comes their completely scientific, 100% definitive, defend-to-the-death list of the greatest soccer players of all time.”

Inciting Joy, by Ross Gay (2022). In 2019, a student and myself saw Ross Gay read at Midtown Scholar from his then new book, Book of Delights, a masterful collection of essays about things that brought Gay joy. This is his follow up, describing the way things bring joy into our lives, from basketball to gardening. From publisher: “In these gorgeously written and timely pieces, prizewinning poet and author Ross Gay considers the joy we incite when we care for each other, especially during life’s inevitable hardships.”

Acting Class, by Nick Drnaso (2022). Nick Dranso’s second book, Sabrina, was the fist comic book finalist for the Booker Prize, the most esteemed English language literary prize. Acting Class is his follow up, using the incredibly powerful intimate and vulnerable imaginative energies of an acting class to follow a cast of characters as they try to connect and disconnect, get lost and find one another. From publisher: “Ten strangers are brought together under the tutelage of John Smith, a mysterious and morally questionable leader. The group of social misfits and restless searchers have one thing in common: they are out of step with their surroundings and desperate for change.”

Ducks, by Kate Beaton (2022). Some of the most powerful personal stories take on the most important shared stories humans are trying to tell, solve, and set down. Kate Beaton’s first fulllength graphic novel takes narrates her own story working in the oil sands, and also our shared economic and climate story. From publisher: “Ducks: Two Years in the Oil Sands is an untold story of Canada: a country that prides itself on its egalitarian ethos and natural beauty while simultaneously exploiting both the riches of its land and the humanity of its people.”

The Complete Persepolis, by Marjane Satrapi (2007). It is painful watching the news in Iran about protests that emerged in response to heinous violence, and which are then responded to with more violence. I am reminded of Marjane Satrapi’s masterful graphic memoir Persepolis, an account of her young life growing up 40 years ago during a different revolution in Iran. From publisher: “Persepolis is the story of Satrapi’s unforgettable childhood and coming of age within a large and loving family in Tehran during the Islamic Revolution; of the contradictions between private life and public life in a country plagued by political upheaval.”

Frank: Sonnets, by Diane Seuss (2021). Hands down one of the most brilliant and moving books of poetry I’ve read in years, so I was not shocked this book won the 2022 Pulitzer Prize for Poetry, and many other awards. Sonnets in the loosest sense, in the poems in 14 lines sense, in the tradition of art stretching back centuries. Accessible in the way a sunrise is accessible. From publisher: “These poems tell the story of a life at risk of spilling over the edge of the page, from Seuss’s working-class childhood in rural Michigan to the dangerous allures of New York City and back again.”

The Hurting Kind, by Ada Limón (2022). In 12 July 2022, Ada Limón was named the 24th Poet Laureate of the United States by the Librarian of Congress—and so the first Latina to be Poet Laureate of the United States. I’ve followed her poetry for years, and often gift her collections to friends. The Hurting Kind is her sixth collection. From publisher: “An astonishing collection about interconnectedness—between the human and nonhuman, ancestors and ourselves— from National Book Critics Circle Award winner, National Book Award finalist, and U.S. Poet Laureate Ada Limón.”

The Candy House, by Jennifer Egan (2022). A sequel to Jennifer Egan’s 2011 Pulitzer Prizewinning work of fiction A Visit from the Good Squad, The Candy House is one of those finish it breathlessly in a weekend sort of books—even though it covers the most fascinating and complex ideas about technology and the self we are wrestling with today. From publisher: “Egan introduces these characters in an astonishing array of narrative styles—from omniscient to first person plural to a duet of voices, an epistolary chapter, and a chapter of tweets. Intellectually dazzling, The Candy House is also a moving testament to the tenacity and transcendence of human longing for connection, family, privacy, and love.”

The Years, by Annie Ernaux (2008). Annie Ernaux was the winner of the 2022 Nobel Prize for literature. Until the prize announcement, I had not read Ernaux’s work. This month I began reading her 2008 book The Years—in translation shortlisted for the 2019 Booker Prize—and it has immediately been one of the most stunning literary experiences I’ve had in the form of the novel. A book I want to read slowly, to experience like a falling leaf or someone I love. From publisher: “The Years is a personal narrative of the period 1941 to 2006 told through the lens of memory, impressions past and present—even projections into the future—photos, books, songs, radio, television and decades of advertising, headlines, contrasted with intimate conflicts and writing notes from 6 decades of diaries.”

Razorblade Tears by S.A. Cosby (2021). My aunt Sandy reads more books than anyone I have ever known—even after my decades of graduate school and working in publishing—and she often reads very different books than me: thrillers. This new book by S.A. Cosby is one of Sandy’s personal favorites. Barack Obama agrees. From publisher: “A Black father. A white father. Two murdered sons. A quest for vengeance.”