The case is an example of how misinformation fills an information void. 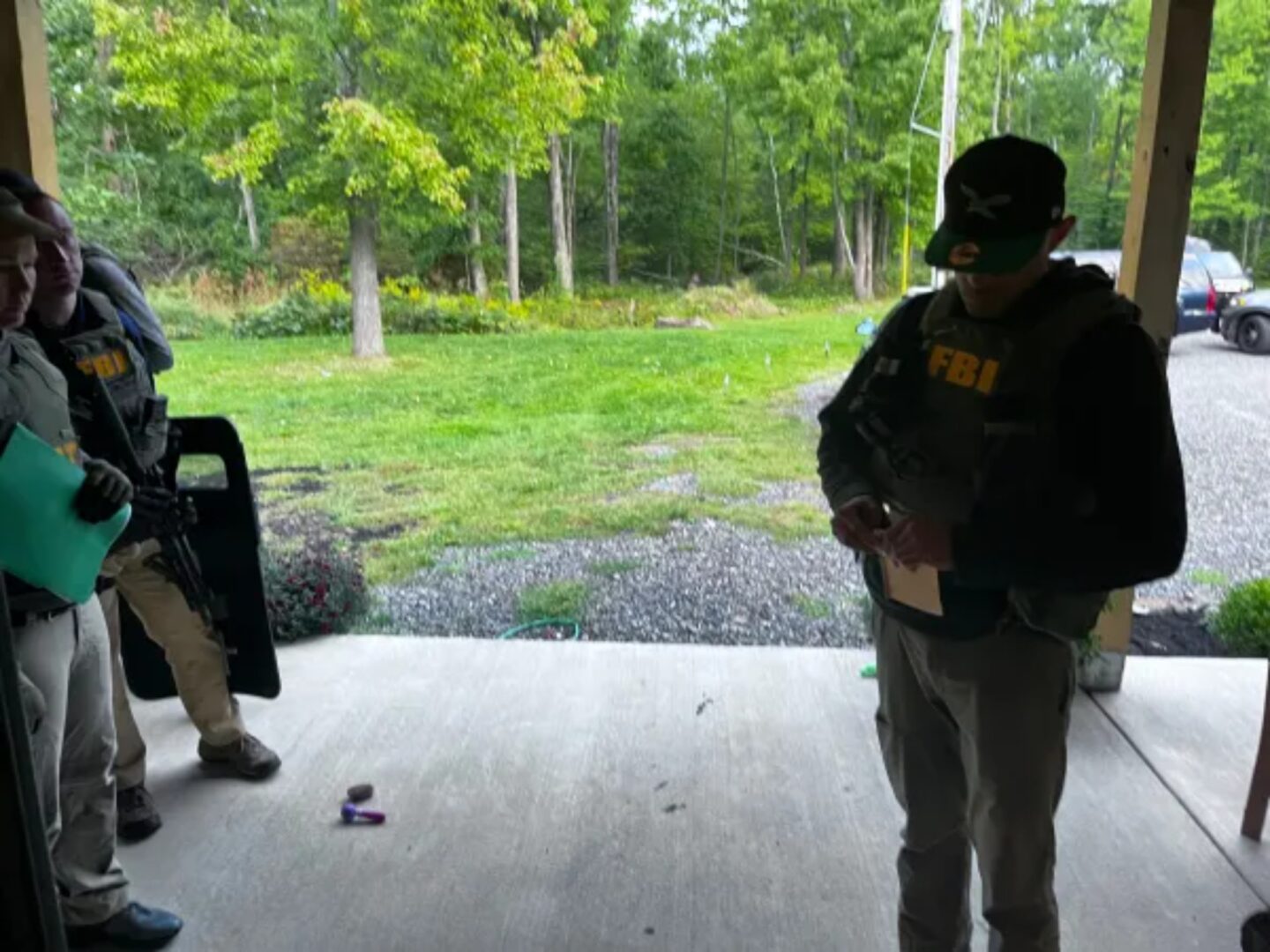 The conspiracy theories that swirled around the violent attack on House Speaker Nancy Pelosi’s husband are a prime example of how misinformation fills an information void.

What happened in that case followed a familiar script used by partisan media outlets and personalities, as well as some Republican lawmakers, nationwide.

In Pennsylvania recently, a similar situation played out following the arrest of a Bucks County anti-abortion activist. Reports driven by unproven details about how the arrest occurred have sparked anger on the political right.

On the surface, the arrest of Mark Houck of Kintnersville doesn’t seem like it would capture national interest.

He is facing two counts of assault after allegedly shoving a 73-year-old Planned Parenthood volunteer outside a reproductive clinic in Philadelphia last year.

The FBI arrested Houck outside his home on Sept. 23.

Here’s what we know: The FBI secured a warrant, sent multiple agents to his home, and arrested him. His wife and children were home at the time.

At least four agents and four vehicles were on the scene, according to a picture released by the Houck family.

The FBI declined to verify details about the situation, citing the ongoing investigation.

We don’t know exactly how many agents were on the scene. We do know the FBI says Houck was arrested outside his home.

Houck’s wife, Ryan-Marie, gave her first interview to the Catholic anti-abortion website LifeSiteNews, claiming more than two dozen agents surrounded the house, and walked through it with their guns drawn.

“Dozens of FBI agents descended upon the Houcks’ home. … His family said he was arrested Friday by more than two-dozen FBI agents who came to the door with guns drawn,” the outlet reported.

The FBI released a statement disputing the reported number of agents on the scene and denying they entered Houck’s home.

The agency called the arrest “professional and in line with standard practices,” noting agents knocked on Houck’s door, identified themselves, and took him into custody without incident.

The FBI declined to further comment, citing the ongoing investigation. In a statement to WITF, it wrote: “It’s unfortunate that inaccurate claims continue to be made regarding last month’s arrest.”

The Houcks’ lawyers say the burden of proof is on the FBI to disprove Ryan-Marie’s claims, and acknowledge that they’re asking people to take her word for what happened.

They sent two more pictures Ryan Marie took of the arrest that show the same scene as the first one – three vehicles, including one state trooper car, and a man in what appears to be an FBI protective vest.

Within days, Houck’s version of the story spread across conservative-leaning media organizations. Ryan-Marie shared her story on Tucker Carson’s show, which averages over three million viewers per night.

“At least 15 big trucks and cars. And there were… 20, 25, 30 men, women, completely in jackets with shields, and helmets, and guns, and they were behind cars,” Houck told him.

Carlson blamed the Department of Justice, saying it is targeting anti-abortion activists.

“A team of nearly 30 FBI agents bristling with automatic weapons raided the home of yet another harmless man with no criminal record. That man’s name was Mark Houck. He’s 47. He’s a leader in his local Catholic community,” Carlson said. “FBI agents pointed rifles at Houck and his wife in front of their seven children.”

Again, without any video and just an FBI statement, here’s a recap of the established facts:

At least four FBI agents drove to Mark Houck’s home in at least four vehicles and arrested him on the morning of Sept. 23.

But, the disinformation churn picked up steam as Republicans, both in Pennsylvania and nationwide, started talking about Houck.

They appealed to anti-abortion voters, or accused the Department of Justice of going after people with conservative views.

He spread unsubstantiated information about the arrest on a conservative radio show posted to his Facebook page.

“This is overkill…  Don’t have weapons drawn on the guy in his house with with all seven kids hanging out there crying and screaming in terror,” he said. “This is designed to send a message and it needs to stop.”

Midstate Congressman Scott Perry mentioned the arrest during the lone debate in the race for his U.S. House seat.

Overall, 33 Republican members of Congress – including Pennsylvania GOP Senator Pat Toomey – signed two separate letters requesting the FBI explain why they supposedly sent dozens of agents, and arrested Houck in his home, despite no proof that it happened.

Both documents included unsubstantiated claims from the Christian News Agency, and one of them cited FOX News.

How – and why – did millions of people believe the narrative from conservative news sites?

Francesca Tripodi is a sociologist at the University of North Carolina.

“What we know, because of the news environment that we live in,” she said. “There is no accountability for when politicians or newscasters lie.”

She researches how prominent conservatives use social media and search engine algorithms to spread propaganda.

When little to no information exists about a concept online, she notes it creates what she calls a “data void,” making it easier to frame a narrative about a little-known subject.

Tripodi says media outlets that support the anti-abortion movement are rallying around Houck, in part, because he was relatively unknown before his arrest.

“So, what something like ‘Mark Houck’ does, it creates a word or a phrase that’s unique to one side of the conversation,” she said. “It allows voters to search for information on that, and it separates out from all the noise around Roe v. Wade, a very unified conversation that will encourage voters to get to the polls.”

Tripodi says this has complicated conversations around fact-based evidence, and made things more difficult for the everyday information seeker.

“We are actually very much living in parallel Internets that are driven through these queries and are being effectively manipulated by propagandists or conspiracy theorists. We see this happening on a lot of different avenues where content is being very specifically created to drive the conversation in a certain way,” she said.

He researches political communication at George Washington University. He also authored a report for the Knight Foundation, which found an “ultra-dense core of heavily followed accounts” played a large role in spreading misinformation ahead of the 2016 election.

The messaging from those accounts, Hindman wrote, became “more ostensibly Republican since.”

“Messages are most effective and most persuasive when they are unopposed,” he said. “And it means that much of the political information that citizens are receiving, especially on the right from co-partisans – though not exclusively on the right – ends up being essentially un-vetted.”

Houck pleaded not guilty in federal court and is out on bond awaiting his trial which starts in January. He says he shoved the man to stop him from verbally harassing one of Houck’s sons.

How can information seekers find facts and not misinformation?

“Someone who works for the Federal Bureau of Investigation has a totally different set of professionalized norms and standards that they’re supposed to be operating under,” she said.

The FBI must meet certain requirements, like keeping meticulous records of all personnel involved with arrests, and wearing body cams when serving warrants. If challenged on the arrest legally, those records will likely be admitted into court.

Francesca Tripodi notes the Houcks have no legal consequences if they were to make false statements to the media, and outlets have none for publishing them. The FBI is legally required to disclose details of the arrest if required by a federal judge.

But she says news consumers have a responsibility too.

“I do think it’s important that people recognize who sources are,” she said. “But more importantly, how the entire event is being framed, and how that framing will shape what you walk away with after you read a story about that subject.”

Researchers from the Global Project Against Hate and Extremism say companies are still playing catch-up two years after the election fraud lies helped cause the Jan. 6 Capitol Attack in 2021.

A Western Pa. group is among those preparing to challenge midterm election results