Toni Shuppe, co-founder of activist group Audit the Vote PA, leads a crowd in prayer at the state Capitol building in Harrisburg on May 11, 2022. The group had gathered to sign a document calling for Pa.'s no-excuse mail-in voting law to be repealed.

A Western Pa. group is among those preparing to challenge midterm election results 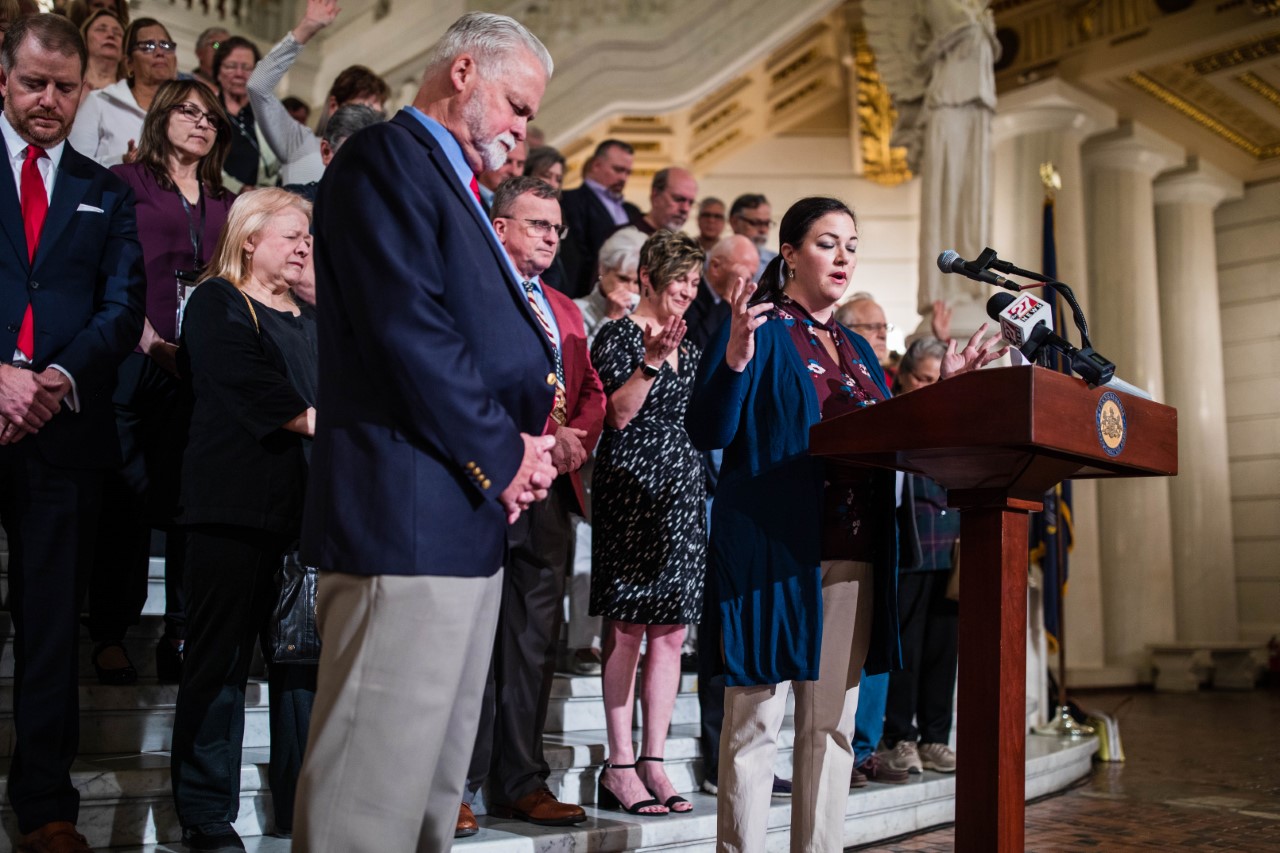 Toni Shuppe, co-founder of activist group Audit the Vote PA, leads a crowd in prayer at the state Capitol building in Harrisburg on May 11, 2022. The group had gathered to sign a document calling for Pa.'s no-excuse mail-in voting law to be repealed.

A recent political rally in Bloomsburg was a lot like any other this election season.

Conservative activists and their followers had gathered to pump themselves up for the coming midterms. A stage adorned with patriotic decorations served as the focal point; six-foot-long banners plastered with words like “We the People,” “Freedom” and “Liberty” were tacked up.

Video taken from the rally shows a woman wearing a white T-shirt and ball cap being introduced and taking the stage. Before she starts her speech, she surveys the crowd:

“Does anybody in this room think that Donald J. Trump was the legitimate winner of the 2020 election in Pennsylvania?” asks Toni Shuppe.

The crowd roared in agreement – even though mandated county and state-administered audits determined Joe Biden won that year’s contest by 80,000 votes. Multiple experts of both parties and even two Trump-appointed federal judges all concluded the election system that produced that result was fair and secure.

Shuppe is a mother of three who co-founded Audit the Vote PA, a group that describes itself on its website as “non-partisan” and “advocating for our right to a free and fair election” in Pennsylvania.

She and her co-founder Karen Taylor also insist “something went awry in 2020,” despite evidence to the contrary. A banner message scrawled across the top of Audit the Vote’s site urges visitors to help them “Expose the Fraud” – though there is no evidence Pennsylvania’s election system allows for widespread ballot fraud or malfeasance. Many of its claims have been refuted by the Department of State.

Neither Shuppe nor Taylor agreed to an interview for this piece.

In the wake of the election two years ago, Audit the Vote was after exactly that – an audit of the vote that it believed would reveal inaccuracies if done to the group’s specifications. Shuppe told the Bloomsburg crowd she was convinced the certified result was so out-of-whack that Biden would never assume office. 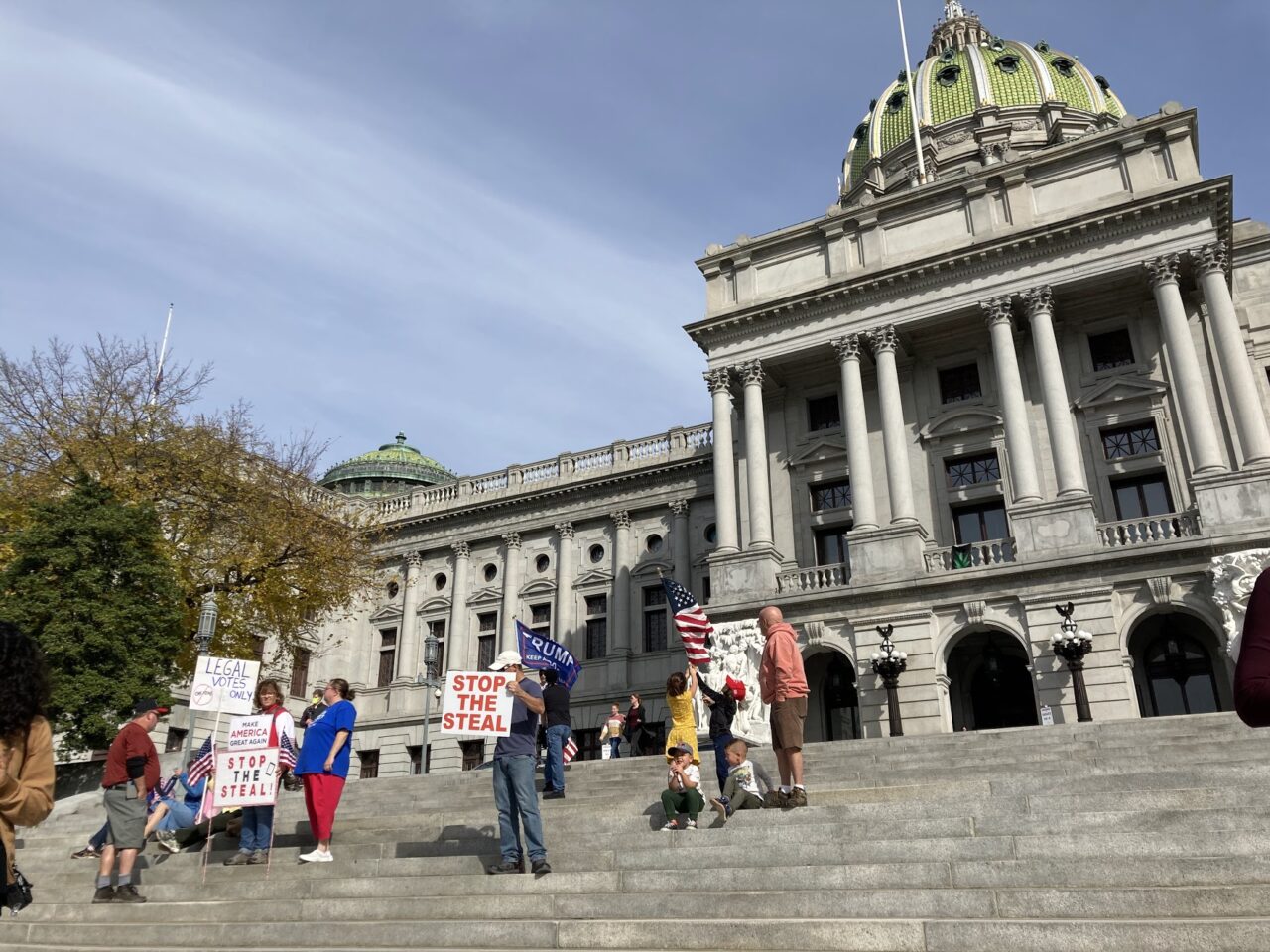 Attendees of a Stop the Steal rally gather at the Pa. Capitol building in Harrisburg on Nov. 5, 2020.

“But when that didn’t happen, I had about a 24- to 48-hour pity party,” she said. “And then, because of a class we had took [sic] Karen and I had learned just enough about our rights to be mildly dangerous.”

Shuppe said she took a constitutional law class that taught her the basics of government. She and Taylor got to work shortly after writing petitions to decertify Pennsylvania’s results. More than a year on, the group is still fielding signatures for the effort.

Audit the Vote shared its messaging on social media and billboards. Shuppe and Taylor spoke at “any Republican committee” that would have them. They even knocked on doors in some counties to ask voters about things like their registration status.

Shuppe tells the Bloomsburg crowd all that work pales in comparison to what Audit the Vote is planning for this month’s election. For this next part, she explains, groups like hers will need their help.

“We are coming for the bad guys,” Shuppe ended, to applause.

It’s unclear who the bad guys are in Shuppe’s story. County election officials, who administer political contests every six months, have repeatedly defended their work against accusations of malfeasance.

Democratic Erie County Clerk Julie Slomski is among them. She was appointed to office earlier this year, but in 2020, she lost an election to incumbent Republican Dan Laughlin for a state Seante seat.

“I don’t believe anything was rigged in 2020 and I use that statement all the time. I wouldn’t have taken this [clerk] job if I believed that,” she said. “I never denied the results in 2020 and I think people need to move on at this point in time.”

Audit the Vote’s county-by-county strategy goes hand-in-hand with the efforts of national conservative figures like Steve Bannon, a Trump White House strategist who is facing a jail sentence for refusing to comply with a subpoena from the January 6 committee.

“We need our people in the counting rooms,” Bannon told viewers of his War Room program last month. You need to be around the green table, right? And you need to be relentless. Polite, nice, fair…but an immovable object.” 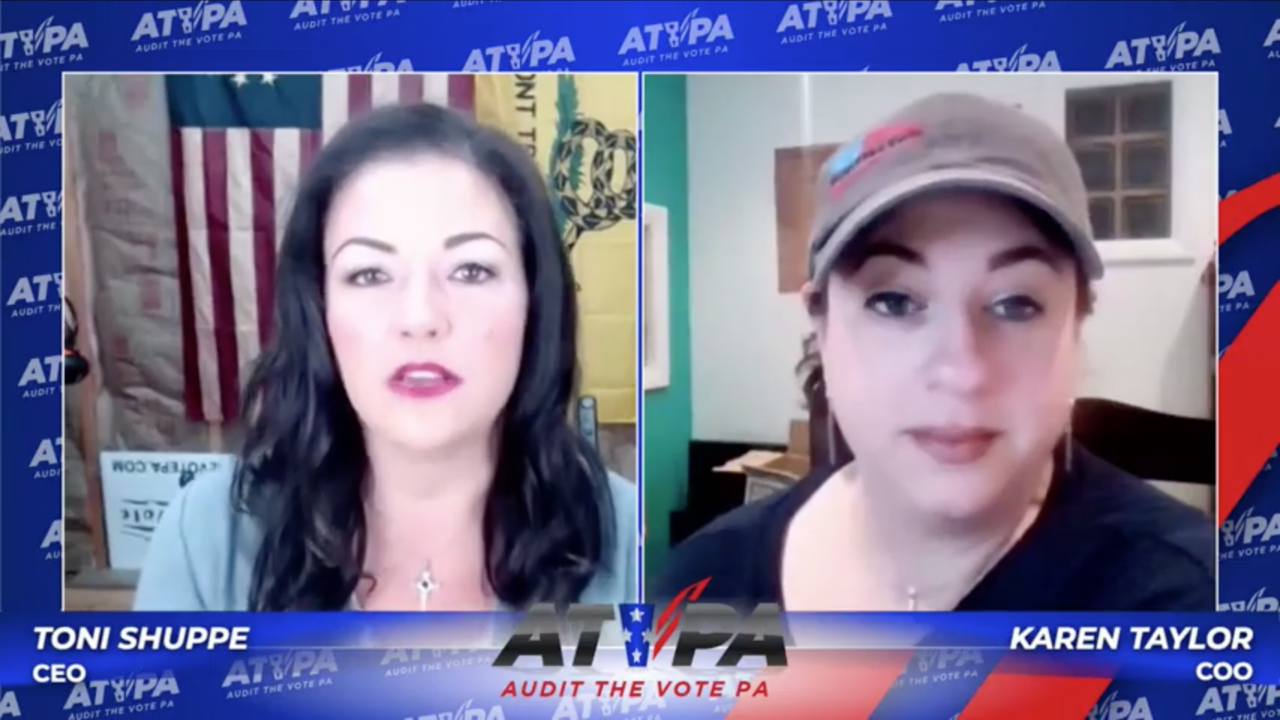 A screenshot from a Facebook livestream held by Audit the Vote PA on Oct. 27, 2022 shows co-founders Toni Shuppe and Karen Taylor.

On a mid-October livestream with supporters, Toni Shuppe claimed Pennsylvania’s conservative activist network has altogether helped train 6,000 poll watchers over the last few months. Those people are appointed by parties and candidates to watch over voting precincts on Election Day.

“If I had to ballpark guess, I would say we’re probably going to get eight, nine, or ten thousand poll watchers [by Election Day],” Shuppe said. “[That] is enough to cover every single polling place in the entire state.”

It’s not clear how accurate her estimate is or how many will actually make it into polling places. Parties, candidates and even counties can act as gatekeepers, many of which offer their own poll worker training.

But there’s another prong to the conservative group’s election strategy: urging counties to tally all votes at least once by hand, something Shuppe said in another livestream is necessary to make sure “the actual paper ballot count matches what’s on the machine.”

Hand recounts are rare in Pennsylvania elections. Experts have told NPR they’re way more time-consuming and error-prone than those done with ballot scanners, which federal election security leaders say are safe and secure.

Lycoming and York counties agreed to hand recounts this month; York’s election board said results from only three of the county’s 161 precincts will be scrutinized in that way. Other counties – from Susquehanna to Crawford to Philadelphia – received hand recount requests, but declined.

Audit the Vote is undeterred by the refusals: it wants to raise $100,000 for lawsuits aimed at forcing such recounts over the next two months. 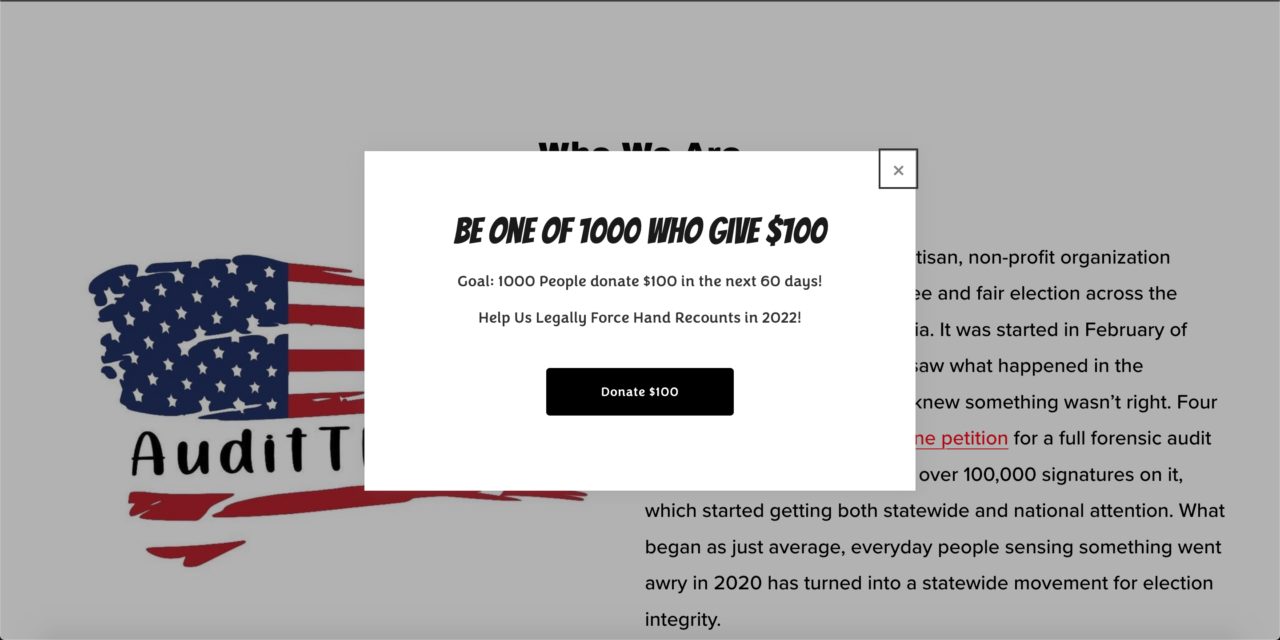 via Audit the Vote PA

A screenshot from Audit the Vote PA’s website, taken Nov. 4, 2022, shows a banner message to visitors asking for a $100 donation toward a election lawsuit.

“We’ve set the standard for transparency for the entire state,” Savidge said. Northumberland observers watch mail-in ballot canvassing through a large glass window at county election headquarters. If something goes awry at any point in the process, Savidge said all counting stops while election workers spell out what’s going on for the audience.

“There’s only so much you can do before people just are unreasonable, and a lot of these questions are just getting unreasonable,” he said.

Savidge says there’s been an influx of new Republican party poll watchers in his county, who want to help out GOP candidate for governor Doug Mastriano. But he said each has had to take the county’s training and agree to abide by it.

Nonetheless, Audit the Vote and other groups have made clear that being seen and heard is part of their strategy.

They’ve been building off the 2020 playbook for casting doubt on election results – and after two years worth of work, the group is ready to challenge midterm results they don’t like.

What to expect in Pennsylvania on election night