"They concocted a plan for an armed rebellion to shatter a bedrock of American democracy." 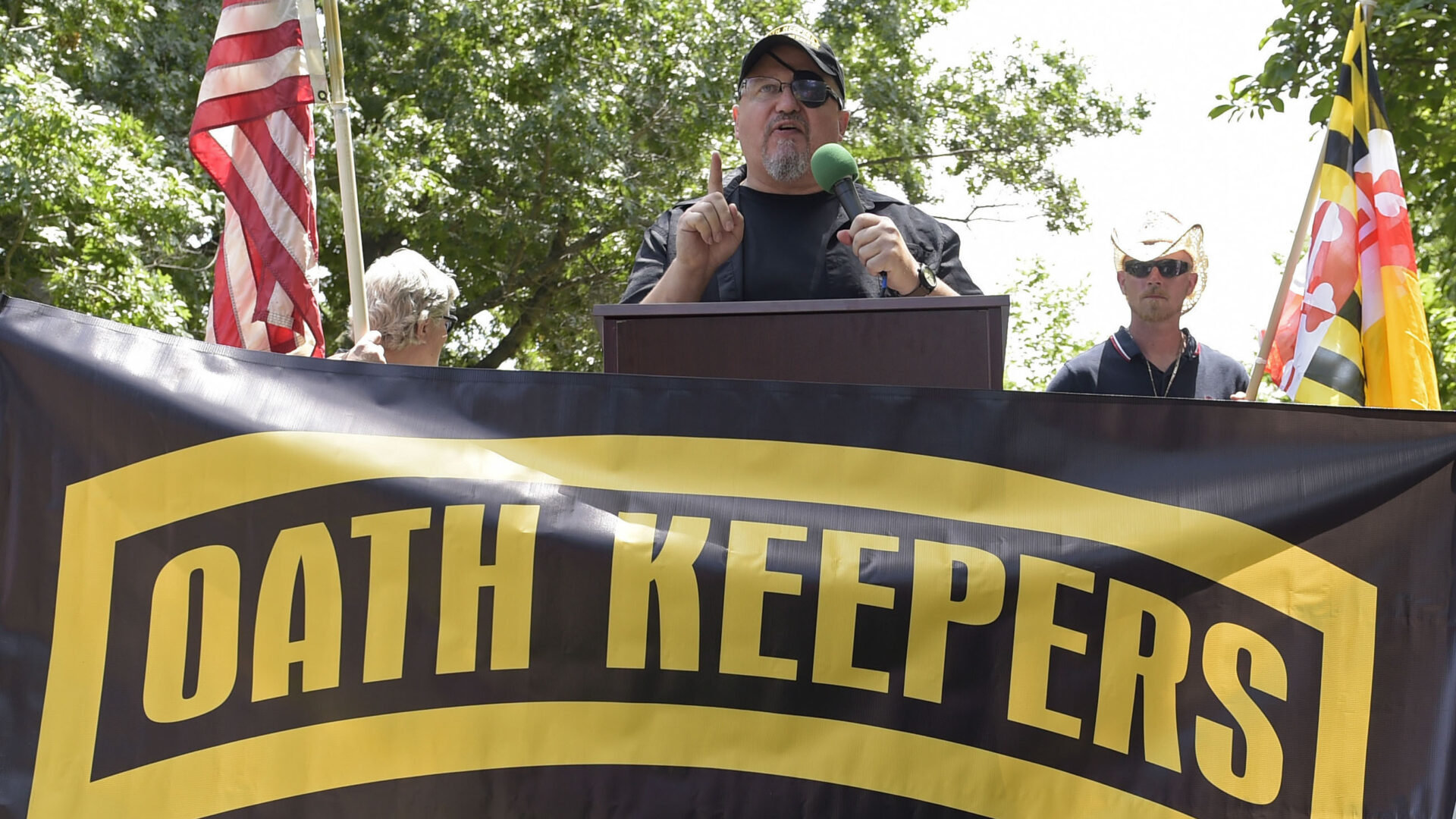 Oath Keepers founder Stewart Rhodes and four other members of the far-right group tried to change history and disrupt the peaceful transfer of power on Jan. 6, 2021, prosecutor Jeffrey Nestler told jurors hearing the first seditious conspiracy trial to result from the assault on the U.S. Capitol last year.

“They concocted a plan for an armed rebellion to shatter a bedrock of American democracy,” Nestler said.

Using text messages, video and recorded calls, the Justice Department is trying to persuade the jury at a federal courthouse in Washington, D.C., that the defendants set out to overturn the results of the 2020 election by storming the Capitol and interrupting the count of electoral votes.

Prosecutors said Rhodes, a graduate of the Yale Law School and known for his distinctive cowboy hat and eye patch, chose his words carefully, speaking in code and in shorthand in the weeks before the assault on the Capitol.

Rhodes never entered the building on Jan. 6, 2021, but he was photographed on the Capitol grounds “surveying” his troops like a battlefield general, the government said. A couple of minutes before 14 people wearing military-style gear marched toward the building’s doors and pushed past the police, Rhodes spoke with his fellow defendant Kelly Meggs, Nestler said in remarks that lasted more than an hour.

Lawyers for Rhodes asked the jury to keep an open mind and hold the government to its burden of proof. Attorney Phillip Linder said the Oath Keepers had traveled to Washington to provide security for events in early January 2021.

“Stewart Rhodes meant no harm to the Capitol that day,” Linder said. 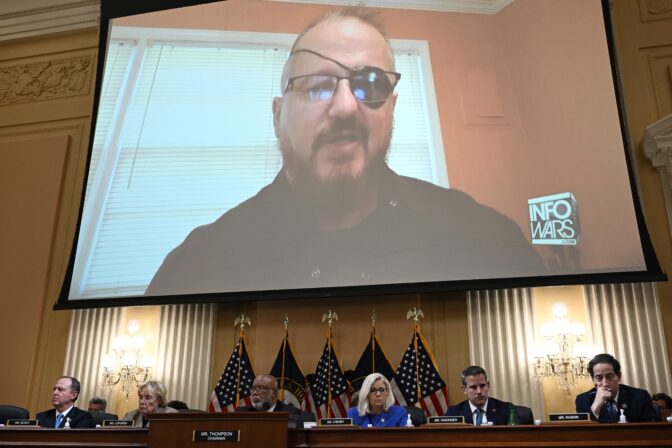 Describing his client as a “constitutional expert,” Linder said Rhodes is “extremely patriotic” and “he loves this country.”

As for the volume of texts and video, Linder said the prosecutors are introducing that evidence to alarm and anger the jury.

“My client did nothing illegal that day, even though it may look inflammatory,” Linder said, describing Rhodes’ hot-tempered statements before and after Jan. 6 as “nothing more than free speech and bravado.”

Prosecutors had presented messages in which Rhodes wrote before Jan. 6: “We aren’t getting through this without a civil war.” And after Jan. 6, Rhodes allegedly said, “my only regret is that they should have brought rifles….we could have fixed it right then and there.”

Linder also pledged in his 22-minute opening statement that Rhodes would take the witness stand in his own defense before this trial ends.

The case is closely watched as a rare use of the seditious conspiracy statute, which carries a maximum of 20 years in prison

After defense lawyer Linder mentioned to the jury that most of the defendants are incarcerated and face hefty prison terms, the judge cautioned him to avoid those topics.

The indictment describes conduct weeks before the Capitol siege, when Rhodes and others allegedly stockpiled weapons and equipment for a quick reaction force at a Comfort Inn hotel in Northern Virginia, across the Potomac River from D.C. And it continues through the sometimes violent events of that day.

After the assault, the defendants felt “elated,” Assistant U.S. Attorney Nestler said, citing messages they shared boasting about their actions. Rhodes allegedly wrote, “you ain’t seen nothing yet.” Meggs, who ran the Florida chapter of the Oath Keepers, allegedly wrote, “we aren’t quitting!! We are reloading!!”

Defendant Jessica Watkins wrote, “we were in the thick of it and stormed the Capitol … forced our way into the senate and the house.” Defendant Thomas Caldwell wrote “I rolled with the Oath Keepers….. I said, let’s storm the place and hang the traitors.”

Within a couple of days, the mood had turned, and Rhodes allegedly directed people to “delete your self incriminating comments or those that incriminate others.”

In pretrial filings and arguments, defense lawyers had argued Rhodes and the other Oath Keepers had been preparing to assist in the event that former President Trump invoked the Insurrection Act, which gives the president wide authority to call for support in the event of an emergency. Trump never took that action. But Rhodes is expected to make it a key part of his defense. Prosecutors say that’s just a cover story. 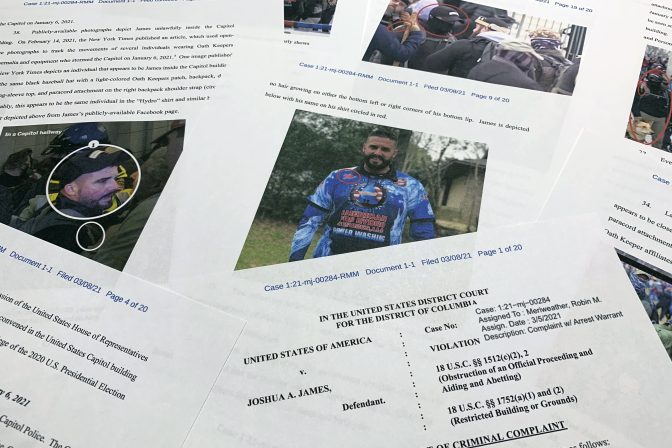 The affidavit in support of the criminal complaint against Joshua James is photographed Wednesday, March 2, 2022. The Alabama man affiliated with the far-right Oath Keepers militia group has pleaded guilty to seditious conspiracy for his actions leading up to and through the Jan. 6 riot.

Defense lawyer David Fischer, who represents defendant Thomas Caldwell, used his opening statement to blast the FBI for conducting what he considered a questionable investigation and misunderstanding military terms used by Caldwell, a disabled U.S. Navy veteran. In another instance, Fischer said, the FBI used statements to support its search of Caldwell’s farm that actually came from the cult classic movie, The Princess Bride.

Fischer also said the quick reaction force was a “break the glass in case of emergency” option the Oath Keepers had used at previous rallies in Ferguson, Mo., and in D.C., when Congress was not in session.

“This is the biggest bait and switch in the history of the American justice system here,” Fischer said.

A lawyer for Watkins told jurors she is a transgender woman and “she’s never felt like she’s fit in.” Attorney Jonathan Crisp said that dynamic explained some of what Watkins did on Jan. 6 and in other interactions with the Oath Keepers.

Watkins is a “protest junkie” and a former EMT who was there “to help people,” Crisp said. Watkins turned herself in voluntarily and spoke with the FBI four times, not what someone trying to overthrow the government would do, Crisp said.

Earlier Monday morning, Judge Amit Mehta denied a request by the defense to move the trial out of D.C., saying the three-day voir dire process had produced a 16-member jury with no bias against the defendants.

The trial is expected to last between four and six weeks.