Stephen Ayres, who pleaded guilty last in June 2022 to disorderly and disruptive conduct in a restricted building, testifies as the House select committee investigating the Jan. 6 attack on the U.S. Capitol holds a hearing at the Capitol in Washington, July 12, 2022.

“I just hope one day I can wake up and not have to live with it every day.” 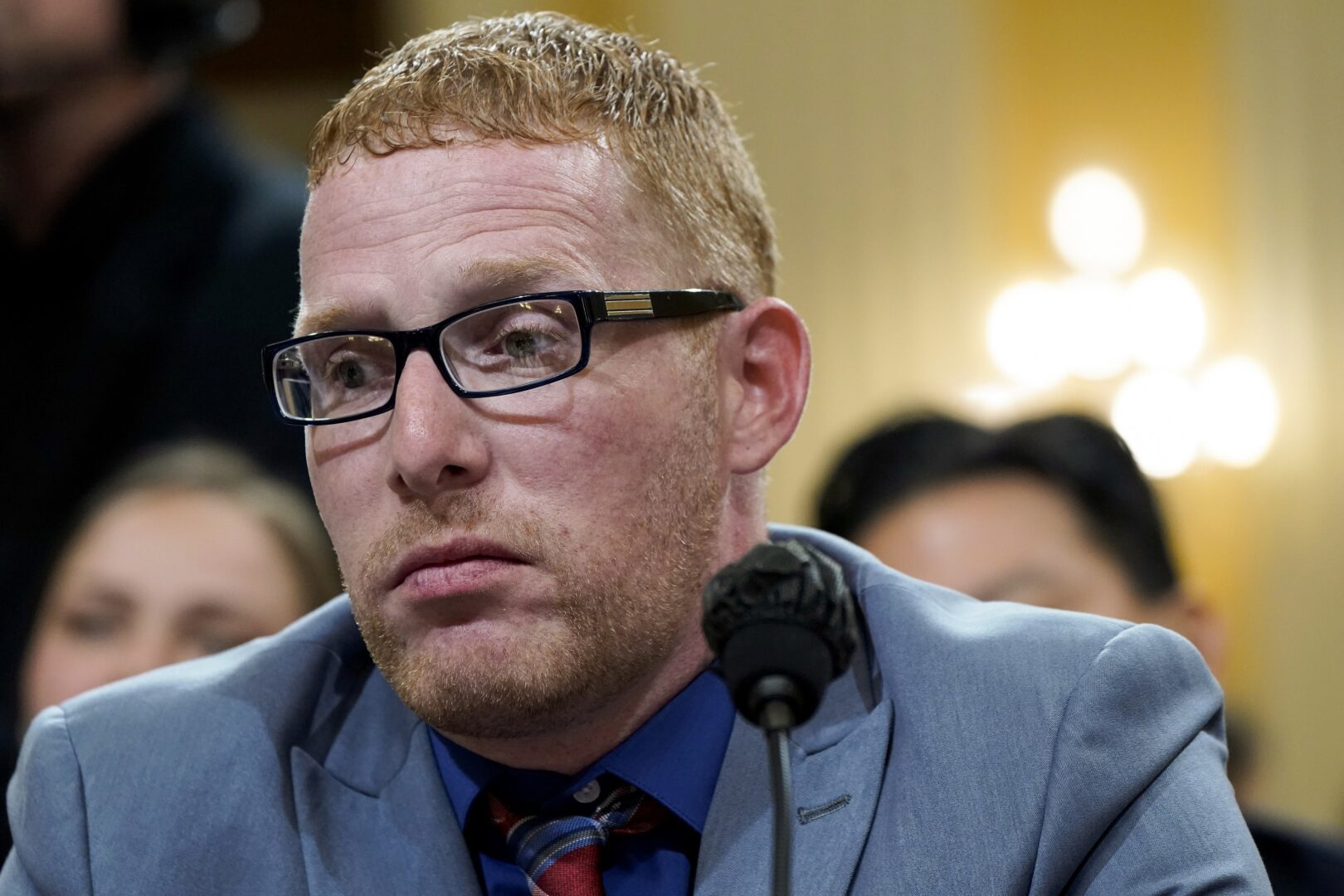 Stephen Ayres, who pleaded guilty last in June 2022 to disorderly and disruptive conduct in a restricted building, testifies as the House select committee investigating the Jan. 6 attack on the U.S. Capitol holds a hearing at the Capitol in Washington, July 12, 2022.

An Ohio man who testified at a congressional hearing about why he stormed the U.S. Capitol avoided imprisonment when a federal judge sentenced him on Thursday to two years of probation for his role in the mob’s attack.

After his televised testimony at a U.S. House committee’s hearing in July, Stephen Ayres approached and apologized to a group of police officers who had struggled to repel the crowd of rioters on Jan. 6, 2021.

Ayres apologized again on Thursday — this time to the court and the “American people” — before U.S. District Judge John Bates sentenced him to probation and ordered him to perform 100 hours of community service.

Bates said he believes Ayres has shown genuine remorse and regret for his conduct, including with testimony for the House committee investigating the insurrection.

“It was a travesty in American history, a shocking attack on our democratic values and institutions,” the judge said. “All who participated in that insurrection, I think it can be called, must be held responsible.”

Ayres said he has lost friends, family and a job after he joined the Jan. 6 attack.

“I pray every day for the officers that are struggling with this, the families that lost their loved ones,” Ayres said. “I just hope one day I can wake up and not have to live with it every day.” 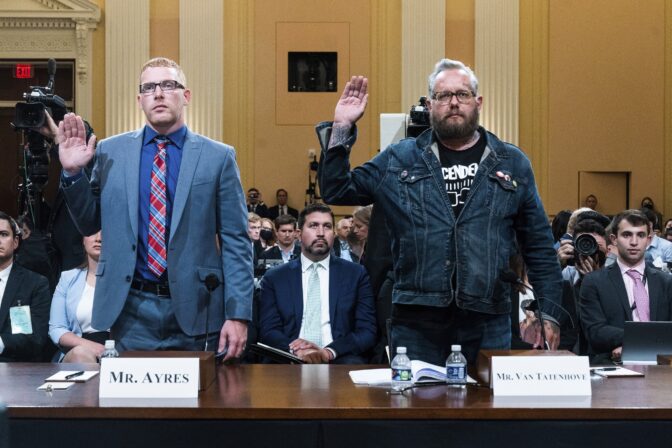 Stephen Ayres, who pleaded guilty last in June 2022 to disorderly and disruptive conduct in a restricted building, left, and Jason Van Tatenhove, an ally of Oath Keepers leader Stewart Rhodes, are sworn in to testify as the House select committee investigating the Jan. 6 attack on the U.S. Capitol holds a hearing at the Capitol in Washington, Tuesday, July 12, 2022.

Prosecutors recommended sentencing Ayres to 60 days of incarceration, one year of supervised release and 60 hours of community service. Ayres’ lawyer, Eugene Ohm, sought a sentence of probation without any jail time.

Ayres, 41, pleaded guilty in June to one count of disorderly or disruptive conduct in a restricted building or grounds, a misdemeanor punishable by a maximum of one year in prison. He wasn’t accused of engaging in any violence or property damage.

Ayres was charged with Matthew Perna, a friend from Pennsylvania who joined him in Washington. They attended the Jan. 6 “Stop the Steal” rally, where then-President Donald Trump addressed a crowd of supporters. Then they joined the mob’s assault on the Capitol, entering the building through the Senate Wing doors.

Perna died in February. He had pleaded guilty to riot-relayed charges in December and was scheduled to be sentenced in March. A filing notifying the court of Perna’s death doesn’t specify a cause, but Ayres’ attorney said Perna “took his own life largely because of the pressures of this case.”

“Mr. Ayres thinks of Mr. Perna, who conveyed to him that he felt responsible that Mr. Ayres had been charged, every day. Mr. Ayres wonders whether and to what extent Mr. Ayres’ circumstances contributed to Mr. Perna’s depression,” Ohm wrote.

Ayres was employed as a supervisor for a cabinet manufacturer when he was arrested at his home in Warren, Ohio, less than three weeks after the Capitol attack. His employer fired him.

During a July 12 hearing before the House committee investigating the Jan. 6 insurrection, Ayres testified that he felt as if Trump had called him to Washington that day. He said he believed that Trump would join them at the Capitol and held out hope that the 2020 presidential election results could be overturned in favor of the Republican incumbent.

“I felt like I had like horse blinders on. I was locked in the whole time,” Ayres said. 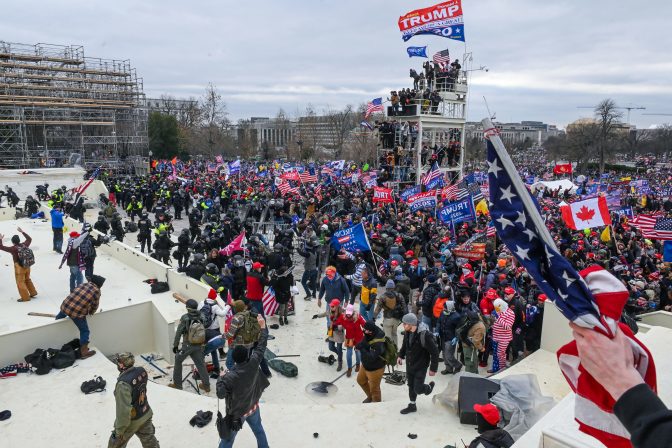 Trump supporters clash with police and security forces as they invade the Inauguration platform of the US Capitol in Washington, DC on January 6, 2021. – Demonstrators breeched security and entered the Capitol as Congress debated the a 2020 presidential election Electoral Vote Certification.

Ayres told committee members that he and others decided to leave the Capitol right after Trump tweeted at 4:17 p.m. for his supporters to go home.

In a court filing accompanying his guilty plea, Ayres agreed he stayed in the Capitol for roughly 10 minutes. But his testimony about Trump’s tweet indicates he actually remained in the building for approximately 90 minutes, according to prosecutors.

After his testimony, Ayres apologized to former Capitol Police Officer Aquilino Gonell, Metropolitan Police Officer Daniel Hodges and former MPD officer Michael Fanone, who were in the audience. Fanone told The Associated Press that the apology was not necessary because “it doesn’t do s— for me.”

At a separate hearing on Thursday, U.S. District Judge Trevor McFadden sentenced a former U.S. Army reservist to four years in prison for storming the Capitol, according to a Justice Department news release. Prosecutors had recommended a prison sentence of six years and six months for Timothy Hale-Cusanelli, whom they described as a Nazi sympathizer.

Hale-Cusanelli, 32, of Colts Neck, New Jersey, was employed as an armed security officer for Naval Weapons Station Earle in New Jersey when he joined the Jan. 6 attack. In May, a jury convicted him of obstructing Congress from certifying Biden’s 2020 election victory. Prosecutors said Hale-Cusanelli lied when he testified at his trial that he didn’t know Congress sat in the Capitol or that its joint session for certifying the Electoral College vote was taking place there on Jan. 6.

At least 880 people have been charged with Capitol riot-related federal crimes. Approximately 400 of them have pleaded guilty and more than 250 have been sentenced.

An appeals court rules the Justice Dept. can use Mar-a-Lago records in criminal probe