FILE - Florida Gov. Ron DeSantis speaks at Miami's Freedom Tower, on Monday, May 9, 2022. A Florida law intended to punish social media platforms like Facebook and Twitter is an unconstitutional violation of the First Amendment, a federal appeals court ruled Monday, May 23, 2022, dealing a major victory to companies who had been accused by DeSantis of discriminating against conservative thought. (AP Photo/Marta Lavandier, File) 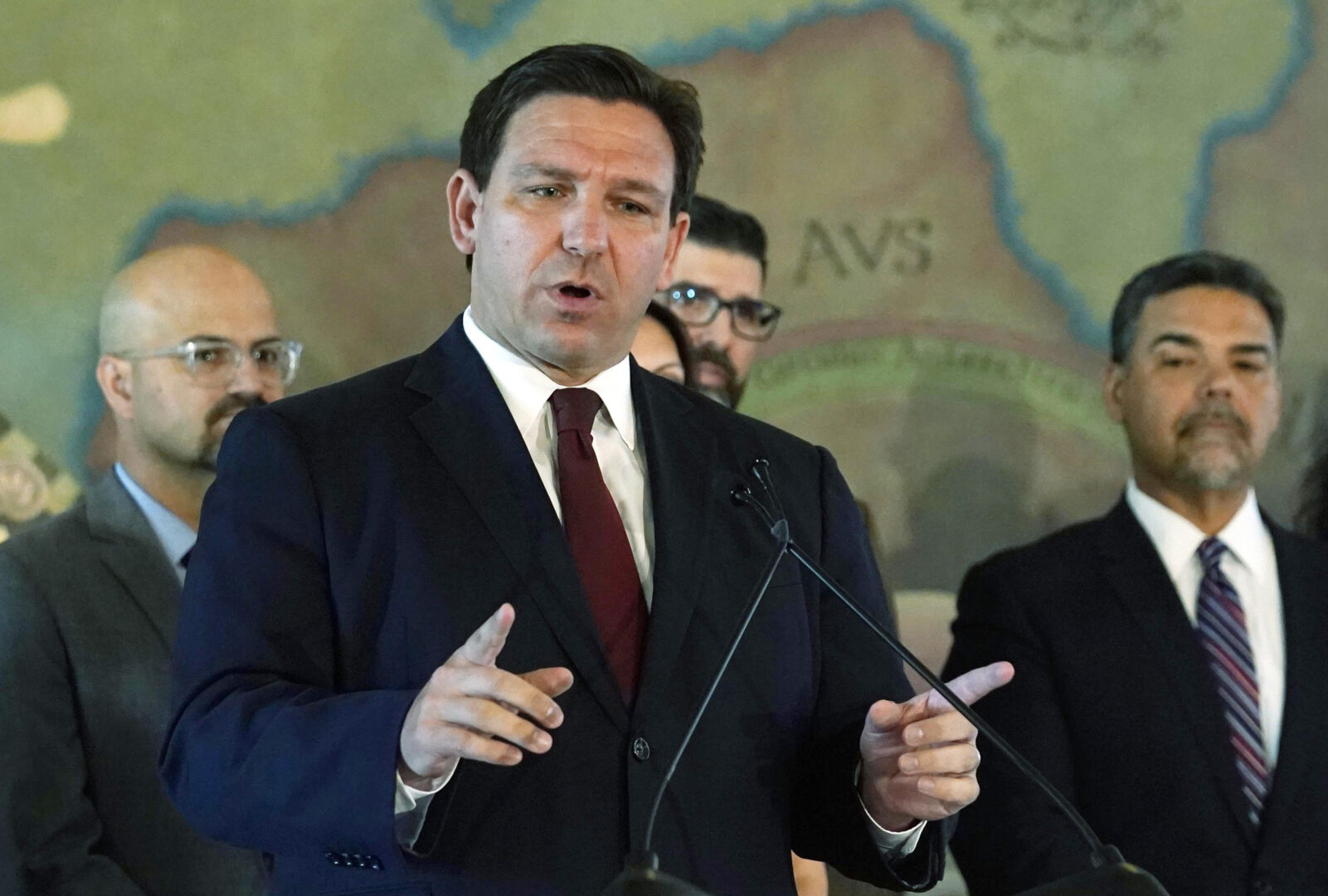 FILE - Florida Gov. Ron DeSantis speaks at Miami's Freedom Tower, on Monday, May 9, 2022. A Florida law intended to punish social media platforms like Facebook and Twitter is an unconstitutional violation of the First Amendment, a federal appeals court ruled Monday, May 23, 2022, dealing a major victory to companies who had been accused by DeSantis of discriminating against conservative thought. (AP Photo/Marta Lavandier, File)

Ordinarily, political reporters wouldn’t think twice about whether to cover next Friday’s planned visit to Pittsburgh by Florida Gov. Ron DeSantis. He is, after all, a potential Republican presidential contender for 2024, and he will be at a Downtown hotel stumping on behalf of Pennsylvania gubernatorial candidate Doug Mastriano — a candidate who rarely speaks to reporters at all.

But a media policy being imposed by the event’s sponsor, conservative activist group Turning Point Action, may present ethical challenges for those who wish to cover it.

The requirements are included in a form reporters must complete to obtain credentials for the event. Many rules are unsurprising, such as a requirement to “adhere to the rules and regulations of the venue.”

Others are more problematic, such as a provision that grants to Turning Point and its vendors “the right to have access to footage for archival and promotional purposes, upon request, and to know in what manner the footage will be utilized.” The policy also bars audio or visual recording of anything shown on screens during the event, or filming anyone at the event — including speakers — who doesn’t wish to be filmed.

Turning Point asserts that reporters who seek to speak with attendees — “some of whom are underage” — must get the group’s approval first. And reporters “shall adhere to all direction, instructions, and requests” from a Turning Point representative who “shall have the final say on all matters.”

Abiding by those conditions could pose a challenge to journalistic ethics. For example, NPR’s Ethics Handbook, which guides WESA journalists in their work, stipulates that reporters must maintain their independence. Among its principles is “Don’t allow sources to dictate our coverage. We don’t allow sources to dictate how a topic will be covered, or which other voices or ideas will be included in the stories we do.”

Maggie Patterson, a Duquesne University professor who teaches media ethics, called the policy provisions “shocking. It’s not what you expect to see in a developed democracy. The provision that jumped out at me was that your material could be taken by the sponsoring organization to be used for their own promotional purposes. I don’t think ethically they have any right to your material.”

Patterson said that if her students were presented with such an ethical quandary, she would advise them: “Your first loyalty is to citizens, and your commitment is to the truth. So if that is being compromised — and I would say it is being compromised in this case by these demands — I think that that your answer is you don’t attend.”

It is not clear how local or other media outlets will respond to the policy, which is also being applied to DeSantis speeches in Ohio and Arizona next week. Out-of-state outlets contacted by WESA declined to comment publicly, though one said it was reviewing the ethics of the ground rules.

Turning Point did not respond to calls or questions submitted online by WESA. But the press credential request form says the policies “have been put in place to ensure that our media partners (you!) are able to obtain great content, while protecting the experience of our attendees.”

As a private entity, the group is allowed to set whatever ground rules it wants. And by inviting the media to attend at all, the event is arguably more welcoming to reporters than Mastriano himself has been. 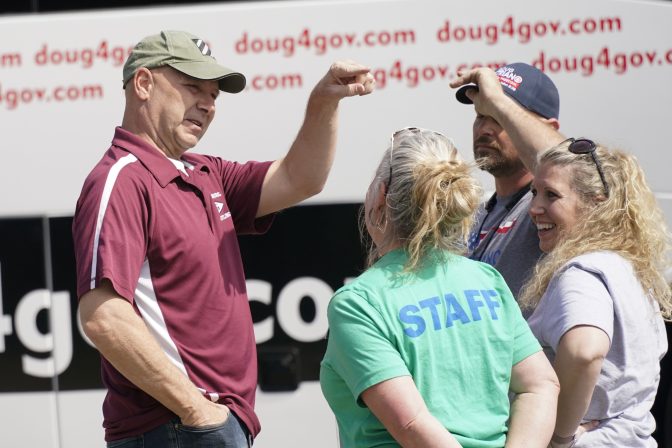 His campaign has been holding a series of events this week in southwestern Pennsylvania, but news outlets (including WESA) have sought press credentials in vain, and reporters who have shown up anyway have been kept at arm’s length from the candidate. Mastriano typically does not respond to requests for comment from reporters and has given interviews only to conservative media.

DeSantis, too, has had a rocky relationship with the press. Last year, for example, he barred outlets other than Fox from covering a bill-signing. And more generally, distrust of mainstream media has become increasingly common among conservative politicians. Earlier this month, NPR reported that nationwide, “many Republican candidates are showing that they don’t want — or need — to get their messages out via legacy media outlets.”

In fact, at least within conservative circles, there may be more upside in cultivating the media’s disdain than its approval. And an increasingly robust conservative media ecosystem means that if traditional journalism outlets “don’t go to this event, [conservative audiences] will find somewhere else to hear what happened,” said Joy Mayer, the founder of Trusting News.

The organization, a project of two leading journalism advocacy groups, seeks to build trust between the press and the public.  But in a “hyperpartisan political environment,” Mayer said, conservatives “have been told over time not to trust the news.” While much of that cynicism is focused on national news, local reporters also face rising distrust as even local journalism “is getting nationalized and politicized.”

Still, Mayer said journalists themselves bear at least some responsibility for the breakdown. Conservative audiences, she said, “feel like the news is not made for or by people like them, and they’re not wrong.” Reporters often have more in common with each other than with swaths of the communities they serve, she said. And newsrooms typically don’t do a good job of explaining how they make coverage decisions.

Turning Point’s policy, she said, is a case in point of how an internal debate about ground rules will translate into a decision about how or whether to cover an event — a decision that may prompt yet more accusations of bias.

“This is a prime example of the urgency around journalists figuring out how to explain what they do because all of the decisions that we make in private are invisible unless we shine a light on them,” she said.

Helen Fallon, the president of the Press Club of Western Pennsylvania, said the Turning Point rules “create a real dilemma for reporters.

“You definitely want to cover the event, and for a print [journalist], most of this you can avoid,” said Fallon, who is also a professor emeritus and former chair of the Department of Journalism and Mass Communication at Point Park University. “But what about broadcast?”

Fallon said she had never seen such rules before. She said she was circulating the policy among Press Club leaders to see whether they are concerned, and whether the organization should craft a response.

But given the current environment, she said, in the future “I think editors and producers are going to have some tough choices.”