This 1997 image provided by the CDC during an investigation into an outbreak of monkeypox, which took place in the Democratic Republic of the Congo (DRC), formerly Zaire, and depicts the dorsal surfaces of the hands of a monkeypox case patient, who was displaying the appearance of the characteristic rash during its recuperative stage.

Monkeypox explained: How to protect yourself and what to watch out for

Monkeypox is most similar to smallpox, which was eradicated through global vaccination efforts in 1980. 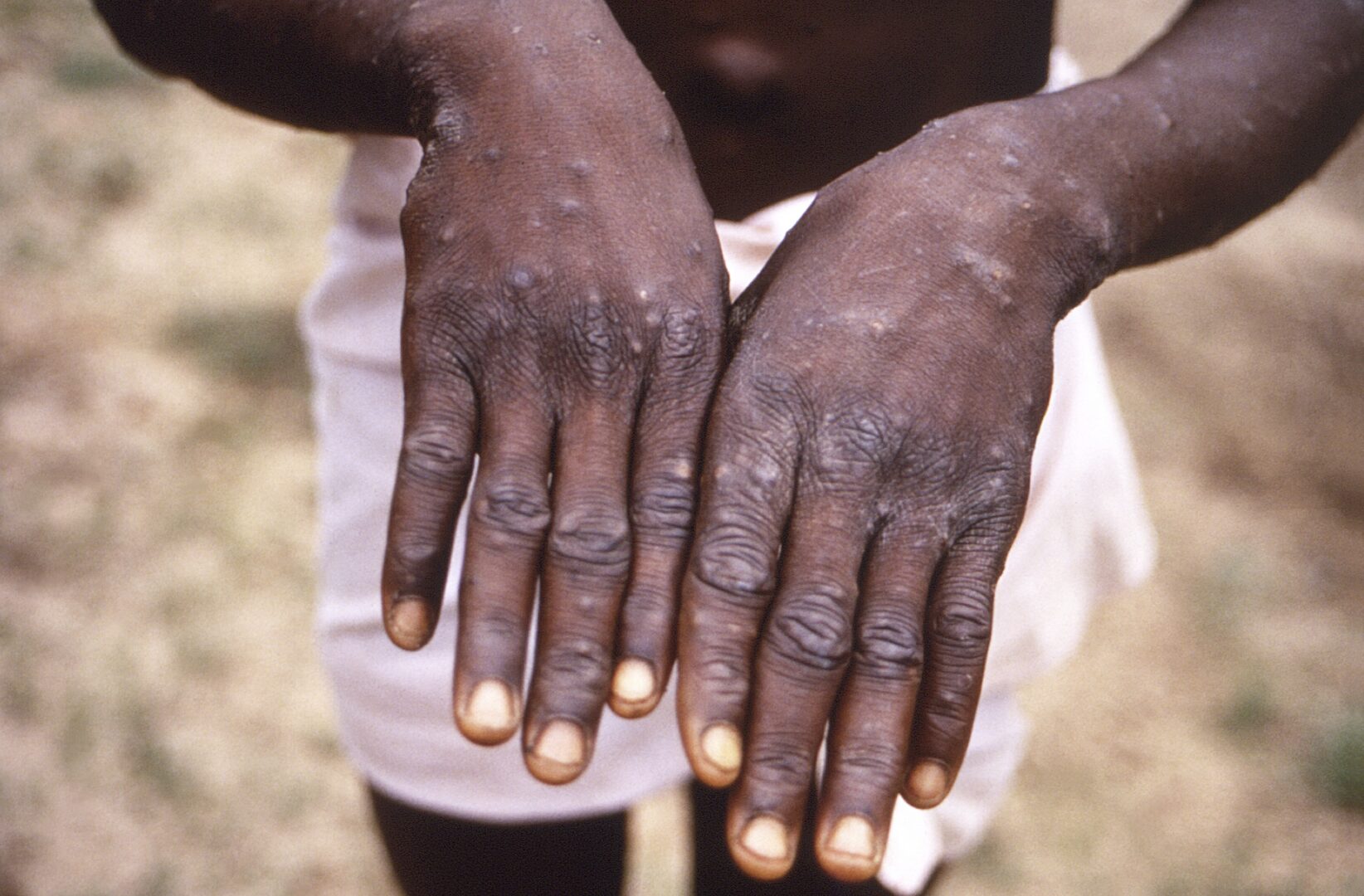 This 1997 image provided by the CDC during an investigation into an outbreak of monkeypox, which took place in the Democratic Republic of the Congo (DRC), formerly Zaire, and depicts the dorsal surfaces of the hands of a monkeypox case patient, who was displaying the appearance of the characteristic rash during its recuperative stage.

The World Health Organization has declared the monkeypox outbreak a public health emergency of international concern, but it’s not a disease that the general public has been familiar with.

For well over a decade, members of the scientific community have been concerned about the potential of a monkeypox epidemic.

With nearly 16,000 reported cases worldwide and counting, here’s what you need to know about monkeypox, how to protect yourself and what to do if you think you have it. 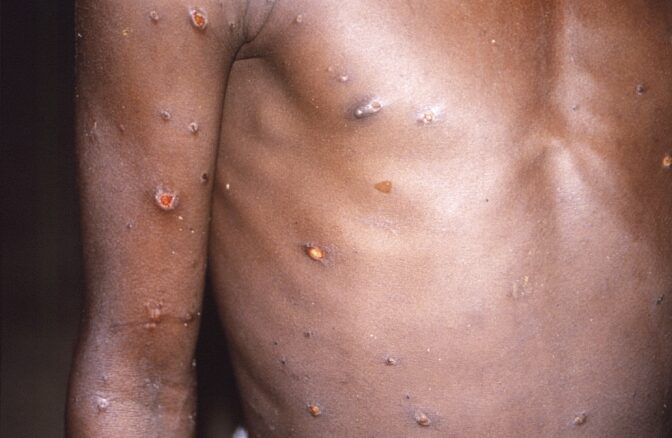 This 1997 image provided by U.S. Centers for Disease Control and Prevention shows the right arm and torso of a patient, whose skin displayed a number of lesions due to what had been an active case of monkeypox.

What exactly is monkeypox?

Besides the reference to wildlife, the only similarity between monkeypox and chickenpox is that they’re a virus. Instead, monkeypox is most similar to smallpox, which was eradicated through global vaccination efforts in 1980.

The two viruses are from the orthopoxvirus family. Monkeypox is not as transmissible or fatal as smallpox. However, some researchers worry that monkeypox could mutate and become a greater threat to humans.

One study published in 2008 warned that if monkeypox were to be introduced to an unvaccinated population, the virus could capitalize on the situation and become an epidemic.

“Although smallpox has been eradicated from the human population since 1980, there is the potential for monkeypox to fill this void,” the study says. “An extended chain of person-to-person transmissions of monkeypox in 2003 in the Republic of Congo reveals the potential of further adaptation of the virus to become a more successful human pathogen.”

Before the 2022 outbreak, nearly all monkeypox cases found outside of Africa – where some rodents and non-human primates potentially carry the virus – were tied to international travel and imported animals.

The reason it’s called monkeypox is because it was first discovered in colonies of monkeys used for research in 1958. But that doesn’t mean it originated with the animals as the source of the disease remains unknown, according to the Centers for Disease Control and Prevention.

Within the U.S., the only outbreak was in 2003, when 47 confirmed and probable cases were discovered in six states. That outbreak was tied to pet prairie dogs that came into contact with infected rodents housed nearby, including several species of squirrels, mice and rats, the CDC said at the time. 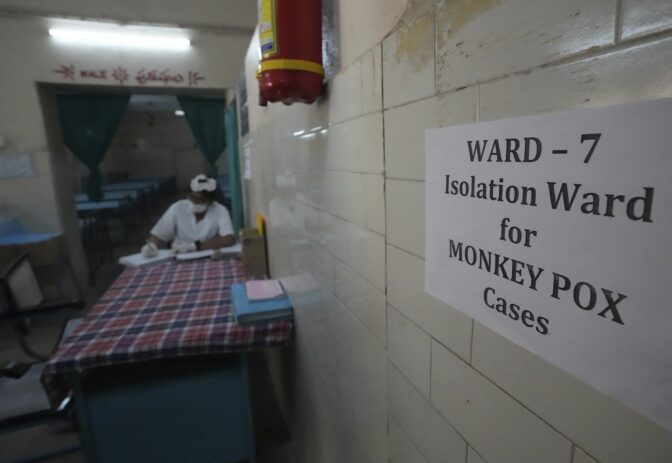 What are the symptoms?

Signs and symptoms of monkeypox are similar to those of smallpox:

A rash can also be present, resembling pimples and pus-filled blisters, the CDC says. It can develop all over the human body, including face, feet, hands, genitals and inside the mouth.

It’s important to note that doctors are seeing a subtler rash in some patients. Some individuals developed only a single lesion that could be mistaken for a symptom of sexually transmitted diseases such as herpes or syphilis, NPR has reported.

“I think that’s actually supercritical,” infectious disease doctor Donald Vinh at McGill University told NPR last month. “Because you can see how these patients can be missed. But they are still contagious and may propagate the disease.”

The CDC says the rash typically lasts two to four weeks and that some individuals develop it before the onset of other symptoms, while others may experience only the rash.

How deadly is monkeypox?

The good news is the version of monkeypox spreading across the globe — the West African type — isn’t particularly deadly. According to the CDC, more than 99% of patients can expect to survive.

However, an infection could prove fatal in children under the age of 8, individuals with compromised immune systems and those who are pregnant or breastfeeding.

The most common outcome following an infection is scarring from the rash. But more serious complications can arise, according to research of monkeypox in humans published in 2009, including pulmonary distress and bronchopneumonia. The virus can also lead to eye infections and corneal scarring, which in serious cases can result in permanent vision loss.

How does the virus spread?

The CDC says the risk of contracting monkeypox in the U.S. is “believed to be low,” but anyone who comes into close contact with an individual carrying the disease is at risk of infection.

The current outbreak is spreading from human-to-human contact. You could develop an infection from droplet respiratory particles by spending too much time face-to-face with a monkeypox carrier, the WHO warns.

The virus also spreads through physical contact, including touching a lesion, as well as the exchange of some bodily fluids like saliva. An individual could become infected by touching items and surfaces shared with someone exhibiting symptoms.

How do I protect myself?

As the virus can spread through skin-to-skin contact, the CDC advises people to exercise caution in situations where one can’t maintain some sense of personal space and bumping into others is impractical. In places where clothing is minimal and you could experience that contact, such as crowded raves and clubs, the risk goes up.

Potentially contaminated items like bedding, clothes and towels should be contained until you have time to do your laundry, the CDC recommends. Be sure to frequently wash your hands with soap and water as you’re cleaning and dispose of all cleaning materials when you’re done.

Another way to keep yourself and your loved ones safe is to stay up-to-date on the spread of the virus in your area. You can do so by checking the CDC map, which tracks monkeypox cases by state, as well as state and local health department alerts.

Monkeypox isn’t considered a sexually transmitted disease, but the CDC says researchers are still trying to sort out whether the virus can be found in semen, vaginal fluids and feces. Sexually active individuals should be open about their potential exposure to the virus, and ask your partner or partners to do the same.

Pregnant carriers who are about to give birth are advised to have C-sections to mitigate the risk of transmitting the virus to their newborns. Additionally, there have been reports of preterm deliveries, pregnancy loss and stillbirths.

What should I do if I’m experiencing symptoms?

Whether you’re actively experiencing symptoms or believe you’ve come into contact with a potential carrier, the first step is to isolate yourself to prevent the spread of the virus. Then, reach out to a health care provider who will determine whether you should be tested.

However, getting a test can be easier said than done. Scientists have told NPR the outbreak in the U.S. is bigger than the official case count, with one calling the testing situation “abysmal.”

The WHO is advising people to isolate themselves for three weeks from the time they believe they may have been exposed and to limit contact with others while awaiting test results.

Your health care provider will explain what to do should you test positive for monkeypox. According to the WHO, the virus should run its course, and symptoms should clear up on their own in two to four weeks without the need for treatment.

If you’re experiencing the tell-tale symptoms, here are some tips from the WHO:

If you live in a shared household, isolate in your room and if possible, use a designated bathroom. Use separate eating utensils, towels and electronics, and do your own laundry. Open your windows whenever possible for good ventilation, but avoid sweeping and vacuuming, which could disturb virus particles found on the floors and lead to further infections.

The U.S. uses two types of smallpox vaccine to fight monkeypox as past data suggest these vaccines could be 85% effective against that virus as well. In the current outbreak, the CDC says there is no available data on the effectiveness of either vaccine.

The CDC says those who have been exposed to monkeypox and haven’t had a smallpox vaccine within three years should get one sooner than later. The agency recommends individuals get inoculated within four days of exposure and no later than two weeks to reduce symptoms.

Side effects of the vaccines can include mild fever, tiredness and swollen glands as well as redness and itching at the inoculation site.

Unfortunately, there’s a limited supply of one of the vaccines — more are expected to be made available in the coming weeks and months — and the other shouldn’t be taken by individuals with some skin conditions, those with a weakened immune system and people who are pregnant.