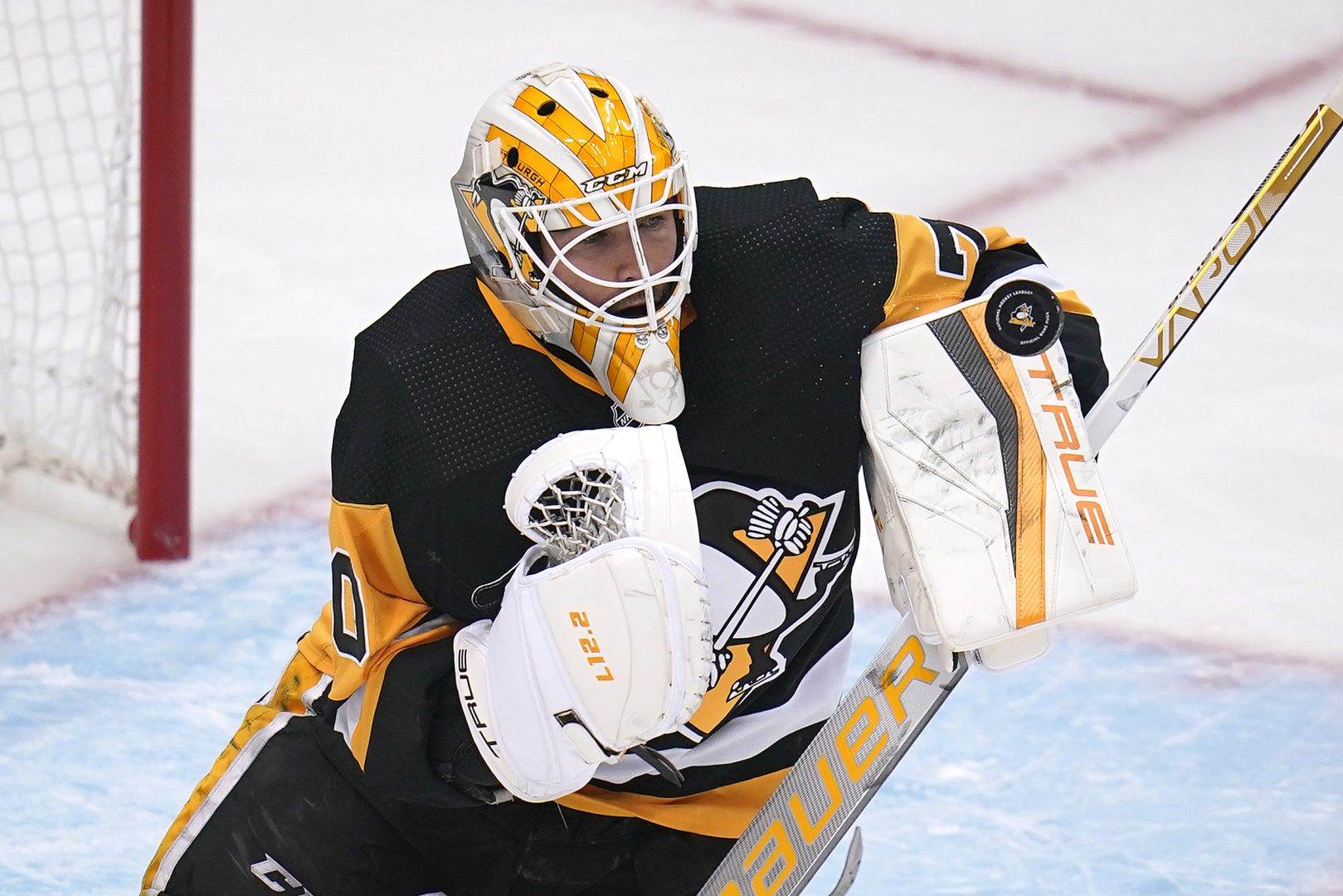 (Pittsburgh) — Louis Domingue remembers dragging a net out into the street, pulling on his rollerblades and dreaming what it would be like to be in the NHL playoffs.

The reality is surpassing the Pittsburgh Penguins’ backup to the backup goaltender’s greatest expectations.

The journeyman stopped 32 shots — including a handful on the penalty kill in the third period with the Penguins reeling — to set the stage for Danton Heinen’s late tally as Pittsburgh surged past the New York Rangers 7-4 on Saturday night to take a 2-1 lead in their first-round series.

“In the last whatever, seven years, I’ve been in and out of the league, it’s the first time I’m a rookie again,” said Domingue, thrust into action with All-Star Tristan Jarry and top reserve Casey DeSmith both unavailable due to injury. “I’m a rookie in the playoffs … every day is a new day for me. It’s a new experience.”

A wild one at that.

The Penguins grabbed control of the series heading into Monday night’s Game 4 by chasing Vezina Trophy-favorite Igor Shesterkin in the first period, blowing a three-goal cushion in the second then responding even with the top line of Sidney Crosby, Jake Guentzel and Bryan Rust contributing nothing on the scoresheet until New York’s net was empty in the final minutes.

“A lot of teams don’t recover from (losing a three-goal advantage),” Pittsburgh head coach Mike Sullivan said. “I think it speaks volumes to the leadership and the character of our group that we were able to move by it.”

The Penguins killed off a pair of penalties in the first half of the third to keep the score tied before Heinen jumped on a loose puck near the New York goal line and flicked a shot by Alexandar Georgiev 11:02 into the third to put the Penguins in front to stay.

“Bit of a rollercoaster, for sure. You hate to be in the box, you hate taking penalties,” said Heinen, who was given a 2-minute minor in the third for slashing. “Our kill was unbelievable. Louis was our best killer. But the guys battled for me there, and I was lucky enough to get one.”

Evan Rodrigues had two goals and assisted on another for the Penguins. Jeff Carter also scored twice for the Pittsburgh while Brock McGinn started the scoring on what became two-plus hours of seismic momentum shifts with his first goal of the playoffs.

Kaapo Kakko, Frank Vatrano, Artemi Panarin and Andrew Copp scored for the Rangers. Georgiev finished with 19 saves on 20 shots after taking over for Shesterkin, who was chased after allowing four goals in the first period.

“Igor has been outstanding,” New York head coach Gerard Gallant said. “Really, you look at it right now, and he’s played 10 periods the last four and a half days, five days, whatever it is. I thought it was a good time to jumpstart it. Fortunately for us, we battled back in the second and tied it up. Unfortunately, in the third, they get a goal.”

The Penguins sent Shesterkin to the bench with a dazzling start in which they erupted for four goals — two by Rodrigues — only to promptly squander it with a second-period meltdown culminated by a turnover by defenseman Kris Letang that led directly to Copp’s short-handed tally that tied it at 4.

New York’s push continued into the third. Pittsburgh’s penalty kill — which had given up a goal in each of the first two games — held firm, with Domingue making a sliding stop on Panarin, a save that bought enough time for the Domingue’s teammates to steady themselves.

“We believe in ourselves,” Domingue said. “Once you enter the dance I think any team can win. Maybe we came in a little bit as the underdog but we certainly feel like we belong and showed that tonight.”

The Penguins overwhelmed Shesterkin by throwing bodies and pucks at the net with equal abandon. The first capacity playoff crowd at PPG Paints Arena in three years was in full throat as it lauded Shesterkin — whose 118 combined saves in the first two games was an NHL record — with chants of “IIIIIIIGOOORRR.”

Shesterkin stayed on the bench to start the second period — just the third time he’s played only 20 minutes — and the Rangers responded with a massive push in front of Georgiev to rally.

Copp provided a tying score that seemed inevitable after Kevin Rooney stripped Letang and darted to the net. Domingue made the initial save but Copp knocked in the loose puck as the net was dislodged to draw the Rangers even with 4:01 left in the second. The go-ahead goal, however, never materialized as the Rangers failed to re-claim home ice in a series that has all the ingredients of one that could go the distance.

“We had a chance to change the game and we couldn’t get one,” Rangers forward Ryan Strome said. “So it was obviously frustrating, especially after clawing all the way back.”