People march in the middle of East Pine Street during the "Fight Starbucks' Union Busting" rally and march in Seattle, Washington on April 23, 2022. (Photo by Jason Redmond / AFP) (Photo by JASON REDMOND/AFP via Getty Images) 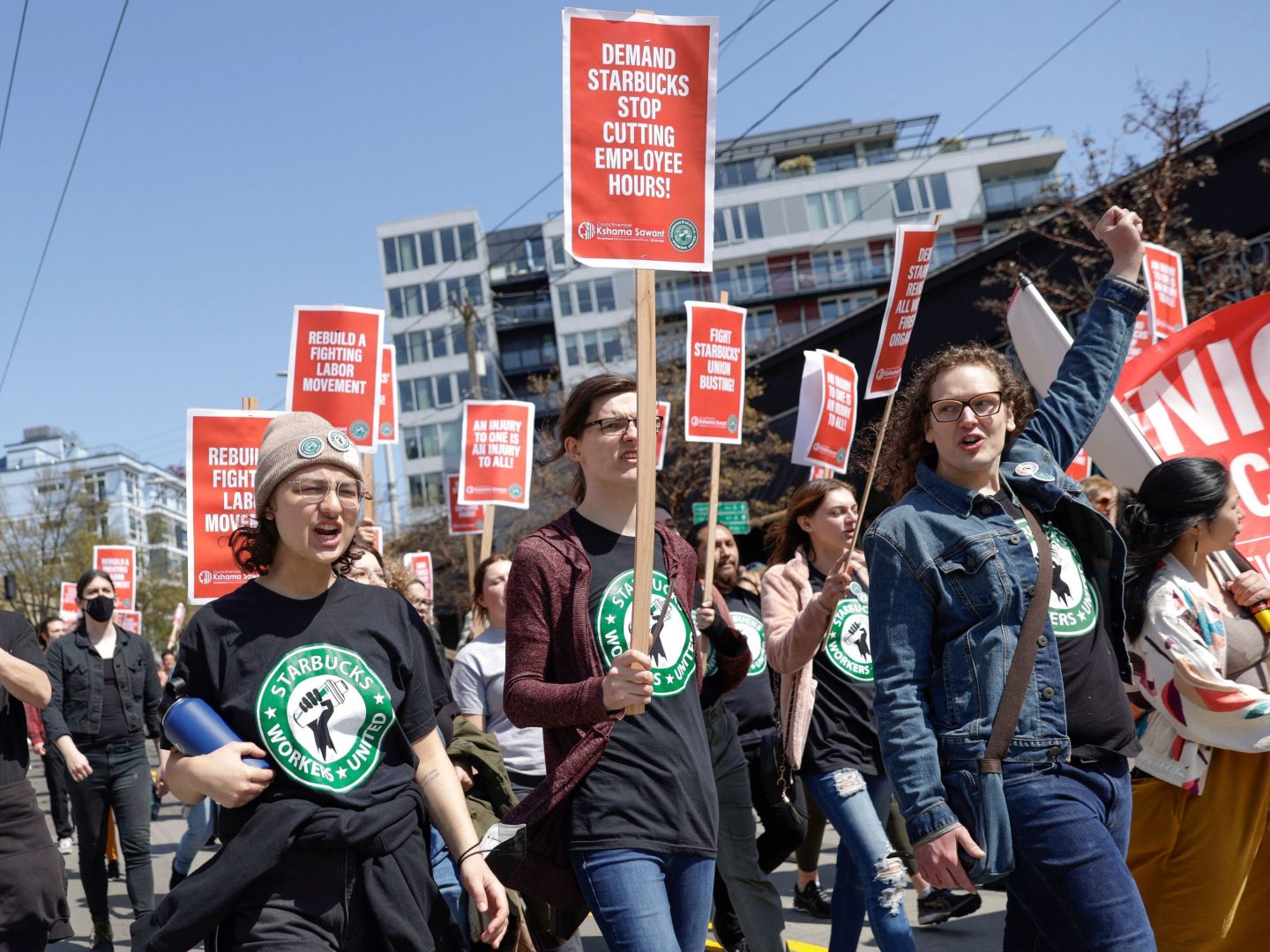 People march in the middle of East Pine Street during the "Fight Starbucks' Union Busting" rally and march in Seattle, Washington on April 23, 2022. (Photo by Jason Redmond / AFP) (Photo by JASON REDMOND/AFP via Getty Images)

(Undated) — On August 30, 2021, three Starbucks stores in and around Buffalo, New York, filed union election petitions with the National Labor Relations Board.

The Starbucks unionizing effort is remarkable, not only because of the stunning speed at which it has spread — more than 40 Starbucks stores have voted to unionize — but also because food and drink establishments have traditionally been among the least unionized workplaces in the U.S. Only 1.2% of all workers in the sector were unionized in 2021, according to the Labor Department.

So far in 2022, the accommodations and food services industry makes up 27.5% of all union election petitions, with a small number of independently-owned coffeehouses in cities such as Minneapolis, Philadelphia and Nashville joining hundreds of Starbucks locations all around the country in seeking union representation.

“Organizing is contagious,” says Kate Bronfenbrenner, director of labor education research at Cornell University’s School of Industrial and Labor Relations, noting the ease at which workers can now connect with each other over cell phones and social media platforms.

Other factors contributing to the recent wave of organizing: a labor-friendly administration in the White House, a Democratic majority on the NLRB, and a strong labor market. Job openings remain at record highs, leading some workers to cast aside fears over speaking out and demanding more from their employers.

NLRB elections are just one path to unionizing

Not all workers seeking to organize do so through the union election process. Under the National Labor Relations Act, private-sector workers may persuade an employer to voluntarily recognize a union after demonstrating that a majority of workers support unionizing. Bronfenbrenner has found that a far greater share of private-sector organizing, including among hotel staff and janitorial workers, happens outside union elections.

Still, an examination of who is filing election petitions with the NLRB reveals important shifts that are happening in worker organizing, even as union membership in the U.S. remains low, with just over 6% of private-sector workers unionized. (The National Labor Relations Act does not cover public-sector workers, about a third of whom are unionized. Their rights to organize vary widely from state to state.)

Organizing has moved away from manufacturing toward other industries

The number of union election petitions filed between January and April of this year is only slightly more than the number filed in the same period in 2012.

But since 2012, the share of petitions coming from manufacturing companies has fallen by about half, according to NPR’s analysis. Bronfenbrenner says the drop has come as employers have moved or threatened to move jobs elsewhere to get away from unions.

“There’s a 75% chance when you go to organize in manufacturing, that the employer will threaten to shift production out of the country,” says Bronfenbrenner. So the manufacturing unions have shifted to other industries, including non-profits and health care, where it’s easier to organize, she says.

So far in 2022, there have been a sizable number of election petitions from industries where unions already have a foothold: security, waste management, transportation and health care.

But there are also groups of workers seeking union representation in 2022 that are nowhere to be seen in the 2012 data: Amazon warehouse workers, college students working as residential advisors, “budtenders” at more than a dozen cannabis shops.

“This has been evolving over time,” says Bronfenbrenner. “The workforce is changing, and naturally, who’s a union worker is changing.”

The pandemic and other factors have spurred younger people to unionize

In 2021, according to the Labor Department, union membership was highest among middle-aged workers (ages 45 to 54) and lowest among younger workers (ages 16 to 24). But that could be changing, as unionizing successes at Starbucks and Amazon have garnered national attention.

The organizing at Starbucks stores has involved many baristas in their 20s. Chris Smalls, the president of the Amazon Labor Union and a former warehouse supervisor, is in his early 30s. At both companies, workers have cited the pandemic as a major impetus for organizing, saying their companies did not do enough to protect them from the risks of COVID or reward them for carrying on with the work that has made their companies highly profitable over the past two years.

As they seek to organize, the workers are finding a lot of support — from the White House, from their peers, and from the public. A Gallup survey from last summer found that 68% of Americans approve of labor unions, a number not seen since 1965.

Will Chase, Susie Cummings and Julia Wohl of NPR’s Research, Archives and Data Strategy team contributed to this report.