‘Agriculture is the culture’: FarmerJawn wants to reinvent agriculture education

“We focus on being able to teach people how they can do this, how to integrate agriculture into your everyday lifestyle, not just by being mindful of what you eat, but also the act of doing if you so choose" 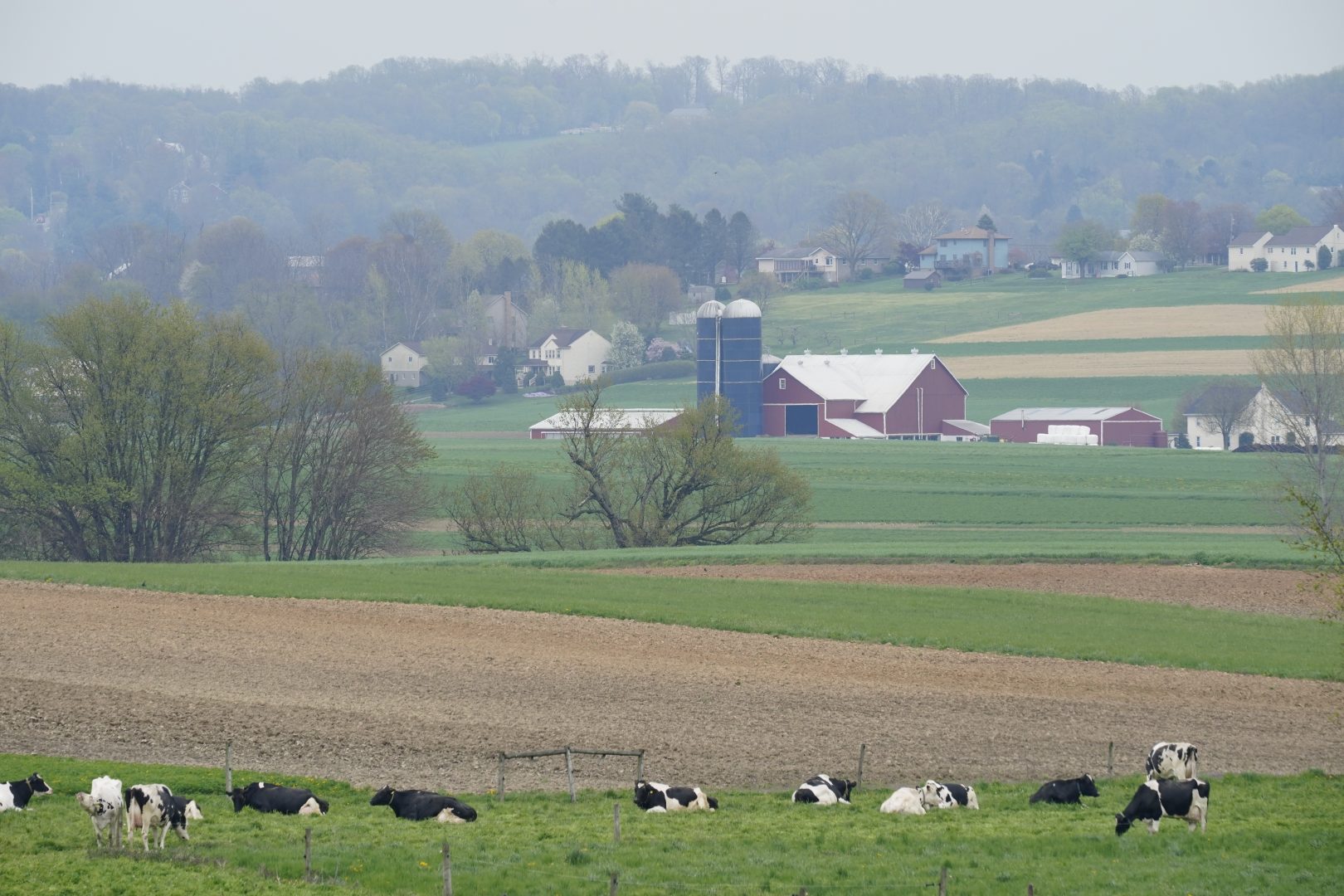 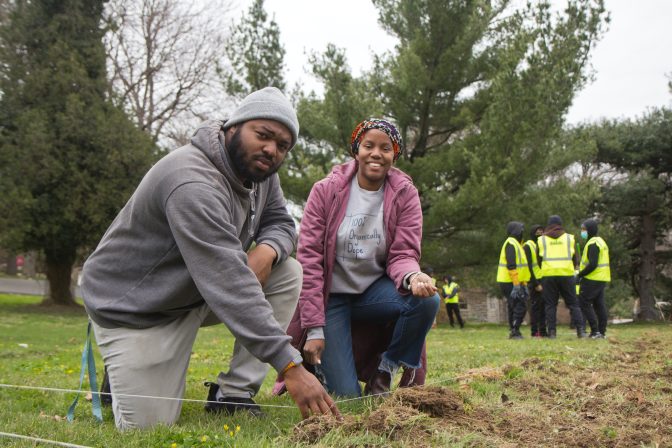 The year was 2018 and it was an ordinary day. Unexceptionally ordinary. Christa Barfield, who was 30 at the time, arrived at her job in health care administration, sat down at her desk, and felt crestfallen about her career choice.

She wanted a switch and resigned. Shortly afterward, she took a trip to the Caribbean that would change the course of her life. Barfield saw Black farmers — farmers who looked like her — and decided that act of “community” was the life for her.

Barfield went home and researched agriculture, looking for specific gaps that she would excel at filling. Her first farm got started right afterward in the form of a 4-foot by 6-foot greenhouse in her backyard in Germantown.

The seeds Barfield sowed in 2018 have since grown and sprouted, both literally and figuratively.

Now in full bloom, Barfield is the founder and chief executive officer of FarmerJawn Agriculture, a culmination of projects with the goal of “reintroducing farming into the lifestyles of urban people.” Most notably among those projects, finding a home for FarmerJawn at the Elkins Estate.

The five acres of the historic property in Elkins Park, just minutes outside of Philadelphia, have recently become the “biggest part” of Barfield’s operation. She moved her operation onto the property in October 2021, where they will be using the greenhouses and land to farm a wide variety of crops like lettuce and radishes.

“Farming should not be this obscure idea and feel like it’s a journey that you have to go to. You eat every single day. So there’s a farmer that’s responsible for that food that you’re partaking of. And I really want our community to be more mindful of what we’re putting into our bodies for the health of not just ourselves, but the people that come after us,” Barfield said, standing next to a recently tilled plot of land. 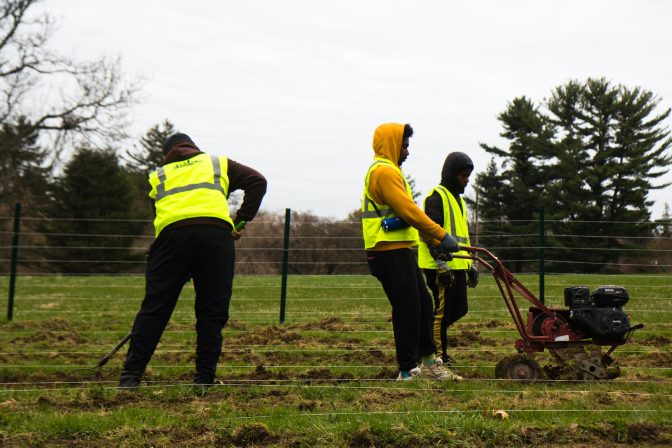 Members of the Power Corps Trust program work with Farmer Jawn at their Elkins Estate farm, doing tasks such as tilling, raking, and planting, on April 5, 2022. (Kimberly Paynter/WHYY)

While FarmerJawn makes its money from its community-supported agriculture (CSA) farm set up and other business ventures, it has recently jumped into the fray as a nonprofit that seeks to educate people about how to farm and where their food comes from.

The FarmerJawn & Friends Foundation Fund is looking to serve as an educational platform with a focus on school programming and workforce development.

“We focus on being able to teach people how they can do this, how to integrate agriculture into your everyday lifestyle, not just by being mindful of what you eat, but also the act of doing if you so choose. Being able to get your hands dirty, starting a farm from scratch, like literally taking a piece of land and saying like I want to farm — this is what that’s all about,” Barfield said.

PowerCorpPHL, a workforce development program that seeks to engage young adults ages 18 to 30 and formerly incarcerated people, is one of FarmerJawn’s first partner organizations. Every single Tuesday, about 25 members from the group’s The Road to an Ultimate Successful Transition (TRUST) program come to the farm to get their hands dirty.

Dominic Speach, 30, is the project manager for the TRUST program and his job usually entails helping young people with legal, housing, education, and employment issues. The workforce program pays its cohorts and it also involves trauma-informed community building sessions.

“We talk about a lot of things that are going on in the city as far as gun violence, the murder rate, COVID, to things like that. We give our young folks a safe space to unpack those different things,” Speach said. “What we’re trying to accomplish is to keep our young folks engaged and out of trouble. TRUST started back in February 2021 and we had a zero recidivism rate so nobody got incarcerated. Throughout that time, nobody died.”

As laughter and the purring of a garden tiller filled the air, Speach said that the young people in the TRUST program had a lot of fun working on the farm. 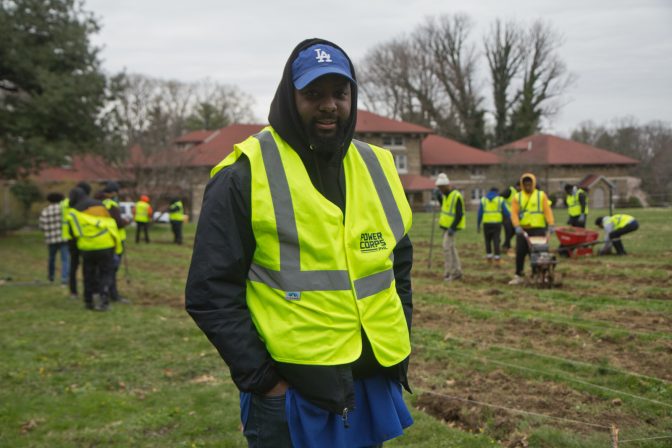 “Getting that education around what [healthy] food is, helping our community as well as educating them on food insecurities, and making sure that they have access to healthy foods, our young people taking that back into their neighborhoods all around the city, and giving that information to their neighborhoods has been great,” Speach said.

Speach got connected with FarmerJawn at Elkins Estate through Brandon Ritter, the chief operating officer for the FarmerJawn & Friends Foundation Fund. He said they’ve been coming to the Elkins Estate for about three months, assisting them with clearing out the greenhouses and getting the ground operational.

Ritter has been tasked with handling a lot of the responsibilities of the nonprofit.

He also has a history with farming, dating all the way back to the age of 12 when he was helping out on a small production farm. He has enjoyed his time working alongside Barfield “basically starting from the ground up.”

“I’ve always stuck with the nonprofit part, because it’s really critical for us to have access to fresh and healthy foods and to usher in organic food pathways into the city. And that happens when you have a lot of people who live in places and look like the people that you’re trying to work with doing the work,” Ritter said. “As a community organizer, I look at work that we’re doing as critically important to a lot of the other issues that we’re dealing with in the city regarding gun violence and other situations.”

He added that communities of color face the brunt of food scarcity issues in the city, which is why they are trying to increase the number of people who know how to grow their own food.

“What we’re trying to do is to alleviate some of that pressure by building a system that is truly built to get at the root of those issues. This being a capacity issue where people don’t know how to grow their own food and don’t have access to the people who grow their own food,” Ritter said.

FarmerJawn is planning a plethora of educational programming to confront the problem in all age groups.

Barfield and Ritter are looking into a homebound program for older folks and those with disabilities who may not be able to leave their houses.

They are already working alongside groups like PowerCorpPHL to help younger adults.

And they also have a school-based program in conjunction with students from Cheltenham High School who study and work as interns. The project-based learning also allows for seniors in the program to come to the Elkins Estate twice a week and help run the CSA program. 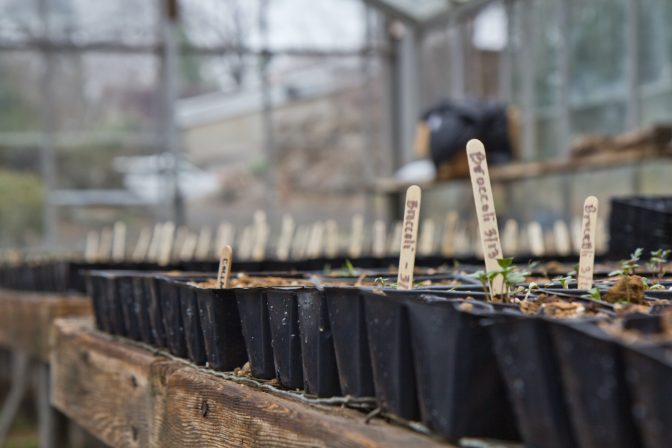 Thousands of seedlings inside the Farmer Jawn at their Elkins Estate farm, in Elkins Park, Pa.

Karen Shaffran is a longtime teacher in the Cheltenham School District and three years ago she shifted from teaching in Cedarbrook Middle School to teaching at the high school.

Through conversations with the new superintendent at the time, Shaffran came to a realization that the more she discovered about project-based learning, the more it seemed like her “sweet spot.”

So, the district decided to experiment with the altered learning system.

“At the same time that we were looking into how we could bring project-based learning to the district, we were approached by a donor who had some history with us. He had student-taught at the high school, and he has a family foundation that was interested in seeing if we would sort of go all-in with project-based learning, and he would fund the professional development of a cohort of teachers to sort of see that as a high school,” Shaffran said.

She was a member of that group of teachers and they were sent to a school district in San Diego that has been utilizing project-based learning in grades K-12 for about 15 years. They got a run down from the staff on their experiences and decided to apply it in Cheltenham just for 9th graders.

And as the students progressed in grades, the project would expand with them.

Now, in year five of the program that “functions like a school within a school”, project-based learning is available for all high school students.

“We’ve done all kinds of things, but definitely a fan favorite has been this partnership with FarmerJawn,” Shaffran said.

Students have been integral in the research and design process for the farm at Elkins Estate. They self-selected groups and helped design different parts of the FarmerJawn setup. From the greenhouses to the potential for a goat enclosure, the students envisioned something special.

Shraffran first got connected with Barfield in the 2021-2022 school year after reading about her previous farming venture in the area. She was able to get two students placed at the space that she was at. However, FarmerJawn was going through a rough patch and had to move her operation out of Cheltenham Township.

It wasn’t until Shaffran was going on a walk with her son that they discovered the developers in charge of Elkins Estate were open to doing business and sharing the space. So for months without Christa’s knowledge, Shaffran had conversations with the developers and was able to help FarmerJawn find a home there.

“People already love Christa as a human being and her mission and to actually then be able to get fresh, local organic produce, both from a convenience standpoint, but also as … a reduction of environmental impact that our food is going to be grown locally,” Shaffran said. “To have that as an example of entrepreneurship, of caring for the planet, of a woman owning a business, everything about it — it’s such a gift to us and to me as an educator.”

Barfield and Ritter already have a lot on their plate, but they’re looking to roll out a complete itinerary of school-based programming in the coming year.

However, Barfield doesn’t want to leave anyone out.

Ritter wants people to know that the motto is “agriculture is the culture” and he’s hoping that with increased visibility, FarmerJawn’s nonprofit can address greater societal issues.

“Our supporters and partners really help us make this work happen. And also, we have some incredible people who are looking to fund this great work because it does take money to keep the lights on, if you will. So I’m thankful for all of those folks, and we just look forward to continuing our great programming,” Ritter said. 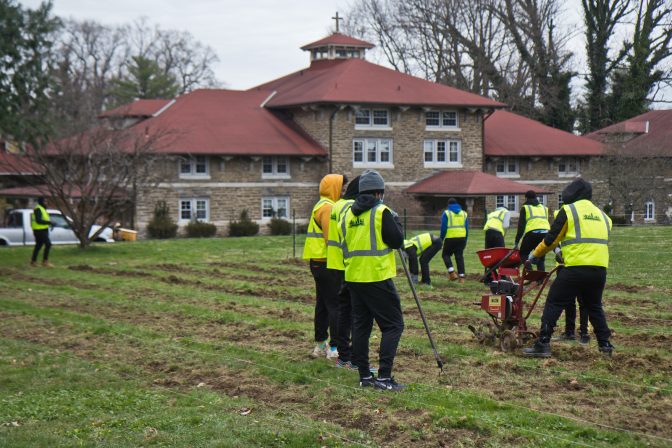 Members of the Power Corps Trust program work with Farmer Jawn at their Elkins Estate farm, doing tasks such as tilling, raking, and planting, on April 5, 2022.

While FarmerJawn’s Greenery is having its grand opening on Earth Day at its storefront at 6730 Germantown Avenue, its nonprofit is still a work in progress and is still under development. Plants are already growing in the greenhouse in preparation for its first CSA set for June 1.

However, Barfield will be hosting different events on the property soon in the meantime to raise money for the nonprofit.

She takes pride in being a Black woman owning a business in a space that she hopes will be a catalyst for other Black people to start their own adventure in farming.

“Our nonprofit is really, really revving up and gearing up to make a huge impact in this community,” Barfield said.