A booth at the Great American Outdoor Show in Harrisburg is seen on Feb. 7, 2019. The NRA offers free admission to the show for people who join or renew their membership.

The National Rifle Association is losing members, according to internal documents

The NRA said it's in a good position financially and attributed the loss in revenues and membership to the COVID-19 pandemic. 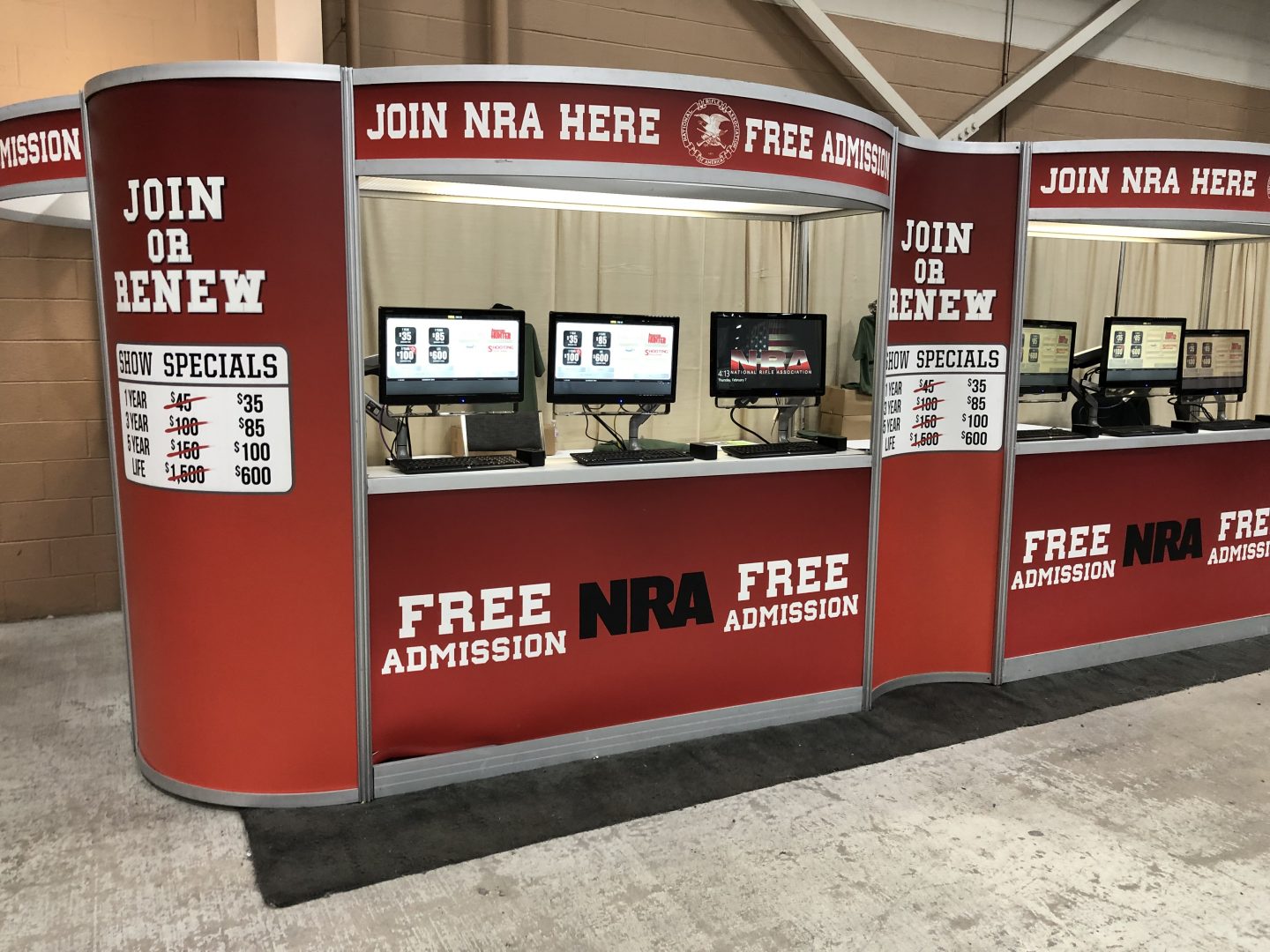 A booth at the Great American Outdoor Show in Harrisburg is seen on Feb. 7, 2019. The NRA offers free admission to the show for people who join or renew their membership.

The Great American Outdoor Show is drawing good crowds this week at the Farm Show complex in Harrisburg.

The event’s sponsor – the National Rifle Association – has been dealing with financial and membership struggles in recent years.

That’s according to the independent publication TheReload.com, which focuses on gun related issues and analysis.

Reload Founder Stephen Gutowski says the NRA’s revenues were down more than $19 million last year following legal threats from the New York attorney general and allegations of corruption against its leadership.

The National Rifle Association responded to Gutowski’s article and said the organization is in a strong financial position and the recent struggles have been because of the COVID-19 pandemic. The NRA’s full statement is below.

Our conversation has been edited for length and clarity.

Listen to the conversation:

witf · interview with Stephen Gutowski from The Reload

Stephen Gutowski: I’m Steven Gutowski , founder of TheReload.com. The Reload is an independent informed publication that focuses on firearms, reporting and analysis. We were founded last year in April, 2021. So we’re relatively new.

Jeremy Long: How did you come about those documents and can you give me the behind the scenes of your reporting? As much as you can?

Gutowski: Well, The Reload was given this internal financial report from a source and was able to verify it with another source who had knowledge of the NRA’s finances before we published it. We obviously spoke with the NRA’s  press department as well and included their reaction to what’s in the report in order to be as fair as possible to the organization.

Long: Were you shocked with what the report showed?

Gutowski: Yeah. I mean, the NRA has obviously gone through a series of public struggles over the last several years, and it’s no surprise to anyone that they’re doing poorly financially. Or at least not doing as well, but I think the fact that their revenue had fallen by more than, or by, by about half since  2018. It was pretty shocking to learn.

Long: I did see the NRA’s response to your article and they attributed the pandemic to a drop in funding. What I thought was interesting, was the drop in membership as well. Do you think that was more shocking than the financial drop?

Gutowski:    Yeah, I mean, The NRA’s true power comes from their membership.

They have the largest dues paying membership, meaning that people actually pay them money to be a member. It’s pretty different from any other group out there or even most political groups generally. And that’s why they have so much influence. So, the fewer members they have, the, the worst off the organization is going to be.

To see their numbers decline even after, an adversary like President Joe Biden was elected, and even in the middle of a huge gun buying surge, 2021 was the second best gun sales year ever. Only bested by 2020 and the NRA wasn’t gaining membership in that time.

It’s very concerning, I think, for the organization or any of the supporters.

Long: What do you think is causing that drop or decline in membership?

Gutowski:  I think the pandemic is obviously something that has had a serious effect on. Most non-profits like a NRA spokesperson. Any hunter told me, but at the same time, the NRA has also been experiencing internal turmoil and external legal threats over a series of allegations that NRA leadership, including CEO Wayne LaPierre, diverted millions of dollars in nonprofit funds towards their own personal expenses for luxury clothing and private jets and vacations. And that’s had an effect. 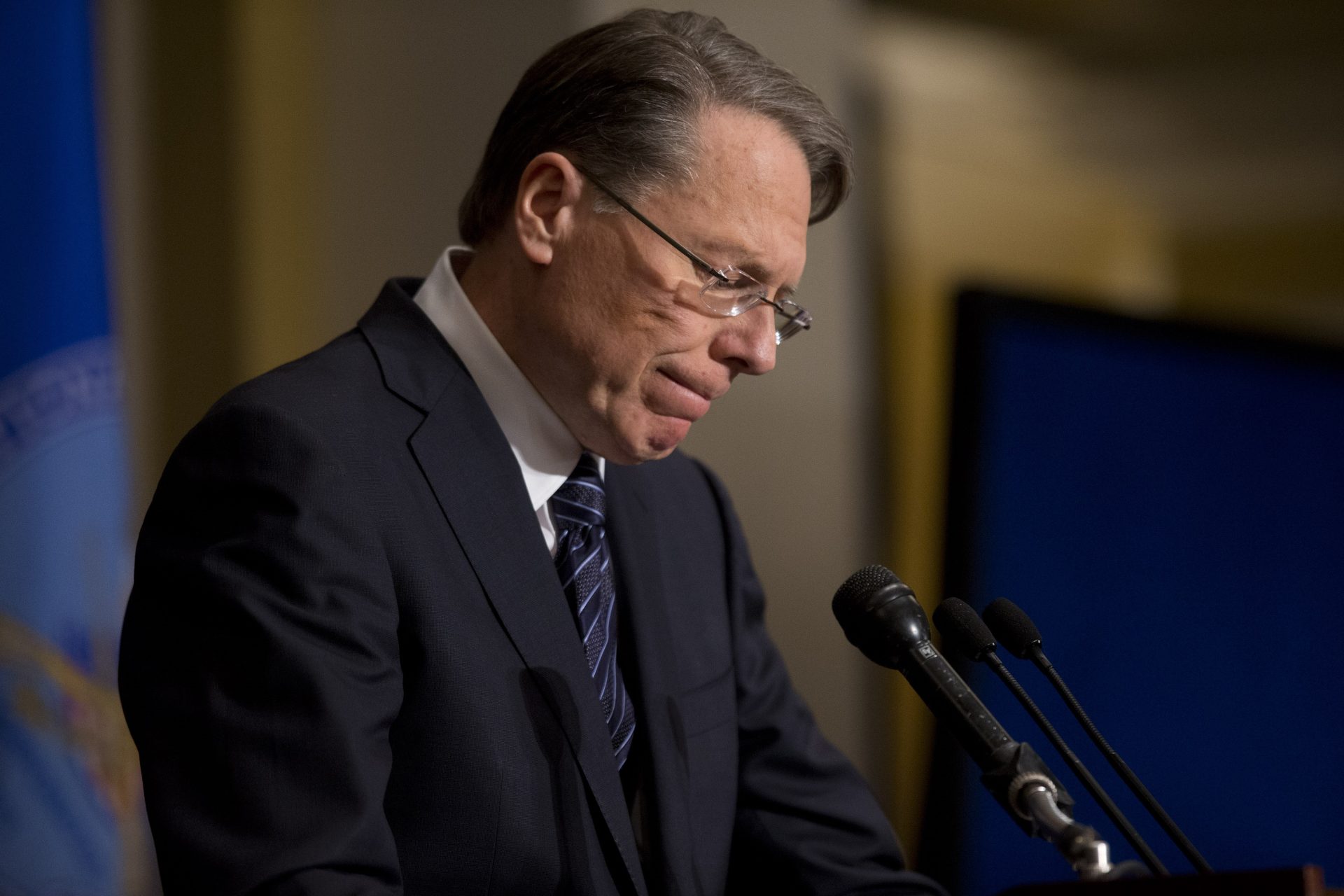 The National Rifle Association executive vice president Wayne LaPierre pauses as he makes a statement during a news conference in response to the Connecticut school shooting, on Friday, Dec. 21, 2012 in Washington. The National Rifle Association broke its silence Friday on last week’s shooting rampage at a Connecticut elementary school that left 26 children and staff dead.

Long: Are you seeing a lot of NRA members dropping and going to other groups like Gun Owners of America or supporting  Firearms Policy Coalition?

Gutowski:  Well, I think there’s always been criticism of the NRA from the right on guns. There’s always been alternatives like Gun Owners of America that do pick up membership because they argue the NRA is not strident enough in its gun rights activism.

I don’t know that that’s really the main driver of what’s happening over the last couple of years. I think the pandemic and the corruption allegations have much more of an effect, but I do imagine that people who are leaving to the NRA, at least some of them, probably are going to other groups like FPC and GOA and local state groups as well.

Long: You noted in 2017 the NRA’s membership rebounded. Do you think it could rebound again or what would have to happen for it to hit those levels again?

Gutowski: A lot of political groups have fluctuations in membership when there’s no elections and you’ll see their membership decline. And then it’ll bounce back during election year.

But the decline isn’t to the point yet where it’s irreversible for the NRA. They’ve managed to right their financial ship by bringing in more revenue than they’re paying out in expenses, mainly by cutting a lot of their programs, but they’re still somewhere north of 4.5 million members.

And if they are able to figure out the issues they have with leadership or regain the trust of a lot of people who left over the allegations of corruption and they’re able to start having their fundraisers again, just like the one they’re actually having right now, just outside of Harrisburg, the great American outdoor show.

That’s bringing in a lot of people, that’s one of their first big events they’ve been able to do in two years. So, certainly the NRA could rebound from this. And I don’t think it’s outside of the realm of possibilities that you get back to 5 million members or even go beyond that. If they fix things.

Gutowski:  I think one thing that’s important to note when you’re talking about NRA membership and potential for rebound is the way that they’ve gotten to a more stable financial footing over the last two years is by cutting a lot of the services that people really love. The NRA for you. It’s a thing in education, community outreach, competitive shooting. A lot of those things have taken hits while they’ve massively increased spending on their legal fees to the point where legal fees are now the second biggest sector of the group’s spending, well above what it spends on those other core services. And so, in addition to fixing and properly responding to the allegations of corruption within leadership, they’re going to have to start ramping up those services again at some point or else that’s when they really going to face a potential spiral that leads to further loss of membership.

Gutowski:  The vast majority of those legal fees at $31 million, they spent through the first eight months of 2021 went towards the lawsuits that they’re caught up with surrounding the allegations of corruption. Whether it’s the New York attorney General’s lawsuit against them seeking to dissolve the whole organization altogether over these allegations, or whether it’s the legal fight they’ve gotten into with their former contractor, Ackerman, McQueen.

Part of their organization is a non-profit, a 501c3 that they use to fund more of the gun rights lawsuits. Like the ones involved with the Supreme Court right now. They’re backing the gun carry case at the Supreme court, but there’s a different funding mechanism for those kinds of suits.

Long: Thank you. That’s all I had unless there was anything else you wanted to add, mention or note.

Gutowski: No, I think that’s everything.

“The subject matter here is an outdated, unaudited financial report,” she told The Reload. “Naturally, the NRA is not inclined to discuss non-public business strategies with those outside the organization. In any event, the NRA report is, as objective observers agree, very positive. We sank an ATF nominee who was adverse to the Second Amendment. We are winning many battles to elect pro-Second Amendment lawmakers. We are driving the passage of constitutional carry – the gold standard of self-defense. And we are confronting a New York Attorney General who openly vowed to destroy our organization. With respect to legal fees, we are defending the interests of our members against people who portray them as terrorists and criminals. The NYAG called the NRA a ‘terrorist organization’ and a ‘criminal enterprise’ before she was even elected – without a shred of evidence to support her claims.”

“With respect to questions comparing figures from a pre-pandemic 2018 to 2020 (figures during a worldwide pandemic), the NRA, like many others, continues to confront this global pandemic that forced the cancellation of many events and impacted revenue streams,” Hunter said. “The safety and well-being of our staff and members is paramount. Through it all, the NRA has emerged stronger – better positioned to fight for its members and their freedoms. The Association and its patriotic members deserve an enormous amount of credit.”