(Chambersburg) — More than three years ago, Melissa Mattson contacted the Chambersburg Borough Council to ask if they would consider adopting a non-discrimination ordinance.

For Mattson, who identifies as a lesbian, the protection afforded by the measure is a personal matter.

She said when she and her former partner tried to find a baby-sitter for their son, some people turned them down because they were against the idea of a child having two moms. 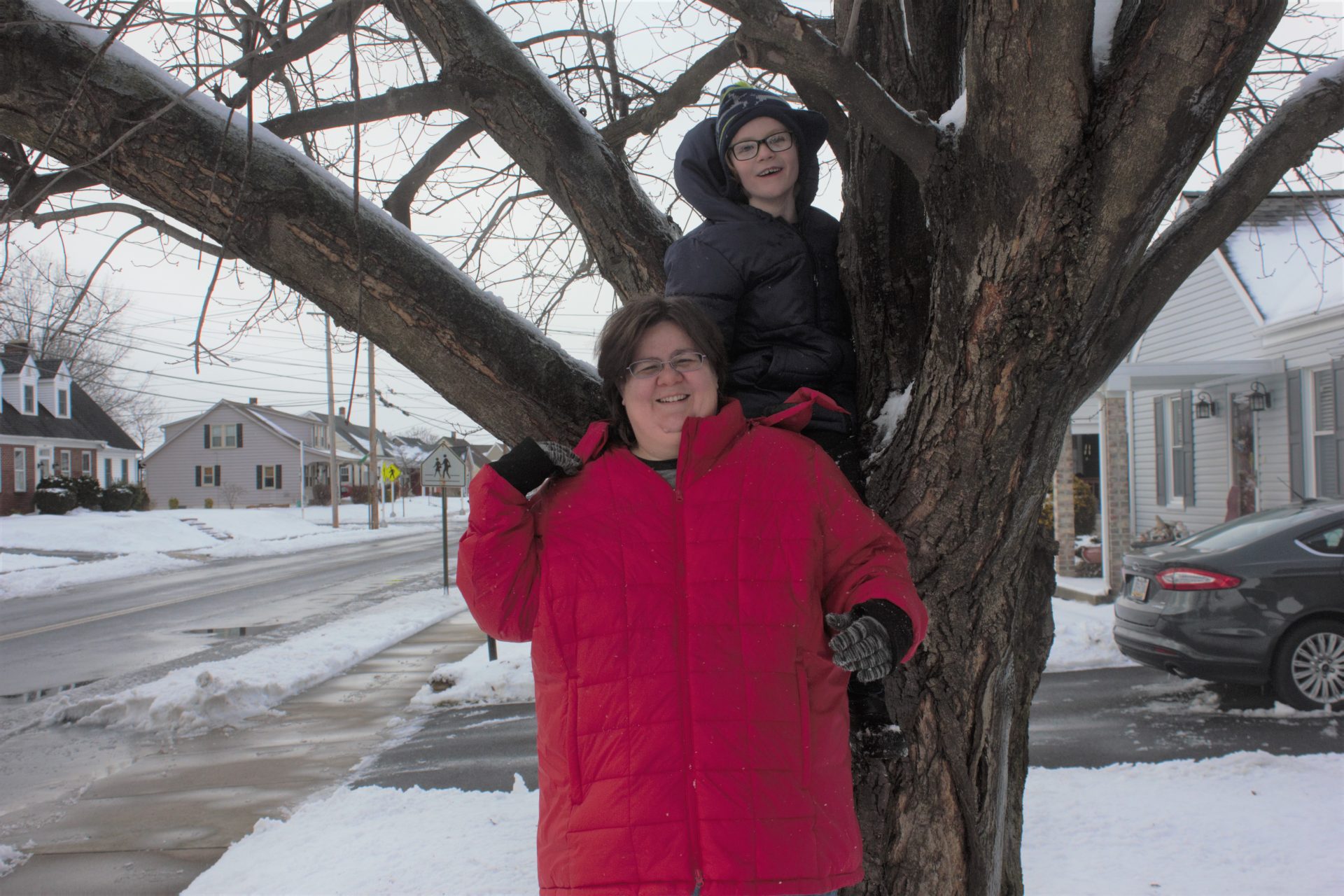 Melissa Mattson and her 7-year-old son Benton in front of their house.

Mattson works at South Central Community Action Programs in the borough, where she often helps people file discrimination claims with the state as part of her job helping unhoused people connect to resources.

So when the borough council approved the ordinance – and overrode the former mayor’s veto – last fall, she felt a sigh of relief.

The ordinance would broaden the definition of sex-based discrimination to include gender and sexual orientation, in addition to providing protections for people from all racial, ethnic, and religious backgrounds. It also would establish a human relations commission to hear discrimination claims, and a mediation option. If mediation fails, the person could take their claim to the Court of Common Pleas.

Mattson told herself not to get overly excited. Six Democrats and one Republican voted in favor of the law; three other Republicans voted against. But the Nov. 2 elections were coming up and the council still had to appoint members to the human relations commission.

“I didn’t want that heartbreak that they were going to repeal it. I think part of me thought they would just let it go and move on,” Mattson said.

But the council did not let it go.

Commission members were not appointed in January. Instead, the newly elected council – now made up of seven Republicans and three Democrats – voted to begin the repeal process.

Chambersburg could become the first municipality in the state to repeal such a law.

“The ordinance has now been in effect for a few months, we haven’t had any problems with it, there have been no issues, it hasn’t cost any money. It hasn’t caused any kind of uproar,“ Councilmember Alice Elia said. “And yet, this is one of the first things they want to eliminate.”

The law’s opponents say it could hinder the business sector. Allen Coffman, Republican borough council president, says the ordinance itself is not enforceable, and that discrimination complaints should only be handled by courts.

In 2021, a council exploratory committee recommended adopting a law to cover a gap in state law, and it noted protections are needed because one-third of Chambersburg’s community is non-white.

The borough had also gathered information about the community through focus groups in which about 27 people participated.

“People shared painstaking stories and experiences at times that demonstrated specific challenges and needs, like housing, that also reflected a larger challenge in their lives, such as systemic racism, and experiences of exclusion, disparity of opportunity, or discrimination that were affecting their fundamental quality of life here in Chambersburg,” said Nicole Hewitt from  Hewitt Consulting, Research, & Training, one of the facilitators of those groups.

At least 70 Pennsylvania communities have passed their own laws to broaden the definition of discrimination by sex.

Gettysburg is one. In fact, Chambersburg’s ordinance is modeled after Gettysburg’s.

Matthew Moon, who sits on Gettysburg council, said one of the reasons the borough decided to adopt the ordinance was to establish a mediation program. That way, it could be accessible to low-income people who might not be able to afford to take a discrimination complaint to court.

“The real thrust of this was that this was about our neighbors helping each other, we want a peaceful resolution between peers. If that mediation fails, you can still go to the Court of Common Pleas,” Moon said.

The Gettysburg council, which has four Democrats and three Republicans, voted unanimously every time the ordinance came up for a vote.

Shippensburg passed a non-discrimination law with a majority vote in 2020 after a Shippensburg University student was denied an opportunity to rent an apartment due to his sexual orientation.

State College has had a non-discrimination ordinance since 2007. Yvette Willson, a lawyer and a member of State College’s Human Relations Commission, said “there has been talk” about expanding the commission into a countywide entity.

“With a local ordinance, you’re much more likely to be able to resolve issues, definitely on a more immediate and perhaps an easier process because there’s folks in your community that are already aware of these issues,” Willson said.

The Pennsylvania Human Relations Act does not explicitly protect people on the basis of LGBTQ identity. In 2018, the state human relations commission issued guidance to expand the definition of discrimination based on sex to include gender identity, but those guidelines are not codified into law. The act also authorizes municipalities to pass ordinances.

The Pennsylvania Human Relations Commission declined to comment for this article.

On Jan. 3, Chambersburg’s new majority Republican council voted 6-3 (one Republican was absent) to move forward with an effort to repeal the non-discrimination law.

Thomas Newcomer, a Republican elected to council on Nov. 2, said he heard from people against the ordinance while he was campaigning. He said repealing the law was a “mandate” from the voters who elected him.

“I think it was all Democrats that passed this, so does that make the Republicans right or the Democrat right or wrong? It was one-sided,” Newcomer said.

Coffman has been a council member for more than 20 years. He is now council president.

“The ordinance serves no purpose, you can hope that you’re going to get two people to sit down and talk to one another and work this out. But if it’s that serious already, I don’t see any way that mediation, sitting down with somebody is going to work it out,” Coffman said in an interview.

Like Newcomer, he said that his constituents opposed the law.

“These last four years or so, especially the last two, there’s been a lot of focus put on these social issues, which are not playing with our constituents here. They want us to run the borough, they don’t want to get into these social issues,” Coffman said.

If the council repeals the ordinance, Chambersburg Mayor Kenneth Hock could veto or approve the repeal. Hock did not respond to a request for comment.

There were hour-long public comment segments in the meetings leading up to the vote to approve the ordinance.

“These are people who felt like we had maybe made some progress and who are now just heartbroken and saddened by the community that they live in,” Elia said. ”You keep beating people down and they’re like, ‘okay, I’m done.’ And that’s sad.”

One of those people was Shannon Brown, one of the many residents who spoke out in meetings last year.

“I had people on the job ridicule me, make fun of me. I just had to stand there and take it because I had no recourse,” Brown said. “I’m tired of being left in the cold.”

For Melissa Mattson, it has also been a discouraging turn of events.

“I wanted to leave Chambersburg. I was just like, I can’t do this,” she said. “But at the same time, this is where I’ve chosen to call home and I can’t just up and leave when I lose my rights. I do want to raise my son here. So I’m gonna fight.”

She’s been working with the Franklin County Coalition for Progress to help disseminate information about the non-discrimination ordinance. She says she may now shift her efforts to advocating for statewide LGBTQ protections.

A 9-8-8 crisis line is coming. Mental health services ask: How do we stretch even more?