Underlying all the labor shortages? A ‘crisis’ in the child care sector creating a vicious cycle for working parents

“I’ve been in this industry for 30 years, we’ve always talked about the challenges of hiring … but we’ve never seen this before." 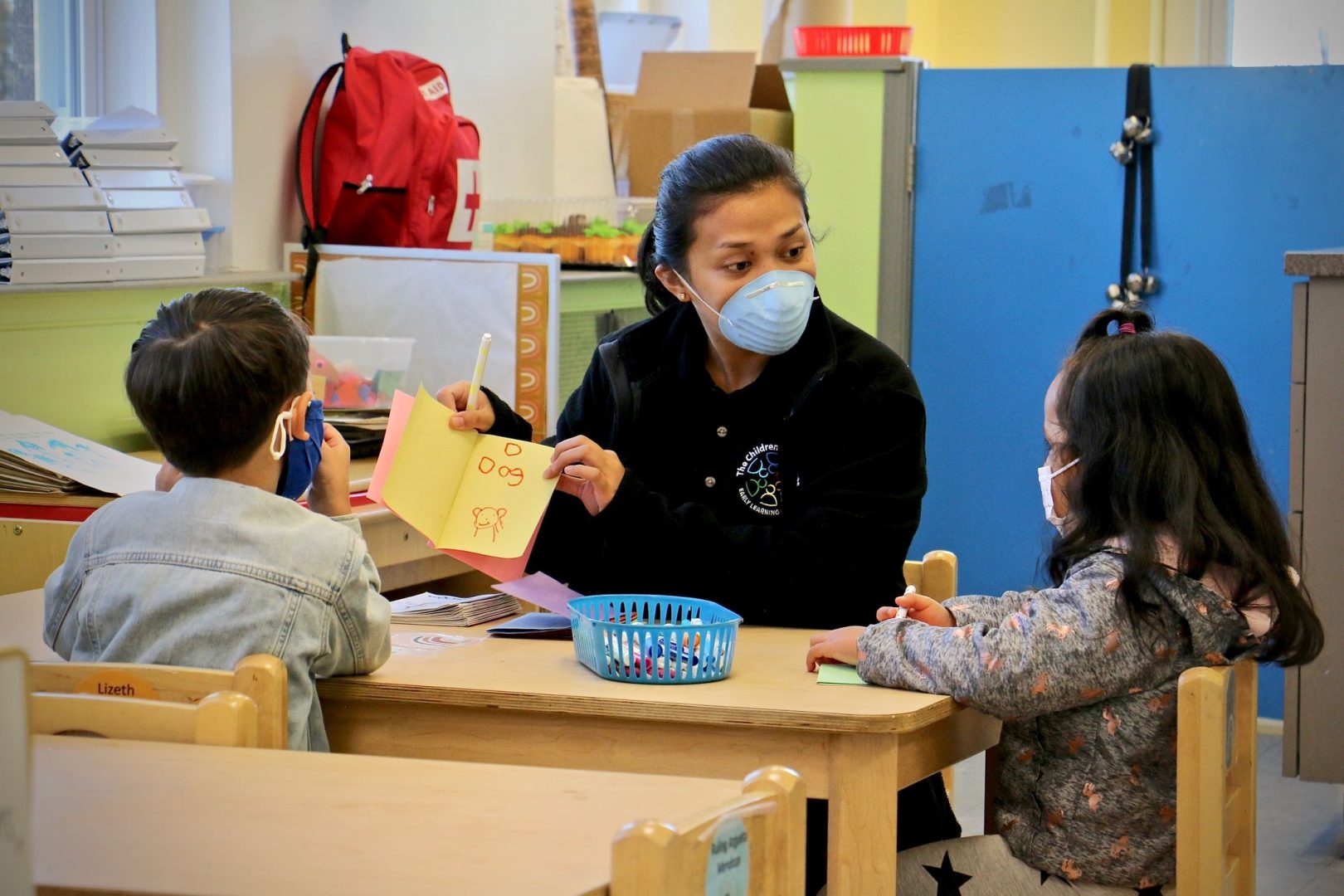 (Philadelphia) — Shannon Wink, a digital strategy and communications professional in Fishtown, has been trying unsuccessfully to get her 15-month-old daughter into day care since last winter. Each time, the answer is: Sorry, we’re full. Try again later.

“You can’t just snap your fingers and find child care. It’s a real process,” she said.

Providers and their advocates say their hands are tied. Wages in the industry coupled with ongoing COVID-19 concerns make it difficult to attract enough early childhood teachers to meet demand.

“I’ve been in this industry for 30 years, we’ve always talked about the challenges of hiring … but we’ve never seen this before,” said Diane P. Barber, executive director of the Pennsylvania Child Care Association.

A shortage of child care workers across Pennsylvania is among the factors contributing to wider-rippling labor shortages across the economy. With thousands of fewer spots for kids, many parents trying to rejoin the workforce or being pulled back to offices are stymied by the realities of the child care sector. Government assistance for providers has so far not restored the industry to pre-pandemic levels, and, nationally, the industry shed 10,000 jobs between June and August 2021, according to federal data.

A recent survey of 1,163 day cares in Pennsylvania helped quantify the distress. Statewide, 92% of child care respondents were short-staffed, according to Start Strong PA, a group that lobbies for child care funding. Across the commonwealth, more than 25,000 children sit on their waitlists.

Kendra Jackson reads to her class of preschoolers at Children’s Playhouse Whitman, an early childhood learning center in South Philadelphia.

Pre-pandemic, the Greater Philadelphia Y had approximately 950 kids enrolled at its early childhood centers. Now, it has 610. To be fully staffed and clear the waitlists would take 40-50 hires, said Segelken.

“It’s been like pulling needles out of a haystack,” said Damaris Alvarado-Rodriguez, executive director of Children’s Playhouse, which runs two early learning centers in South Philadelphia.

She started recruiting in June for the fall school year. Still, she is down five classroom staff: three infant-toddler teachers, one lead teacher, and one assistance teacher. Their waitlist is about 20 kids long, and several classrooms are closed due to lack of staff. Next month, Alvarado-Rodriguez is requiring all employees to be vaccinated. Some already already got vaccinated to be able to work with the School District of Philadelphia, but she fears the mandate will cause a further staff exodus.

The health risks through the pandemic in the sector, though, have been real. Child care workers who stayed on the job put themselves, and their families, at risk.

The former director at Children’s Playhouse, for instance, caught COVID-19 at work and spread it to her father, who lived with her. He then died due to the virus.

“That became a very traumatic experience … She couldn’t bounce back” and eventually moved on, said Alvarado-Rodriguez, who took on the director’s duties.

Providers and experts say the industry is in a difficult position. Child care workers, like those in retail and the restaurant industry, often labor under undesirable conditions. Odd hours, low pay, and lack of stability all contribute to turnover.

As of May 2020, the median salary nationally for a child care worker was $12.24/hour, or $25,460 per year, according to the Bureau of Labor Statistics. An analysis by the Center for the Study of Child Care Employment at U.C. Berkeley puts it even lower in Pennsylvania, just $10.69/hour.

However, raising child care salaries without passing on the costs to parents, who already spend on average about 10% of their income for the service, can be hard. Even raising wages to be competitive with retail or fulfillment positions from employers such as Walmart or Amazon can be cost prohibitive for small employers like Alvarado-Rodriguez.

“If I raise my rates to pay for the staff and to give them what they deserve … then it’s really going to affect the families that we serve,” she said.

Certified development associates start at $14.50/hr, but those with higher education degrees can make more. Children’s Playhouse pays lead teachers with a bachelor’s degree $18-$21/hr, and those with a master’s can make up to $25. Alvarado-Rodriguez has started offering retirement contributions and education assistance to try to retain workers.

At the Greater Philadelphia YMCA, child care positions range from approximately $12-18/hour, along with benefits, professional development, and retirement, “which is not necessarily standard across the industry,” said Segelken.

Some have even started offering cash up front. Wonderspring, which operates early childhood centers in and around Narberth, is offering $1,500-$2,000 signing bonuses up front to new hires. 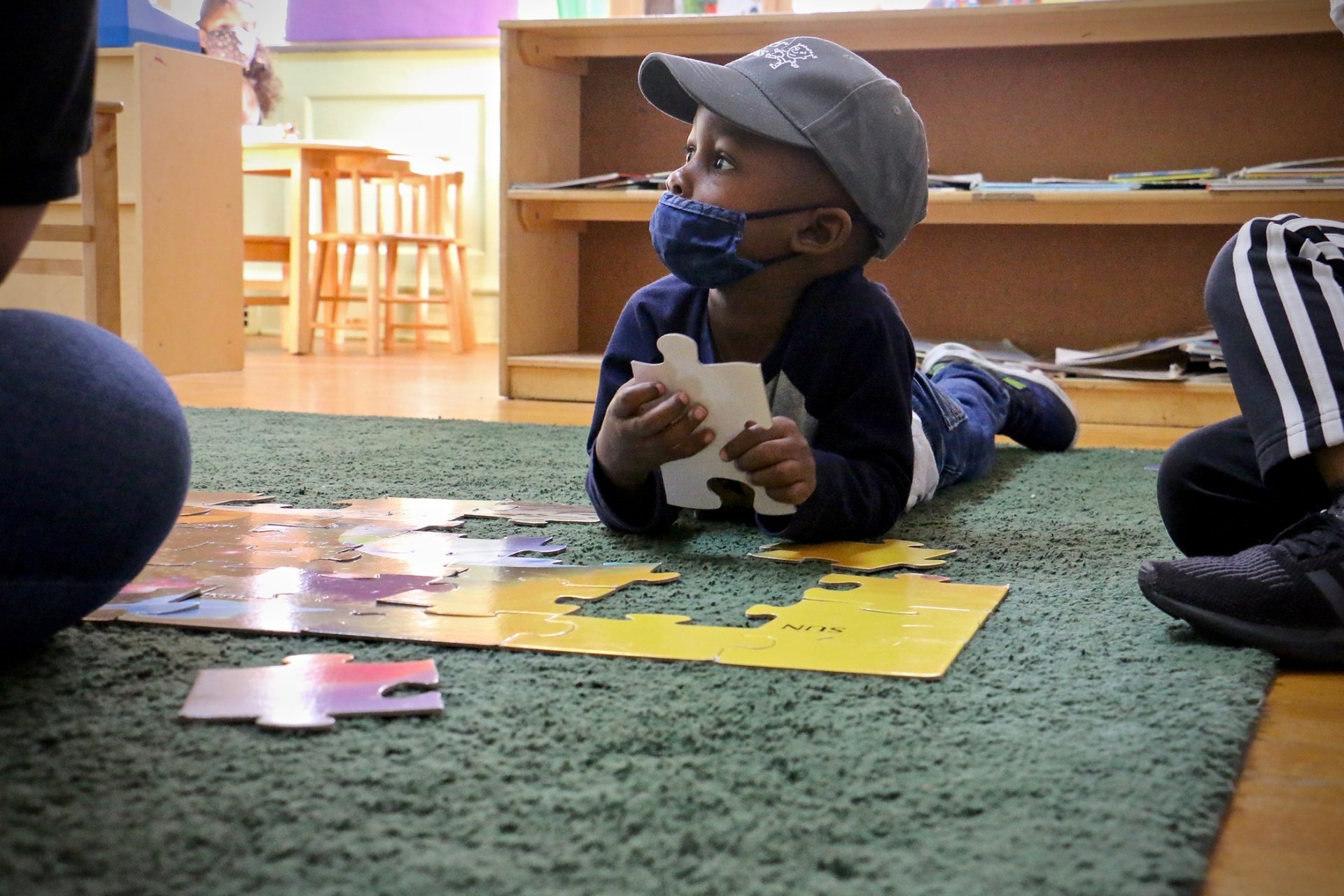 Gabriel Watson, 3, works on a puzzle during his preschool class at Children’s Playhouse Whitman in South Philadelphia.

“They still aren’t getting people,” said Barber, of the Pennsylvania Child Care Association. She said she gets calls from providers weekly who are considering leaving the business or describing difficulty getting anyone to respond to their wanted ads. Other applicants will simply “ghost” the providers. “I’ve had stories where they’ve gone through the interview process and then they don’t respond to the [offer] letter,” she said.

For Wink, the mom of a 15-month old, the lack of child care options have been a source of constant stress. She recently started a new job and goes into the office some days. Her mother watches her daughter some of the time, but if not, Wink or her husband is on duty.

“[My daughter]’s gotten older and needs more attention, needs more stimulation,” said Wink. “That’s hard to do when you’re also trying to send an email or sitting in on a staff meeting.”

Because day care is often funded through a combination of public sector dollars and parent contribution, raising wages in the sector without adding cost to families is a balancing act.

Gov. Tom Wolf recently announced $655 million in grants to prop up the industry, paid for with stimulus funds from the American Rescue Plan Act. The single biggest investment since the start of the pandemic, these grants already have 2,924 applicants, according to The Office of Child Development and Early Learning (OCDEL).

However, “none of it has been allocated specifically for workforce,” said Mai Miksic, director of early childhood policy with the advocacy group Children First. “Because of that, providers have to pick and choose, like, ‘Do I pay for the leaking roof, or do I raise the salaries of my teacher aides?’”

State officials said they specifically designed the fund to be flexible, and they acknowledged that using one-time funds to raise salaries is tricky. “If they’re only able to do it as a result of receiving these funds [we ask them] to make sure that they’re being transparent with their staff that this is a limited bump in their wages,” said Tracey Campanini, deputy secretary for the Office of Child Development and Early Learning.

Wages are “one of the challenges that we haven’t figured out,” she continued.

Economic experts say solving that challenge is a key to getting the overall economy back on track, particularly for women, who have exited the workforce in much larger numbers than men during the pandemic.

The Biden administration’s American Families Plan proposes putting $225 billion over 10 years into affordable child care to make it low- or no-cost for working parents. The plan would also put a wage floor for workers at $15/hr. Aspects of that plan are now incorporated into the Democrats’ embattled $3.5 billion budget plan.

Barber hopes lawmakers are starting to grasp more fully how her sector intertwines with the economy writ large.

“This crisis has shone a light … But what we need is we need action,” she said.