The key to Pittsburgh's ability to hang around in what looks to be a very competitive AFC North is how quickly the pieces start fitting together.

(Pittsburgh) — Nearly two decades in, Ben Roethlisberger is well versed in the rhythms of the season. The first win is met with perhaps unbridled and unrealistic optimism. The first loss, the polar opposite.

The Steelers (1-1) managed to get both out of the way during their first two weeks, following up a rousing victory in Buffalowith a second-half clunker at home to Las Vegas that finished with a steady stream of players heading to the injury report, Roethlisberger included.

The 39-year-old is dealing with a left pectoral issue sustained at some point against the Raiders. He sat out practice on Wednesday, hardly unusual at this point in his career, and said he will do what he can to be on the field Sunday when Pittsburgh hosts Cincinnati (1-1).

“We’re not panicking,” Roethlisberger said. “It’s only the second week. We’re 1-1. We lost to a team that’s 2-0 and it was a one-score game until the end. So it feels like a bad feeling, a bad loss. But we understand it’s still early in the season. Everyone in our division has the same record.”

Even if everyone doesn’t have the same vibe. While Roethlisberger cautioned before the opener he expected some “growing pains” while an offense featuring a new coordinator and four rookies — including two on the line — found its footing, it’s one thing to say that and another thing to experience it.

Far too many times against Las Vegas, Roethlisberger was picking himself up off the Heinz Field turf. He was hit 10 times and sacked twice. 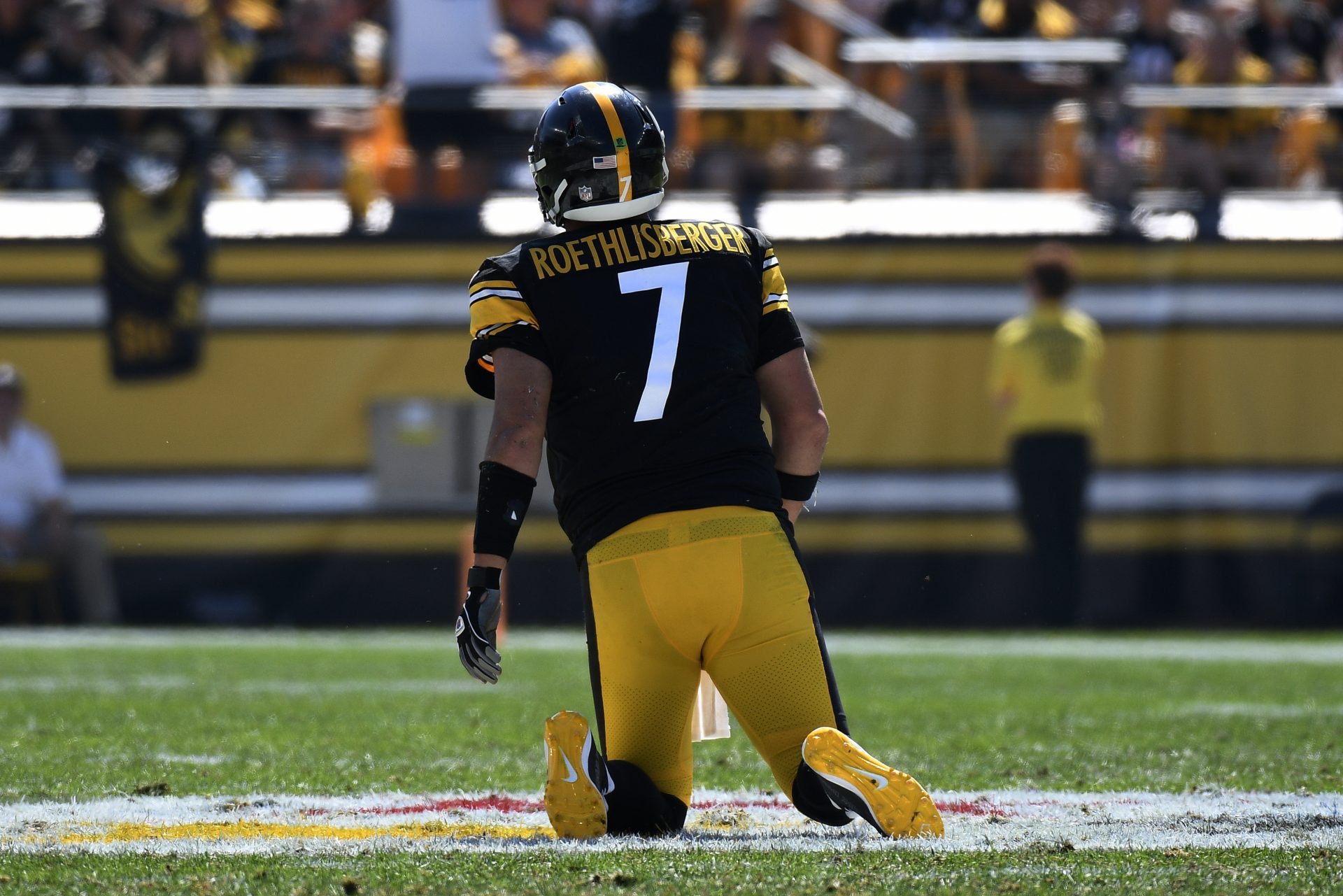 Pittsburgh Steelers quarterback Ben Roethlisberger (7) gets up slowly after being sacked during the first half of an NFL football game against the Las Vegas Raiders in Pittsburgh, Sunday, Sept. 19, 2021.

Perhaps more jarringly, there were no teammates around to help him up, something that almost never happened when good friend and former Steelers center Maurkice Pouncey was the one snapping Roethlisberger the ball.

It’s not a good look, particularly for an unproven line still searching for some sense of cohesion. Left guard Kevin Dotson acknowledged Wednesday he and left tackle Dan Moore Jr., center Kendrick Green, right guard Trai Turner and right tackle Chuks Okorafor need to do a better job of helping Roethlisberger back to his feet.

Of course, it’d help if they did a better job of making sure it wasn’t required, and Dotson knows it. Yes, a learning curve is part of the process, particularly early on. That doesn’t make it any easier to endure.

The key to Pittsburgh’s ability to hang around in what looks to be a very competitive AFC North is how quickly the pieces start fitting together. It’s one thing for the running game to be last in the NFL, as it was a year ago. It’s another to have problems creating running room for first-round pick Najee Harris while also struggling to keep Roethlisberger upright.

At the moment, the line is having issues with both.

Roethlisberger, in typical fashion, is making an attempt to absorb some of the blame. He did it in the immediate aftermath on Sunday on an afternoon he threw for 295 yards with a touchdown pass and an interception. He doubled down on Wednesday.

“We all need to be better,” he said. “To eliminate hits. To have a better run game. To have more big plays. To be more efficient. It’s on all of us to help those things.”

It’s the getting to that point that’s tricky. The relationship Roethlisberger has with this line is far different than the one he enjoyed with Pouncey, David DeCastro and Alejandro Villaneuva. The three — who combined for 17 Pro Bowls — spent the better part of a decade protecting Roethlisberger.

When Roethlisberger’s friendship with Pouncey began, Dotson was in middle school. Now Pouncey is retired and Dotson is part of the group tasked with trying to make the final chapter(s) of Roethlisberger’s career successful. 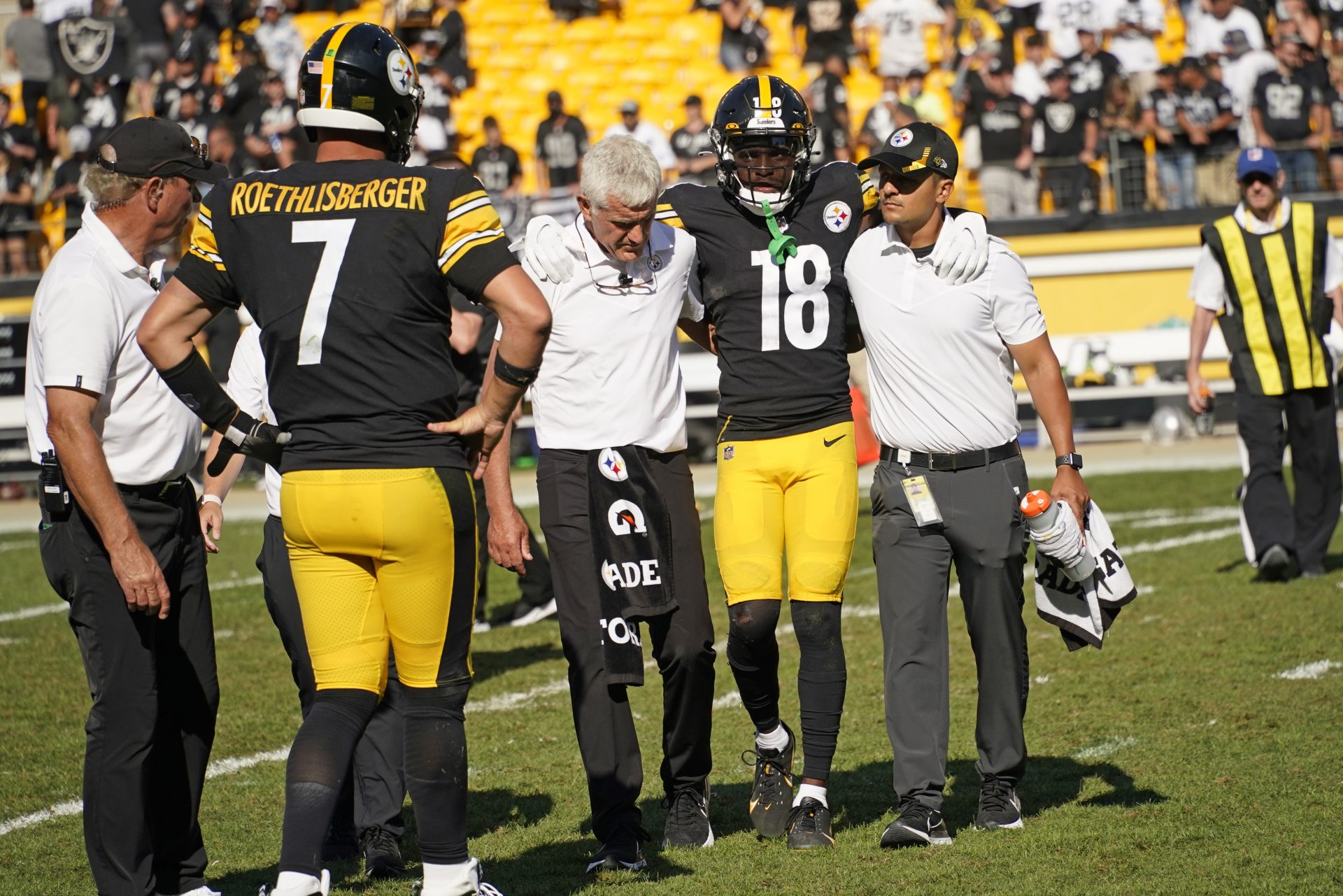 Pittsburgh Steelers quarterback Ben Roethlisberger (7) watches as wide receiver Diontae Johnson (18) is helped off the field after being injured during the second half of an NFL football game against the Las Vegas Raiders in Pittsburgh, Sunday, Sept. 19, 2021.

Roethlisberger doesn’t go into the offensive line meetings and tell the kids how to do their jobs, but he does try to send a message on what defines success.

“What I can do is just try to emphasize how important it is to play for your brother, to play for the guy next to you,” Roethlisberger said. “Doesn’t matter that you can go out there, say, well, ‘I did my job today.’ But if we didn’t win the game and it didn’t help the team win, it shouldn’t matter.”