FILE PHOTO: A JetBlue Airbus A320 taxis to a gate Wednesday, Oct. 26, 2016, after landing as an American Airlines jet is seen parked at its gate at Tampa International Airport in Tampa, Fla. The Justice Department is suing to stop American Airlines and JetBlue from coordinating their flights in the Northeast. Government antitrust lawyers said Tuesday, Sept. 21, 2021, that the deal between the two airlines will reduce competition and lead to higher fares.

US sues to stop deal between American Airlines and JetBlue 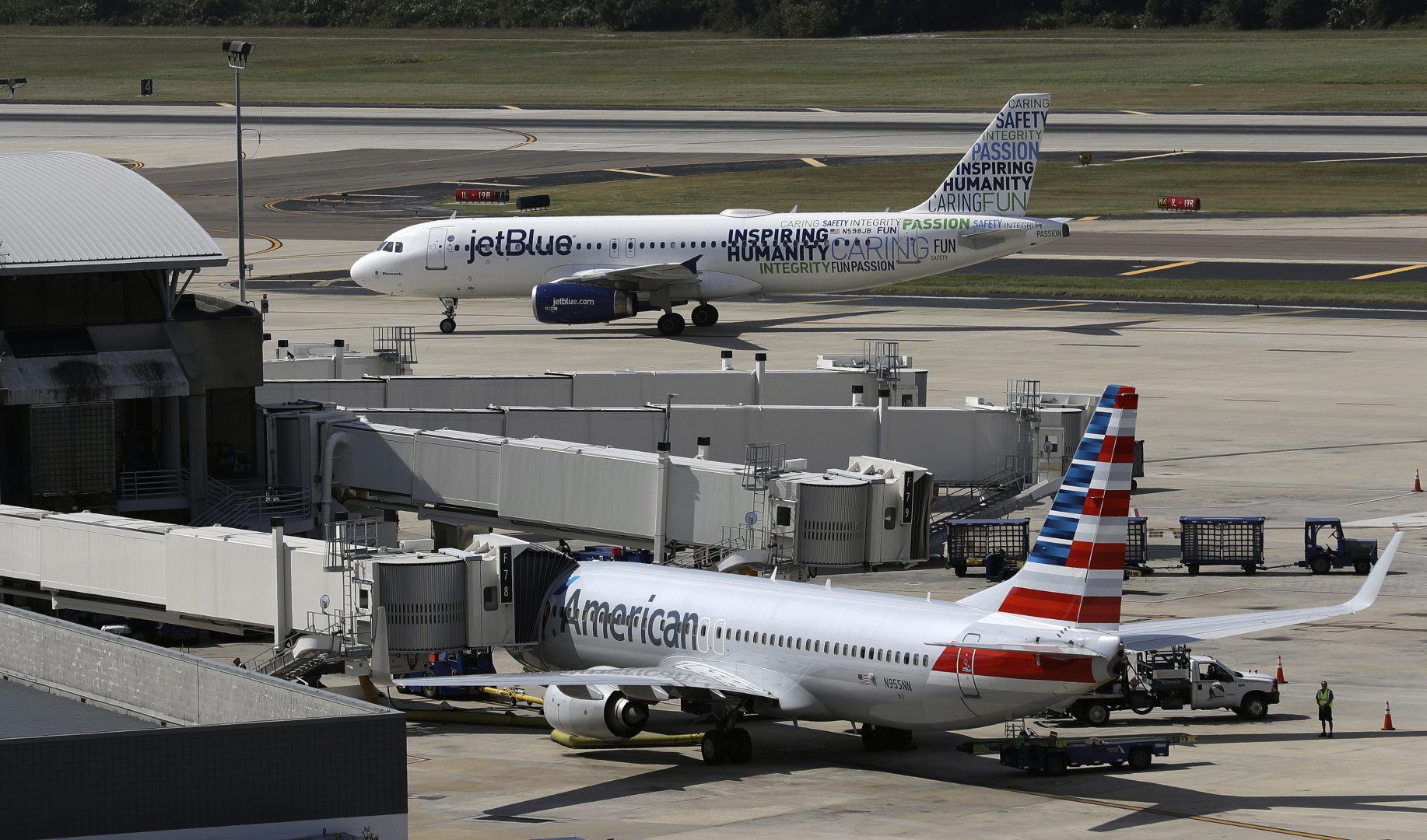 FILE PHOTO: A JetBlue Airbus A320 taxis to a gate Wednesday, Oct. 26, 2016, after landing as an American Airlines jet is seen parked at its gate at Tampa International Airport in Tampa, Fla. The Justice Department is suing to stop American Airlines and JetBlue from coordinating their flights in the Northeast. Government antitrust lawyers said Tuesday, Sept. 21, 2021, that the deal between the two airlines will reduce competition and lead to higher fares.

The Justice Department and officials in six states have filed a lawsuit to block a partnership formed by American Airlines and JetBlue, claiming that it will reduce competition and lead to higher fares.

The Justice Department said Tuesday that the agreement will eliminate important competition in Boston and New York and reduce JetBlue’s incentive to compete against American in other parts of the country.

“In an industry where just four airlines control more than 80% of domestic air travel, American Airlines’ ‘alliance’ with JetBlue is, in fact, an unprecedented maneuver to further consolidate the industry,” Garland said in a statement. “It would result in higher fares, fewer choices, and lower quality service if allowed to continue.”

The airlines vowed to fight the lawsuit.

American and JetBlue say they have started 58 new routes from four airports in the Northeast, added flights on other routes, and plan new international routes through 2022 because of the partnership.

American CEO Doug Parker said blocking the JetBlue deal will “take away consumer choice and inhibit competition, not encourage it. This is not a merger: American and JetBlue are – and will remain – independent airlines.”

JetBlue CEO Robin Hayes said his airline has been successful in New York and Boston but can’t grow much more against Delta and United because of hurdles such as the difficulty of getting more flight times at the region’s crowded airports.

“These obstacles to growth led us to an unlikely alliance with American Airlines which, even as the world’s largest carrier, also has not been able to compete with Delta and United’s dominance in the Northeast,” Hayes said.

American and JetBlue announced their deal last year and have already started to coordinate their flights in the Northeast. They argue that it is a pro-consumer arrangement that has already helped them add several dozen new routes and challenge Delta Air Lines and United Airlines in the region.

The lawsuit comes two months after President Joe Biden issued an executive order calling on government agencies to help consumers by increasing competition in the airline industry and other parts of the economy.

The agreement was approved with certain conditions by the Transportation Department in the final days of the Trump administration. However, antitrust lawyers at the Justice Department began examining the deal more closely this spring and requested interviews and documents from the airlines, according to an airline lawyer involved in the case.

In the last three weeks it became apparent that the Justice Department was likely to file a lawsuit, said the attorney, who spoke on condition of anonymity because discussions with the regulators were private.

The airlines call their partnership the Northeast Alliance or NEA. It lets American and JetBlue sell seats on each other’s flights and give customers reciprocal benefits in the separate frequent-flyer programs.

American and JetBlue argue that the deal is pro-consumer by making their combination a stronger competitor in the Northeast. Together, the airlines say, they controlled 16% of the region’s air-travel market before the partnership, and that has grown to 24%.

The airlines argue that the Justice Department has no evidence that their agreement is leading to higher fares. Air-travel prices have been hurt by the pandemic, which continues to cut into travel demand and push fares lower.

American and JetBlue argue that nothing in their deal controls pricing, and that each airline will continue to set its own fares.

Southwest Airlines and Spirit Airlines filed formal complaints against the American-JetBlue alliance, however, arguing that — along with a similar deal on the West Coast between American and Alaska Airlines — it will make American too big.

Spirit said the Transportation Department didn’t listen enough to the public before approving the deal, although the agency did require American and JetBlue to make concessions including the surrender of some takeoff and landing slots at John F. Kennedy International Airport in New York and Washington Reagan National Airport outside Washington. Spirit and Southwest asked for more concessions.

The Justice Department lawsuit was filed in federal district court in Massachusetts. The department was joined by the attorneys general of California, Massachusetts, Florida, Pennsylvania, Virginia, Arizona and the District of Columbia.