FILE PHOTO: In this Nov. 4, 2020, file photo, Chester County, Pa. workers transport mail-in and absentee ballots to be processed at West Chester University in West Chester. A surge of absentee ballots during last year's election led to concerns that a larger percentage of mailed ballots could be rejected for arriving past the deadline, not having a voter's signature or some other reason. An analysis by The Associated Press shows that didn't happen. 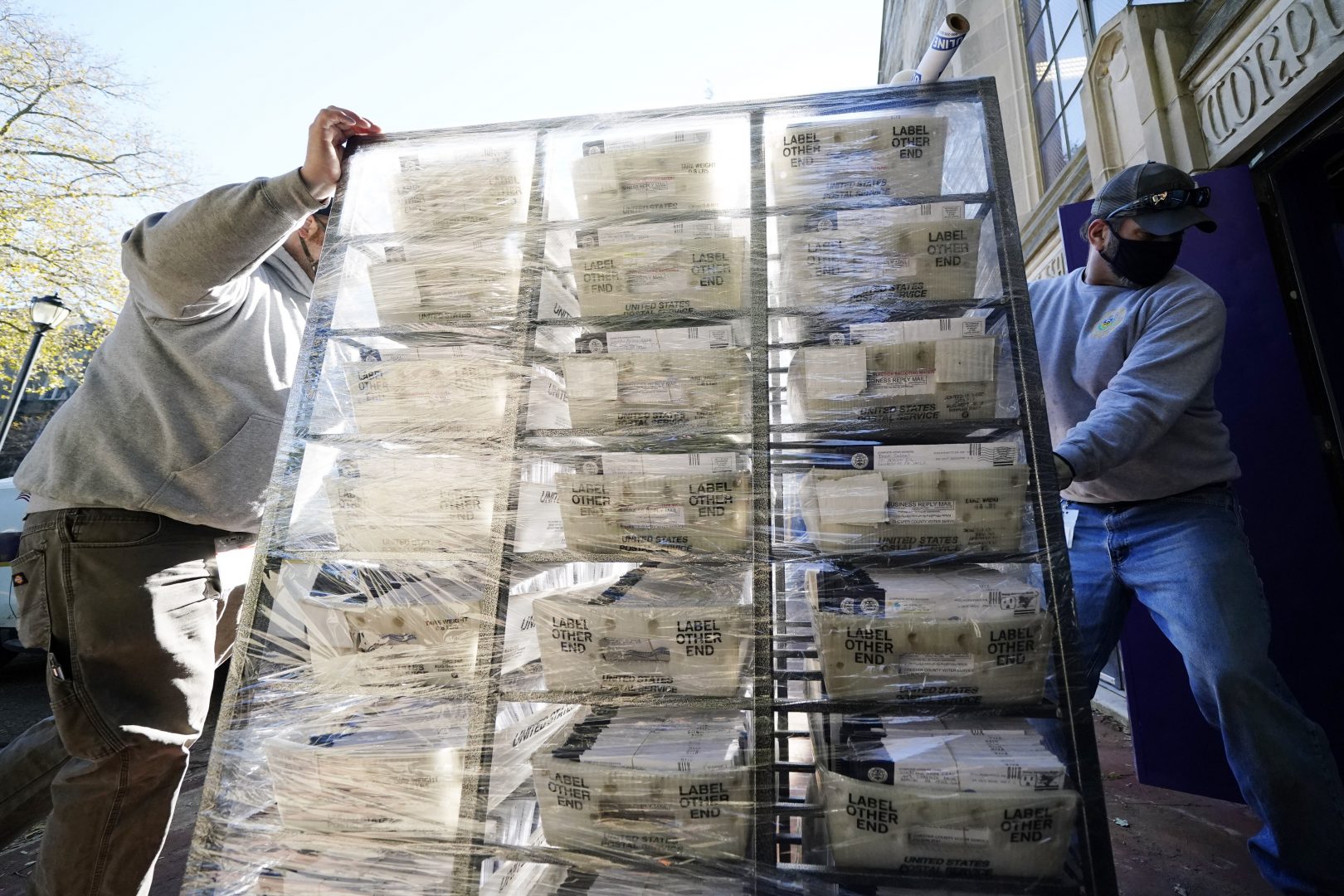 FILE PHOTO: In this Nov. 4, 2020, file photo, Chester County, Pa. workers transport mail-in and absentee ballots to be processed at West Chester University in West Chester. A surge of absentee ballots during last year's election led to concerns that a larger percentage of mailed ballots could be rejected for arriving past the deadline, not having a voter's signature or some other reason. An analysis by The Associated Press shows that didn't happen.

As Pennsylvania Republicans have taken steps toward an unprecedented review of the 2020 presidential election and 2021 primary, election and data security experts say their methods — and the clear partisan motivation behind them — are concerning.

A little-used Senate committee controlled by Republicans voted this week to issue a subpoena ordering Pennsylvania’s Department of State to deliver a long list of voter data and other records.

It includes a mix of publicly available and private information: specifically, all registered Pennsylvania voters’ names, dates of birth, and addresses, as well as the last four digits of their social security numbers, driver’s license numbers, and dates of their last voting activity.

Most of that information is already available to the public. State communication records are subject to Pennsylvania’s Right-to-Know law, and anyone can purchase a voter list that includes some information on individual voters for $20 from the DOS. That list does not include a person’s actual voting record, nor is that a request of GOP lawmakers.

But lawmakers are requesting social security digits and driver’s license numbers, which aren’t public. Alex Halderman, a University of Michigan professor who studies computer security and privacy in election systems, says there is good reason why that information usually stays behind a firewall.

David Becker, who heads the nonprofit Center for Election Innovation & Research, which consults with states on election integrity, was blunter in his assessment of the GOP proposal.

Jason Thompson, the spokesman for Senate President Pro Tempore Jake Corman (R-Centre), explained the caucus’ justification for the review as having heard “anecdotally” that DOS’ election rolls might have problems, and so they’re figuring out “if there are concerns, to what extent those concerns are valid.”

DOS is responsible for maintaining voter rolls, which often involves getting rid of duplicate registrations when people move within the commonwealth, and getting inactive and deceased voters off the lists. It’s a big job — one that Becker knows intimately.

He previously directed the Pew Charitable Trusts’ election research, and led the development of the Electronic Registration Information Center, or ERIC, a system that has helped many states — including Pennsylvania — clean up its rolls.

“Pennsylvania has been one of the leaders in this,” he said. “Pennsylvania’s voter rolls in 2020 were significantly more accurate than they could have been in 2016, thanks to their membership in ERIC.”

Senate Republicans have said they’ll need to hire a private company to actually conduct their review. They’ve confirmed that state money will fund the project, but haven’t said what companies they’re looking at, or what criteria they’ll use to determine who to trust with the personal information of Pennsylvania’s 8.7 million registered voters.

“I think that we would be building specific language into whatever contract we would sign with a vendor … for one we would certainly have some kind of nondisclosure agreement so that information would be protected under penalty of law,” he said. “And also, you know, just making sure that there are certain security and storage protocols in place.”

But Thompson also acknowledged, there aren’t many companies around that are equipped to do the kind of unusual review his caucus is looking for: cross-checking millions of people’s voting records with death records and hunting for names that might be wrongly registered or duplicated.

“One of the things that we’re running into is there’s not a lot of firms that have that specific experience,” he said. “Most of the audits that are done are usually performed by counties, they’re performed by departments of state.”

“Senate Republicans should be ashamed of their latest attempt to destabilize our election system through a sham investigation that will unnecessarily cost taxpayers millions of dollars,” his office wrote this week.

Pennsylvania has already performed two post-2020 reviews — in one, counties all audited 2% of their votes, as required by state law. The state also performed a risk-limiting audit in nearly every county. Both audits confirmed the results of the election, which President Joe Biden won by more than 80,000 votes.

Halderman noted, he’s not against more robust audits in Pennsylvania and other states. He thinks risk-limiting audits are a particularly good idea: They involve states re-tallying a random portion of paper ballots in each county — a process that’s easy to keep secure and transparent.

But the one the commonwealth performed in 2020 was a pilot that was kept from being truly thorough because four Republican-strong counties — Lancaster, Greene, Franklin, and Beaver — declined to participate.

He said if the legislature really wants to make voting more secure, they don’t need to perform an ad hoc fishing expedition with voters’ personal information months after the election in question. Instead, it could pass a law to require all counties to participate in DOS’s risk-limiting audits going forward.

“With any kind of audit, you have to agree in advance that you’re going to do an audit and how it’s going to be conducted in order to prevent it from becoming political gamesmanship by people who just don’t like the election result,” he said. “I’m afraid that a lot of what we’ve been seeing across the country.”

Republicans in Pennsylvania — as in Wisconsin, Arizona, Michigan, Nevada, and several other states performing or considering post-hoc “audits” — haven’t cited or produced any evidence of systemic fraud.

Their reasoning for reviewing the election — as Thomson said, anecdotal complaints about election rolls — seems to lead in an eternal circle, Halderman said.

Voter rolls are never perfect. Halderman has no doubt that whatever company Republicans choose might find some duplicate names, or someone who has died, but isn’t yet cleared from the rolls.

But there are limits to the conclusions that can be drawn from that data, he said — not to mention that it’ll probably be incomplete. Most states didn’t begin keeping driver’s license and Social Security numbers in voting files until the Help America Vote Act of 2002. Voters who registered before that may not have those pieces of information in their files.

“It’s one of the risks of doing this kind of audit without the close involvement of election officials,” he said. “There may be aspects or quirks to the way the data is recorded and maintained that look like errors to someone from the outside, but actually have a very simple explanation.”

This, he said, “is not a real investigation. This is just an effort to continue the lies, to continue the attacks on American democracy, and to fill the needs of the losing candidate.”

‘People are just never going to be convinced’

Democrats in the Senate are preparing a lawsuit that they say will claim the GOP subpoenas “violate federal law and invade the privacy of each and every Pennsylvania voter.” Attorney General Josh Shapiro — a likely 2022 candidate for governor — has also said he plans to fight the subpoenas.

State Sen. Anthony Williams (D-Philadelphia), the top-ranking Democrat on the GOP-controlled Senate Intergovernmental Operations Committee that issued the subpoenas, said he fully expects the voter information won’t ever make it back to the Republicans.

In his opinion, the legislature’s entire, monthslong argument over election security has been a waste of time.

“I hope that more Pennsylvanians understand that those that supposedly represent them, [people] who believe in smaller government, privacy, et cetera, they’re being betrayed,” he said. “Because the politics of the moment are driven by Donald Trump.”

Some Republicans, like Corman, have said they aim to use this stab at an election review to come up with legislative changes to the election process, then move on to other issues.

Our goal, state senators wrote on a new FAQ website, is to “create a fair, transparent process everyone can believe in.”

But Halderman, who is watching these processes unfold in nearly a dozen states, says now that mainstream Republican politicians have spent so many months taking election fraud claims seriously, he’s not sure it will be so easy to put them to rest if, as he expects, they don’t find any real problems.

“There has been no credible evidence produced whatsoever that the presidential outcome was altered by fraud,” he said. “Continuing to look for that evidence, well, maybe that’s going to be necessary to finally convince some people who are still skeptical after all this time that the result is real.”

“But I worry,” he said, “that those people are just never going to be convinced.”