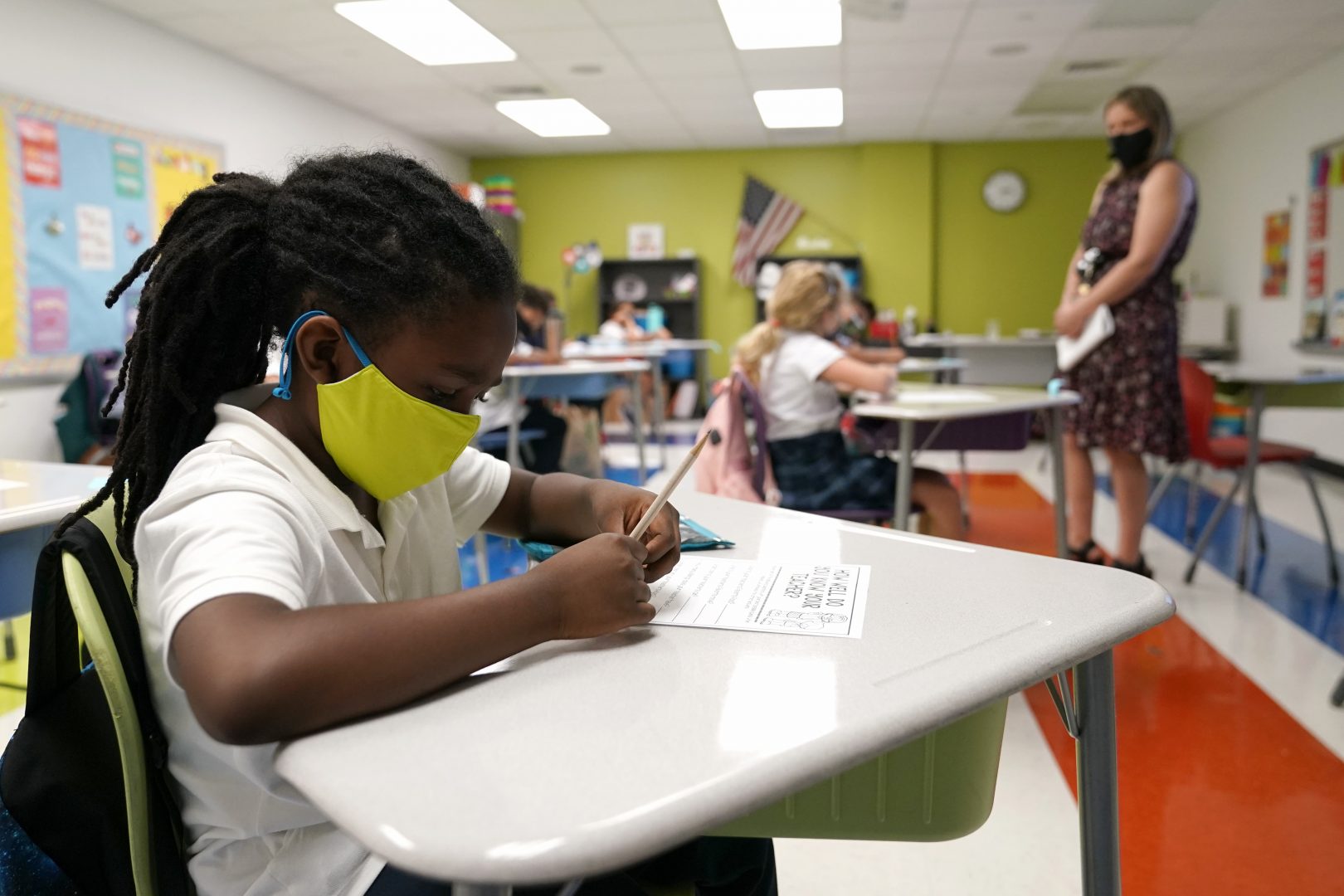 (Harrisburg) — School districts across Pennsylvania are preparing to enforce a masking order handed down by Secretary of Health Dr. Alison Beam.

Beam, at the direction of Gov. Tom Wolf, issued the order to K-12 schools and child care centers earlier this week — aiming to curb the spread of COVID-19 amid a more than 300 percent rise in new cases. His administration previously rejected calls to impose one earlier this summer.

“The reality we are living in now is much different than it was just a month ago,” Beam said at a news conference Tuesday. “The science is clear: if we want to keep our schools open, maintain classroom learning and allow sports and other activities to continue, masking significantly increases our chances of doing so.”

The Centers for Disease Control and Prevention has said COVID-19 is spread through tiny droplets in the air called aerosols. Studies conducted by the agency show wearing a cloth or surgical mask blocks a substantial number of those droplets. Researchers add masking works best if everyone in a given area wears one.

Republican state lawmakers, echoing the protests of parent and activist groups that have begged school districts across the state to nix mandatory masking, said they plan to explore ways to challenge the order. That’s despite support for the plan from a number of county health departments, hospitals, and education associations.

“As we review the specifics of this mandate, all options remain on the table. We will continue to exercise the voice of the people in seeking local control in these decisions,” House Republican Majority Leader Kerry Benninghoff said in a statement.

But according to an attorney who’s been fielding pandemic-related legal inquiries, both groups face an uphill legal battle because of how Beam’s order was handed down. 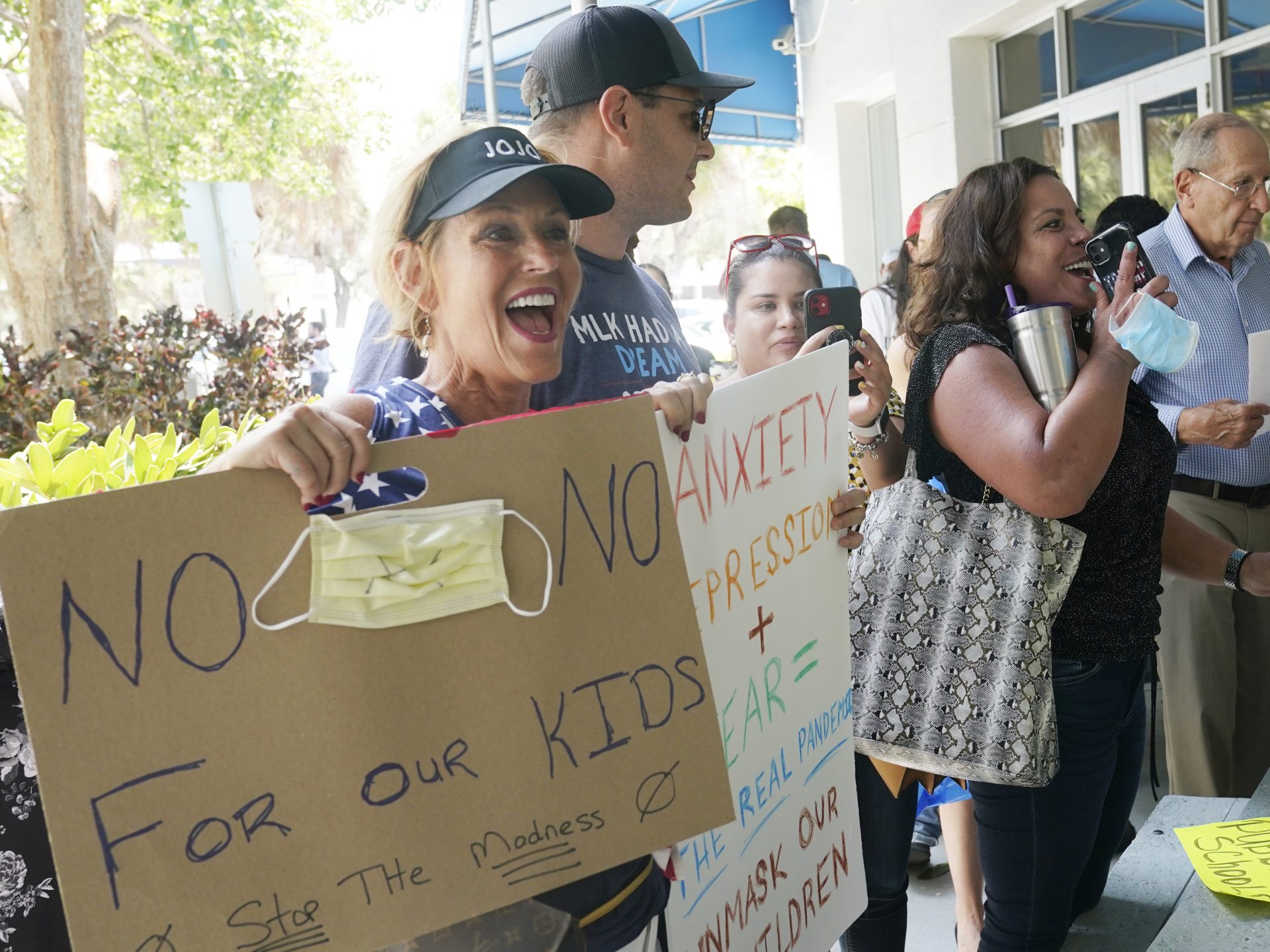 Joann Marcus of Fort Lauderdale, left, cheers as she listens to the Broward School Board’s emergency meeting, Wednesday, July 28, 2021, in Fort Lauderdale, Fla. A small but vocal group spoke vehemently against masks, saying their personal rights were being eroded and their children were suffering socially.

A few state constitutional changes that voters approved in the spring limited Wolf’s ability to take sweeping emergency action against the coronavirus, like requiring masks at businesses. But the latest school masking order technically didn’t come from Wolf himself and wasn’t issued under an emergency declaration.

Instead, the administration is channeling that order through the decades-old Disease Prevention and Control Law.

“This is the same authority that the FDA, the CDC, and the Department of Health in Pennsylvania use to respond to outbreaks of food contamination like E. coli,” Attorney Kevin Levy of Philadelphia law firm Saul Ewing Arnstein & Lehr said.

He said it would be tough for opponents to convince a state court judge that such an order is harmful because judges tend to leave disease control decisions in the hands of experts.

“We call it deference,” Levy said. “So a court will give deference to the Department of Health to determine what constitutes an appropriate control measure.

“That deference isn’t absolute,” he continued. “[But] even though it does virtually apply to everyone in a school setting and the…time limit of this order is still undefined, this is much more likely to be determined to be an appropriate control measure.”

Levy didn’t rule out opponents suing over the order in federal court. Last fall, they convinced a judge in Pittsburgh to rule Wolf’s pandemic-era restrictions unconstitutional. But a federal appeals court later threw out that same suit.

In the face of those odds, state Sen. Judy Ward (R-Blair) is among those taking a different tack: she’s calling for a state constitution change to limit how the health secretary could use disease control power. But that process could take years.

School districts, meanwhile, will have to start enforcing the statewide order in their schools starting Sept. 7.

Pennsylvania Association of School Administrators Executive Director Mark DiRocco said while some superintendents he’s spoken with would have preferred to go their own way on masks, they all want the same thing.

“They want their kids in school,” he said. “I believe that’s what the Department of Health was trying to accomplish with this mandate.”

School board meetings in some districts have had a charged atmosphere of late, as some community members are venting their frustrations over mask requirements, and others over why people are fighting them. In one instance last month, police were called to a meeting at Penndale Middle School in Lansdale.

But DiRocco said school superintendents and school boards are required by law to uphold statewide orders. While he acknowledged it’s hard to know how effective school administrators will be at enforcing the masking requirement among school kids and teachers, many already had plans in place when masking was required last spring.

“They would use those same enforcement procedures for this, so I really don’t see that as anything new or different for districts,” DiRocco said. “School leaders are going to have to abide by [the masking order] and put it in place.”

Pa. to refund $19 million to 109,000 people it overcharged in unemployment benefit error