Nearly 64% of Pennsylvania adults are fully vaccinated, a small increase compared to July 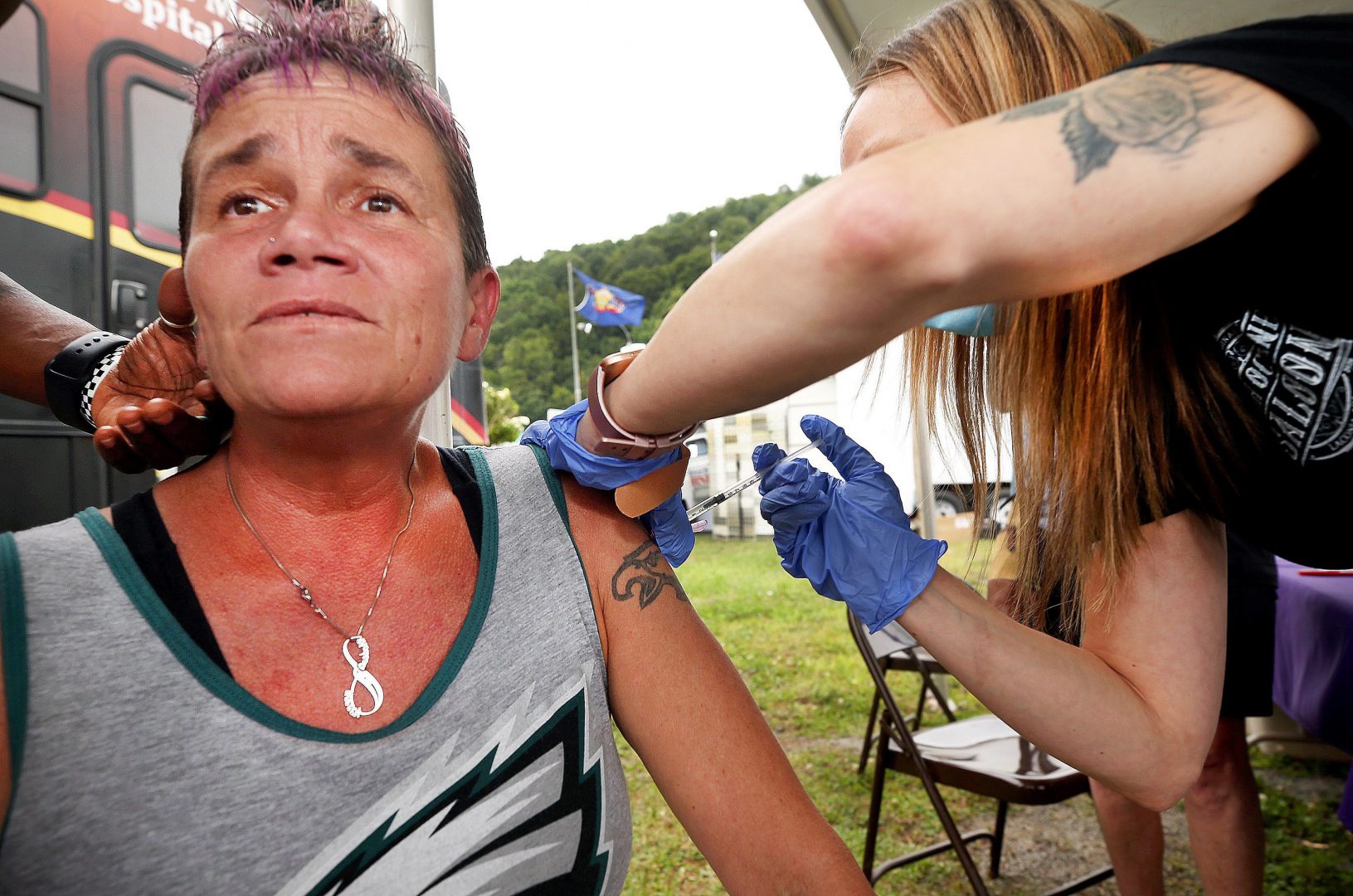 Instead, the registered nurse was on hand as part of an effort to make it as easy as possible to get vaccinated — a goal that’s become even more critical as new cases of COVID-19 creep up in Pennsylvania.

“It’s right here, they know it’s free, let’s just do it and get it done with,” said Diehl, a 21-year veteran of the Wayne Memorial Health System, which is organizing the clinics. “I do believe convenience plays a big part in it.”

In the first three days of the fair, 58 people agreed to be vaccinated. Several were preparing to travel or participate in gatherings like weddings, Diehl said, while many others were fair workers who will move on to jobs in other places.

As of Aug. 9, nearly 64% of Pennsylvania adults were fully vaccinated. That’s a small increase compared to the previous month and a worrying plateau as the delta variant surges across the country.

To motivate unvaccinated people to get a shot, state officials, health systems, and community groups are sending text messages, making house calls, and setting up clinics in convenient places, including several county fairs.

The state Department of Health recently launched a text message program to remind those who received their first dose between Dec. 14 and May 14, but who did not return for a second shot, to complete their vaccination. The first round of messages was sent to 254,850 people.

Nearly all of the state’s recent deaths and hospitalizations have been among people who are not vaccinated, Acting Health Secretary Alison Beam said in late July.

“If we can move the needle there, that, of course, tamps down case counts, hospitalizations, and prevents deaths,” Beam said. “At this stage, these deaths are preventable.”

Experts told Spotlight PA it’s not surprising that vaccination rates have slowed over the summer. Those who were sure about their decision to get vaccinated eagerly lined up in the spring.

Still, state and local officials are worried that stagnating rates could lead to another fall surge, especially among vulnerable populations like children under 12 who aren’t eligible to be vaccinated, people with underlying health conditions who can’t get a shot, and the elderly.

In the winter, Pennsylvania faced a sluggish vaccine rollout. Supply was drastically outpaced by demand, and a decentralized, mostly internet-based web of appointment registration sites made competing for a slot stressful and complicated. Now, misinformation and distrust of government are making the task of convincing the unvaccinated to get a shot even harder.

“I think the answer is public education,” said Paul Heimel, a commissioner in Potter County, where vaccination rates are among the lowest in the state.

In Heimel’s north-central county, which has a population of 16,526, the share of vaccinated residents has hovered near or at 30% since late May. It’s one of about a dozen rural counties that has reported consistently stagnant vaccination rates since eligibility expanded in April.

Transportation to vaccine sites was a problem in the rural county early on, Heimel said. Currently, vaccine hesitancy fueled by misinformation is the biggest issue keeping people from getting a shot.

“We’re not going to stop,” Heimel said. “There’s science behind it, and it’s in the best public interest.”

In recent months, the state Department of Health has worked with health systems and county officials to set up mass vaccination sites throughout the state, along with small, community-based clinics — with mixed success.

The state targeted rural counties with little health-care infrastructure and many elderly residents with mass vaccination clinics that saw high turnout. All 500 appointments at a February clinic in Sullivan County were booked the week before an advertisement ran in the local paper, and all of them were filled the weekend of the clinic.

Potter County officials partnered with the state health department to hold small vaccine clinics in remote parts of the county, but the turnout was “underwhelming, disappointing,” Heimel, the commissioner, said.

The state awarded Latino Connection, a Harrisburg-based communications agency, a $1.8 million grant this spring to run day-long, mobile clinics across Pennsylvania in an effort to help close the stark racial disparity in vaccinations.

About 71.3% of people statewide who have received at least one dose of a vaccine are white, while 5.1% are Black and 5% are Hispanic. In May, about 73% of people who met the same criteria were white, 4% were Black, and 4% were Hispanic.

Race and ethnicity information for about 10% of vaccinated people in Pennsylvania is still unknown, state data show, and there are concerns the numbers may be inaccurate for Asian residents.

With money awarded by the state, the United Way is currently managing $4 million in grants to support organizations doing vaccine education and outreach.

So far, groups in Allentown, Erie, Harrisburg, and Pittsburgh have received funding for vaccine education and events through the program. Applications are pending for groups in the majority-Hispanic city of Reading, as well as in rural Forest and Venango Counties, United Way of Pennsylvania President Kristen Rotz said.

Many of the events are aimed at reaching children 12 and older, the youngest population eligible to receive the vaccine, and people in rural areas, Rotz said. Most events are small, with a goal of vaccinating 50 to 100 people, compared to the mass vaccination events that were more common in the spring. 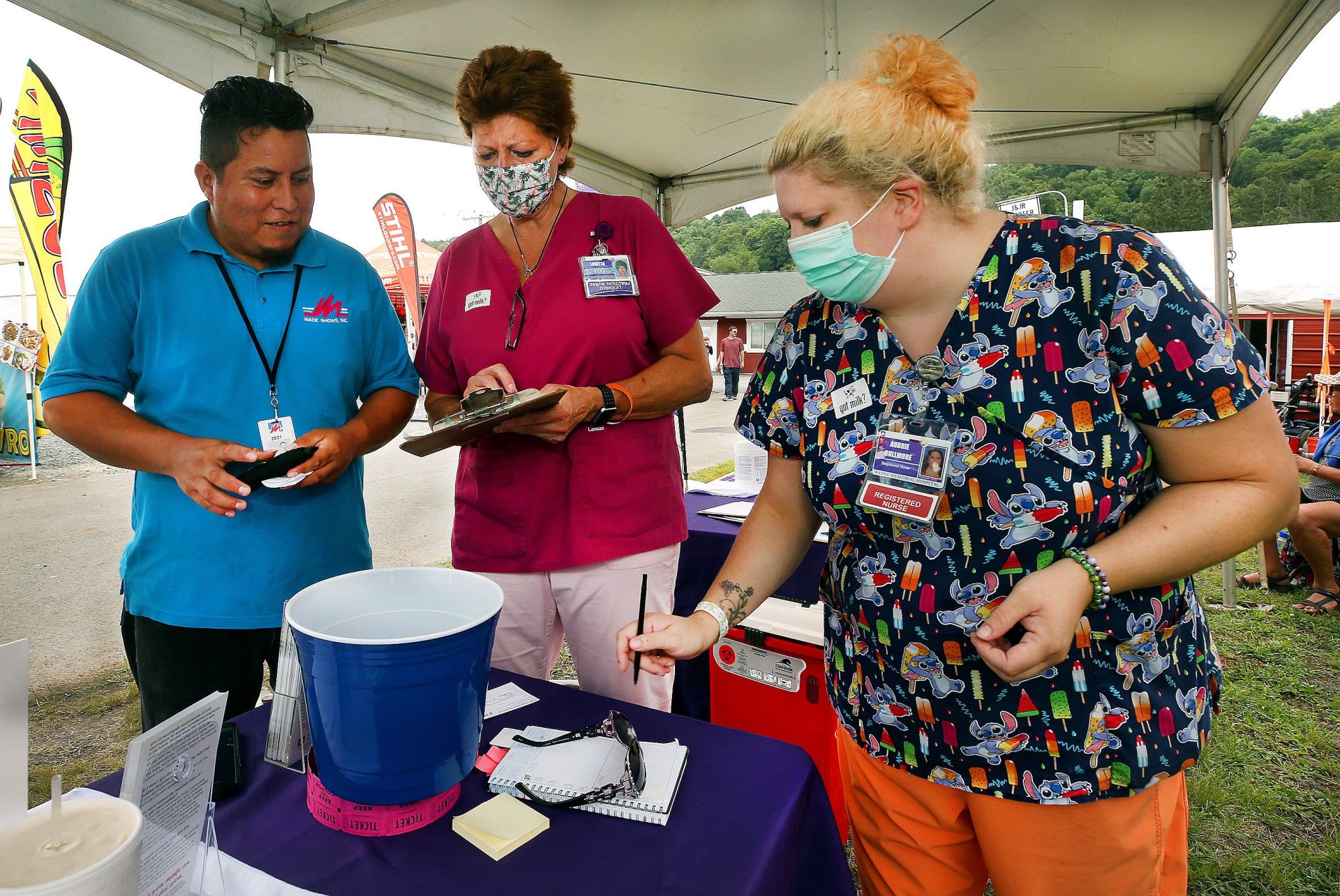 Luis Angel Guzman, a 19-year-old carnival ride worker from Mexico, talks with Wayne Memorial Community Health Center nurses at the Wayne County Fair before he got the Johnson & Johnson vaccine.

Our West Bayfront — a community organization in the city of Erie that provides housing resources, hosts community events, and supports local businesses — is among those receiving funding for education and small pop-up events in parks and residential areas.

The group’s service area has one of the lowest shares of vaccinated residents in Erie County, at about 36%, local data show. The goal is to bring vaccines to those neighborhoods to make getting a shot easy and convenient for people living there, Executive Director Anna Frantz said.

In addition to sharing informational flyers and launching paid social media advertisements, Frantz, two staff members, and a cohort of nearly a dozen volunteers knock on doors to personally talk to people about getting a vaccine.

The group has seen some success. Previous clinics held in a local park and scheduled to coincide with a summer recreation series attracted younger adults and those motivated by the convenience of getting a vaccine in their neighborhood.

But turnout is still low, even as the group tries to reach people personally or bring vaccines to their doorstep. Only four people received a vaccine during a recent National Night Out event, which was attended by about 1,000 people, Frantz said.

“I was not expecting how difficult it would be given what a slog we’ve been through,” she said.

“The issues left are vaccine hesitancy, or they don’t feel there’s a strong enough need to jump through the hoops they would need to to get the vaccine,” said Dr. Wendy King, an epidemiologist at the University of Pittsburgh Graduate School of Public Health who is studying vaccine hesitancy.

Her research, which includes a nationwide survey of more than 5 million respondents, suggests that while vaccine hesitancy as a whole is decreasing, there’s still a consistent group of people who say they will “definitely not” get a vaccine, King said.

Many of those people said they didn’t trust the government or the vaccine, King said, making public health interventions or education efforts challenging.

“It’s a little more difficult because it’s not exactly scientifically based,” she said.

Local officials across Pennsylvania are seeing that type of distrust of government and public health sources, and much of it is driven by misinformation about vaccines, said Kevin Boozel, president of the County Commissioners Association of Pennsylvania and a commissioner in Butler County.

Boozel said it’s going to take people who aren’t “politicized,” like teachers, coaches, or faith leaders, to convince people who have not yet been reached.

“I think that there’s still a political stigma around vaccines,” he said. “The reality is, the messaging can’t come from political leadership.”

Victims write in to remind a judge: The opioid epidemic is measured in human lives