In this Sept. 2, 2020, file photo, a shopper walks by one of several vacant retail spaces among the outlet shops in Freeport, Maine.

To encourage people to return to work, more states — including Pennsylvania — are making it harder for people to stay on unemployment. 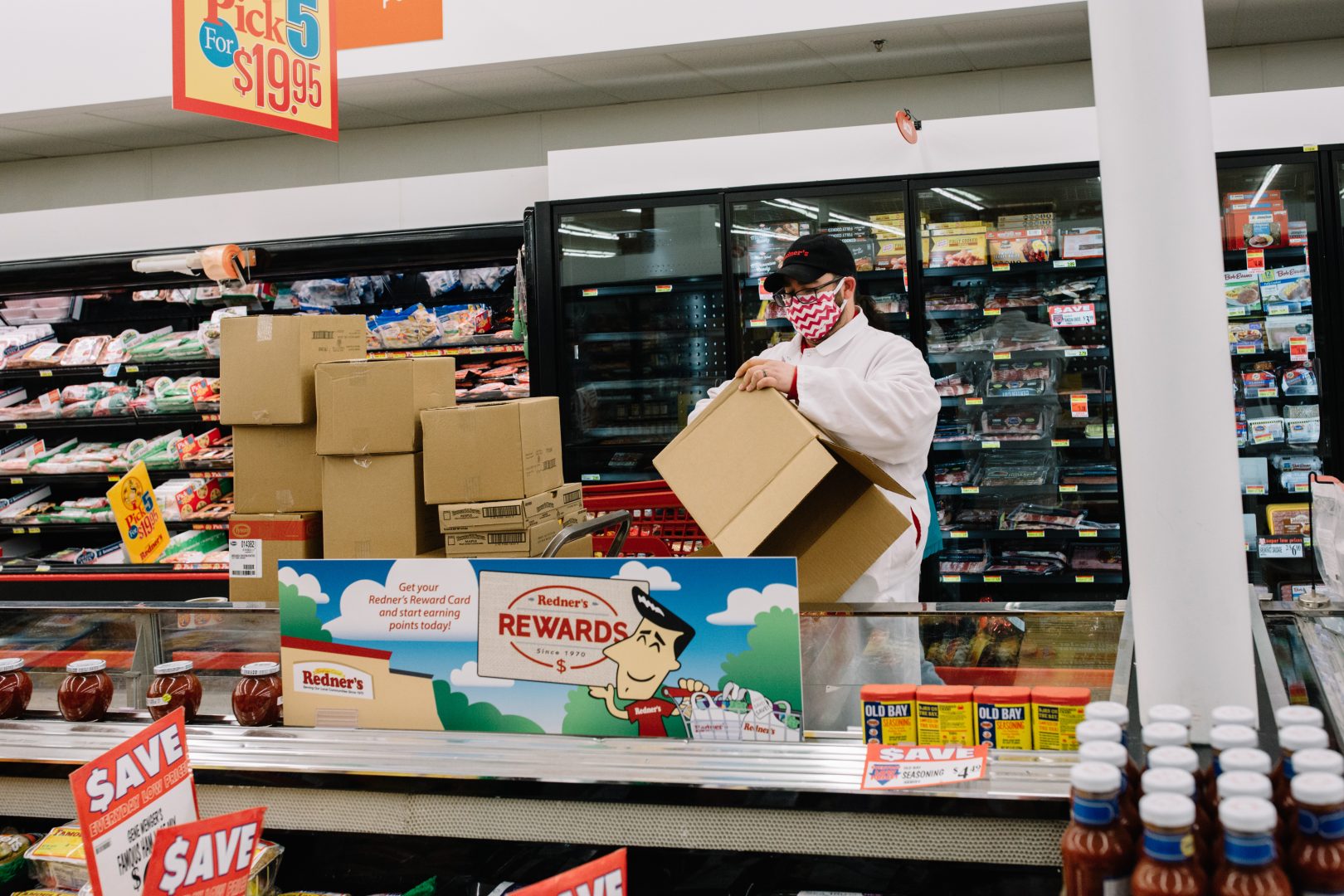 In this Sept. 2, 2020, file photo, a shopper walks by one of several vacant retail spaces among the outlet shops in Freeport, Maine.

(Stowe, Vt.) — Eduardo Rovetto is hoping the state of Vermont’s reinstated requirement that people who are collecting unemployment benefits must seek work to qualify will help him hire enough staff for his restaurant in the resort town of Stowe.

After more than a year of coronavirus restrictions on his business, Piecasso Pizzeria & Lounge, he’s expecting a breakout summer tourism season. But like employers across the country, he’s worried he won’t have enough workers.

“We’ve been getting many excuses as to why not to return,” said Rovetto, who is offering a signing bonus of up to $600 to try to add 15 to 20 employees who agree to stay through the middle of October. “Obviously, it was a legitimate one with COVID, but, you know, I think that’s getting used less and less now. The vaccines are free; they are out there for anyone.”

Many employers are telling similar stories. Fourteen months after COVID-19 put hundreds of thousands of people out of work, the U.S. economy is rebounding and employers are desperate for workers.

The challenge was highlighted Friday when employers nationwide added 266,000 jobs, far fewer than expected, and businesses reported they couldn’t find people to fill the openings they have to keep up with the rapidly strengthening economic rebound. 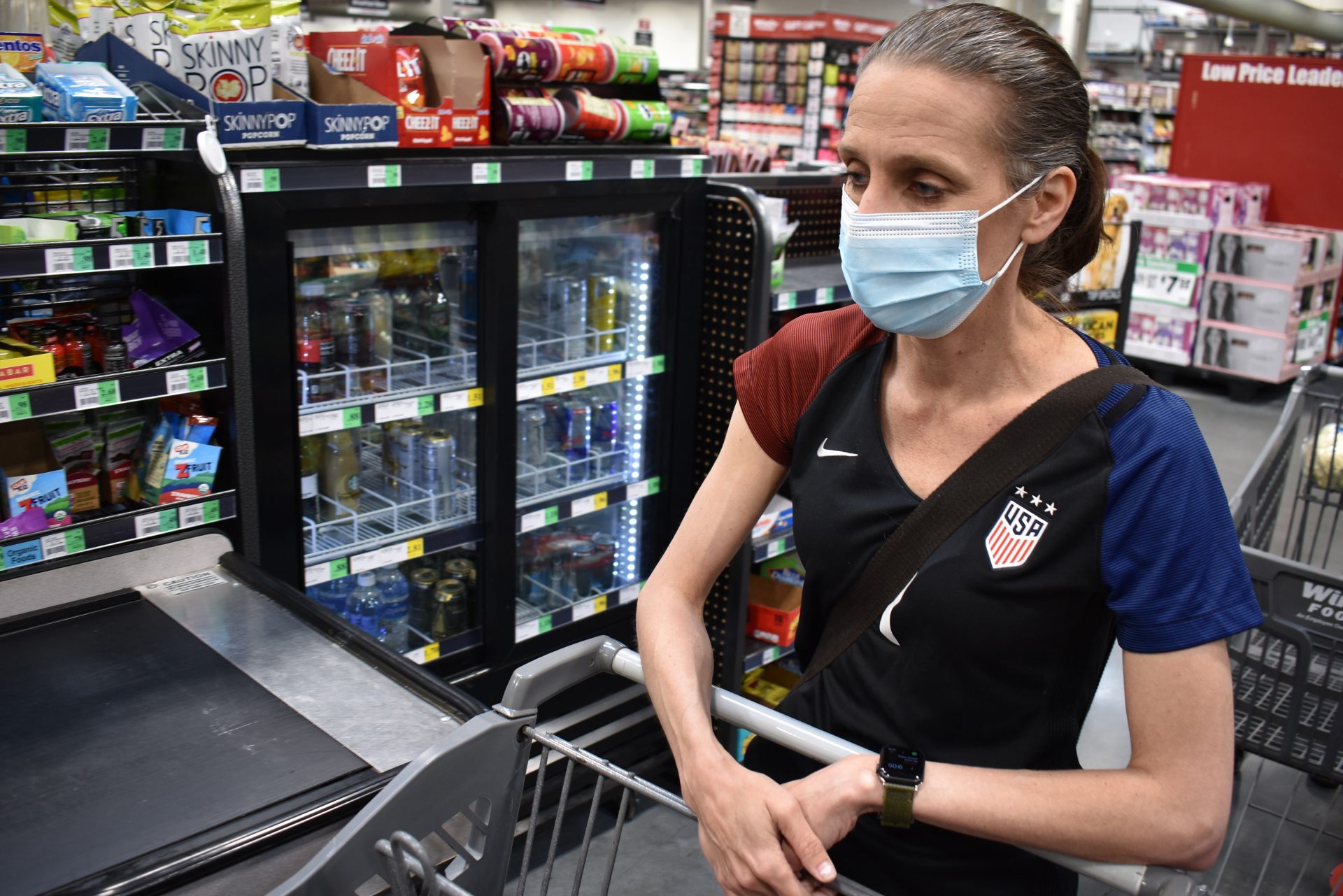 To encourage people to return to work, more states are making it harder for people to stay on unemployment. Many blame the easy benefits that followed the pandemic, including what is now a $300-a-week supplemental federal payment on top of state benefits. The argument is that people make more money staying home than going back to work.

Several states have begun requiring those receiving unemployment benefits to show they are actively searching for work, and a few will stop providing the additional federal supplement.

It’s not just the hospitality sector that is scrambling to fill positions. Alene Candles, based in Milford, New Hampshire, is looking to fill 1,500 positions for its facility there and another in New Albany, Ohio, to meet demand for the holiday season. Company representatives will be participating in a number of virtual job fairs this month.

“We have had more than 100 positions open since the start of the year, and just recently we increased sign-on bonuses to $1,200 for hourly positions -– in-part because we are competing with an entity that can print its own money -– the federal government -– and its $300 per week additional unemployment benefit,” said CEO Rod Harl. “I would love to welcome those searching for work to join our team.”

On Monday, the state of New Hampshire reopened its job centers for the first time since the pandemic hit to help people looking for work, but only a handful showed up in the first few hours at the largest one in Manchester.

Labor experts say the shortage is not just about the $300 payment. Some unemployed people also have been reluctant to look for work because they fear catching the virus. Others have found new occupations rather than return to their old jobs. And many women, especially working mothers, have had to leave the workforce to care for children.

The details and the timing of the state-led efforts to get people back to work differ, but they are coming from states led by both Republicans and Democrats.

“As President Reagan said, the best social program is a job,” Arizona Gov. Doug Ducey, a Republican, said when announcing the resumption of the work-search requirement. “This statement rings true today. Unemployment benefits are still available to Arizonans who need them, but now that plenty of jobs are available, those receiving the benefits should be actively looking for work.” 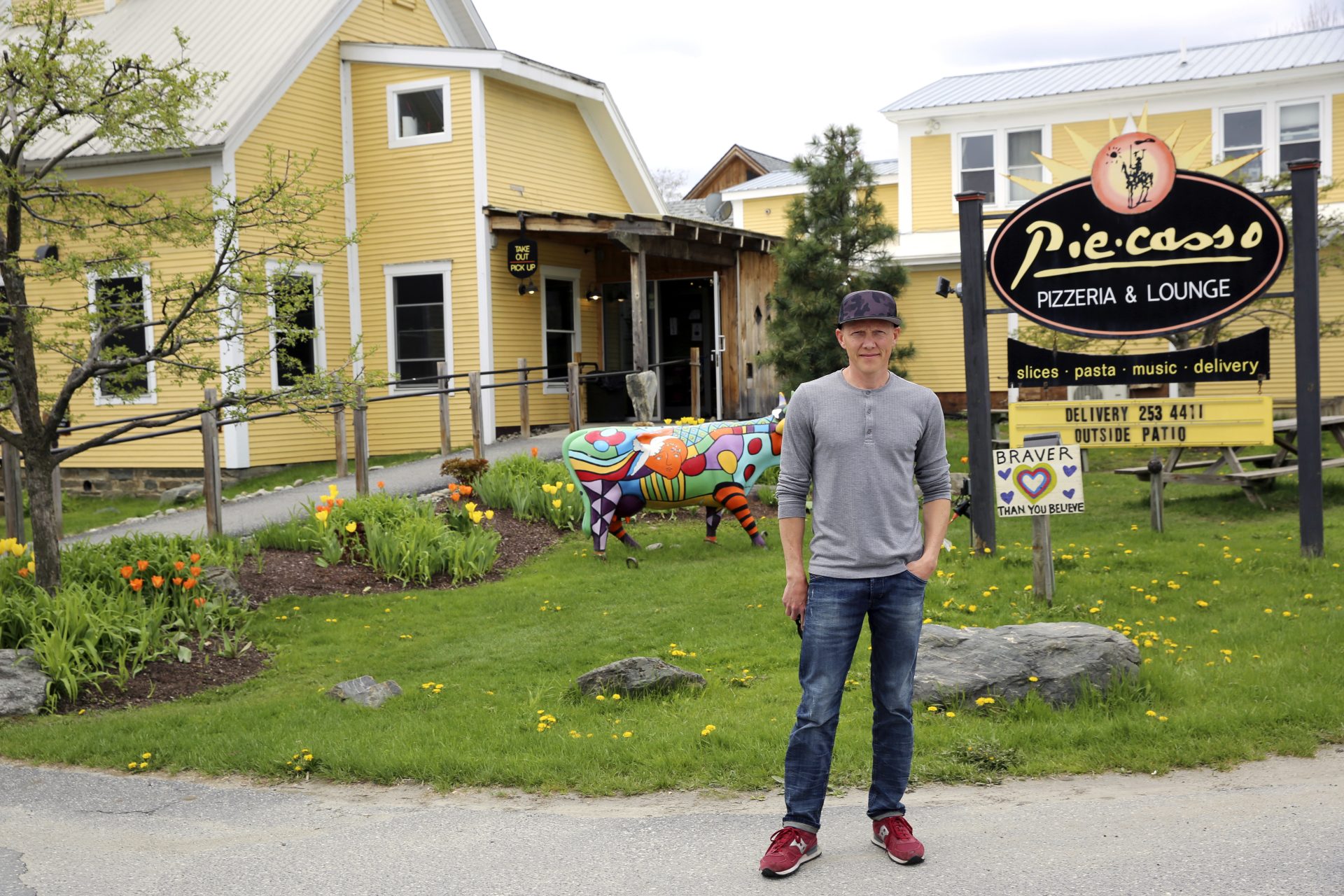 Eduardo Rovetto poses outside his restaurant Piecasso Pizzeria & Lounge in Stowe, Vt., on Saturday, May 8, 2021. Rovetto says he would like to hire between 15 and 20 workers before what is expected to be a busy summer tourist season, but he’s not getting enough interest.

Arkansas, Mississippi, Montana and South Carolina are planning to stop accepting the $300 benefit.

In announcing last week that unemployed workers will no longer receive the additional benefit beginning June 27, Montana Gov. Greg Gianforte, a Republican, said it was “doing more harm than good.”

Rachel Mata, an area manager for a Fayetteville, North Carolina-based staffing company, said it’s been increasingly difficult to find people for positions since the passage of the latest federal COVID-19 relief bill.

“We get candidates who will mention, ‘Hey, you know, why would I go to work when I get paid more on unemployment to sit at home?’” said Mata.

At a recent job fair, only one candidate showed up, said Mata, whose company, Mega Force Staffing Group Inc., mainly focuses on manufacturing jobs. In other cases, candidates have gone through the staffing company’s onboarding process, only to not show up on their start date.

In Myrtle Beach, South Carolina, the heart of the state’s $20 billion tourism industry, restaurants and resorts are scrambling for summer help. Angelo Verdone, an assistant general manager at Seaside Resorts, said hotels are so short-staffed that managers are working double duty, cleaning rooms and doing maintenance. He is working some front desk shifts.

Some applicants have responded to ads but failed to attend the interviews; others have gotten offers but did not show up to the job itself.

Though the company has offered a $500 sign-on bonus for its $11-an-hour housekeeping role, it got no takers.

“It’s not like they’re bad jobs,” Verdone said. “Most years, people are beating down the front door for the front desk jobs.”

William Spriggs, an economist at Howard University and the chief economist for the AFL-CIO, said the issue isn’t as simple as the unemployed being able to receive more benefits. He says the economy has changed.

He said he didn’t think the job-search requirement is bad, but it won’t solve the labor shortage. 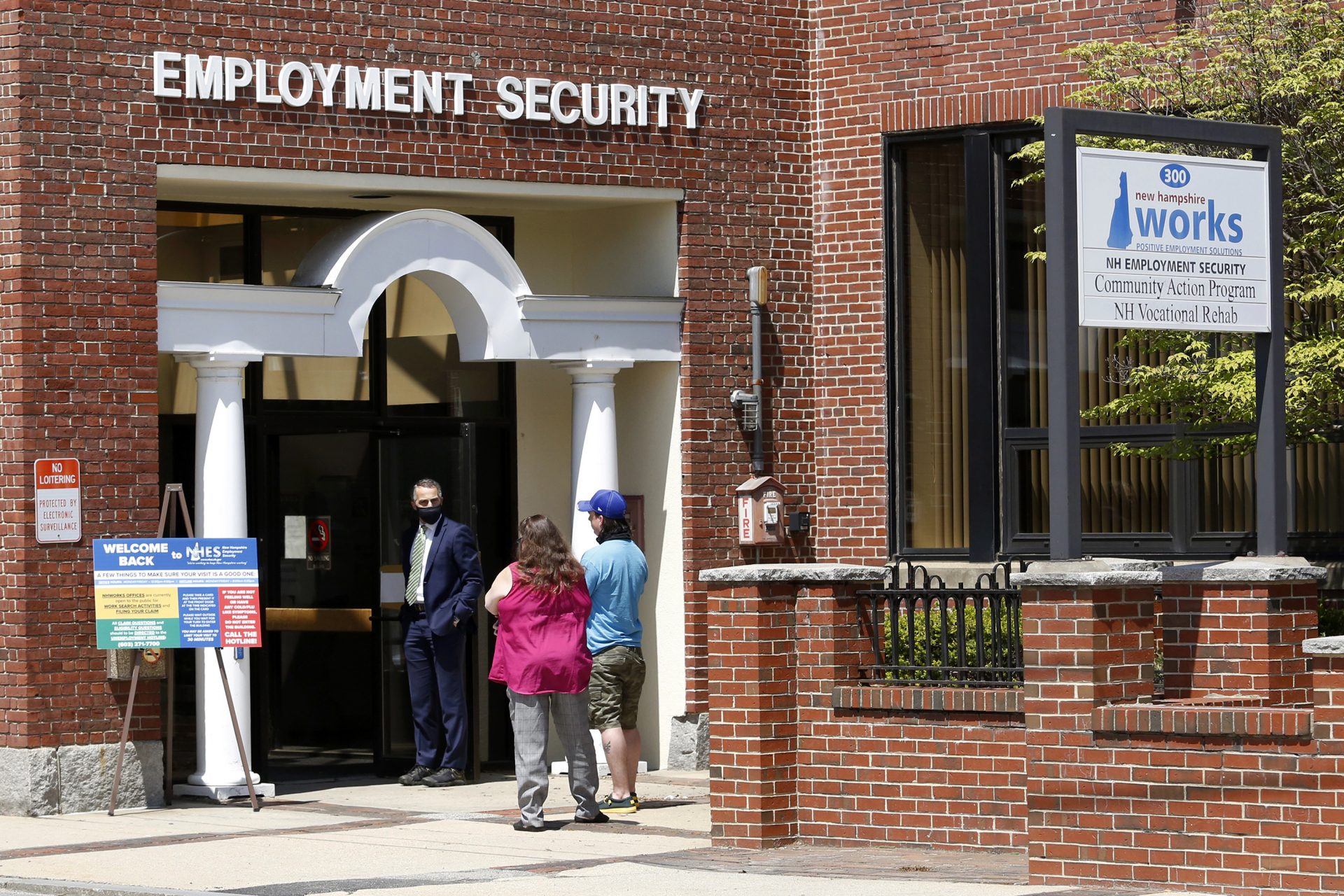 Job seekers line up outside the New Hampshire Works employment security job center, Monday, May 10, 2021, in Manchester, N.H. States are pushing the unemployed to get back to work to help businesses large and small find the workers they need to emerge from the COVID-19 recession. Now some states are reinstating a requirement that anyone who collects unemployment must look for work.

“Matching workers to employers isn’t as easy as people think, which is what some of these employers are finding out,” Spriggs said.

There might be a lot of jobs available, but in some cases they don’t fit for the unemployed with specialized work skills.

“I am a master technician with 30 years experience. You think I am going to go work in a pet store?” said Harry Chaikin, an out-of-work stagehand from Burlington, Vermont, who lost his job last year when the theater where he works stopped offering performances.

Chaikin says he is eager to return to work when theaters resume normal performances. He’s receiving unemployment, including the $300 supplemental benefit, but he’s still months behind in his rent.

“The sense of optimism I feel is that human nature being what it is, I know that sooner or later people are going to gather again in big groups to be entertained. And when that happens, I will have work,” he said.

And people are still losing their jobs.

Crystal Dvorak, 41, an audiologist in Billings, Montana, who has two teenage daughters, weathered a furlough early in the pandemic and had to dip deep into her savings. Last month, she found out she would lose her job when the clinic where she worked for nearly nine years had been sold.

When the governor announced the $300 supplemental benefit would end, it was Dvorak’s second day of unemployment.

The state plans to launch a new program to give one-time $1,200 bonuses to unemployed workers who return to work. Dvorak has begun applying for waitressing jobs, even though it could complicate her search for positions in her field.

“Knowing that change is coming, I’m having to be open to other positions,” she said. “I have shown interest in more jobs in the last week than I have applied for my entire 25 years of working.”