All Pennsylvania voters — including independents and minor-party members — will be asked to consider four ballot questions on May 18.

(Harrisburg) — All Pennsylvania voters — yes, that includes independents and minor-party members — will be asked to consider four ballot questions on May 18. Two of them are about as non-controversial as possible. The other two? A different story. Below, Spotlight PA breaks down the basics of what they would do, who is in favor, and who is opposed.

What would it do? This is a statewide referendum (as opposed to a constitutional amendment) that would allow municipal fire departments or companies with paid personnel, as well as EMS companies, to apply for a loan through an existing state-run program for volunteer companies. The money can be used to modernize or purchase equipment.

Who is in favor? The measure passed the legislature with unanimous support from Democrats and Republicans. The Pennsylvania Fire Emergency Services Institute is urging a “yes” vote, as is the Pennsylvania Career Fire Chiefs Association.

Who is opposed? Spotlight PA could not identify any opponents. 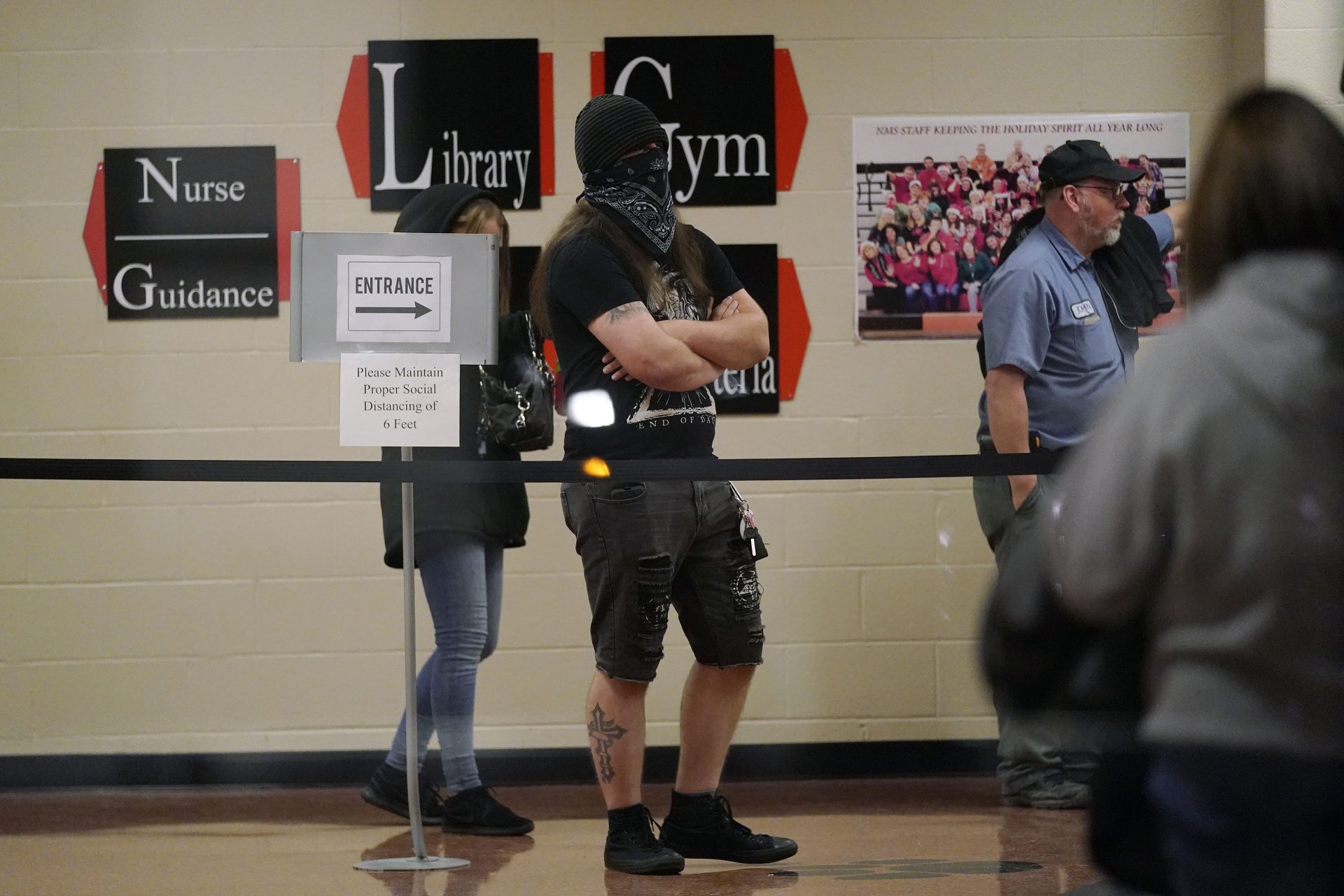 The final two people stand in line to vote after a long wait at a polling station at Northeastern Middle School, Tuesday, Nov. 3, 2020, in Mount Wolf, Pa.

What would it do? Currently, only Pennsylvania’s governor can end a disaster declaration, like the one the state is currently under to deal with the coronavirus pandemic. State law gives the General Assembly the option to pass a resolution to terminate the declaration, though the state Supreme Court ruled last year the governor still gets the final say. The legislature can overturn a governor’s veto with support from two-thirds of members.

This proposed constitutional amendment would allow a majority of lawmakers to terminate the declaration at any time, without the governor’s consent. What happens after that is the matter of some debate.

Who is in favor? This proposal, borne out of a contentious response to the Wolf administration’s approach to the pandemic, has been championed by the House and Senate Republican caucuses, with support from a few Democrats.

The Pennsylvania chapter of the conservative political group Americans for Prosperity has also launched a campaign to urge a “yes” vote on the question.

Who is opposed? Most Democrats including Gov. Tom Wolf are urging Pennsylvanians to vote “no,” as is the grassroots Democratic group Turn PA Blue.

What would it do? This question asks voters to amend the Pennsylvania Constitution to limit a disaster declaration to 21 days. It could only then be continued with the consent of the legislature.

Who is in favor? Who is opposed? The same parties as question 2.

What would it do? This proposal amends the Pennsylvania Constitution to enshrine discrimination protections to Pennsylvanians based on race and ethnicity.

Who is in favor? This amendment is supported by Democratic and Republican lawmakers. “Discrimination based on race is cooked into the DNA of this nation and we must take action to explicitly prohibit racial and ethnic discrimination in Pennsylvania’s Constitution,” said Sen. Vincent Hughes (D., Philadelphia), the amendment’s sponsor.

Who is opposed? Spotlight PA could not identify any opponents.