Shown is a sign outside a Rite-Aid pharmacy in Steelton, Pa., that is administering COVID-19 vaccinations, Friday, March 5, 2021.

The Wolf administration is pushing people to get inoculated as soon as possible, saying vaccines will be what end the pandemic.

(Harrisburg) — Pennsylvania is “winning” the race to contain a recent spike in COVID-19 cases and hospitalizations thanks to its accelerating vaccine rollout, the governor said Wednesday, as state officials sought to address what they view as the pandemic’s next big challenge — persuading stragglers to get the shot.

The Wolf administration is pushing people to get inoculated against the coronavirus as soon as possible, saying vaccines will be what end the pandemic, and has so far shown little appetite for new mitigation measures to address the latest surge in infections and hospitalizations.

“It’s a race between the vaccine and the upsurge, this fourth upsurge, and I think the vaccine is winning,” Gov. Tom Wolf said Wednesday outside Bethlehem Baptist Church in McKeesport, near Pittsburgh, which will host a community vaccine clinic operated by the Allegheny County Health Department.

Pennsylvania this week eased restrictions on bar seating, restaurant capacity and indoor and outdoor events, even though the state — along with New York, Michigan, Florida and New Jersey — accounted for nearly half of the nation’s reported infections over a recent seven-day reporting period. 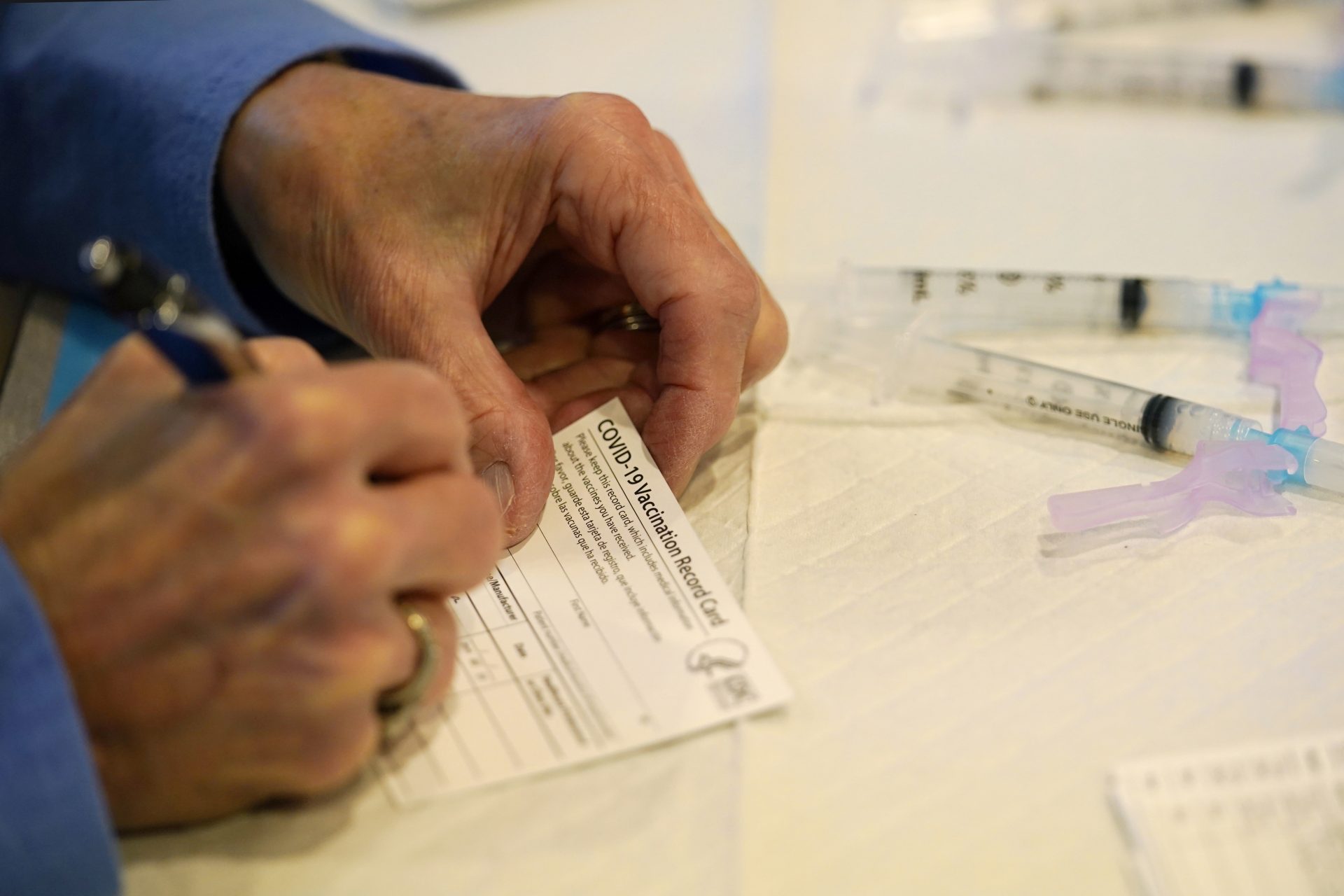 But Wolf said an increasing vaccine supply has put Pennsylvania in a much different position than it was in November, when the state and the rest of the country were heading into the pandemic’s darkest period. He predicted that anyone who wants a shot will have been able to receive at least an initial dose by the second week of May.

“The real race, the real end of this is going to be because enough people get vaccinated that we actually can get back to life pretty much as normal, and that’s the strategy we have,” Wolf said.

Facing a deadline set by President Joe Biden, the state recently expanded eligibility to more frontline workers and said that every adult in Pennsylvania will qualify for a COVID-19 vaccine starting April 19.

Pennsylvania received 440,000 first doses this week — the most since the vaccine rollout began in December — with pharmacies and the city of Philadelphia receiving hundreds of thousands of additional doses directly from the federal government. More than 44% of the state’s adult population has gotten at least one shot, according to the Centers for Disease Control and Prevention.

Even though demand still outstrips supply, state officials believe that vaccine hesitancy will soon become a bigger challenge. On Wednesday, Acting Health Secretary Alison Beam traveled to Allentown to highlight the work of the Muslim Aid Initiative, a volunteer group in the Philadelphia area that’s been encouraging Muslims to get vaccinated, and that of other groups working to address vaccine hesitancy in minority communities.

On the other side of the state, Wolf appeared with the Rev. Earlene Coleman, senior pastor of Bethlehem Baptist Church. She exhorted young people who might be reluctant to roll up their sleeves. 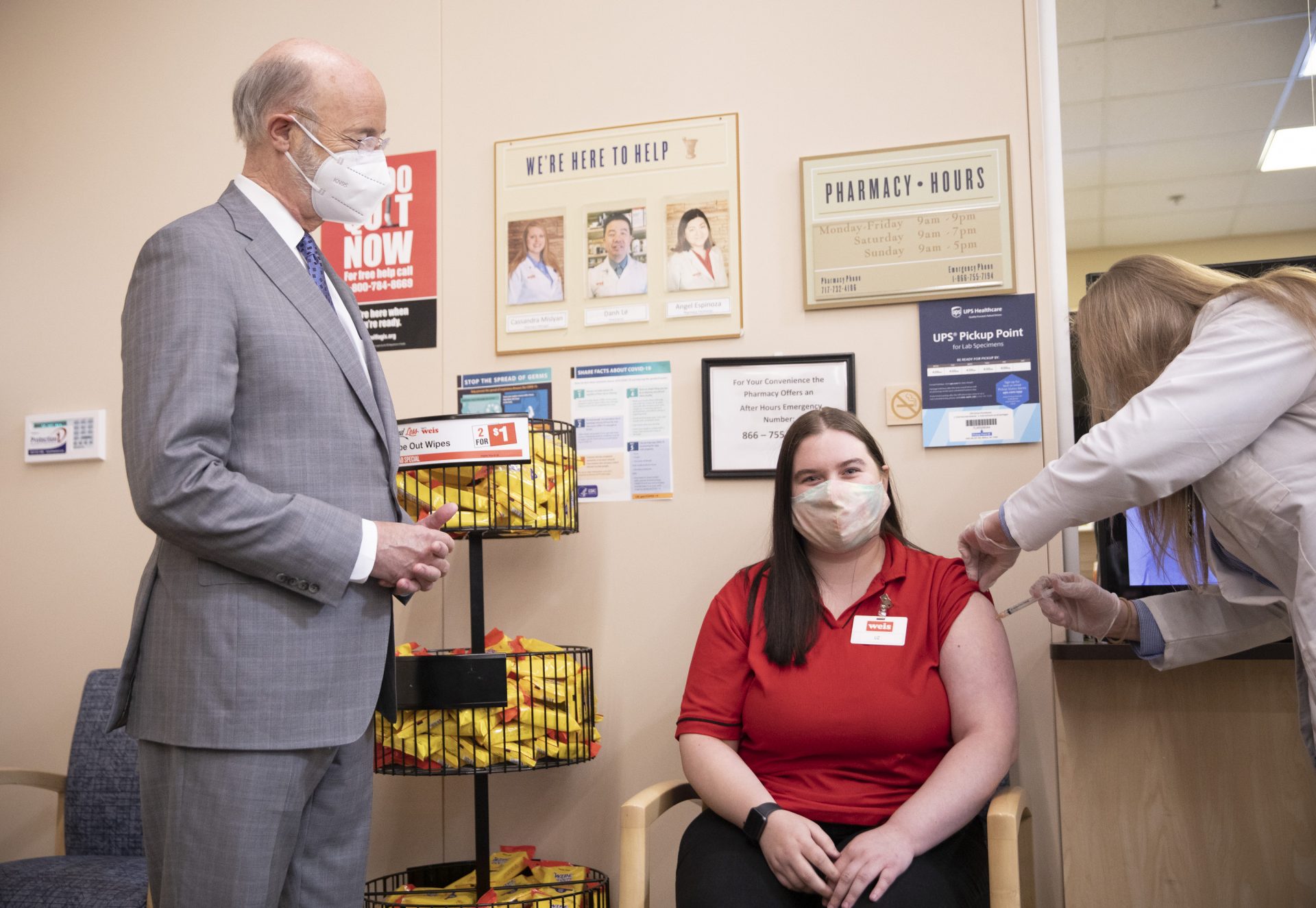 “Listen, learn, Google, all of that stuff that you do, and find out that this vaccine was not created overnight. There is such a thing as research, and research has been going on,” Coleman said. “So I need you to stand up and get your shots as well, amen?”

The race to vaccinate comes as Pennsylvania grapples with an increase in infections and hospitalizations.

New COVID-19 cases are up 38% in the last two weeks, to an average of about 4,200 per day. But state officials said Wednesday that the rate of increase appears to be slowing.

“We are once again reaching a plateau. It is a higher plateau than we would like to see, but that is certainly good news,” said Dr. Wendy Braund, who directs the state’s COVID-19 response.

‘A turning point’: Thousands in Pa. prisons will be offered COVID-19 vaccine