As NFL offseason heats up, Philadelphia Eagles looking at all options to add more QBs

“We have not been told to do anything other than to try to strengthen the football team." 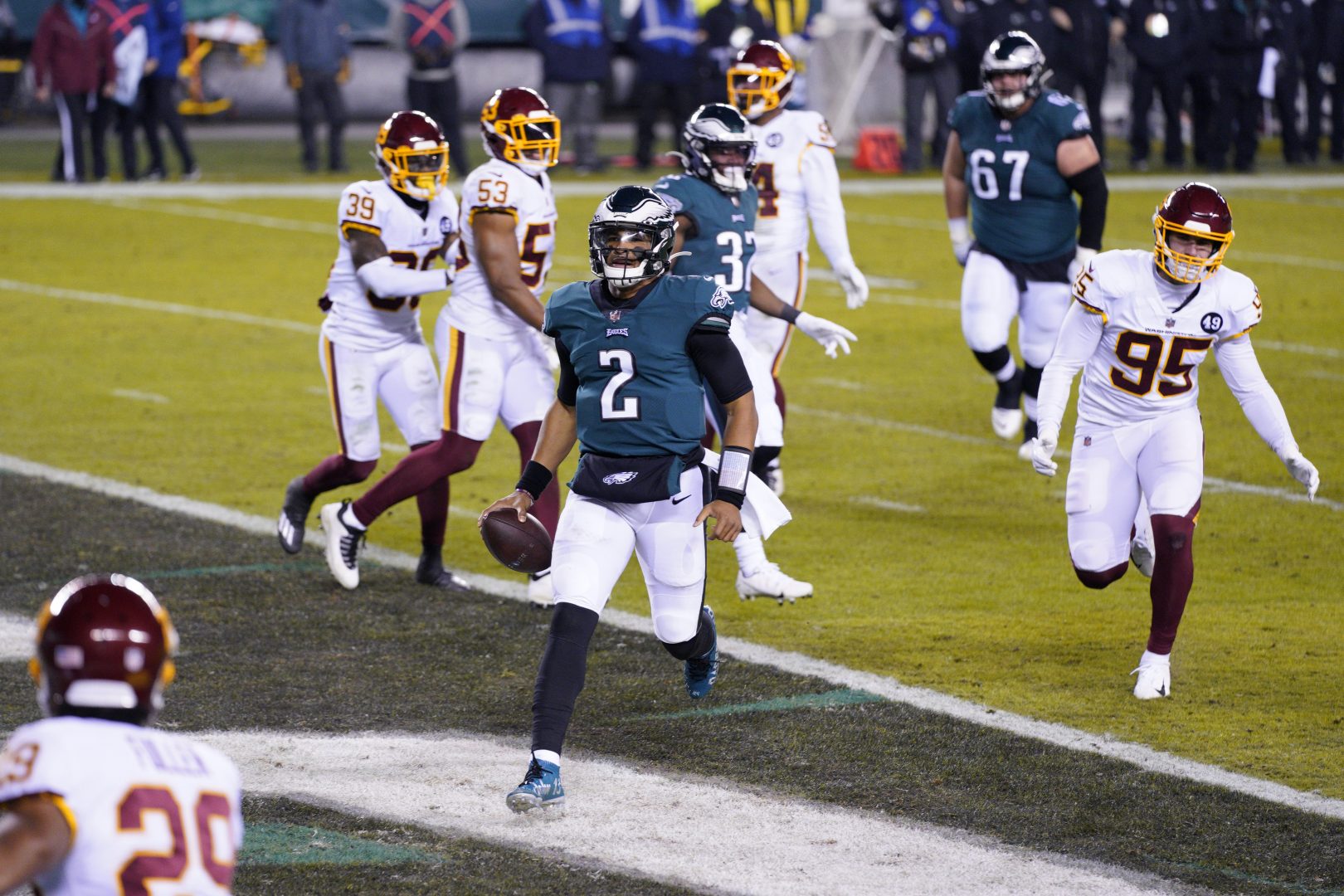 (Philadelphia) — Jalen Hurts is the only quarterback the Philadelphia Eagles have under contract so they’ll need to add a few more arms.

The main question is whether they draft a quarterback in the first round.

Hurts started the last four games last season and is expected to be the guy now that Carson Wentz was traded to Indianapolis. But general manager Howie Roseman didn’t rule out taking a quarterback with the No. 6 overall pick or trading up to get one.

“We have not been told to do anything other than to try to strengthen the football team and make sure that we’re doing the right things now and going forward,” Roseman said Thursday in response to a question about a report that owner Jeffrey Lurie instructed him not to draft a quarterback in the first round.

Hurts, a second-round pick last year, completed 52 percent of his passes for 1,061 yards, six touchdowns and four interceptions while going 1-3 on a 4-11-1 team. He ran for 354 yards and three scores.

“I think when people start talking about Jalen, the first thing that they go to is his athleticism and his strength as a runner. I don’t know that’s necessarily fair,” Roseman said. “This is a guy who completed over 70% of his passes at Oklahoma. He’s got a feel for the passing game. He’s got a plus arm. I think he’s going to continue to get better and better.”

New coach Nick Sirianni had three different starting quarterbacks in his three seasons as the offensive coordinator in Indianapolis. He sounds excited to work with Hurts. 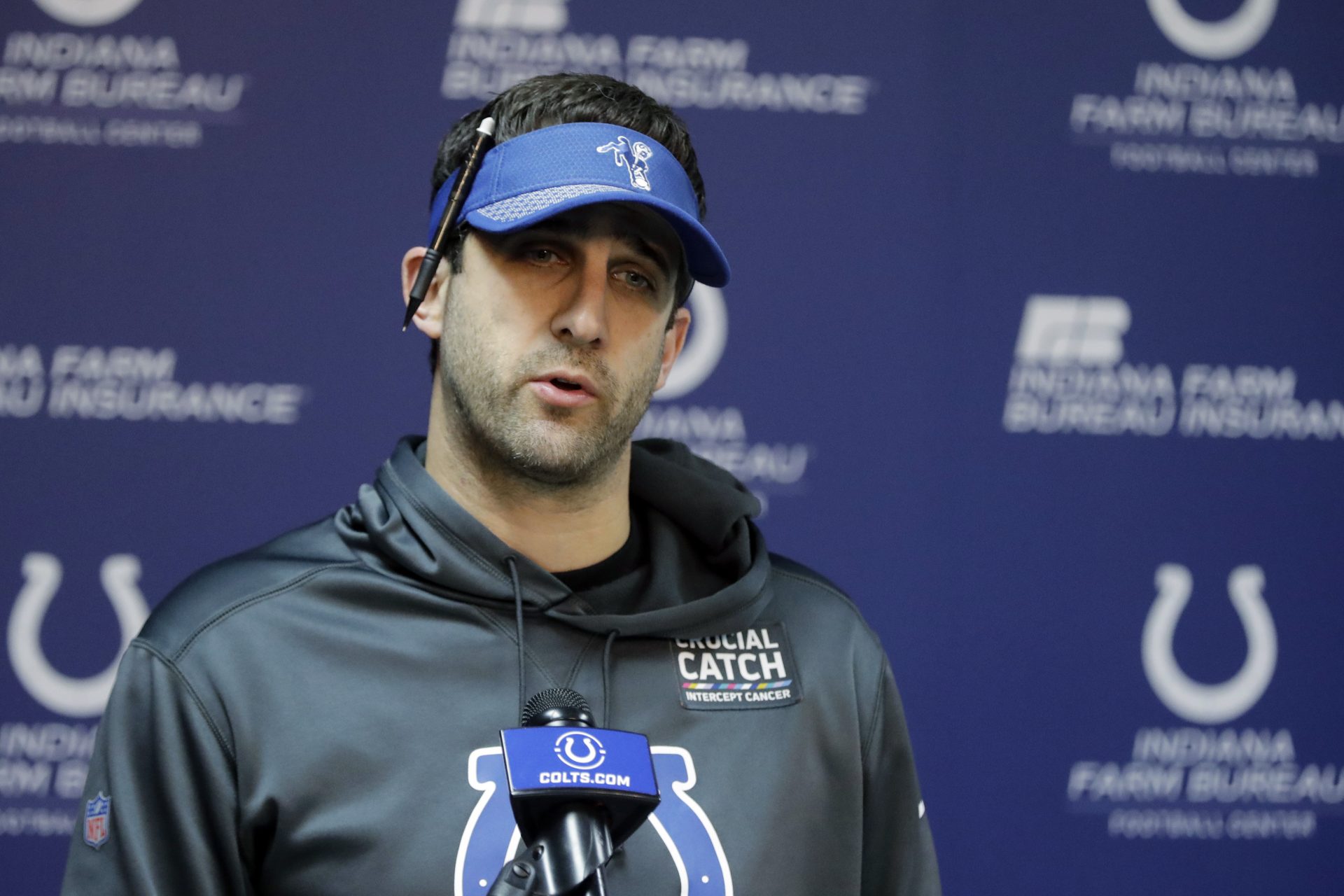 FILE- In this Wednesday, Jan. 2, 2019, file photo, Indianapolis Colts offensive coordinator Nick Sirianni speaks during a news conference at the NFL football team’s facility in Indianapolis. The Philadelphia Eagles are nearing a deal to hire Nick Sirianni to be their head coach, according to two people familiar with the decision. Both people spoke to The Associated Press Thursday, Jan. 21, 2021, on condition of anonymity because the team hasn’t officially announced the hiring. (AP Photo/Darron Cummings, File)

It’s more likely the Eagles will acquire a veteran backup and use one of their 10 other draft picks to select a No. 3 quarterback. However, anything is possible now that Wentz is gone less than two years after signing a $128 million contract extension.

“We want to have a really strong quarterback room,” Roseman said. “We feel like we have incredible coaches on the offensive side of the ball and the defensive side of the ball who can maximize quarterback play. We’re going to look at the free-agent market, the trade market, and we’re certainly going to look at the draft to try to strengthen that position.”

The Eagles have been quiet in free agency after restructuring several contracts to get under the salary cap. They released wide receivers Alshon Jeffery and DeSean Jackson and defensive tackle Malik Jackson. They signed safety Andrew Adams, who played mostly special teams with the Super Bowl champion Buccaneers in 2020.