An illustration of what the novel coronavirus first reported in 2019 would look like if it was made of Legos.

What’s going on with all these coronavirus variants? An illustrated guide 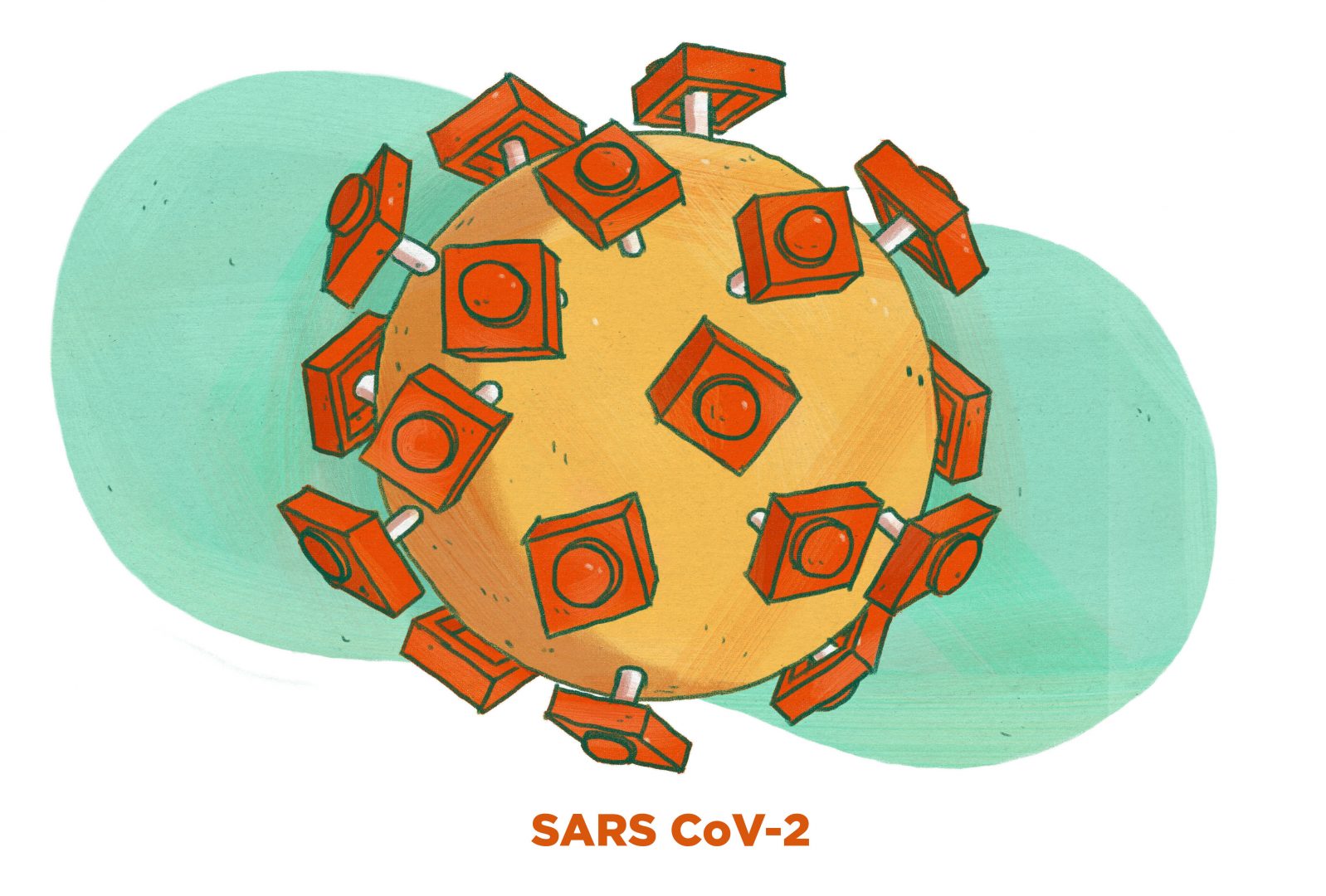 An illustration of what the novel coronavirus first reported in 2019 would look like if it was made of Legos.

OK. So what in the heck is going on with all these variants? Why is everyone so worried? And how do they work?

To answer these questions, let’s go back in time to January 2020, when we were all blissfully going about our lives, eating in restaurants, cramming into elevators at work and dancing at house parties on the weekends.

Back then, the coronavirus looked a bit like this (well, not really, but if it was made of Legos, it would look like this). 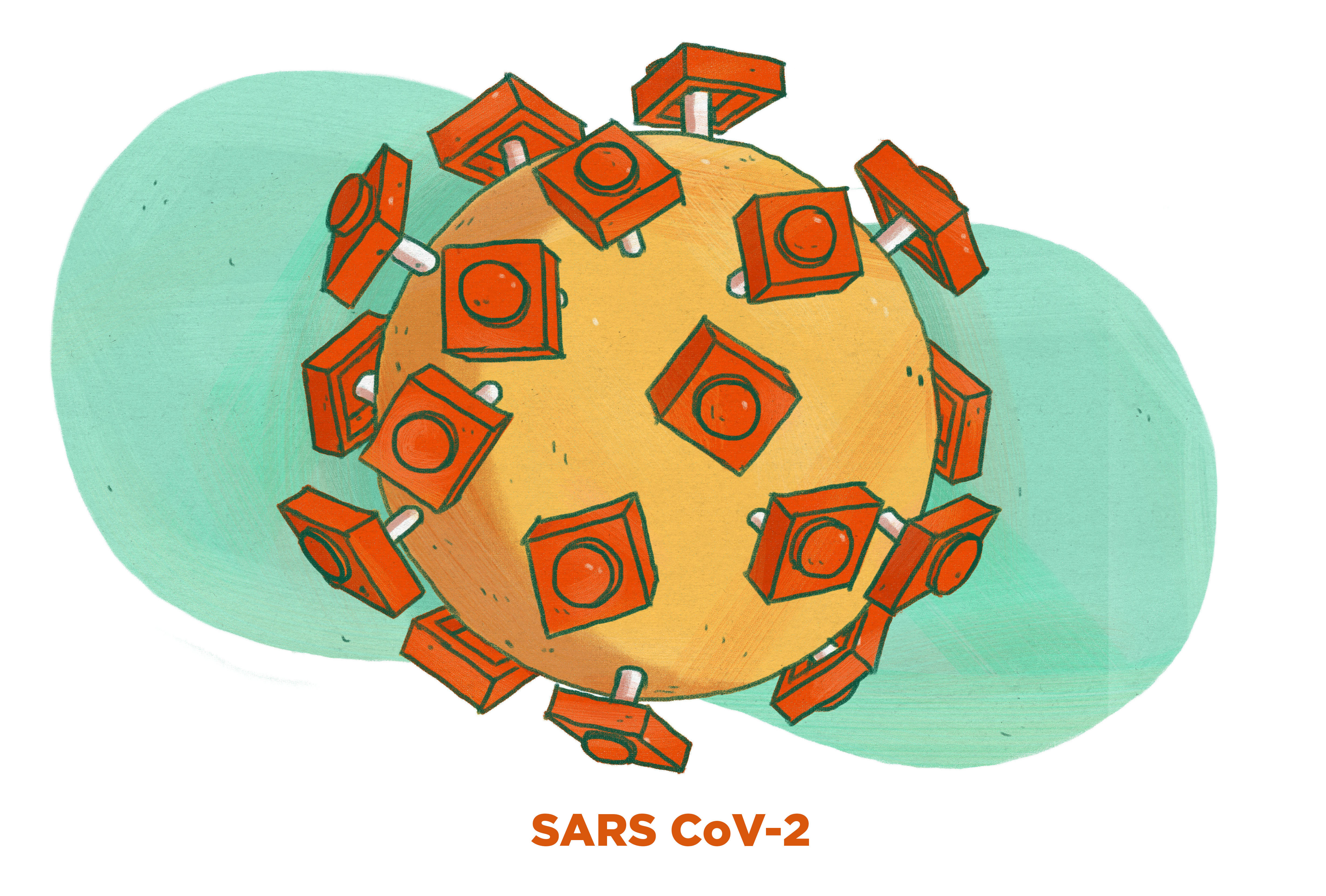 The virus is basically a ball with little “spikes” on the surface poking out. 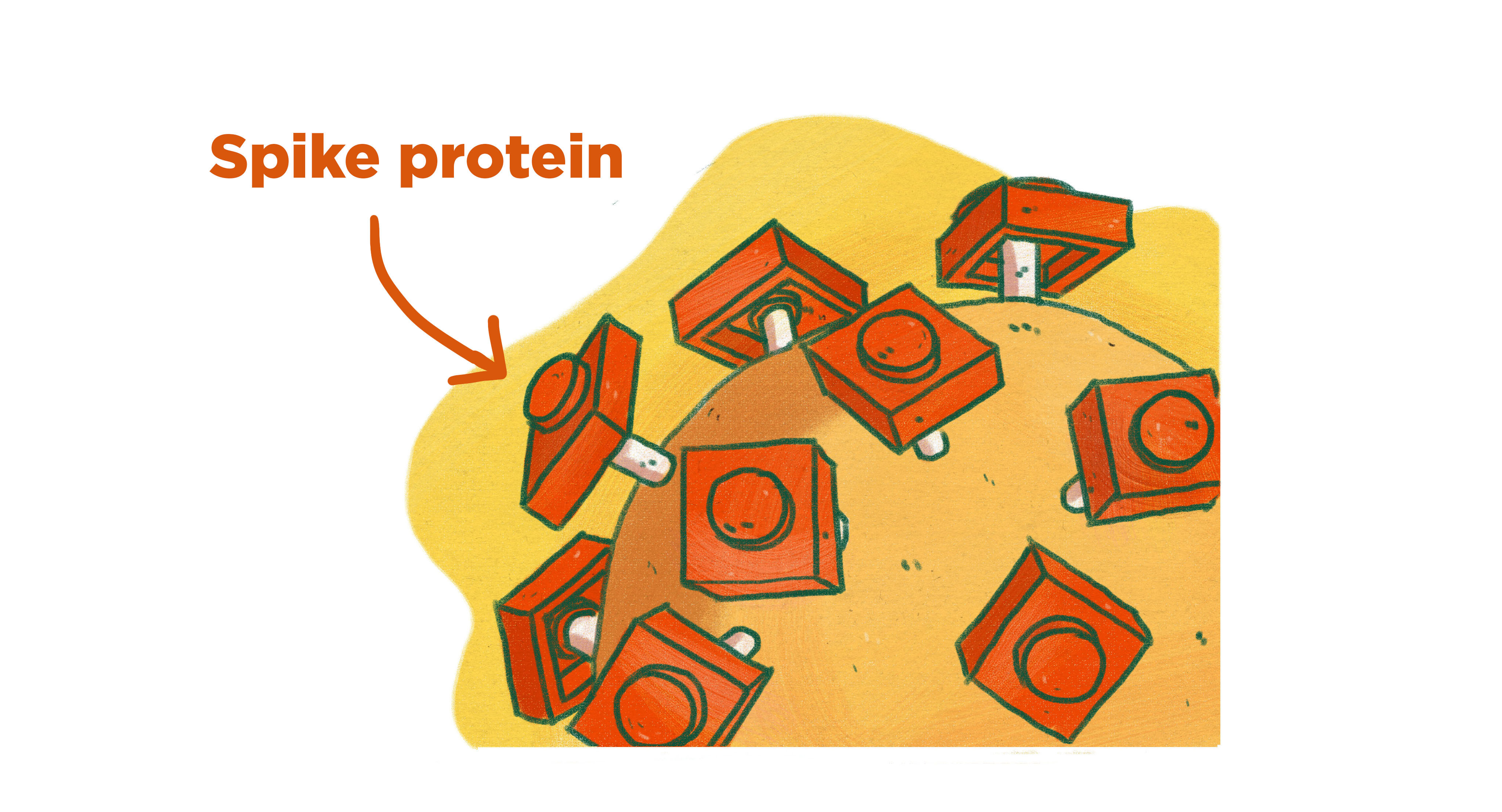 Now, our cells aren’t stupid. They don’t just let any virus inside willy-nilly. Not in the slightest. The cell actually goes to great lengths to keep intruders out. For anything to enter, the intruder must figure out a way for its spike to bind to another spike on the cell’s surface. You can think of this binding as a secret handshake. The handshake tells the cell, “Oh, it’s OK. We can let this guy inside.”

That’s exactly what SARS CoV-2 has done. Sometime in 2019, probably in China, SARS CoV-2 figured out a way to interact with a specific “spike” on the surface of human cells, called ACE2. This interaction wasn’t perfect. The spike and the ACE2 didn’t fit together perfectly. 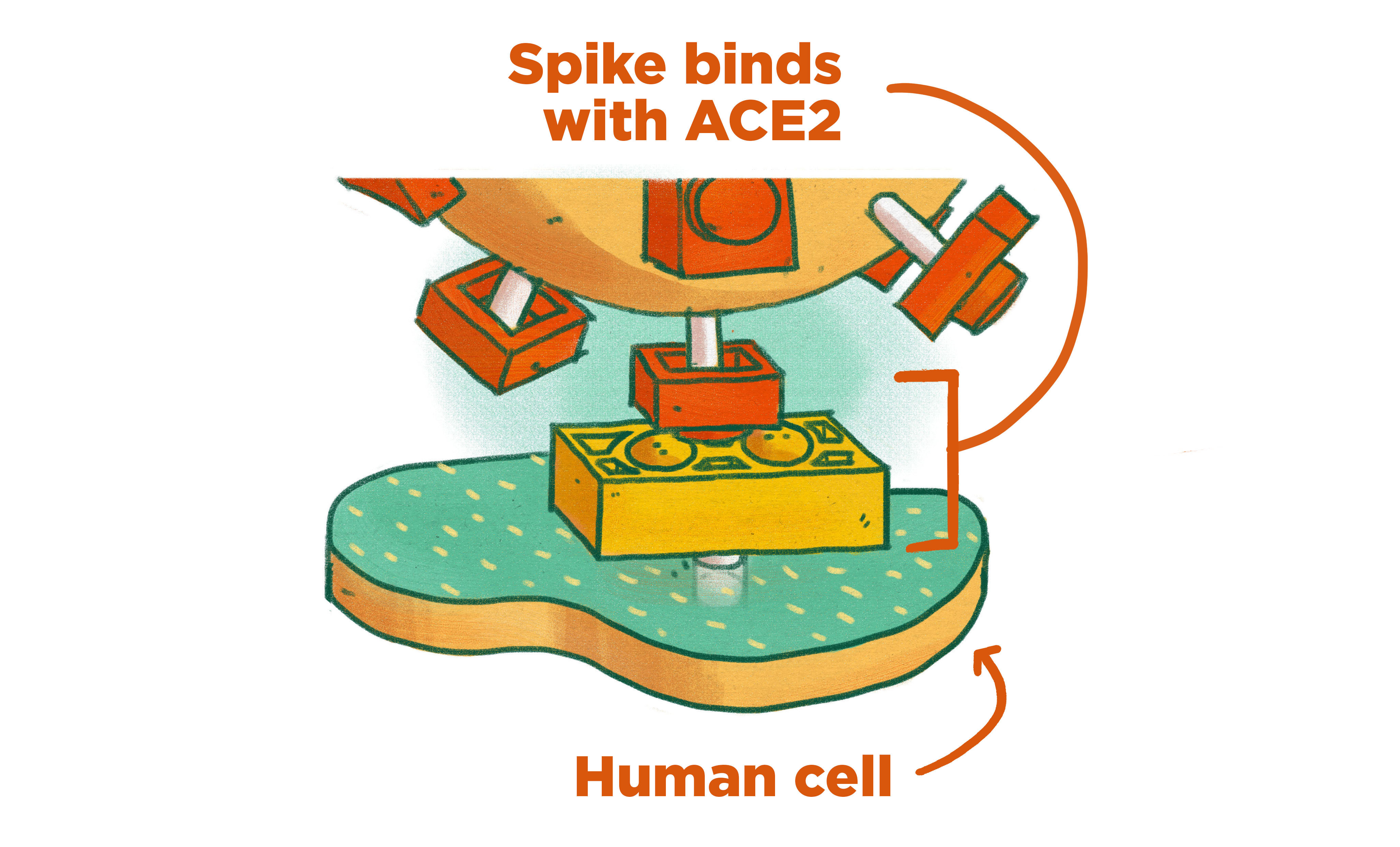 But the binding was good enough to trick the ACE2 receptor. And ACE2 — mistakenly — told its cell, “Hey cell, this guy is friendly. You can let him in.”

Ooooh. Big mistake. With that one mistake, ACE2 pretty much gave the cell a death sentence (and the world a pandemic). Once the virus was inside, it made a bunch of copies of itself, busted the cell wide open and released new virus particles inside the blood, which went out and found another cell to infect.

During this time, the body isn’t standing by idly letting this attack occur. Oh, no. The immune system is already preparing a counterattack. In particular, it’s manufacturing antibodies. Some of those antibodies act like little caps that stick to the ends of the virus’s spike, like this. 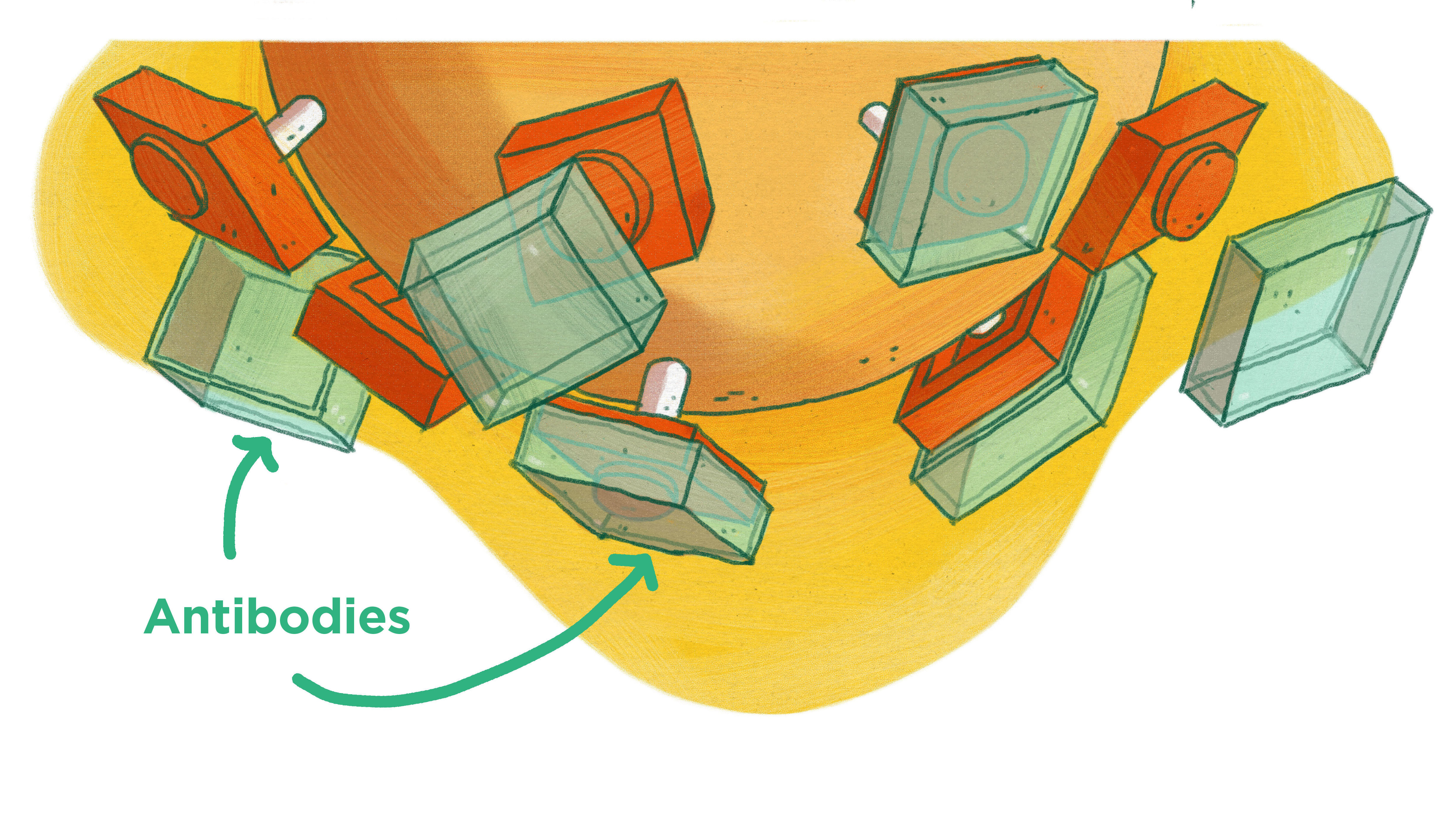 Once “capped,” the spikes can no longer stick to the ACE2 receptor. Goodbye, binding! Goodbye, secret handshake! And goodbye, entry into the cell! The cells are saved. The infection can’t move forward, and the body wins!

That was pretty much how coronavirus infections played out for nine months or so, from January 2020 to about September 2020. Then … the virus got crafty. And the pandemic began a new phase.

Everytime the virus copies itself inside a cell, it has the chance of mutating, or changing its genes slightly. Most of the mutations are actually harmful to the virus. They disable it. So these mutations disappear. And the regular coronavirus continues on its mission to find new cells to infect.

But every so often, the virus happens upon a set of mutations that actually help the virus. 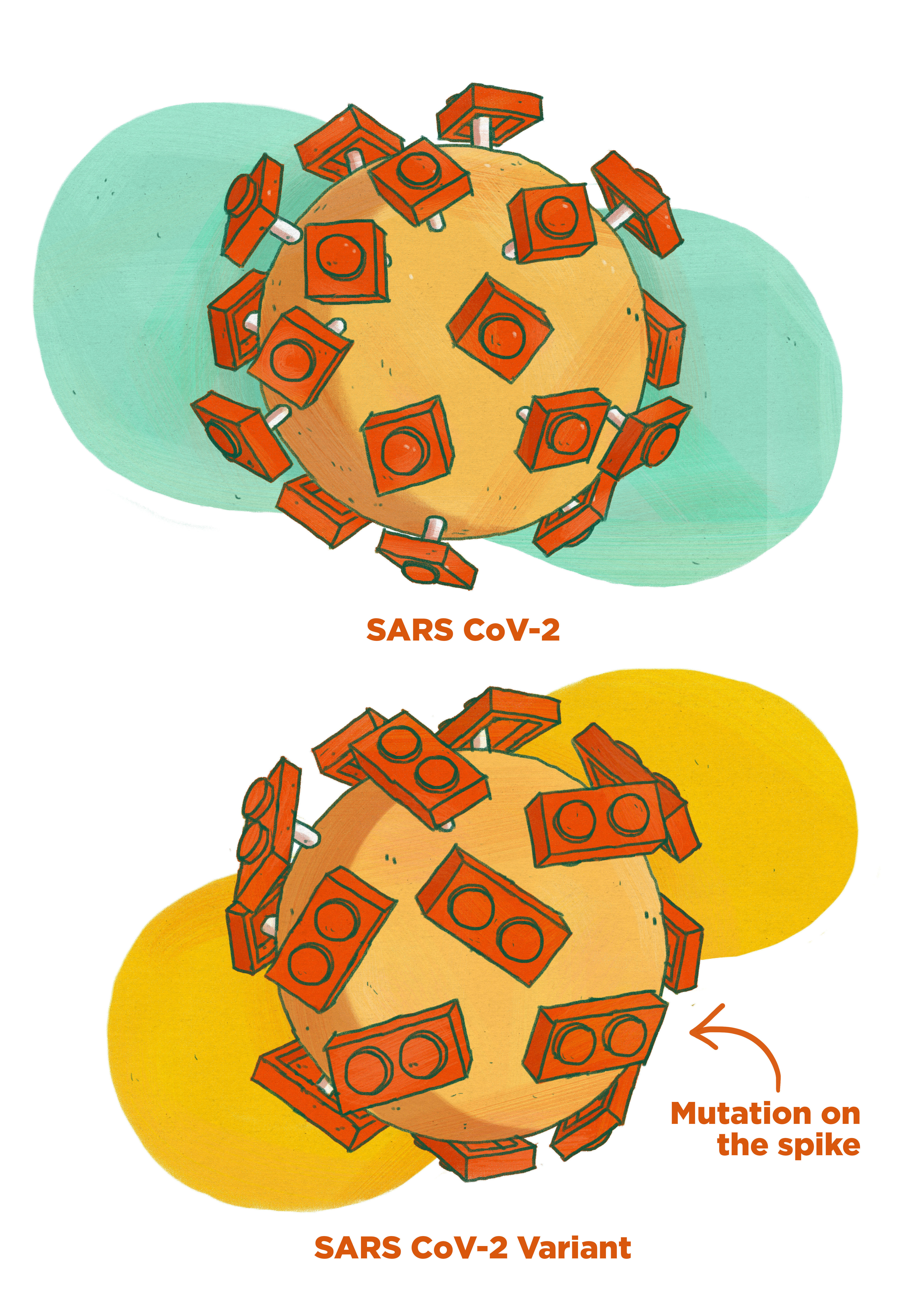 In the case of the new variants, the mutations change the shape of the virus’s spike in a particular way — so that it fits better to the ACE2 receptor. So the spike can bind more tightly to the cell or more quickly.

The result? A person’s cells get infected more easily — or more of their cells let the virus inside. We don’t really know why, but that person may make more virus particles inside their nose and upper respiratory system. So when they sneeze, cough or just talk, they expel more virus. And that’s likely why the new variant is more contagious.

But wait, what about the antibodies? What about the little caps on the spike? Aren’t they coming to save us again?

Turns out, for the variants from South Africa and Brazil, the mutations change the shape of the virus’s spike in a way that’s double trouble for the cell. The new shape that helps the virus bind more tightly to ACE2 also prevents some of the antibodies from sticking to the spike. Some antibodies no longer fit well to the end of the spike, so they can’t form the little caps that block viral infection. The virus is free to bind to ACE2. 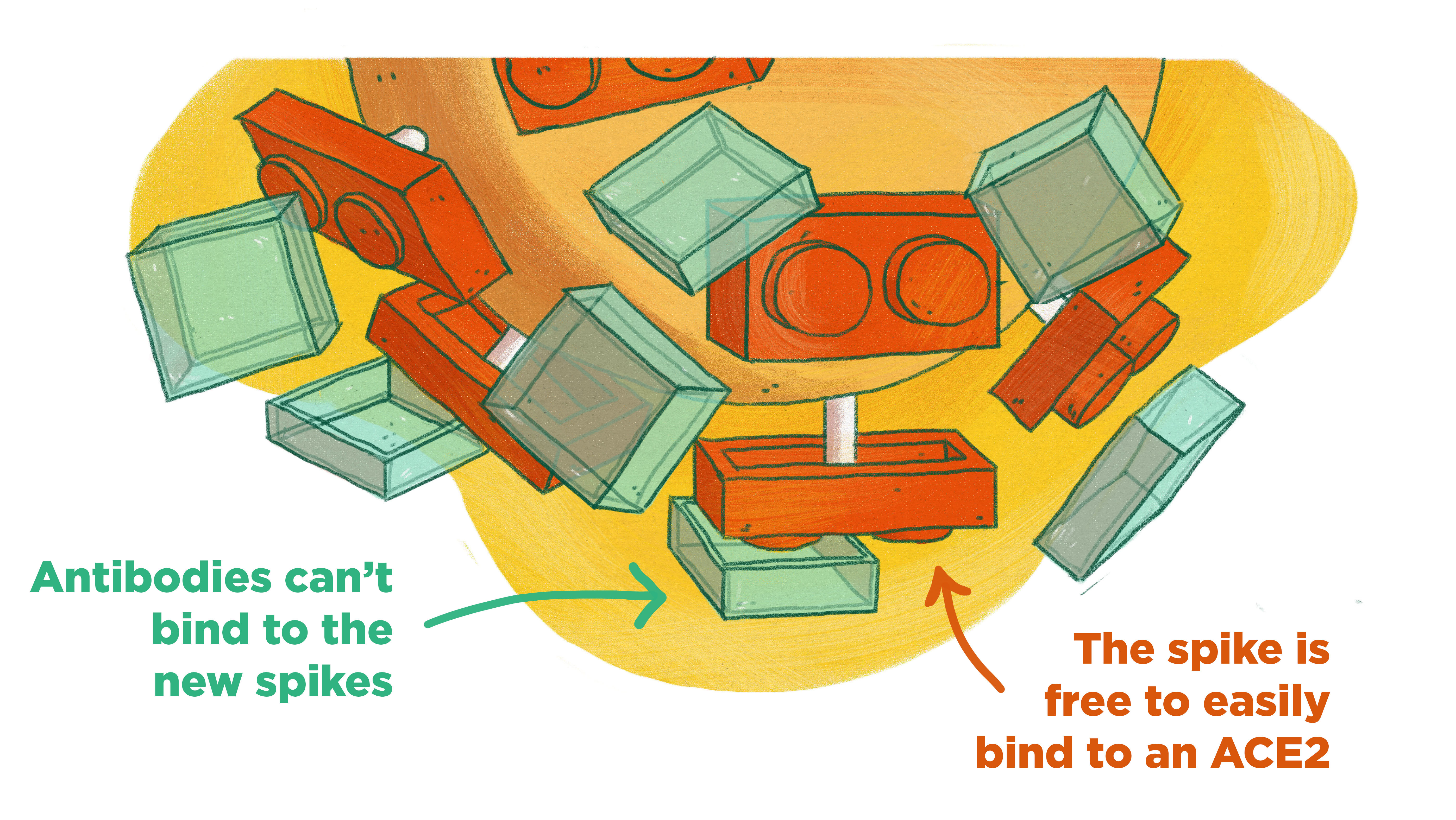 As scientists say, these mutations help the virus “evade the immune system.” So a person who was infected with the older version of the virus last year may not be protected as well against these new variants. And that person may be more likely to be reinfected.

Now, antibodies are a diverse crew. They come in a lot of different shapes that can bind to a lot of different parts of the virus. Some antibodies don’t bind right at the end of the spike but along the edges, along the white sticks. Some antibodies don’t even bind on the spike at all, but rather, on another surface of the virus. All of these other antibodies can help take down the virus and reduce infections. So even though some antibodies become less useful, hopefully, others will take up the slack and still get the job done — or at least, stall the infection long enough so the body can make new antibodies that fit perfectly on the mutated spike.

COVID-19 vaccine: Will it protect against new variants and do you need a 2nd dose?