Pittsburgh Steelers quarterback Ben Roethlisberger (7) sits on the bench next to center Maurkice Pouncey (53) following a 48-37 loss to the Cleveland Browns in an NFL wild-card playoff football game in Pittsburgh, Sunday, Jan. 10, 2021.

End of an era? Steelers facing big questions after loss

Thee optimism of an unbeaten run through November faded into the reality of another playoff cameo in January. 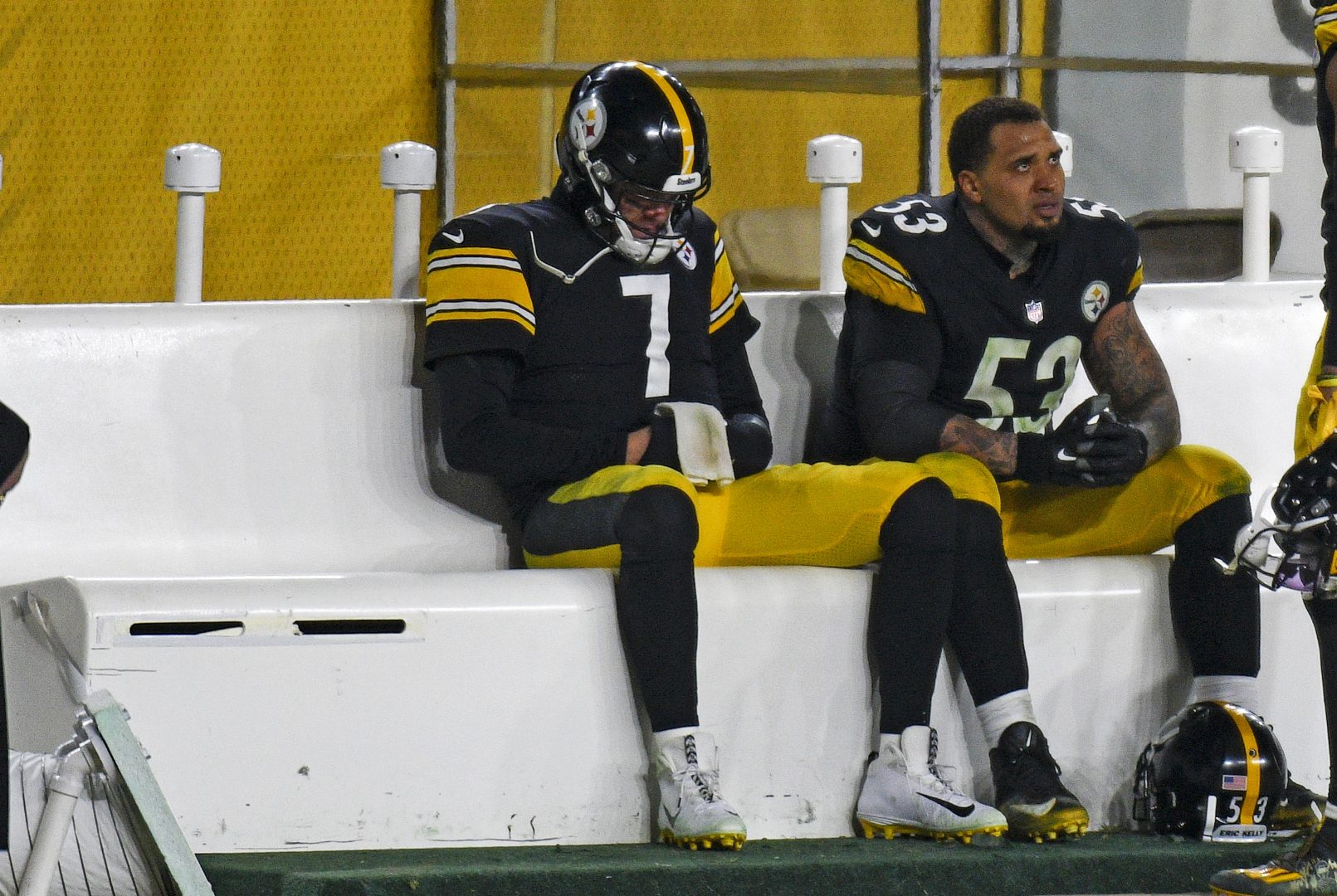 Pittsburgh Steelers quarterback Ben Roethlisberger (7) sits on the bench next to center Maurkice Pouncey (53) following a 48-37 loss to the Cleveland Browns in an NFL wild-card playoff football game in Pittsburgh, Sunday, Jan. 10, 2021.

(Pittsburgh) — Ben Roethlisberger and Maurkice Pouncey sat on the bench, their 11th season together over. Their future uncertain. Their pain obvious.

The end of the 2020 season wasn’t supposed to come so quickly. Yet it barreled down on the Pittsburgh Steelers from the first snap of a 48-37 wild-card loss to Cleveland on Sunday night, the one that Pouncey sent sailing over Roethlisberger’s head and into the end zone. Cleveland’s Karl Joseph fell on it for a touchdown.

The mistakes, the one the Steelers had either avoided or survived during their 11-0 start, rapidly piled up. One Roethlisberger interception became two. Then three. Then eventually, four. A seven-point deficit quickly ballooned to 28. And the optimism of an unbeaten run through November faded into the reality of another playoff cameo in January. 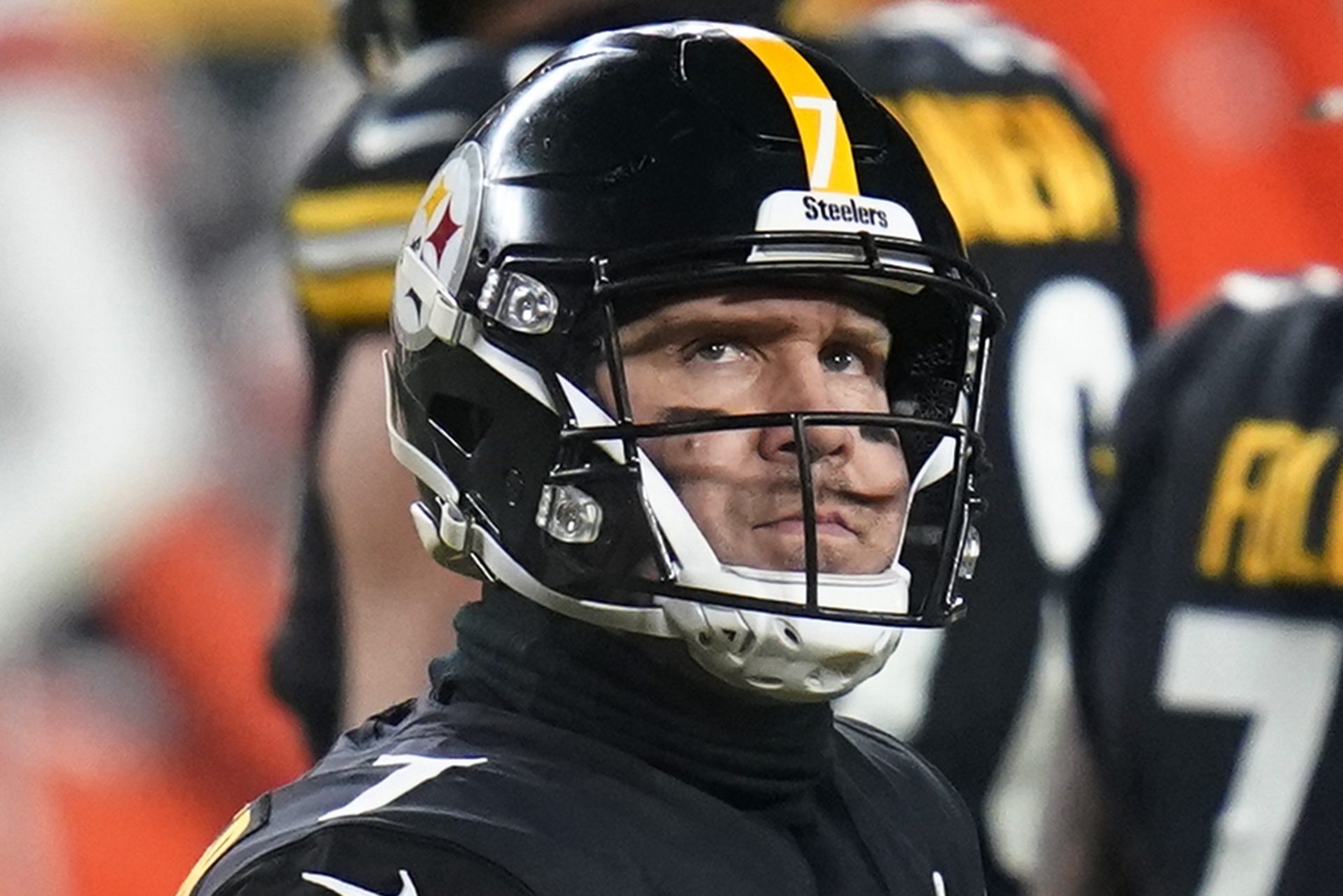 Pittsburgh Steelers quarterback Ben Roethlisberger (7) looks a the scoreboard as he walks off the field during the first half of an NFL wild-card playoff football game against the Cleveland Browns, Sunday, Jan. 10, 2021, in Pittsburgh.

Three years ago, the Jaguars came into Heinz Field and stunned the AFC’s second seed. This time, it was the resurgent Browns — making their first postseason appearance in 18 years — who provided the unexpected whipping. Cleveland players ran off the turf shouting “Same Old Browns” knowing they looked anything but while the 38-year-old Roethlisberger and the 31-year-old Pouncey pondered what comes next.

“I hated that it ended the way it did,” Roethlisberger said. “I wanted to win it for him.”

Asked to clarify what was ending, Roethlisberger stressed it was just the season. Maybe, but there’s a very real chance that a major shift is on the way for a franchise that typically does little more than tweak.

“We are in uncharted territory, to say the least,” defensive end Cam Heyward said. “Changes have to be made.”

The Steelers (12-5) hoped to put off the tough questions about what direction the club will head in 2021 for at least a month. Instead, they’re here following a historic playoff meltdown. Cleveland’s 48 points were the most ever allowed by the Steelers in the postseason. The defense that led the NFL in sacks for a fourth straight year and has a regular-season sack streak that dates back to 2016 failed to take Mayfield down once.

“It was all terrible out there,” Heyward said.

The offense that sputtered so much during the second half of the year didn’t spring to life until the Steelers trailed by 28. By then it was too late. The closest Pittsburgh got to making it competitive came on the first play of the fourth quarter. Facing fourth-and-1 at the Pittsburgh 46 and down just 35-23, head coach Mike Tomlin opted to punt.

“I wanted to pin them down and maybe provide a short field for their offense,” Tomlin said. “I just wanted to keep the momentum going in terms of field positioning.” 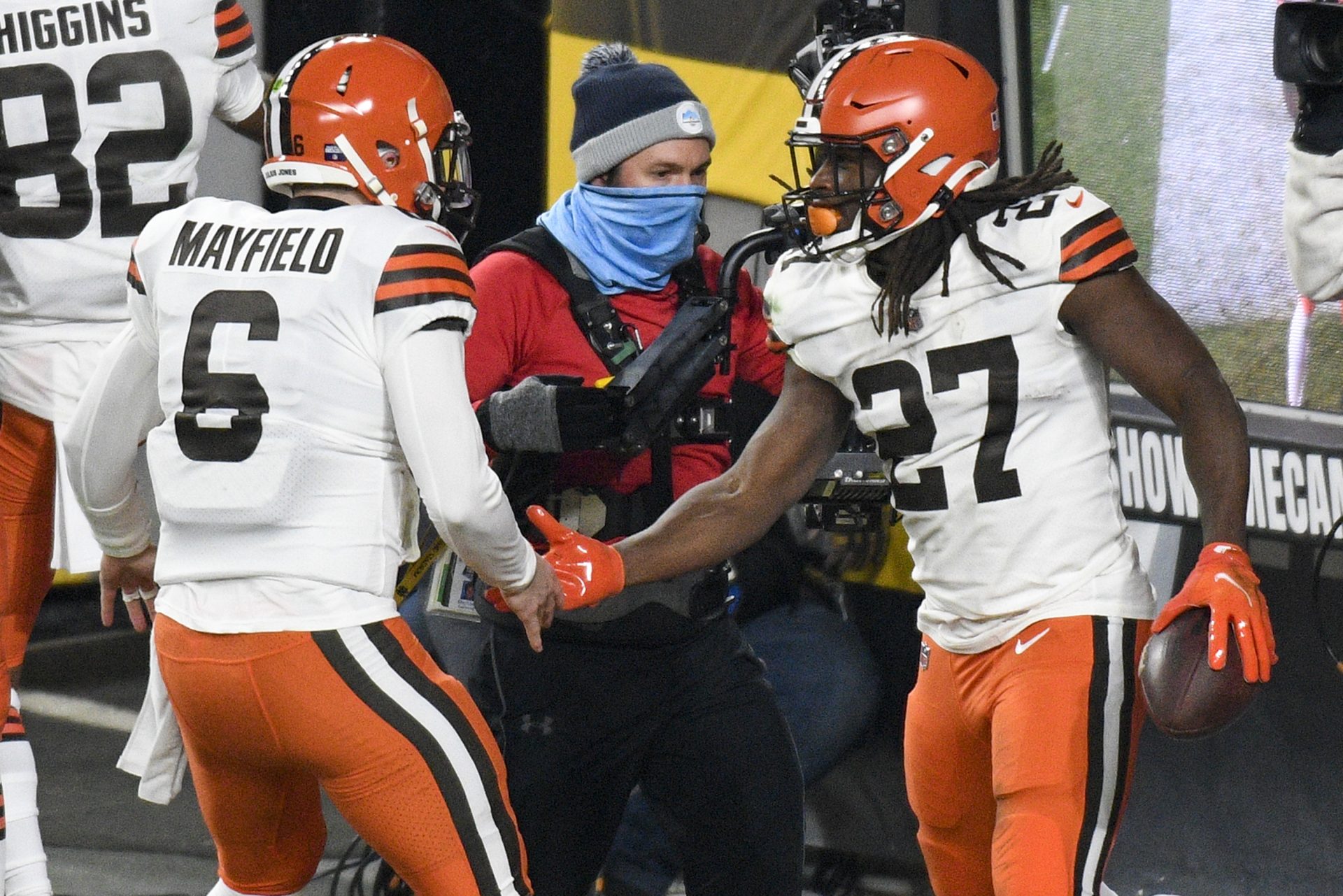 Cleveland Browns running back Kareem Hunt (27) celebrates with quarterback Baker Mayfield (6) after scoring on an eight-yard run during the first half of an NFL wild-card playoff football game against the Pittsburgh Steelers in Pittsburgh, Sunday, Jan. 10, 2021.

Like just about everything else the Steelers tried at a sparse Heinz Field, it didn’t work. Jordan Berry’s kick hit at the 2 and trickled into the end zone. Mayfield quickly guided the Browns 80 yards and the deficit was back up to 19. Roethlisberger’s final pick with 3:16 remaining sealed it.

“Obviously you can’t turn the ball over and it kills your team, kills your chances,” Roethlisberger said.

The question is what comes next? Roethlisberger set an NFL playoff record by completing 47 passes. His 501 yards were the second-most ever in the postseason. A year removed from right elbow surgery, he led the Steelers to an AFC North title and threw it over 600 times.

Tomlin believes Roethlisberger can still play at a high level. So does the only constant he’s had in his 14 seasons on the job. The list of factors Roethlisberger will take into account while trying to decide whether to return next spring isn’t short.

“A lot of praying, a lot of talking,” Roethlisberger said. “I still have a year left on my contract. I hope the Steelers want me back if that’s the way we go.”

The economics, however, are tricky. Roethlisberger has a cap hit of over $41 million next year, nearly a quarter of the entire salary cap. The teams the Steelers are competing with in the AFC all have quarterbacks who are far younger and — with the exception of Kansas City’s Patrick Mahomes — far cheaper. That flexibility gives them chances to spend money elsewhere. The Steelers might not have that luxury.

Outside linebacker Bud Dupree, wide receiver JuJu Smith-Schuster, running back James Conner and left tackle Al Villanueva are all impending free agents, among others. The holes on the roster Pittsburgh will have to fill next season could be many whether Roethlisberger returns or not.

It was a discussion they hoped to put off for as long as possible. As Roethlisberger and Pouncey got up, slowly walked off the field and into the tunnel, that discussion is now here.

“It’s tough to lose guys in our locker room who have done great things on and off the field,” Heyward said. “And you know, that unknown just kills me. To squander an opportunity like that and to know we didn’t play our brand of football.”